Intracavernosal pressure recording (ICP) is an important method to evaluate the erectile function of experimental animals. Here, a detailed protocol is demonstrated for the recording procedure of ICP by catheterizing the crura penis and then electrically stimulating the cavernous nerves in rats.

Erectile dysfunction (ED) is defined as the inability to attain or keep an erection of the penis, and this has become a prevalent male sexual disorder. Rodents are employed by many studies to research the physiology/pathology of erectile function. Erectile function in rodents can be evaluated by measuring the intracavernosal pressure (ICP). In practice, ICP can be monitored following electrical stimulation of the cavernous nerves (CNs). The arterial pressure of the carotid artery (the mean arterial pressure) is used as the reference for ICP. Using ICP recording protocols, many key parameters of erectile function can be measured from the ICP response curve. The ICP measurement provides more information than the apomorphine-induced penile erection test, and is cheaper than telemetric monitoring of the corpus spongiosum penis, making this method the most popular one to evaluate erectile function. However, compared to the easily-performed APO-induced erectile function test, successful ICP recordings require attention to detail, practice, and adherence to the operation method. In this work, an introduction to ICP recording in rats is provided to complement the procedure efficiently.

ED is defined as the inability to attain or keep a penile erection, and has become a common male sexual disorder1. Experimental animals are used and provide reproducible models to investigate erectile function2. For a long time, several larger animal models have been employed for investigating erectile function3,4,5. Although rodents are relatively small compared to other animals, they are also used for the study of male erectile dysfunction due to exhibiting several advantages6. First, the morphological and functional sexual characteristics of humans are recapitulated in rodents. Second, compared to larger animals used in ED studies, rodents are more economical to purchase, house, and maintain. Third, genetically modified rodent models provide advantages in reproducible and subsequent behavioral as well as neurophysiological studies. Therefore, rodents have quickly become the primary animals used in the study of male erectile dysfunction.

Benefiting from a pure genetic background and consistent culture conditions, rodent models have provided consistently reproducible data5,6,7,8. Among the numerous available studies related to many aspects of erectile functions, the apomorphine (APO)-induced erectile response test and the electric-stimulation-induced ICP response test are the most widely used methods that reliably reflect erectile function9,10,11,12. The APO-induced erectile function test, developed by Heaton et al.13, is a bio-assay that utilizes the phenomenon that administration of apomorphine to rats elicits erections and yawns. As an easy, noninvasive, and stable bio-assay to evaluate erectile function, the APO-induced erectile function test is widely used in many studies. However, this assay does not adequately reflect the quality of erections or the dynamic changes in blood flow associated with an erectile response14. ICP measurements were initially developed by Quinlan et al.15. In this method, a catheter is placed into the carotid artery to measure systemic blood pressure, and another catheter is inserted into the crus corpus cavernosum to record the ICP. Before or during the ICP recording, a vasoactive agent and/or electrical field stimulation of the major pelvic ganglion (MPG) or CN were often given to the rats14. This assay has been a reliable tool for evaluating the therapies and medicines for ED, and will likely be used as a vital evaluation method in the future6.

Compared to the easily-performed APO-induced erectile function test, successful ICP recordings require attention to detail, practice, and adherence to the operation method. Therefore, here, we provide a detailed description of how to perform ICP recording.

Three-month-old and 18-month-old Sprague-Dawley rats were used in the present study. All animals were handled in accordance with the NIH Guidelines for the Care and Use of Laboratory Animals. Procedures involving animal subjects were approved by the local Institutional Animal Care and Ethics Committee, with an effort to minimize animal suffering. The protocols were approved by the Institutional Animal Care and Use Committee (IACUC) at Nanjing Tech University (Nanjing, China).

The rats were divided into two groups according to their age and preliminary performance in the APO-induced erectile function test prior to ICP recording: the young normal group (YN group) and aged erectile dysfunction group (AE group)10.

Numerous studies have shown that erectile dysfunction in aged males is becoming a common problem. However, medical treatment is limited in the management of aging-related ED16. In rodent models of aging-related ED, many therapies are tested on the erectile function of aged rats. As we have introduced above, the ICP recording test could be used to distinguish the ED animals from the total population of experimental animals, which is also valuable to quantify the effect of potential treatment or drugs on erectile function.

As illustrated in Figure 3A, the typical ICP response curve of the ED group (Aged ED rats, AE, 18-month-old) was much lower than the control group's curve (Young normal rats, YN, 3-month-old). Usually, the highest ICP was chosen for statistical analysis. After calculating the ratio of ICP/MAP, the pooled data from 5 rats showed that the ICP/MAP ratio in AE group also decreased significantly compared with that in control groups (Figure 3B). Besides these two key parameters, the peak ICP, the plateau ICP, the detumescence time, the duration of response, and the area under the curve all significantly decreased in aged ED rats (Table 1). These ICP recording data provide a quantitative measurement method to reflect erectile function. 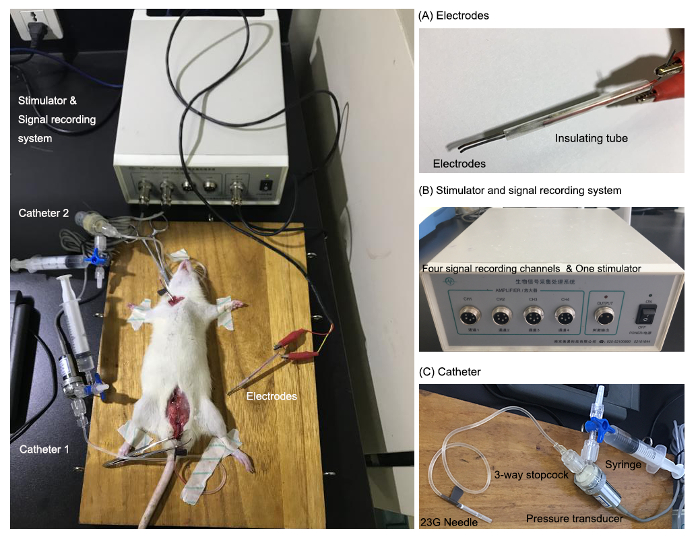 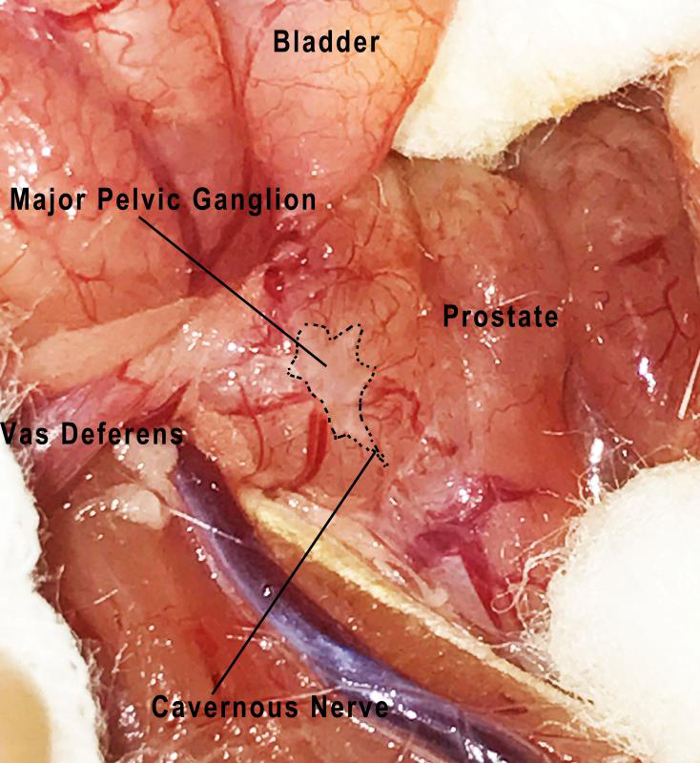 As a direct measure of erectile function, ICP is a reliable method14. It allows for the acquisition of data on basal ICP, peak ICP, plateau ICP, time to erection and detumescence time, duration of response, etc. Besides these direct measured parameters, there are some other index parameters: (1) "T80", the time to reach 80% of peak ICP; (2) "D20", the time to decrease to 20% of peak ICP; (3) "ΔT80", the rate of increase in pressure (per second) at T80; and (4) "ΔD20", the rate of decrease in pressure (per second) at D20. These parameters allow for the quantification of each stage and the quality of the ICP response, which can reflect the impact of disease and examine the efficacy of the drugs14,17. This ICP recording method is widely used in ED animal models. In this protocol, we compared the ICP response in young and aged ED rats. If administration of drugs via intracavernous catheter is needed, it could be done by placement of another intracavernous catheter into the contralateral crus corpus cavernosum17. The total volume of injection should be less than 0.1 mL. Systematic drug administration can be performed via intraperitoneal or subcutaneous injection. If intravenous administration is needed, the right jugular vein could be considered.

Although ICP surgery is slightly technically challenging and requires an in-depth understanding of lower abdominal and pelvic organs anatomy, with time and effort one can master the protocol. Since the catheters and electrodes are manually made by the experimenter, the pressure transducer needs to be checked and calibrated every time before starting the experiment. The electrodes should be thin and the distance between the two electrodes should be small enough to stimulate the nerve efficiently. It is important to avoid stretching or other damage to the nerve while placing the electrodes. It is critical to precisely insert the needle into the left crura, without any sliding or dropping off. Three common symptoms are listed in Table 2, which could be considered when some symptoms occur.

This ICP recording method is also transferrable to mice. Nevertheless, the bodies of mice are smaller than rats, making ICP recording in mice harder. If ICP recordings were conducted in mice, smaller sized hypodermic needles could be used.

ICP recording also has its limitations and other methods may be considered. Usually, the ICP recording surgery is performed on anesthetized animals, and the animals are sacrificed after short-term ICP measurement, which is not suitable for longitudinal monitoring of ICP. A significant improvement of direct ICP recording method is performing ICP recordings on conscious, freely moving rats, which is well-described in the protocols written by Hedlund et al.17 This method provides an opportunity to record the intracavernosal pressure for longer periods of time. Recently, advancements have been made to include a telemetric approach applied in conscious, freely moving animals18,19,20. Although the telemetric approach has many advantages over traditional ICP recording, it requires expensive equipment to convert and receive the converted pressure signals. For overcoming the catheterization method, Adachi et al. describe a way to examine erectile responses by continuous measuring of the diameter of penises in rats21. In this method, a pair of piezoelectric crystals is placed to the shaft of the corpus cavernosum penis. Two parameters are defined to evaluate the erectile response: (1) "D-max": the maximal developed penile diameter during measurement; and (2) "T50%": the time from the maximum response to 50% recovery of the maximum response in anesthetized rats. With this protocol, the changes of the diameter of the penis also faithfully reflect the quality of erectile response; furthermore, the tissue is not injured during the entire measurement. However, like the telemetric approach, this sonomicrometry method also requires specific and relatively expensive equipment to convert and receive the diameter changes of the penis.

In summary, ICP recording is an accurate, relatively convenient, and inexpensive method. We believe this introduction can help extend the use of ICP method, and further advance knowledge of the pathology and physiology of erectile dysfunction. 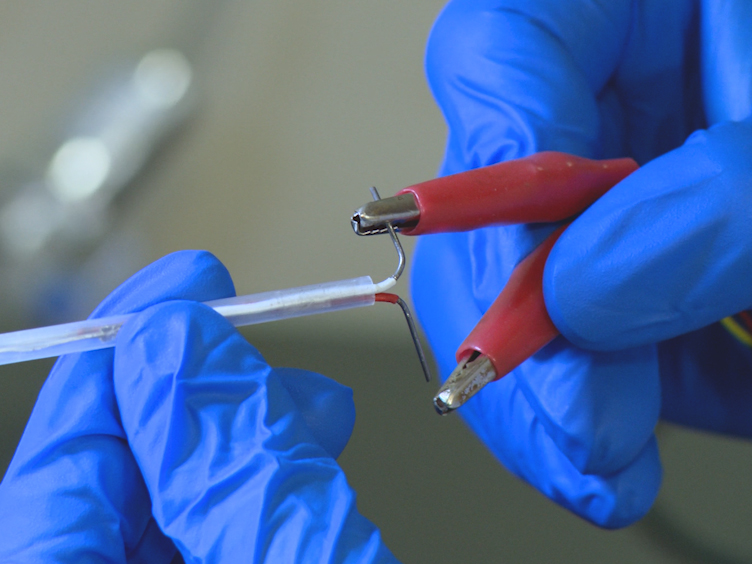