The acquisition of the angiogenic phenotype is an essential component of the escape from tumor dormancy. Although several classic in vitro assays (e.g., proliferation, migration, and others) and in vivo models have been developed to investigate and characterize angiogenic and non-angiogenic cell phenotypes, these methods are time and labor intensive, and often require expensive reagents and instruments, as well as significant expertise. In a recent study, we used a novel quantitative phase imaging (QPI) technique to conduct time-lapse and labeling-free characterizations of angiogenic and non-angiogenic human osteosarcoma KHOS cells. A panel of cellular parameters, including cell morphology, proliferation, and motility, were quantitatively measured and analyzed using QPI. This novel and quantitative approach provides the opportunity to continuously and non-invasively study relevant cellular processes, behaviors, and characteristics of cancer cells and other cell types in a simple and integrated manner. This report describes our experimental protocol, including cell preparation, QPI acquisition, and data analysis.

One of the earliest checkpoints in the development and progression of a solid tumor is the acquisition of the angiogenic phenotype, a hallmark of cancer. This progression involves a variety of biochemical and molecular processes1,2,3. A technical challenge in the study of this key step in tumor progression is the lack of tools to continuously and quantitatively characterize and differentiate between angiogenic and non-angiogenic phenotypes of live cancer cells in an unbiased manner. The traditional assays being used to investigate the cellular behaviors of angiogenic and non-angiogenic cells usually require expensive reagents and instruments, for example, cell proliferation/migration assays4,5,6,7,8,9,10,11,12,13,14 or complementary in vivo evaluations4,5,6,8,15,16, as well as requiring significant expertise and intensive time and labor consumption.

Recently, quantitative phase imaging (QPI) has emerged as a novel technique that enables time-lapse and labeling-free assessment of a variety of cell morphology and behavior parameters17,18,19,20,21,22. Unlike conventional optical microscopy, QPI quantifies variations of phase shift pixel by pixel after light passes through an optical object, and reconstructs a holograph with converted optical thickness and volume, thus enabling the direct analysis of live cells and the following features: (1) quantitative imaging, (2) non-invasive and time-lapse imaging, (3) label-free imaging, and (4) simultaneous multi-parameter imaging. These features make QPI a powerful tool to assess and understand pathological processes at cellular level.

In a recent study, we utilized QPI to quantitatively characterize and differentiate between angiogenic KHOS-A and non-angiogenic KHOS-N phenotypes of human osteosarcoma cells in a systematic and quantitative manner, combining analyses of cell morphology, proliferation, and motility23. Using image analysis software, a panel of cell morphological and behavior parameters were quantitatively compared between angiogenic and non-angiogenic human osteosarcoma cells and five characteristic differences were identified between these two phenotypes. This novel approach provides an integrated and quantitative platform for assessing a variety of biologically relevant cellular characteristics.

All the methods described here have been approved by the Boston Children's Hospital Institutional Biosafety Committee.

Figure 1 depicts a typical cell morphology characterization. Images are presented as holographs (Figure 1A-B) and 2D images (Figure 1C-D). Optical cell thicknesses (calculated from the refractive index and optical path length) are quantified via line profile or a whole cell measurement. Scatter plots of the area and thickness of KHOS-A and KHOS-N cells measured for a whole cell were plotted, as in Figure 1E-G, where these two phenotypes displayed different distribution patterns. The average numbers from the histogram (Figure 1H-M) or the exported files demonstrated that KHOS-A cells have smaller cell areas and greater thicknesses than KHOS-N cells. 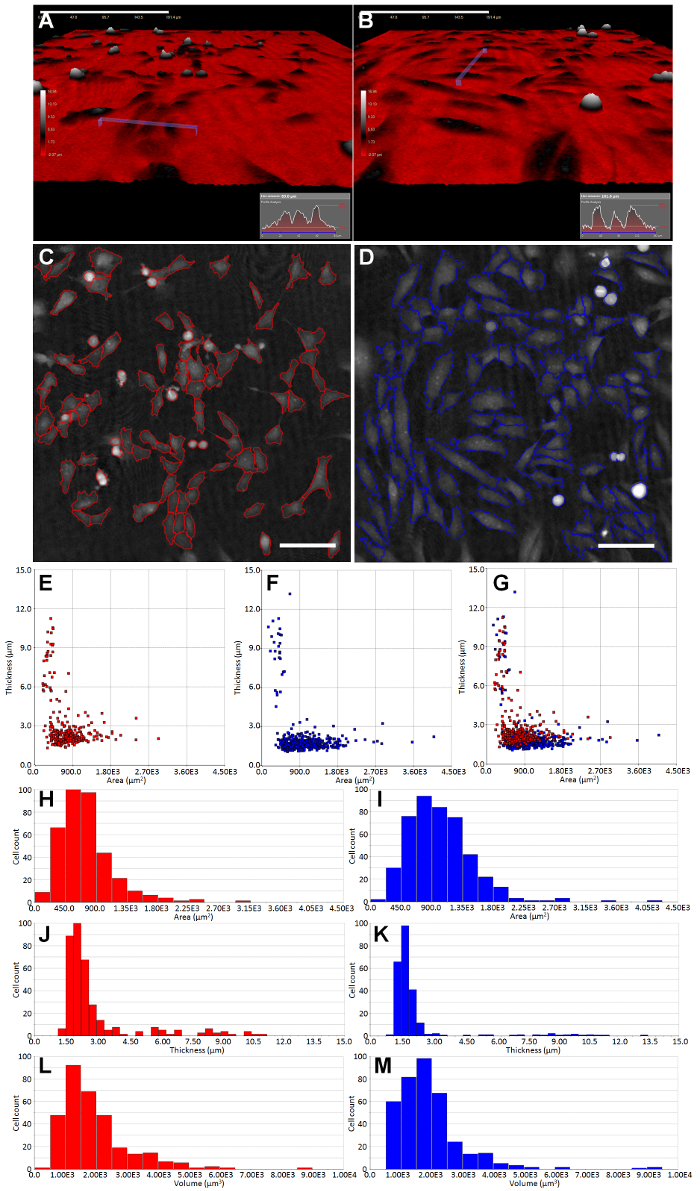 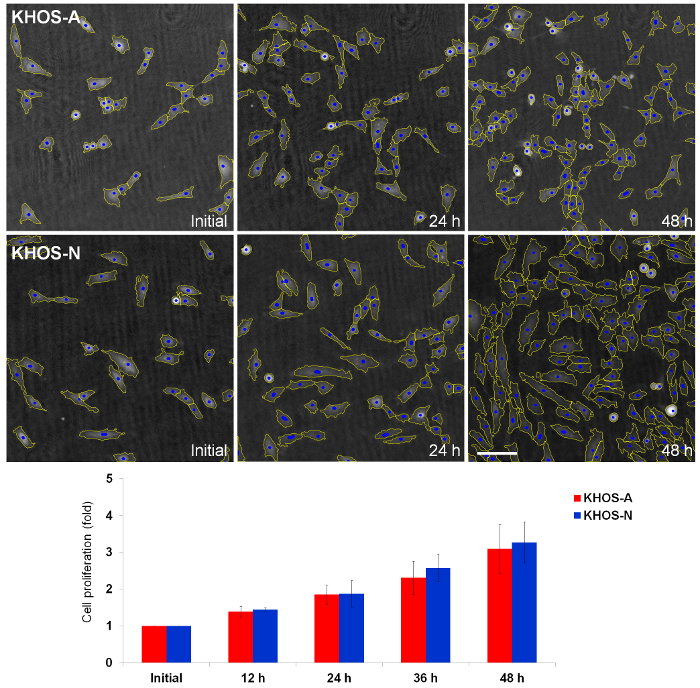 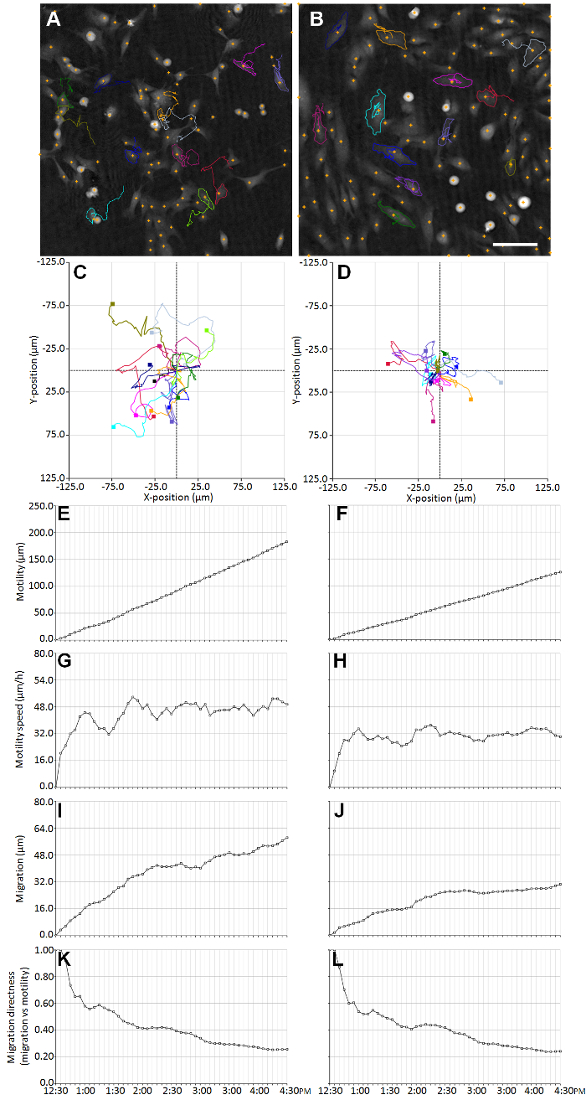 Compared with the conventional assays that assess cell morphology and cell behaviors, this method not only saves time and labor, but also provides more accurate and detailed information. For example, the location of the QPI system (inside of the cell incubator) reduces the disturbances from environmental changes such as photographing in an ambient environment (room temperature and atmosphere)23. In addition, optical cell thickness and volume, converted from phase shift, could be obtained with QPI, whereas only cell area is measured by the traditional cell imaging process. This feature of QPI generates more detailed information for quantitative comparisons of different cell phenotypes.

Proper seeding density of the cells of interest is critical in the current method. During the imaging acquisition phase, cells are expected to be less than a confluent monolayer due to the limitation of this coherent QPI technique that imaging acquisition could only be performed with one focus panel, which may lose partial information in the z direction (i.e., overlaid cells). In addition, characterizations using QPI are limited to the 2D format, which is not optimal for cell invasion in the z direction in the extracellular matrix. Multiple preset focal lengths are needed for future QPI methodology development.

In addition to cell counting, QPI imaging also provides informative images for studying cell mitosis without additional labeling21,23,24. While cell division was recognized easily by the obvious decrease in cell area and volume, the ability to objectively and quantitatively define and differentiate cell cycle stages for single cells has yet to be established. This capability would significantly facilitate research with respect to cell analysis for stem cell differentiation, drug response, and cell cycle arrest.

Due to the advantages of being quantitative, label-free, and easy to use, this method may also have useful clinical applications25,26,27,28,29,30. For example, this system could be utilized in the characterization of heterogeneous cell populations, including dormant and active cells in human tumors. The characterized cell morphological and behavioral differences between dormant and active cancer cells can be potentially used to decipher the molecular mechanisms underlying tumor dormancy in human cancers. 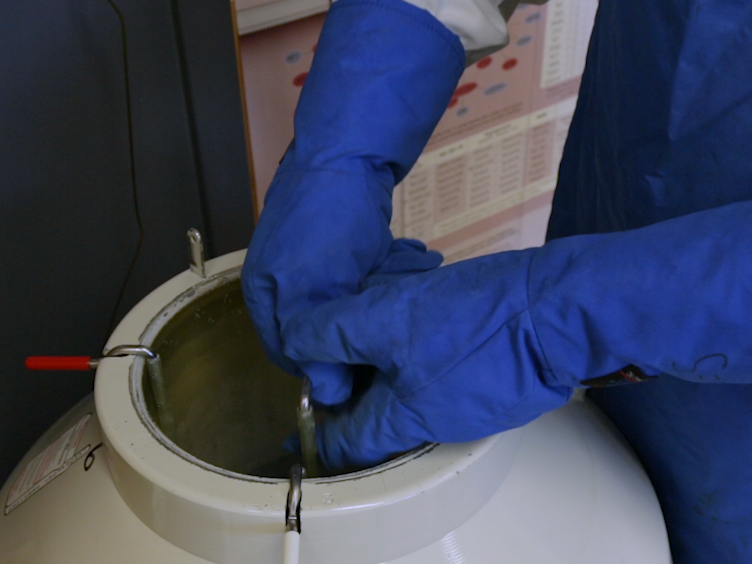