The prognosis of patients with metastatic cancers has improved in the past decades due to effective chemotherapy and oligometastatic surgery. For inoperable patients, local ablation therapies, such as stereotactic body radiotherapy (SBRT), can provide effective local tumor control with minimal toxicity. Because of its high precision and accuracy, SBRT delivers a higher radiation dose per fraction, is more effective, and targets smaller irradiation volumes than does conventional radiotherapy. In addition, steep dose gradients from target lesions to surrounding normal tissues are achieved using SBRT; thus, SBRT provides more effective tumor control and exhibits fewer side effects than conventional radiotherapy. The use of SBRT is prevalent for treating intracranial lesions (known as stereotactic radiosurgery); however, it is now also used for treating spinal and adrenal metastases. Because of advancements in image-guided assistance and respiratory motion management, several studies have investigated the use of SBRT for treating lung or liver tumors, which move as a patient breathes. The results of these studies have suggested that SBRT favorably controls tumors in the case of moving lesions.

Four-dimensional computed tomography (4D-CT) with an abdominal compressor (AC) is clinically convenient for effective respiratory motion management. Because this method is noninvasive and allows free breathing, its use reduces complications. Furthermore, patients consider this method convenient. Moreover, it is considered more efficient than other methods of respiratory motion management by physicians and therapists. The use of 4D-CT with an AC for treating pulmonary lesions has also been widely investigated, and the technique is gaining acceptance for treating hepatic lesions. However, the protocols for using 4D-CT with an AC for treating hepatic lesions are different from those used for treating pulmonary lesions. In this article, we describe a new protocol for SBRT with 4D-CT and an AC for treating liver metastases.

Conventionally, metastasis is considered the terminal stage of cancer and is associated with poor prognosis and survival. However, Mountain et al. in 1984 reported that according to their 20-year experience, complete surgical removal of pulmonary metastasis results in a relatively higher survival rate if the primary tumor site is under systemic control at the time of surgery1. Hellman and Weichselbaum in 1995 first proposed oligometastases, an intermediate stage between localized lesions and systemic disease with polymetastases, which can be cured using additional local treatment2,3. Over the past decades, early detection of metastasis, novel surgical methods for treating oligometastases (metastasectomy), and effective chemotherapy have improved the prognosis in patients with metastasis. The liver is one of the most common metastatic organs for solid tumors, and surgical resection of hepatic oligometastases can improve survival. Local ablation methods, including radiofrequency ablation, radioembolization, and radiotherapy, for treating liver metastases have been recommended for some inoperable patients to achieve the necessary local tumor control3,4,5,6,7. In past years, several prospective and retrospective studies have reported effective local tumor control of hepatic metastases through stereotactic body radiotherapy (SBRT), also known as stereotactic ablative radiotherapy, with tolerable toxicity4,5,8,9.

Improvements have been made in patient positioning and immobilization methods; image acquisition, integration, and transfer to radiotherapy systems; respiratory motion management; high-dose output and fast radiation delivery; and steep dose gradients from target lesions to surrounding normal tissues. Because of these advances, SBRT achieves highly precise and accurate radiotherapy with minimal serious toxicity10,11. Respiratory motion management is fundamental to SBRT, particularly for hepatic and pulmonary lesions. A respiratory management technique that is noninvasive and clinically convenient would substantially increase the popularity of SBRT as a treatment option. This article details an SBRT protocol for liver metastases that uses four-dimensional computed tomography (4D-CT) with an abdominal compressor (AC) for image-guided assistance and liver motion management.

Taipei Medical University Joint Institutional Review Board approval was obtained for this study.

SBRT can be implemented by intense-modulated radiotherapy (IMRT) (with

6 radiation beams) or volumetric arc radiotherapy (VMAT) (with continuous dose delivery and gantry rotation) to cover all targets in a single treatment because a single surgery may not achieve removal of all the tumors. A representative SBRT treatment plan demonstrated successful radiotherapy planning for two hepatic metastatic tumors when surgery was infeasible. The two metastatic tumors were 3cm (from segment 4 to segment 8) and 4.3 cm (in segment 8) in length, and their volume were 13 cm3 and 22 cm3, respectively. The prescribed dose was 50 Gy in 5 fractions and the beams were directed to avoid the OAR (Figure 1A-C). The sophisticated treatment plan consisted of four partial beam arcs namely 180° to 50°, 260° to 50°, 335° to 35°, and 50° to 180° (Figure 1D). Dose-volume histograms show the coverage over both the tumors, with 100% of the volume of the PTVs covered by >95% of the prescribed dose; the radiation doses to the OARs were within the constraints (Figure 2). 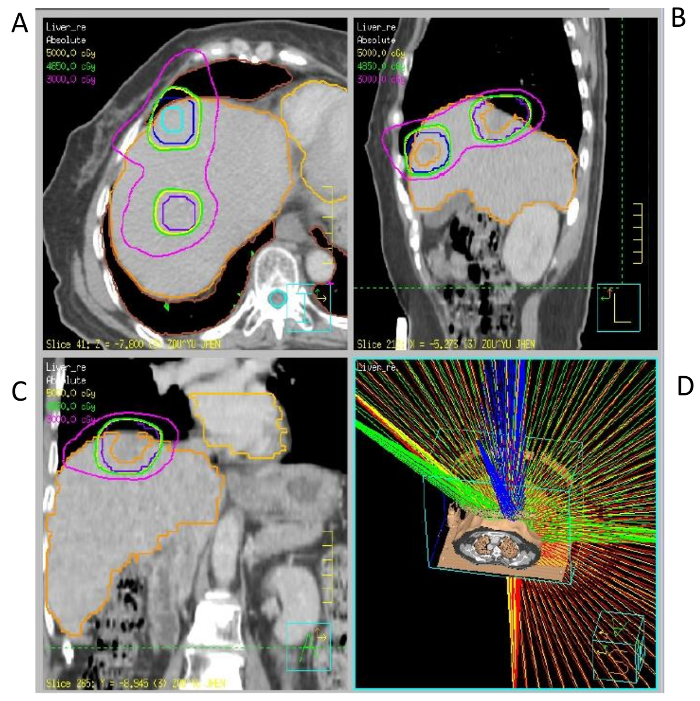 Figure 1: Dose distribution (A-C) and beam direction (D). The purple and light blue lines indicate the planning target volume, whereas the yellow and pink line indicate 50 and 30 Gy, respectively, in (A-C). Please click here to view a larger version of this figure. 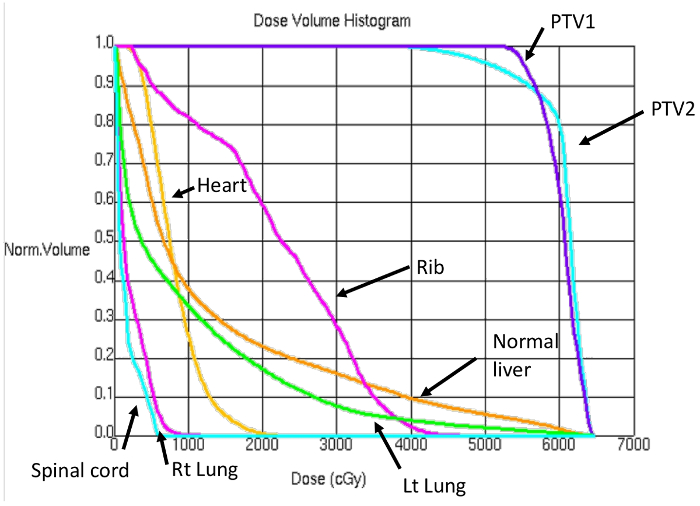 Respiration-induced liver deformity and organ motion contribute to the difficulties associated with radiation delivery, as well as contouring (target delineation) problems. Improvements in the techniques used for organ motion management have led to improvements in treatment accuracy and precision, which is fundamental to SBRT. Several image-guided techniques and respiratory motion management systems are currently available. Fiducial marker implantation is a common technique for target localization. A fiducial marker is usually a cylindrical gold seed, 2.5 to 5 mm in length with a diameter of 0.8 mm. Implanting a fiducial marker near a lesion enables X-ray-based image-guided systems to localize targets. However, complications associated with using fiducial markers, including internal bleeding, fever, pain, dislocation, and infection, have been reported in >30% of patients. Patients' acceptance of the invasive procedure is another concern12. Furthermore, the air breath coordination (ABC) and deep inspiration breath-hold (DIBH) technique are regularly used for image-guided radiotherapy; these noninvasive breath-control systems are designed to help patients hold their breath, thus immobilizing the target during radiation therapy. Despite patient training before treatment, however, prolonged treatment time for each fraction, difficulty in breathing, and individual medical conditions have limited the use of ABC and DIBH13,14.

First, although the image quality of a planning CT scan is still not as high as that of a diagnostic CT scan, we still suggest that contrasted CT enables accurate tumor contouring. Unlike SBRT for the lungs, pulmonary lesions can be easily distinguished from normal lung tissues on CT images of the lungs. However, in noncontrasted liver images, normal and malignant tissues cannot be easily distinguished. Second, daily 4D-CBCT for verification of tumor positions before treatment is essential for significantly increasing the intrafractional accuracy; 3 mm of the PTV margin was previously considered adequate with daily 4D-CBCT scans (although we still comply with the 5 mm of PTV margin criterion)18.Third, a slow CT scan or a cine CT scan should be performed under free breathing. The tumor from all phases of the 4D-CT dynamic tracking images can be contoured as the ITV for tumor motion, while the AC limits organ motion to reduce the irradiation volume. Moreover, radiation dose to the lung should be evaluated. Hepatic lesions close to the diaphragm can result in an increased radiation dose to the lungs. Radiation pneumonitis is a common complication; however, grade I radiation pneumonitis is usually asymptomatic. Dose constraints and CT scans of the entire lung should not be neglected.

Historically, conventional radiotherapy for hepatic carcinomas had minimal curative benefit. However, the liver has a relatively low tolerance for radiation doses, and radiation-induced liver disease (RILD) can be lethal. Although some studies have suggested pretreatment evaluation for preventing RILD during irradiation of hepatocellular carcinomas22, the treatment of hepatic lesions using conventional radiotherapy must be administered with caution. SBRT provides improved tumor control with minimal serious complications; however, only a few studies have reported risk evaluation for preventing RILD while using SBRT for treating liver metastases. Moreover, the eligibility criteria of patients for receiving SBRT for liver metastases are not clearly defined, although some common criteria have been reported in some studies4,5. Our selection criteria were as follows: 1) adult patients with a good performance status (Eastern Cooperative Oncology Group 0-1), 2) controlled cancer status through anticancer medication and with only oligometastases in the liver, 3) number of hepatic lesions ≤3 and largest tumor ≤6 cm in diameter, 4) liver volume (liver excluding gross tumor) greater than 700 cm3, and 5) without acute hepatitis or chronic hepatitis B under stable antiviral control. The histopathology of the original cancer did not have to be limited to the colorectum, breasts, and lungs, but these sites were preferred. A multidisciplinary tumor board discussion is required in the proposed protocol, and an operation should be the first option. Other local ablation therapies may be discussed by the tumor board, and final treatment is based upon the patient's decision.

Although local ablation including SBRT can achieve local tumor control and using 4D-CT with an AC can facilitate motion control, survival and progression-free intervals critically rely on the anticancer effects of chemotherapy, target therapy, or other systemic medications. In other words, without proper systemic control, even the most suitable local ablation therapy will not provide any overall benefit. Therefore, reviewing the effects of systemic therapy facilitates the selection of a local ablation therapy. Furthermore, the correlation between control of oligometastases and progression-free survival or overall survival still requires further investigation. Different factors, such as location and number of oligometastases, histopathology of the original cancer, or therapy-naivety of the patient, may have an effect on outcomes23. Despite the aforementioned limitations, SBRT, which is noninvasive and is as clinically convenient as 4D-CT with an AC for respiratory motion management, provides a considerable local ablation effect for liver metastases.

This research was supported by Taipei Medical University Hospital (106TMUH-NE-02). 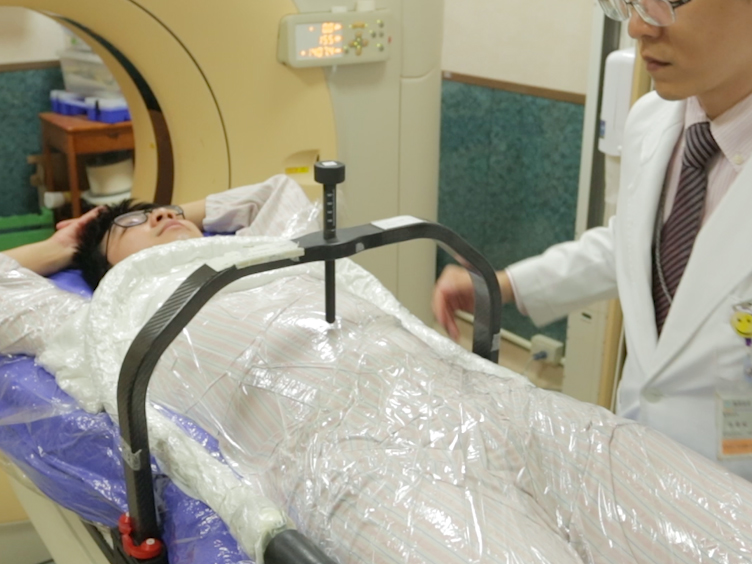