Here, we present a protocol introducing a set of new ex-ovo experiments and physical modeling approaches for studying the mechanics of morphogenesis during early chick embryonic brain torsion.

Embryonic development is traditionally studied from the perspective of biomolecular genetics, but the fundamental importance of mechanics in morphogenesis is becoming increasingly recognized. In particular, the embryonic chick heart and brain tube, which undergo drastic morphological changes as they develop, are among the prime candidates to study the role of physical forces in morphogenesis. Progressive ventral bending and rightward torsion of the tubular embryonic chick brain happen at the earliest stage of organ-level left-right asymmetry in chick embryonic development. The vitelline membrane (VM) constrains the dorsal side of the embryo and has been implicated in providing the force necessary to induce torsion of the developing brain. Here we present a combination of new ex-ovo experiments and physical modeling to identify the mechanics of brain torsion. At Hamburger-Hamilton stage 11, embryos are harvested and cultured ex ovo (in media). The VM is subsequently removed using a pulled capillary tube. By controlling the level of the fluid and subjecting the embryo to a fluid-air interface, the fluid surface tension of the media can be used to replace the mechanical role of the VM. Microsurgery experiments were also performed to alter the position of the heart to find the resultant change in the chirality of brain torsion. Results from this protocol illustrate the fundamental roles of mechanics in driving morphogenesis.

Modern developmental biology research largely focuses on understanding development from the perspective of molecular genetics1,2,3,4,5,6,7,8,9,10,11,12,13. It is known that physical phenomena play a central role in morphogenesis, or the generation of biological form14,15,16,17; however, specific mechanical mechanisms of development remain largely unstudied. Ventral flexure and rightward torsion of the primitive brain tube after Hamburger-Hamilton stage 11 (HH 11)18 are the two main processes that contribute to embryonic shape change19,20. In particular, the physical mechanism underlying the torsional development in the embryonic brain remains incompletely understood.

The embryonic torsion in chick embryo is among the earliest morphogenetic events of left-right (L-R) asymmetry in development. When the process of L-R asymmetry is perturbed, birth defects such as situs inversus, isomerism, or heterotaxia will occur21.
Here we present a protocol which combines ex-ovo experiments22,23 with physical modeling to characterize mechanical forces during early embryonic brain development. The goal of the method presented is to identify the mechanical forces responsible for brain torsion and the factors that affect the degree of torsion during early development12. Based on the experimental observation that the vitelline membrane (VM) constrains the dorsal side of the embryo, we hypothesized that the VM provides the force necessary to induce torsion of the developing brain. Therefore, in this method, we removed the part of the VM that covers the brain area to find out the effects on brain torsion. Furthermore, the method of applying fluid surface tension was used to confirm the mechanical role of the VM and provide an estimate of the force needed for brain torsion, which had not been done previously. Measuring the forces during embryonic morphogenesis is a challenging task. Notably, in a pioneering study, Campàs and co-workers24 developed a novel method to quantify the cellular stresses using injected microdroplets. Nevertheless, this method was limited to measure forces at the cellular level, hence not applicable to probe forces at tissue- or organism-level. The protocol presented in this paper was developed to partially fill this gap.

8. Altering the Direction of the Heart Loop

In this study, the VM of the embryo at HH11 was removed from the anterior end to the thoracic flexure. The embryos were imaged by an OCT system. At this stage, the torsion of brain tube has not started (Figure 1A). After being incubated to HH15-16, embryos with their VM removed exhibited reduced brain tube torsion, approximately 35 degrees (Figure 1B) compared to control embryos, which exhibit torsion of around 90 degrees. When the media level was lowered to induce surface tension on the dorsal end of embryos with their VMs removed, the brains twisted to levels comparable to those in control embryos (Figure 1C). Figure 2 shows a representative OCT image of an HH 13 embryo with its thoracic orientation angle and cranial orientation angle marked (Figure 2A). The angles are measured from a vertical position of the cross-section of the NT (Figure 2B, C). Results from our experiments suggested that normal brain tube torsion is driven by external loading on the dorsal end of the embryo and that this essential load is supplied by the VM20,25. Moreover, in a normal embryo the brain turns rightward as the heart loop goes to the right-hand side whereas in an embryo with the heart loop pushed to the left-hand side at an early stage (i.e., before HH stage 12), the brain also turns leftward following another 20 h of incubation (Figure 3c in Ref. [12]), suggesting that the position of the heart resulted in the asymmetry in brain torsion.

Data gathered in experiments enabled us to reconstruct a simplified geometry of the chick embryo without the VM from HH14-17 (Figure 3A). In this computational model, the brain and right looped heart were modeled as curved rods. A block representing the splanchnopleure (SPL) membrane was contact with the heart rod. By designing a negative mold from this computational model, 3D printing this mold, and casting the mold with a silicone elastomer, we fabricated a physical model from the simplified computational geometry (Figure 3B-D). A coverslip pressed downward on the dorsal end of the physical model replicated the mechanical load provided by the VM or surface tension from our experiments (Figure 3D). The model exhibits comparable geometry and brain torsion with an actual embryo, cultured ex-ovo to HH14-17 (Figure 3E). 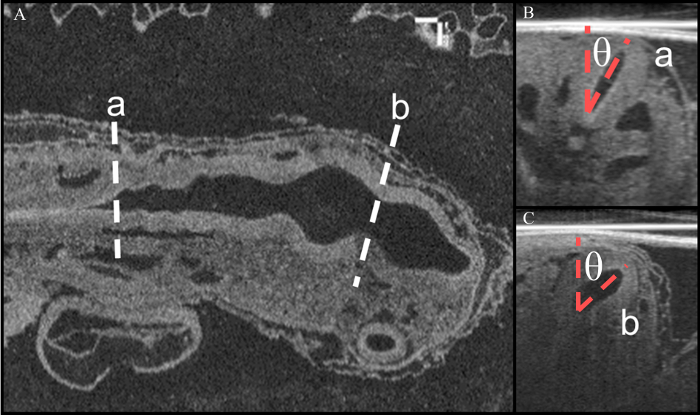 Figure 2: OCT image of an HH13 embryo. (A) The figure has its thoracic orientation angle marked at (a) and its cranial orientation angle measured at (b). (B), (C) A cross-section of the NT at positions (a) and (b). Angles are measured from a vertical position. Please click here to view a larger version of this figure. 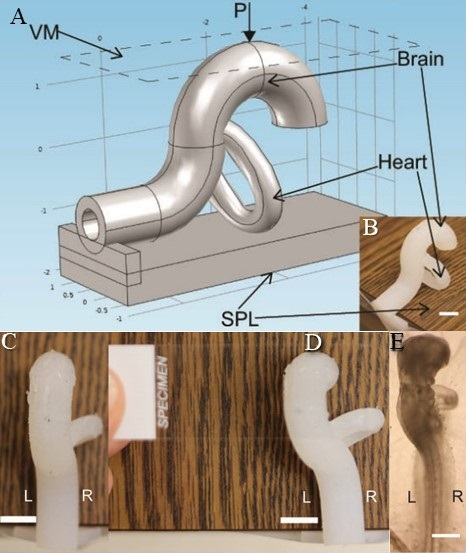 Figure 3: A physical model of the embryo demonstrating brain torsion. (A) A simplified geometry of a chick embryo without VM at HH14-17 (B) Silicone elastomer physical model of a chick embryo. (C) Dorsal view of model with the heart on the right side. (D) Dorsal view of the model under an external force applied by a coverslip, starting to show rightward brain torsion. (E) Chick embryo cultured ex-ovo beginning to twist rightwards at HH14 for comparison. Scale Bars, (B-D) 1 cm, (E) 1 mm. Adapted from Ref. [12] with permission. Please click here to view a larger version of this figure.

While physical phenomena play an integral role in morphogenesis26,27,28,29,30, the specific mechanical mechanisms, along with the coordination of mechanical and molecular mechanisms, remain largely unexplored. It is known that the ventral flexure and rightward torsion of the primitive brain are two central processes that contribute to early embryonic morphogenesis18,31,32,33,34, but no prior studies addressed the mechanical origins of brain torsion, one of the earliest organ-level left-right asymmetry event.

The key steps of the protocol include the removal of the VM to identify the mechanical driving force for brain torsion and the application of fluid surface tension to further confirm the findings. The troubleshooting of this technique took place to identify the initial stage at which the VM should be removed to induce significant changes in torsion.

The downward passive force of the VM was shown to be a fundamental mechanical boundary for the growing embryonic brain tube. When the VM of the embryo was removed, the brain no longer twists to a normal degree but could be made to twist to the control level through the subsequent application of surface tension by lowering the fluid level. The known surface tension of water at ambient temperature is 72.01 ± 0.1 mN/m, and the contact length is of the order of millimeters, the force can then be calculated. Thereby we estimated the VM exerted a force of approximately 10 mN on the HH 14-17 embryo12.

Using this protocol, we were able to determine that VM plays the key mechanical role in embryonic brain torsion. The results obtained using this new protocol suggests that the VM is a critical structure for the progression of normal brain torsion during embryonic morphogenesis, as it supplies the geometric constraints and mechanical load necessary for the twisting of the brain35. The results also indicated that the position of the heart determines the direction of brain torsion. L-R asymmetry of the embryo during development leads to a right-looped shape of the heart, which in turn drives rightward twisting of the brain36,37,38,39. It is worth mentioning that the mechanical method of displacing the heart's position differs from the chemical method developed by other researchers13 and is better for delineating the role of mechanics in morphogenesis. Altogether, our results illustrate the fundamental role of mechanics in driving torsional brain morphogenesis in the chick embryo.

In the future, the protocol may be applied to identify how genetic and mechanical factors together regular embryonic torsion and unveil how these different factors work in concert to ensure appropriate morphogenesis.

Z.C. acknowledges the support from Dartmouth startup fund and the Branco Weiss- Society for Science fellowship, administered by ETH Zurich. The authors thank Drs. Larry A. Taber, Benjamen A. Filas, Qiaohang Guo, and Yunfei Shi for helpful discussions, as well as the anonymous reviewers for comments. This material is based upon work supported by the National Science Foundation Graduate Research Fellowship under Grant No. DGE-1313911. Any opinion, findings, and conclusions or recommendations expressed in this material are those of the authors(s) and do not necessarily reflect the views of the National Science Foundation. 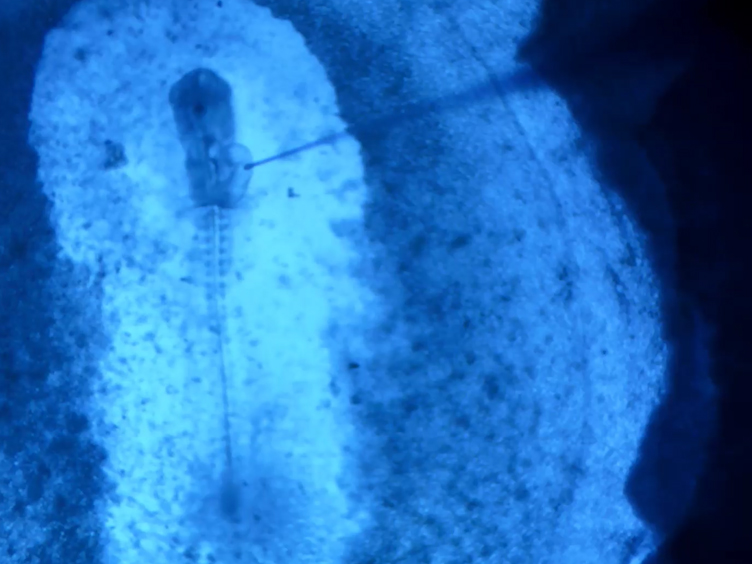