Knee osteoarthritis is frequently seen in the orthopedic department. We introduce in detail the entire knee osteoarthritis treatment process with platelet-rich plasma injection, including preparation, procedures, and evaluation.

Knee osteoarthritis (KOA) is one of the most frequently encountered diseases in the orthopedic department. Existing non-surgical treatments have a limited effect on the repair of cartilage and on bone regeneration. Platelet-rich plasma (PRP) is an autologous bioactive substance that can repair cartilage injury and accelerate bone regeneration effectively. However, reporting of PRP preparation protocols in clinical studies is highly inconsistent, with the majority of studies providing insufficient information to allow the protocol to be reproduced. We describe a repeatable method of preparing PRP visually, the treatment of KOA using PRP intra-articular injection, and methods of evaluating the outcome. PRP was prepared using manual double centrifugation. The PRP layer was extracted from peripheral blood and used for knee joint cavity injection. Evaluations included assessments of blood platelet concentrations and clinical outcomes. Preparation of PRP by manual centrifugation requires less apparatus and is less costly than plasma filtration or centrifugation using equipment. The centrifugation time of our double centrifugation method was 6 and 5 minutes for the respective centrifugations at forces of 800 and 1400 x g, respectively, to allow for the consistent preparation of standardized PRP. However, a manual method is susceptible to operator error, and PRP batch preparation is not available. Intra-articular injection of PRP proved to be an effective treatment for knee osteoarthritis. The entire treatment procedure took less than 30 minutes, the blood platelet concentration of PRP could be standardized, and treatment was proven to be effective when evaluated by follow-up.

Knee osteoarthritis (KOA) is one of the most frequently seen diseases in the orthopedic department; 30%-50% of people over the age of 65 years experience this disease1. At present, the conservative management of KOA mainly includes oral administration of non-steroidal anti-inflammatory drugs and cartilage nutrient drugs, intra-articular injection of sodium hyaluronate, and physiotherapy. However, these methods cannot stop the process of knee joint degeneration2. Articular cartilage defects can cause articular surface wear, joint instability, and metabolic changes, which are part of the pathogenesis of KOA3. However, because of the absence of blood vessels, nerves and lymphoid tissue in articular cartilage, recovery after damage is difficult. An effective method of repairing cartilage is especially important for the treatment of KOA. The treatment of osteoclasia is also a key focus in KOA treatment.

Platelet-rich plasma (PRP) is an autologous bioactive substance, and the application of PRP to bone and joint problems is being increasingly studied. The biological rationale for the clinical use of PRP includes its effect on the local delivery of growth factors and modification of the inflammatory response and its positive effects on cell proliferation and differentiation4. After activation following intra-articular injection, PRP releases α-granule through degranulation and secretes various growth factors, including the platelet-derived growth factor, the transforming growth factor-β, the insulin-like growth factor, the epidermal growth factor, the vascular endothelial growth factor, and the fibroblast growth factor. These promote osteoblast and chondrocyte proliferation, inhibit cartilage degeneration, strengthen the stability of cartilage and subchondral bone, regulate the gene expression tissue inhibitor of metalloproteinase and maintain the balance of synthesis and degradation of proteoglycans5,6. Therefore, PRP can repair cartilage injury and accelerate bone regeneration.

The outcome of PRP injection is influenced by various factors, including the sampling site7, the type of centrifuge preparation method8, and the use of anticoagulants9 and activators10. There are roughly 3 types centrifugal methods to prepare PRP. Manual centrifugation, equipment-based centrifugation, or plasma filtration techniques are available, although manual and equipment-based methods are the most commonly used. The manual method requires the least equipment, is convenient, is low cost, and is simple to perform (Figure 1). PRP is prepared by performance of manual centrifugation twice. Mixed peripheral blood and anticoagulant are centrifuged to separate hemocytes from plasma and blood platelets. After discarding the red blood cells on the bottom layer, the supernatant liquid is centrifuged for re-separation, dividing it into supernatant platelet-poor plasma, middle PRP, and subnatant residual red blood cells. The middle layer is used for knee joint cavity injection (if the quantity is insufficient, part of the supernatant can be drawn). Evaluations of the method include assessments of blood platelet concentration and clinical outcomes.

The reporting of PRP preparation protocols in clinical studies is highly inconsistent, and the majority of studies do not provide sufficient information to allow the protocol to be reproduced11. Here, we describe a reproducible method of preparing PRP and treatment of KOA with PRP intra-articular injection, with evaluation of the outcome. Inclusion criteria were patients with knee osteoarthritis who have poor pain relief for simple analgesic medication (such as acetaminophen) and conservative treatment. Exclusion criteria included patients with venous return or lymphatic drainage disorder; patients with knee joint infections; patients with a dermatosis or infection in the injection area; patients with fever; patients with coagulant function abnormality; patients with serious cardiovascular disease. The whole treatment procedure takes less than 30 minutes, and the blood platelet concentration of PRP is proven to reach a standardized measurement. Its effectiveness is demonstrated by evaluating the outcomes during close follow-up.

The methods described were approved by the Ethics Committee of Guangdong General Hospital.

As a result, the platelet count of the PRP reached a standard concentration level of 1121 x 103/µL. We conducted the 15 follow-up surveys described in the protocol on a 55-year-old male patient with early KOA. It was obvious that early clinical outcome was satisfactory after the intra-articular administration of PRP (Figure 2). However, medium-term efficacy was slightly inferior. A markedly significant analgesic effect was observed (Figure 2A). KSS knee score was higher than KSS function score (Figure 2C, Figure 2D), which meant the effect of PRP on subjective symptoms was better than on objective symptoms. The Lysholm knee functional scale scores indicated that our method had an evidential effect in improving cartilage injury and soft-tissue injury symptoms (Figure 2E). Overall, the therapeutic effects of our PRP protocol were notable.

Figure 1: Flow chart of the protocol design. Please click here to view a larger version of this figure. 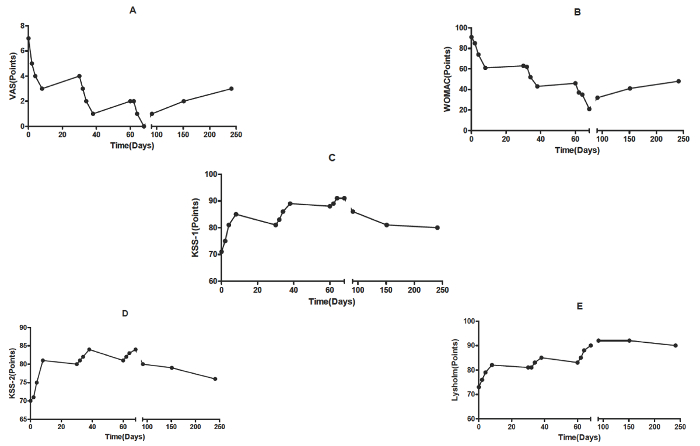 Some PRP is harvested and directly injected into the area of injury, but other formulations add a platelet-activating agent such as thrombin or CaCl2. In general, PRP used to relieve chronic inflammation or "wear and tear" injuries such as OA is usually injected without an activating agent17.

For the evaluation of treatment outcomes, we used a number of scales. The VAS provided detailed pain measurement. We used the WOMAC to evaluate the severity of gonitis and the treatment effect according to relevant symptoms and signs. The KSS provided a knee score for pain, mobility, and stability and a function score for walking ability and stair activity. The Lysholm knee functional scale evaluated ligament and cartilage injury.

There were several limitations to our method. First, manual preparation is susceptible to operator error, mainly from subjectivity in the drawing of the middle buffering layer and part of the supernatant liquid after the second centrifugation. However, after repeated experiments with different operators, we finally found the effective platelet concentration. Second, PRP batch preparation is not available using this method. PRP can only be prepared by drawing blood before each injection. As storage of samples is difficult, it must be acceptable to re-prepare PRP every time.

In summary, intra-articular injection of PRP is an effective treatment for knee osteoarthritis. This study report provides the whole treatment procedure in detail, including the preparation of PRP of reliable quality, the introduction of a standard injection procedure, and a scientific and practical evaluation plan.

This study was supported by the National Natural Science Foundation of China (81371991) and the Major Program of Science and Technology of Guangdong (2015B020225007). 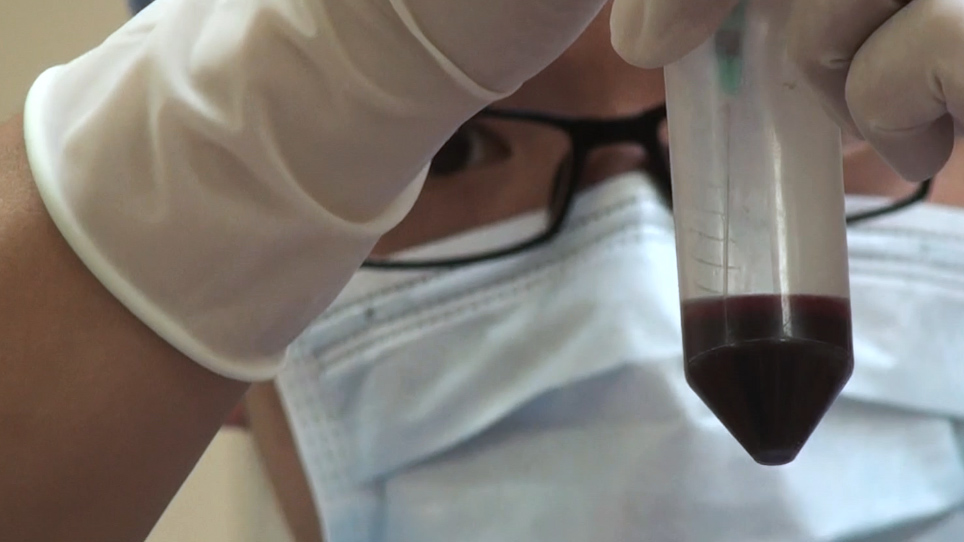