Here, we present a protocol to get a large field of view (FOV) three-dimensional (3D) fluorescence and OCT retinal image by using a novel imaging multimodal platform. We will introduce the system setup, the method of alignment, and the operational protocols. In vivo imaging will be demonstrated, and representative results will be provided.

Ophthalmology and vision science greatly benefit from the modern optical imaging techniques, since the retina can be easily accessed with light. Fluorescence retinal imaging is an essential tool in the diagnosis and management of chorioretinal vascular diseases such as diabetic retinopathy (DR) and age-related macular degeneration (AMD), both of which are leading causes of blindness in the United States.

However, it is still challenging to acquire a large field of view (FOV), three-dimensional (3D) retinal imaging by using fluorescence imaging. Fundus photography does not have the depth-resolving capability and does not reject diffuse light. As a result, the mixing of signals from different depth reduces the image quality. Scanning laser ophthalmoscopy (SLO) and confocal SLO (cSLO) can reduce the effect of diffused light by using confocal gating1. However, it is difficult for SLO or cSLO to acquire a 3D human retinal image due to the limit of their depth of focus. Adaptive optics SLO (AOSLO) can provide superb resolution and contrast by correcting for the wavefront aberrations introduced by the human eye. However, AOSLO would still need z-stacking for volumetric imaging2. Optical coherence tomography (OCT)3 and OCT angiography (OCTA) systems overcome these restrictions to provide three-dimensional (3D) anatomical and vascular images4,5,6, but the dye-free nature of OCT cannot visualize leakage indicative of vascular dysfunction.

This protocol describes a novel multimodal platform for 3D volumetric fluorescence retinal imaging, namely oblique scanning laser ophthalmoscopy (oSLO). In this imaging system, an oblique scanning is generated by a dove tail slider, and a final imaging system is aligned in an angle to detect fluorescence cross sectional images. The system uses laser scanning methods, and these techniques allow easy incorporation with OCT as a complementary volumetric structural imaging modality. The current depth resolution is about 25 µm in the rat retina and the field of view is 30°. Essentially, the oSLO allows a fluorescent version of OCT and can be simultaneously combined with OCT and OCTA over a large FOV.

In this protocol, we will describe the setup of the oSLO, the method of alignment and construction, the method of in vivo imaging of rat retina, and the representative results.

All methods described here have been approved by the Animal Care and Use Committee (ACUC) of Boston Medical Center.

Figure 4a shows a cross-sectional OCT image of a rat retina. Figure 4b-4c show the same retinal cross-sectional images of OCTA and oSLO vFA acquired at the same time. The oSLO enables cross-sectional FA analogous to the OCT B-scan. In comparison to OCTA, the oSLO vFA cross-sectional image clearly identifies the vessels in nerve fiber layer (NFL) and ganglion cell layer (GCL), and capillaries in outer plexiform layer (OPL). Figure 4d and 4g show the superficial layer of OCTA and oSLO vFA image. Unlike OCTA, the oSLO vFA image (Figure 4g) avoids the motion artifacts (vertical stripes in Figure 4d) by utilizing fluorescence emission contrast. By comparing the oSLO vFA (Figure 4e) and OCTA (Figure 4h) images within the retinal intermediate layer, the vertically diving vessels are clearly shown in the oSLO FA image but not apparent in OCTA. This is presumably because the blood flow speed or the vessel orientation will affect the OCTA signal but not the oSLO fluorescence contrast.

Figure 4f and 4i show the images within the deep capillary plexus layer. The regions pointed out by blue arrows in oSLO vFA have a better contrast than OCTA in the vasculature. The size of the venule pointed out by white arrows in oSLO is larger than that in OCTA. Overall, the oSLO vFA image resembles the actual vascular morphology more accurately than OCTA, since it is not dependent upon blood flow speed or the vessel orientation. An en face fly-through from two simultaneously acquired volumetric data set from oSLO and OCTA are shown in Video 1. 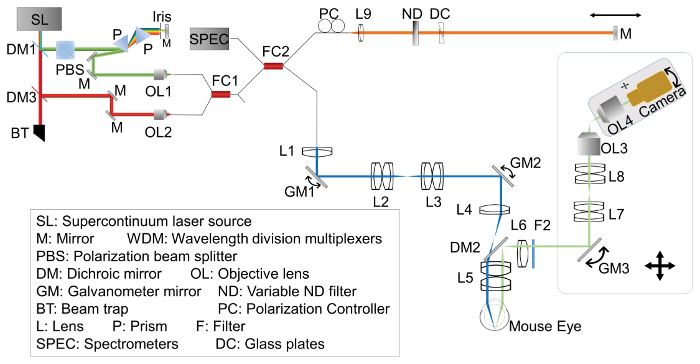 Figure 1. The system schematic. Please click here to view a larger version of this figure. 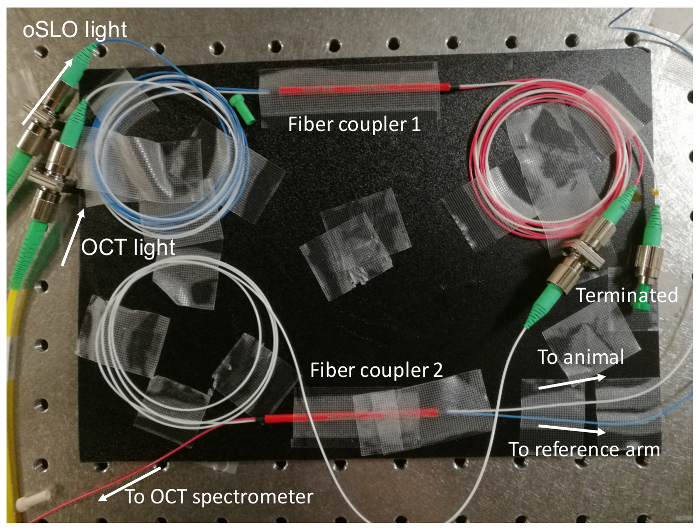 Figure 2. The photograph of the two cascaded fiber couplers that direct oSLO and OCT light. The routes of the light pass are labeled. Please click here to view a larger version of this figure. 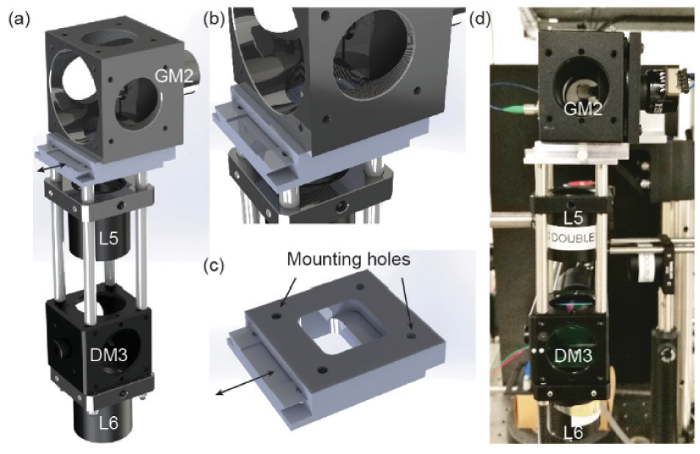 Figure 4. Rat retinal image acquired by oSLO and OCTA at the same time. The example of (a) the cross-sectional image of OCT (b) OCTA and (c) oSLO FA. Panels (d) and (g) show en face OCT and oSLO FA images from the superficial layer. The motion artifacts in OCTA image was pointed out by red arrows. Panel (e) and (h) show the results from the intermediate layer. The locations where the vessels dive down into next layer were pointed out by yellow arrows, which are clearer on oSLO FA than OCTA. Panels (f) and (i) show the results from the deep capillary plexuses layer. The contrast of oSLO is better than OCTA in the region pointed out by blue arrows. The size of the venule pointed out by white arrows in oSLO is larger than that in OCTA. Bars in the figure is 200 µm. Please click here to view a larger version of this figure.

Here, we have described oSLO, an in vivo volumetric fluorescent retinal imaging technique with a FOV over 30°. Compared to OCT, a current standard of care imaging method in ophthalmology, oSLO offers a similar 3D imaging capability yet allows fluorescence contrast that OCT is not sensitive to. The advantage of oSLO is that it requires only one raster scan, and thus allows the seamless combination of OCT, providing two complementary techniques for structural and fluorescent volumetric imaging.

In this protocol, the key point to obtain good image quality is the clarity of the rat eye. If the oSLO image is obscured, examine whether there is cataract formation. Several factors such as ketamine/xylazine anesthesia, cornea drying, and over-exposure to blue light will cause formation of cataracts, which would significantly deteriorate the image quality. To prevent the cataracts, avoid continuous exposure to blue light for more than 2 minutes; apply artificial eye tear at least once every minute to prevent cornea drying; and allow the eye to rest at least 30 seconds between imaging sections by blocking the light.

We envision that oSLO can significantly impact the clinical practice of fluorescence imaging. We have shown that the depth resolving power can effectively eliminate the signal from the outer retinal, yielding high-contrast volumetric FA images down to the single capillary level, which is unobtainable with conventional SLO. The dramatically improved image clarity would allow for more sensitive detection and quantification of blood-retina barrier disruption and retinal capillary leakage, the hallmark of vision-threatening macular edema in DR and other chorioretinal vascular diseases.

In the current system, the speed of the CCD camera is 20 frames per second, which leads to >25 second acquisition times. A scientific CMOS camera will dramatically improve the system speed. The fluorescence detection has a different optical path separated from the illumination. It will simplify the system if using the same optical path for the illumination and detection in the future design. In summary, a novel multimodal platform for volumetric retinal imaging, namely oblique scanning laser ophthalmoscopy (oSLO), was presented. The large FOV in vivo imaging over a 30° viewing angle of rat retina using oSLO and simultaneous optical coherence tomography (OCT) was demonstrated.

Ji Yi holds a pending patent for oSLO. The other author(s) declare no competing financial interests.

Funding is from the Evans Medical foundation funding from Boston Medical Center as well as a sub-contract from NIH 5R01CA183101, BU-CTSI pilot grant 1UL1TR001430, BU-Joslin pilot program, and BU-CTSI KL2TR001411. 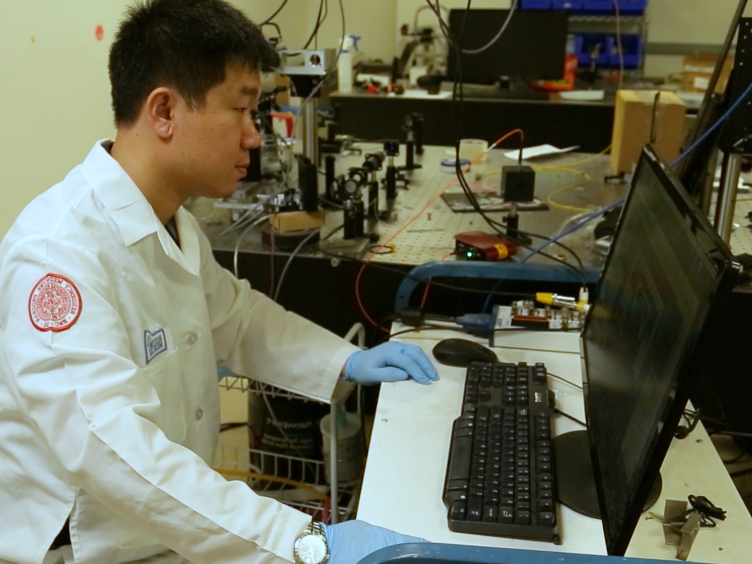