Herein, we describe a method for the isolation, expansion, and differentiation of mesenchymal stem cells from canine ovarian tissue.

Interest in mesenchymal stem cells (MSCs) has increased over the past decade due to their ease of isolation, expansion, and culture. Recently, studies have demonstrated the wide differentiation capacity that these cells possess. The ovary represents a promising candidate for cell-based therapies due to the fact that it is rich in MSCs and that it is frequently discarded after ovariectomy surgeries as biological waste. This article describes procedures for the isolation, expansion, and differentiation of MSCs derived from the canine ovary, without the necessity of cell-sorting techniques. This protocol represents an important tool for regenerative medicine because of the broad applicability of these highly differentiable cells in clinical trials and therapeutic uses.

The number of published studies that focus on stem cells has increased substantially over the past decade, a research effort that has been fueled by the collective goal of discovering powerful regenerative medicine therapies. Stem cells have two primary defining markers: self- renovation and differentiation. Mesenchymal stem cells are responsible for regular tissue turnover and have a more restricted capacity of differentiation when compared to embryonic stem cells1. Recently, many studies have shown a wide range of differentiation of MSCs, and a topic under discussion is whether differences between embryonic and adult stem cells exist at all2.

The ovarium surface epithelium is an uncommitted layer of cells, relatively less differentiated, which expresses both epithelial and mesenchymal markers3, retaining the capacity to differentiate into different types of cells in response to environmental signals4. The exact location of stem cells in the ovary is not well known; however, it has been proposed that bipotential progenitors in the tunica albuginea give rise to germ cells5. Immunological studies have hypothesized that these cells have a stromal origin6 or are located in or proximal to the ovary surface7. Since mesenchymal stem cells express numerous receptors that play an important role in cell adhesion8, an experiment was designed to test the hypothesis that selecting a population of cells with rapid adhesion would isolate a population of cells clearly characterizable as mesenchymal in nature. Recently, our group reported the derivation of MSCs from ovarian tissue based on their capacity of adhesion to the plastic surface of the culture dish in the first 3 h of culture, in order to obtain a purified population of cells exhibiting rapid adhesion9. Here, we describe the developed method for mesenchymal stem cell isolation from the ovarian tissue.

This experiment was performed with the ovaries of four mongrel female dogs donated after elective surgery at a canine sterilization program. This experiment was approved by the Ethics Committee on the use of animals of UNESP-FCAV (protocol no. 026991/13).

2. Isolation of Mesenchymal Stem Cells from the Ovary

3. Expansion of Mesenchymal Stem Cells from the Ovary

4. Differentiation of Mesenchymal Stem Cells from the Ovary

NOTE: Differentiation assays were performed according to the guidelines established in Hill et al.9.

The ovarian MSC isolation procedure is summarized in Figure 1. After surgery, tissue mincing, collagenase digestion, and a media change 3 h after the beginning of the culture, a putative MSC population with rapid plastic-adhesive properties was successfully isolated from canine ovarian tissue. The harvested cells rapidly adhered to the plastic surface of the culture dish and grew into a morphologically homogeneous monolayer culture with typical MSC-like morphology (Figure 3).

Characterization of Ovarian MSC In Vitro

The goal of MSC characterization is to ensure that isolated cells conform to standard MSC criteria. These include adherence to plastic, a positive detection of mesenchymal surface markers, and an absence of hematopoietic surface markers, as well as the capacity to undergo mesodermal differentiation.

As shown in Figure 3, ovarian-derived cells were adherent to the plastic and exhibited a fibroblast-like morphology, fulfilling the first criterion that defines MSCs. Moreover, the isolated cells showed the expression of transcripts for the canine MSC markers CD44, CD90, and CD105. In addition, MSC-specific cell surface antigens CD90 and CD44 were detected by early passage FACS analysis and immunocytochemistry. The absence of the markers CD45 and CD34, which are hematopoietic-specific cell surface antigens, was also confirmed by the same techniques (Figure 4). This further confirmed that the ovary contains cells expressing an MSC-specific phenotype9. The antibodies that were used in this experiment for canine MSC characterization are listed in the Table of Materials. 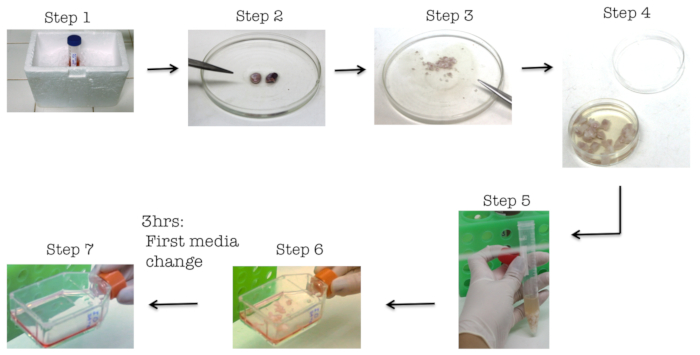 Figure 1: Main steps of the isolation procedure. (1) After surgery, transfer the ovaries to sterile tubes with PBS, on ice. (2) In order to wash the ovaries, they should be transferred to a 100 mm plate with PBS. (3) Mince the tissue into small pieces, approximately 1 mm in size. (4) In order to liberate the cells from the tissue, transfer the pieces of tissue to 35 mm plates and add collagenase for a 3 h digestion in the incubator. (5) Transfer the contents of the plate to a conical tube for centrifugation. (6) Plate the pellet in a T25 bottle and incubate for 3 h. (7) After the first 3 h of culture, change the culture media. Please click here to view a larger version of this figure. 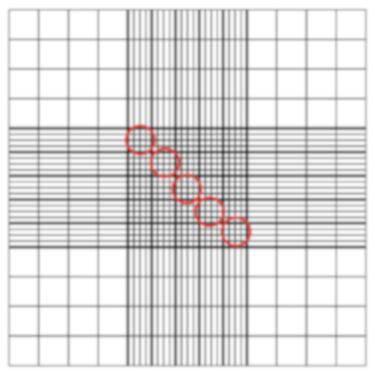 Figure 2: Hemocytometer. The five small squares to be counted are marked in red.

Figure 3: Cell morphology. When the media was changed 3 h after the beginning of the culture it resulted in a homogeneous population of mesenchymal cells, which exhibited a fibroblast-like morphology. On the contrary, when the first media change is done after 48 h other cell types besides the fibroblast-like cells can be observed. The scale bar = 1,000 µm. This figure has been modified from Hill et al.9. Please click here to view a larger version of this figure.

Figure 4: Molecular profile of ovarian MSC. (A) The isolated cells exhibited a classic MSC marker profile, being positive for three MSC markers by real-time PCR (CD90, CD105, and CD44). (B) By protein analysis, CD44 was positive in those cells, and they lacked the expression of two hematopoietic markers (CD34 and CD45). The scale bar = 70 µm. This figure has been modified from Hill et al.9. Please click here to view a larger version of this figure. 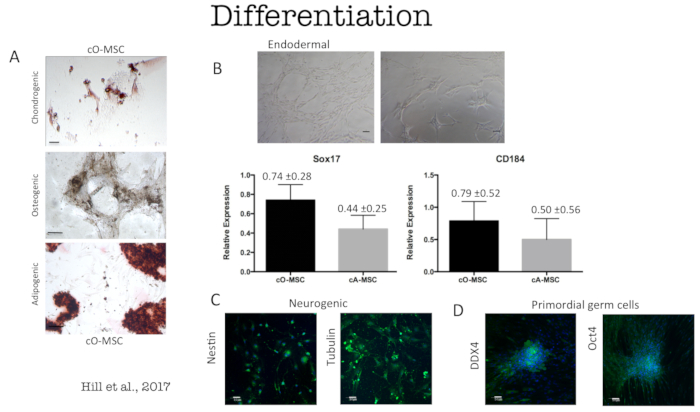 Herein we provide evidence that MSCs can be isolated from canine ovarian tissue, which is considered biological waste after ovariectomy. Due to the fact that many cell types can be found in the ovary, we proposed a protocol to select MSCs based on their rapid adherence to plastic, which successfully selected cells that grew in a monolayer with a fibroblast-like morphology.

The first report of the derivation of MSCs from bone marrow was based on the plastic adhesion capacity of the MSCs during the first 48 h of culture11; however, it has been reported that this method has the potential to isolate a heterogeneous population, phenotypically and functionally, at least for bone marrow12. The proposed culture method also selects cells by plastic adhesion capacity and isolates mesenchymal cells from a tissue that has many cell types, without the necessity of sorting the desirable cells. Due to the fact that mesenchymal stem cells express numerous receptors that play an important role in cell adhesion8, it was hypothesized that if a population of cells with rapid adhesion were selected, it would result in a more homogeneous population at the first passage, with a reliable MSC profile. The representative results provide evidence that a shorter duration plastic adhesion assay can be used to isolate a morphologically homogeneous population of MSCs at the first passage, without the necessity of waiting for more advanced passages or cell sorting.

A critical step in this protocol is to change the media 3 h after the beginning of the culture. As shown in the representative results section, the stem cells obtained from canine ovaries met the three criteria established for the characterization of MSCs: they exhibited a fibroblast-like morphology, were positive for the presence of MSC markers, and were able to differentiate into such mesenchymal lineages as osteogenic, adipogenic and chondrogenic lineages. Cells isolated in this experiment were also successfully differentiated into endodermal precursors, ectodermal lineages, and primordial germ cell lineages. The cells should reach confluence approximately 5 - 7 days after the initial plating. The cells from animals with an advanced age may grow more slowly than those of young animals, and of those, fewer cells may adhere to the plastic. In these cases, the concentration of FBS in the media can be increased to 15%.

Therefore, the selection for MSCs based on the cells with more rapid adherence capacity represents an inexpensive, streamlined, and effective procedure. From a therapeutic perspective, it is most important to highlight that these cells represent a promising tool for regenerative medicine, especially because of their wide range of differentiation.

The authors acknowledge the canine sterilization program at UNESP-FCAV for kindly providing the ovaries. This work was supported by grants from FAPESP (process no. 2013/14293-0) and CAPES. 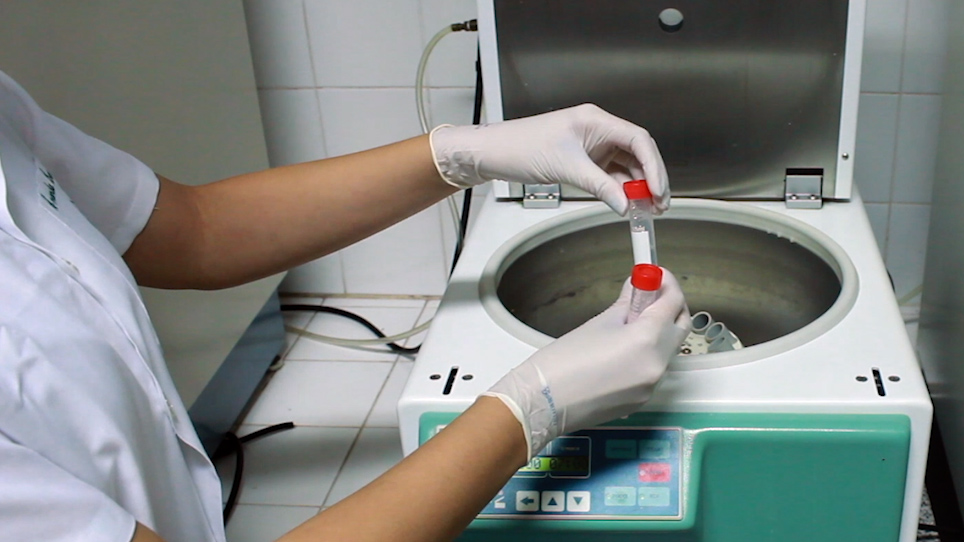