DNA is a versatile building block for the programmable self-assembly of nanoscale structures1. The most popular method for creating DNA nanostructures is the DNA origami technique, which is based on the self-assembly of a long circular, single stranded DNA scaffold with the aid of hundreds of shorter shape-determining synthetic staple strands2. Today, the creation of DNA nanostructures in almost any geometry and morphology is readily feasible. DNA nanostructures can be site-specifically functionalized with high precision3,4 and can be programmed to undergo allosteric conformational changes5,6. Hence, using DNA as a building material offers the unique opportunity to create programmable and responsive custom-designed nanostructures for applications in biosensing, diagnostics and drug delivery. However, DNA nanostructures are susceptible to digestion by exo- and endo-nucleases, and lattice-based 3D DNA origami nanostructures generally require high salinity buffers (e.g., 5-20 mM Mg+2) to maintain their integrity7,8.

The rapid degradation of DNA by nucleases present in blood and the extracellular matrix is a major obstacle to the efficient in vivo delivery of genetic products into cells9. To overcome this limitation, in non-viral gene delivery, DNA is mixed with a cationic polymer at a defined N/P charge ratio (ratio of amines in polycation to the phosphates in DNA)10. The complex of DNA with a cationic polymer, known as polyplex, protects DNA from nuclease-mediated degradation and enhances its cellular uptake11. Inspired by gene delivery advancements, oligolysine12, oligolysine-polyethylene glycol (PEG) copolymers13, poly (2-dimethylamino-ethylmethacrylate) (PDMAEMA)-based polymers14, and virus capsid proteins15 have been used for stabilizing DNA origami nanostructures.

Recently, we reported a method for the protection of DNA origami nanostructures in Mg-depleted and nuclease-rich media using the natural cationic polysaccharide chitosan and the synthetic linear polyethyleneimine (LPEI) was reported16. This article is an adaptation of our earlier work and describes the detailed protocol for the preparation of polyplexes, their characterization, testing the stability of naked and protected nanostructures in low-salt and nuclease-rich media and examining the addressability of enzyme- and aptamer-functionalized DNA origami nanostructures upon polycation coating.

9. Stability of Polyplexes towards DNase I

12. Testing the Addressability of Hemin-binding Aptamers (HBA)-functionalized DNA Origami upon Coating with Polycations

Three DNA origami nanostructures of different configurations were designed, including a nanorod (NR), a nanobottle (NB) and a wireframe nanostructure (WN) (the 3D models of the nanostructures are illustrated in Figure 2). The NR and the NB were designed based on a square and honeycomb lattice, respectively, using caDNAno17 and the WN was created using the Daedalus software18. A comprehensive protocol for the design and self-assembly of DNA nanostructures has been published already19,20,21,22. The shape-specific staple strands were ordered, self-assembled and further purified based on a protocol described by Stahl et al.23 (step 2).

Polyplexes were characterized by the gel retardation assay and nsTEM imaging. Upon mixing the DNA origami with the polycations, a shift in the naked nanostructure band towards the cathode was observed (Figure 1A). This can be attributed to the counterbalancing of the negative charge of phosphate groups upon binding to polycations and the overall size increase of the complex. Adding an extra amount of polyanions such as dextran sulphate can reverse the polyplex formation. In this regard, dextran sulphate of higher molecular weight (MW ~ 40 kDa) showed to be more efficient for the decomplexation compared to lower molecular weight dextran sulphate (MW ~ 4 kDa) (Figure 1B).

While imaging LPEI polyplexes by uranyl acetate negative stain TEM, it was difficult to image any particles. It was hypothesized that LPEI might hinder uranyl acetate from binding to the phosphate backbone due to tight shielding of DNA origami. Therefore, prior to nsTEM imaging, an excess amount of dextran sulphate was added to LEPI polyplexes. The unraveled DNA origami nanostructures showed no sign of defect nor decomposition. In contrary, chitosan polyplexes were successfully imaged with no need for polyanion treatment (Figure 2).

All naked DNA nanostructures (irrespective of their different configurations) were denatured completely after one day of incubation at 37 °C in Mg-zero buffer, as confirmed by nsTEM imaging. In contrast, nanostructures coated with LPEI or chitosan at N/P≥1 remained intact. Similarly, DNase I titration assays showed the susceptibility of unprotected nanostructures towards enzymatic digestion. While naked nanostructures were completely digested in the presence of 1 U/mL DNase I after 2 h, the LEPI or chitosan encapsulated DNA origami stayed intact in Mg-zero buffer supplemented with 10 U/mL DNase I for a minimum of one day (Figure 2). Higher stability towards nucleolytic digestion was achieved by increasing the N/P ratio of the polyplexes. Additionally, LPEI protects the DNA nanostructures more efficiently compared to chitosan (Figure 3A, Figure 3C), probably due to the higher charge density of LEPI, and thus, higher binding affinity towards the DNA24. No difference was observed while using LPEI of different molecular weight (Figure3B).

The addressability of functional groups in DNA nanostructures after encapsulation in a polymer shell is an important feature. Furthermore, the compatibility of polycation coating with the horseradish peroxidase enzyme (HRP) and hemin-binding aptamers (HBA) functionalized DNA origami was examined. Three biotinylated staple strands were protruded from the surface of the NR and then functionalized with HRP conjugated streptavidin (three enzymes per DNA origami). The catalytically highly active (Kd: 439 nM) HBA aptamer PS2.M (5'-GTGGGTAGGGCGGGTGG-3') was chosen for these experiments25. Up to 24 staple strands were protruded from the NR surface with a 5-nm length linker (5'-AAAAGAAAAGAAAAA-3') followed by the PS2.M sequence (24 aptamers per DNA origami). No remarkable hindrance of enzymatic or aptamer activity was observed upon coating HRP- or HBA-functionalized DNA origami with LPEI and chitosan at variant N/P ratios (Figure 4A-B)16. However, the kinetic of HRP enzyme has been dramatically changed after binding to the DNA origami (Figure 4C).

Figure 1: Representative AGE images of polyplex formation and decapsulation. (A) The electrophoretic mobility shift assay for NB mixed with chitosan at N/P ratios of 0.01-8. Each lane contains 1 nmol NB. The first lane is the reference NB. (B) Decapsulation of polyplexes by polyanionic dextran sulphate (DS). This figure has been modified from a previously published figure16. Please click here to view a larger version of this figure.

Figure 2: Negative stain TEM micrographs of DNA origami and polyplexes. 3D model and nsTEM micrographs of naked DNA origami nanostructures (columns 1 and 2). nsTEM micrographs of LPEI polyplexes (after decapsulation) and chitosan polyplexes (columns 3 and 4). nsTEM images of naked and protected DNA origami (polyplex) subjected to Mg depletion (columns 5, 6 and 7), enzymatic degradation (columns 8 and 9), serum digestion (columns 10 and 11) for one day at 37 °C. LPEI-5 kDa was used in this assay. Naked DNA nanostructures were degraded beyond detection on an AGE in the presence of 1 U/mL DNase I or in TB + 10% FBS after 2 h of incubation at 37 °C. Scale bars: 100 nm. This figure has been modified from a previously published figure16. Please click here to view a larger version of this figure.

Table 1. Calculating the number of amine groups per polycation.

Table 2. Calculating the number of sulphate groups per polyanion.

Other methods have been developed for stabilizing DNA nanostructures such as the cyclization of DNA strands via a click reaction26. As alkyne- and azide-modified staple strands are required for the formation of interlocked single-stranded rings, this technique is limited for the stabilization of small nanostructures such a DNA catenane, and it is not readily scalable for larger DNA origami structure such as those used in this protocol. Recently, Gerling et al.27 reported a method for creating covalent cyclobutene pyrimidine dimer (CPD) bonds between neighboring thymidines within DNA nanostructures using ultraviolet irradiation. Although this method is site-selective and scalable, its efficiency in protecting DNA origami is much lower than polycation coating. For example, CPD-stabilized DNA origami objects endure only 0.4 U/mL DNase I for 1 h, while polyplexes were stable in the presence of 10 U/mL DNase I for at least one day.

In brief, gene-therapy inspired chitosan and LPEI coating is a low-cost, one-step and efficient method to address the long-term stability of DNA origami nanostructures in Mg-depleted and nuclease-rich media. The reversibility of the polyplex formation facilitates its application in multi-step diagnostic tests where the protection of DNA origami against nucleolytic degradation or salt-depletion is crucial in one step but may cause problems in other steps such as DNA amplification. Additionally, polycation coating is a potential approach for enhancing the cellular uptake of DNA origami nanostructures for drug-delivery applications28.

The authors declare no conflicts of interest related to this report.

This project has received funding from the European Union's Horizon 2020 research and innovation program under grant agreement No. 686647. TEM images were recorded on a Morgagni operated at 80 kV at the EM Facility of the Vienna Biocenter Core Facilities GmbH (VBCF). We would like to thank Tadija Kekic for assistance in the graphical design and Elisa De LIano for designing the wireframe nanostructure. 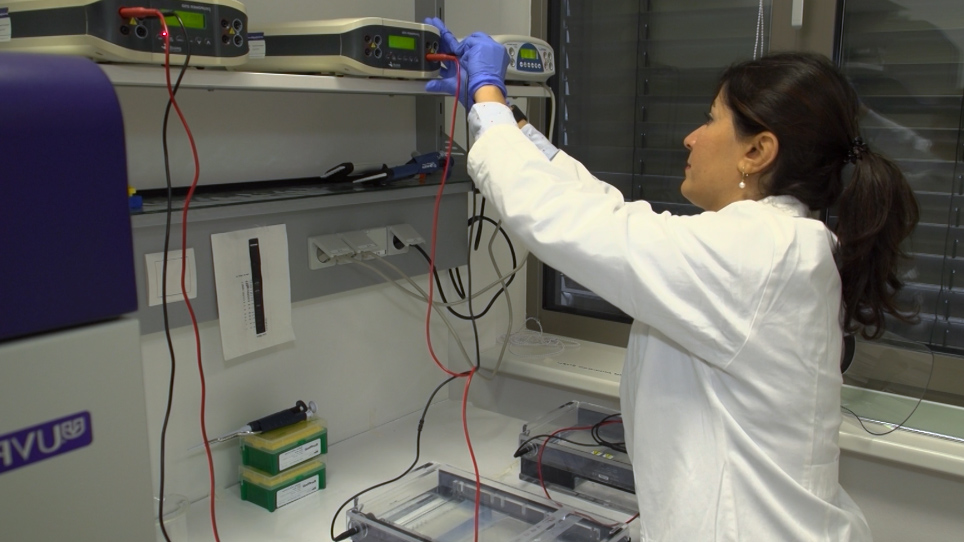