The development of advanced tumor models has long been encouraged because current cancer models have shown limitations such as lack of three-dimensional (3D) tumor architecture and low relevance to human cancer. Researchers have recently developed a 3D in vitro cancer model referred to as tumor organoids that can mimic the characteristics of a native tumor in a culture dish. Here, experimental procedures are described in detail for the establishment of bladder tumor organoids from a carcinogen-induced murine bladder tumor, including culture, passage, and maintenance of the resulting 3D tumor organoids in vitro. In addition, protocols to manipulate the established bladder tumor organoid lines for genetic engineering using lentivirus-mediated transduction are described, including optimized conditions for the efficient introduction of new genetic elements into tumor organoids. Finally, the procedure for orthotopic transplantation of bladder tumor organoids into the wall of the murine bladder for further analysis is laid out. The methods described in this article can facilitate the establishment of an in vitro model for bladder cancer for the development of better therapeutic options.

Bladder cancer is the most prevalent urinary tract cancer, with approximately 165,000 patients dying annually1. Among the various types of bladder cancer, muscle-invasive urothelial carcinoma exhibits an aggressive phenotype, and its 5 year survival rate is lower than 50%2. Novel therapeutic options for invasive urothelial tumors have not been expanded over the last few decades1.

Cancer cell lines have been extensively used for drug screening3. Although favorable results have been observed in numerous drug candidates in cancer cell lines, poor results are reported in clinical trials4. Following increased adaptation to in vitro two-dimensional (2D) culture environments, it has become increasingly difficult to recapitulate native tumors in cell lines. Animal cancer models or patient-derived tumor xenografts can be used to address the limitations observed in bladder cancer cell lines. However, animal cancer models are time and resource intensive. Therefore, improved disease models have been on demand for years and a novel model system, organoids, has been developed to overcome the shortcomings of existing models5.

An organoid is a multicellular 3D construct that can recapitulate in vitro the physiological characteristics of its corresponding in vivo organ. Normal and tumor organoids can be derived from either pluripotent or adult stem cells, and primary tumor cells, respectively5,6. Over the last several years, tumor organoids have been established from a large number of diverse tumor tissues7, including colon8,9, bladder10, pancreas11,12, prostate13, liver14, and breast15 tumor tissues. Such tumor organoids mimic their original tumors phenotypically and genetically. Due to their similarity to in vivo tumor tissues and their numerous practical applications, researchers have adopted them as novel disease models in the study of cancer pathogenesis.

Here, the procedures for the establishment of tumor organoids from a carcinogen-induced murine invasive urothelial tumor16 are laid out. N-butyl-N-(4-hydroxybutyl) nitrosamine (BBN) is used as a carcinogen to induce invasive urothelial carcinoma in mice17 and the tumor organoids, which exhibit the pathological characteristics of mouse muscle-invasive bladder tumors, are established from the BBN-induced murine bladder cancer16. The method to genetically manipulate the tumor organoids is illustrated using lentivirus-mediated transduction to develop a model system for studying the molecular basis of the development of bladder cancer. In addition, a method for transplanting organoids orthotopically into a bladder to investigate the role of the native bladder environment in bladder cancer is described.

All procedures were approved and conducted under the guidelines of the Institutional Animal Care and Use Committee at POSTECH (IACUC number: POSTECH-2019-0055).

In vitro culture of mouse bladder tumor organoids
The number of tumor cells dissociated from an ~1 cm3 BBN-induced tumor is at least 4 x 105 cells. When the cells are initially seeded in the basement membrane matrix, non-cancerous cells and debris may be observed. Debris was gradually diluted out by continuing the subculture. Figure 1B shows images of the cultured organoids at different time points. If the tumor cells do not form tumor organoids, the cells are potentially dead during the dissociation step. In such a case, dissociation procedures including incubation time with the enzyme need to be adjusted to increase cell viability.

Expression of GFP in bladder tumor organoids using lentivirus-mediated genetic manipulation
Bladder tumor organoids exhibited strong GFP signals with successful lentiviral infection (Figure 2B). After concentration, a total of 250 µL of virus-containing media was enough to infect 3 x 104 single tumor cells on the basement membrane matrix, maintaining 90%–100% infection efficiency. GFP signals could be detected from the bladder tumor organoids 3 days after lentiviral transduction. If the fluorescence signals are low, the efficiency of viral infection is potentially low. This can be due to numerous factors, such as low viral titer, and the procedures need to be adjusted accordingly. 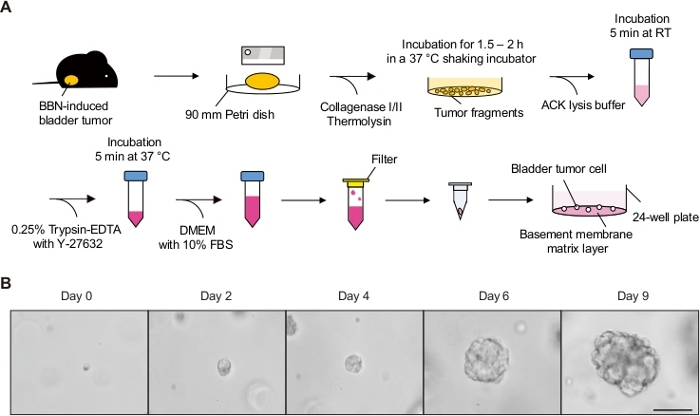 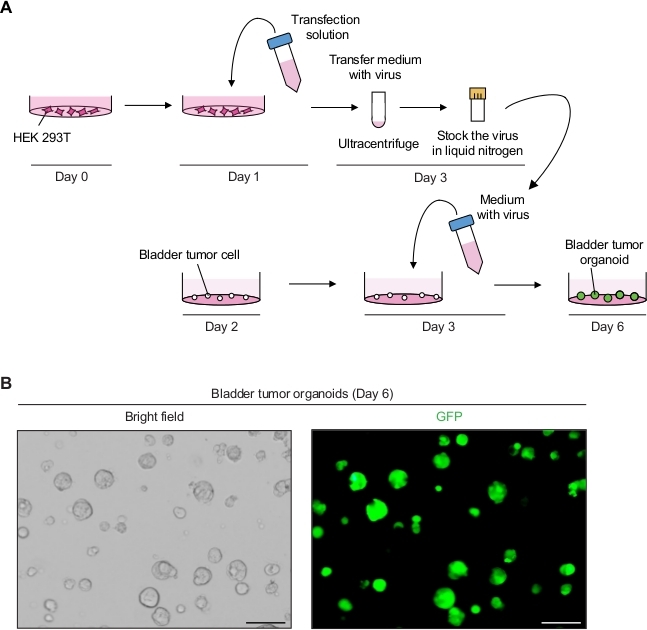 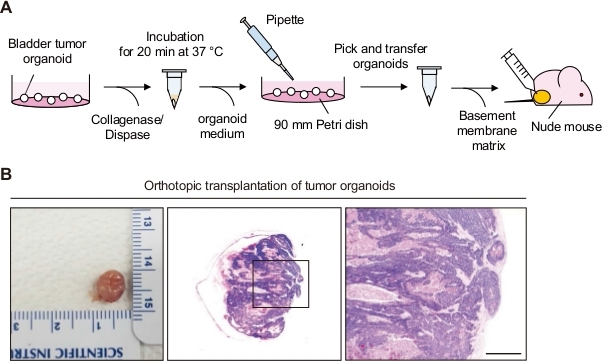 Figure 3: Orthotopic transplantation of bladder tumor organoids. (A) Schematic diagram of orthotopic transplantation of bladder tumor organoids to a nude mouse. (B) Representative images of bladders and H and E stained sections from mice orthotopically transplanted with bladder tumor organoids. Magnified views of the boxed regions in the middle panels are shown in the left panels. Scale bar = 500 µm. This figure was reproduced from Figure 1–Figure Supplement 1, Kim et al.16, published under the Creative Commons Attribution 4.0 International Public License (CC BY 4.0; https://creativecommons.org/licenses/by/4.0/). Please click here to view a larger version of this figure.

In this protocol, there are several experimental steps in which the procedures might need some troubleshooting. First, the number of tumor cells that are initially seeded is a critical factor because low numbers of tumor cells in culture (<2 x 104 cells) mostly lead to cell death due to lack of interactions among tumor cells. In contrast, beginning with too many cells (>5 x 104 cells) at seeding leads to overcrowded organoids, resulting in difficulty when handling cultures with poor growth of each organoid. It is strongly suggested that multiple plates with different numbers of cells be established at the beginning to optimize the experimental conditions. Identifying the right number of initial tumor cells is crucial to achieve the highest cell viability and to establish successful bladder tumor organoids. Also, in long-term culture of over 2 weeks without passaging, most tumor organoids stop growing, potentially due to inadequate supply of nutrients at the center of the organoids and the depletion of growth factor in the basement membrane matrix. Therefore, subculturing organoids in a timely manner is a critical step to maintain tumor organoid culture.

Second, the production of high-titer lentiviral particles is critical for the efficient genetic manipulation of tumor organoids. To troubleshoot virus titer-related issues, it is strongly suggested that the virus titers be determined before viral transduction every time because lentiviral constructs tend to produce viral particles with varying efficiency. If tumor organoids exhibit low viability following viral infection, it is likely that the viral titers are potentially too high. It is strongly suggested to use lower amount of virus in this case. Third, during orthotopic transplantation of BBN-induced bladder tumor organoids, it is critical to maintain the integrity of the bladder wall. In case that the injection reaches the lumen of the bladder by penetrating the bladder wall layer, the experiment should be terminated and discarded. If possible, the monitoring of bladder tumor growth using an ultrasound imaging system is recommended.

One limitation of the current techniques is the absence of the tumor microenvironment or stroma in these organoids. To overcome this issue, it is strongly suggested that the orthotopic transplantation of tumor organoids use an in vivo system to mimic the native tumor microenvironment. In the future, it will be necessary to develop 3D in vitro organoid systems that are composed of tumor organoids with other components of tumor stroma.

One of the major implications of our technique is that, in orthotopic transplantation of tumor organoids, only 10 bladder tumor organoids can induce tumor growth in the bladder. Compared to the conventional tumor transplantation experiments that require 5 x 105–1 x 106 single bladder tumor cells, our methods are much more efficient and robust. Another significant difference is that the organoids can be diversely manipulated using various lentiviral vectors, such as lentiviral constructs containing short-hairpin RNA, the CRISPR–Cas9 system, or genes of interest. These would be powerful tools to add to current organoid technology. Overall, the experimental approaches presented here can facilitate the establishment of in vitro tumor models that can improve our understanding of the pathogenesis of bladder cancer rather than using 2D bladder cancer cell lines.

This method was able to establish bladder tumor organoids derived from a carcinogen-induced murine bladder tumor. The article provides a description of the lentivirus-mediated experimental procedures through which the genetic modifications are introduced and stably maintained in bladder tumor organoids. In addition, a procedure for orthotopic transplantation of tumor organoids is included. In combination with current in vivo cancer models, this technique will be a useful tool to study the molecular basis of bladder tumorigenesis. 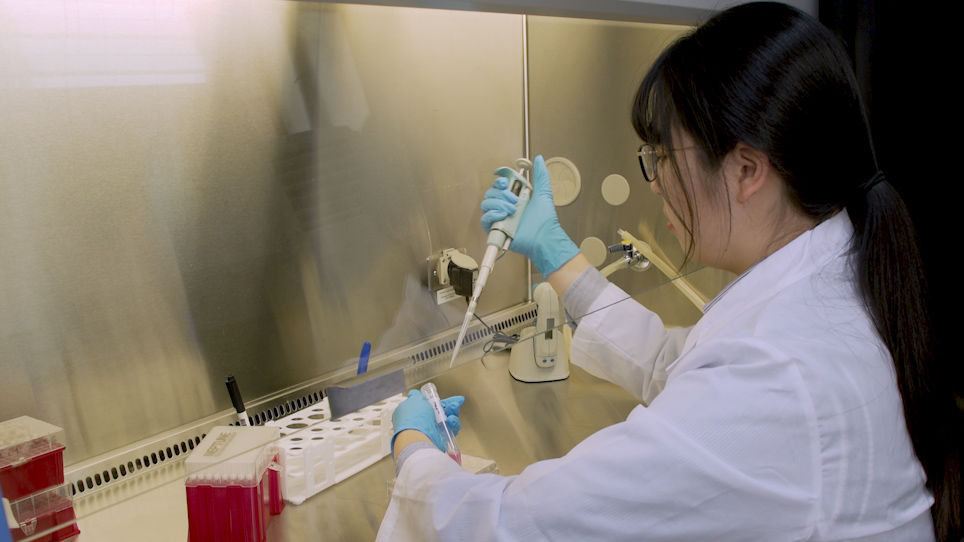