Because of their unique properties, including an ultrathin thickness (3-4 nm), ultrahigh resistivity, fluidity and self-assembly ability, lipid bilayers can be readily functionalized and have been used in various applications such as bio-sensors and bio-devices. In this study, we introduced a planar organic molecule: copper (II) 2,9,16,23-tetra-tert-butyl-29H,31H-phthalocyanine (CuPc) to dope lipid membranes. The CuPc/lipid hybrid membrane forms at the water/air interface by self-assembly. In this membrane, the hydrophobic CuPc molecules are located between the hydrophobic tails of lipid molecules, forming a lipid/CuPc/lipid sandwich structure. Interestingly, an air-stable hybrid lipid bilayer can be readily formed by transferring the hybrid membrane onto a Si substrate. We report a straightforward method for incorporating nanomaterials into a lipid bilayer system, which represents a new methodology for the fabrication of biosensors and biodevices.

As essential frameworks of cell membranes, the interior of cells are separated from the exterior by a lipid bilayer system. This system consists of amphiphilic phospholipids, which are composed of hydrophilic phosphoric ester “heads” and hydrophobic fatty acids “tails”. Due to remarkable fluidity and self-assembly ability of lipid bilayers in aqueous environment1,2, artificial lipid bilayers can be formed using simple methods3,4. Various types of membrane proteins, such as ion channels, membrane receptors and enzymes, have been incorporated into the artificial lipid bilayer to mimic and study the functions of cell membranes5,6. More recently, lipid bilayers have been doped with nanomaterials (e.g., metal nanoparticles, graphene, and carbon nanotubes) to form functional hybrid membranes7,8,9,10,11,12,13. A widely used method for forming such hybrid membranes involves the formation of doped lipid vesicles, which contain hydrophobic materials such as modified Au-nanoparticles7 or carbon nanotubes11, and the resulting vesicles are then fused into planar supported lipid bilayers. However, this approach is complex and time-consuming, which limits the potential uses of such hybrid membranes.

In this work, lipid membranes were doped with organic molecules to produce hybrid lipid membranes that formed at the water/air interface by self-assembly. This protocol involves three steps: preparation of the mixed solution, formation of a hybrid membrane at the water/air interface, and the transfer of the membrane onto a Si substrate. Compared with other previously reported methods, the method described here is simpler and does not require sophisticated instrumentation. Using this method, air-stable hybrid lipid membranes with a larger area can be formed in a shorter time. The nanomaterial used in this study is a semiconducting organic molecule, copper (II) 2,9,16,23-tetra-tert-butyl-29H,31H-phthalocyanine (CuPc), which is widely used in a number of applications, including solar cells, photodetectors, gas sensors and catalysis14,15. CuPc, a small organic molecule with a planar structure, has a high affinity for the “tails” of phospholipids duo to its hydrophobic characteristics. Other groups have reported that CuPc molecules can self-assemble on single-crystal surfaces with the formation of highly ordered structures16,17. Therefore, it is highly possible that the CuPc molecules could be incorporated into the lipid bilayers through self-assembly.

We provide a detailed description of the procedures used to form membranes and provide some suggestions for smoothly implementing this procedure. In addition, we present some presentative results of the hybrid lipid membranes, and discuss potential applications of this method.

1. Preparation of a hybrid solution

2. Formation of a hybrid membrane at the water/air interface

3. Transferring the membrane onto a Si substrate

The as-formed membrane has a uniform light blue color due to the presence of CuPc molecules. The area of the colored membrane is normally several square centimeters. In Figure 1A and Figure 1B, we show a microscopic image and an atomic force microscope (AFM) image (including a height profile) of the hybrid lipid membrane on a Si substrate. In the AFM image, the membrane in the upper left is thick, with a thickness of 79.4 nm and that at the lower right is thin, with a thickness of 4.9 nm. The thin membrane shows a surface roughness of Ra = 0.4 nm, which is close to that of the cleaned Si substrate. In addition, based on multiple measurements, membrane thicknesses show a discrete distribution with 5-nm increments18. Since the reported thickness of a DPhPC lipid bilayer membrane is about 4 nm19, it can be concluded that the 5 nm thin membrane is a CuPc doped lipid bilayer membrane and that the thick membranes are composed of stacks of doped lipid bilayers.

Energy dispersive X-ray (EDX) analysis was used to further investigate the composition of the hybrid membrane on the Si substrate. As calculated from the data shown in Figure 2, the atomic ratios of representative elements such as Cu, P, N and C, are 0.33%, 0.97%, 4.06% and 68.56%. Considering that a molar ratio of 3 to1 (DPhPC to CuPc) was used in preparing the hybrid membrane, the theoretical molar ratio of Cu:P:N:C should be 1:3:11:192, which is close to the measured element ratio in the hybrid membrane, indicating that the ratio between the lipids and the CuPc molecules is maintained after the film formation and transfer processes. 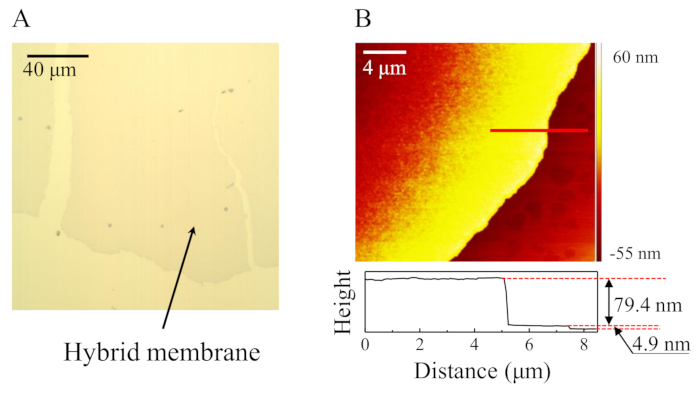 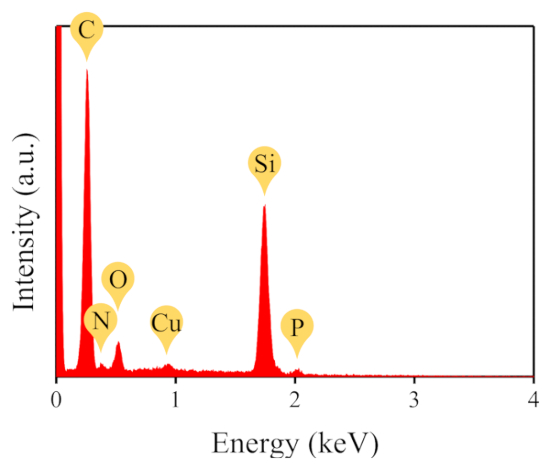 Figure 2: EDX pattern of the hybrid membrane on a Si substrate. Corresponding elements to the features are shown in the figure. Please click here to view a larger version of this figure.

In the precursor solution of the hybrid membrane, a mixed organic solvent (chloroform and hexane) rather than pure chloroform is used to dissolve lipids and CuPc. If pure chloroform is used, the density of the precursor solution would be higher than water. Therefore, it is highly likely that the solution would sink to the bottom of water rather than spread on water surface. Adding hexane, a low density solvent, to the precursor solution, ensures that the solution will float on the water surface and form a uniform hybrid membrane after the evaporation of the solvent. It should also be noted that immediately after the solution comes into contact with the water surface, a slight surface wave was always observed, possibly due to the spreading of the membrane and the organic solvent, which would alter the surface tension of water. Since the hybrid membrane is ultrathin and fragile, a small disturbance would damage the intactness of membrane with visible cracks being formed. Therefore, in order to prevent further damage, it is very important to minimize the airflow around the membrane and to avoid any vibrations of water after the formation of hybrid membranes. If possible, the Teflon beaker should be placed on a vibration isolation table.

The well-established Langmuir−Blodgett (LB) method is widely used to form lipid monolayers at the water/air interface where hydrophilic heads of the lipids are oriented toward the water while the hydrophobic tails are oriented toward the air. Different from the LB method, by doping with CuPc molecules, our method permitted hybrid membranes with a bilayer structure to be formed at the water/air interface in one step. In the hybrid membrane, it is assumed that the hydrophobic CuPc molecules are located between the hydrophobic “tails” of lipid molecules, forming an intriguing lipid/CuPc/lipid sandwich structure. We confirmed this assumption by conducting fluorescence resonance energy transfer (FRET) measurements18.

In addition, we repeated the film formation process using several different molar ratios of DPhPC to CuPc following the same protocol described above. Generally, a low CuPc ratio (e.g., molar ratio of 20:1) resulted in a hybrid membrane with a lighter color and a smaller area than one prepared using a high CuPc ratio (e.g. 3:1 and 10:1). It appears that the CuPc molecules assist in the bilayer formation and also act as an adhesive, resulting in the formation of membranes with large areas. In addition, in the absence of lipid molecules, CuPc molecules tend to aggregate on both the water surface20, and on the solid substrate after the solvent evaporation21. However, in the case of a hybrid membrane, XRD results indicated that the CuPc molecules did not aggregate to form small crystals in the hybrid membrane18. This suggests that the aggregation of CuPc molecules was prevented by the interaction of hydrophobic “tails” of lipids with CuPc. However, when more CuPc molecules were used to prepare a lipid solution (such as a molar ratio of 1:1), the hybrid membranes not only show a darker blue color but CuPc molecules are also visibly aggregated in the membranes. Considering that the size of the CuPc molecule (1.7 nm) is slightly larger than the diameter of the head group of the lipid molecule (about 1 nm), a molar ratio higher than 3:1 tends to result in films that contain aggregated CuPc molecules. The molar ratio of 10:1 that was used in the representative experiments is a tradeoff between the membrane area and undesirable aggregation.

Following the described protocol, hybrid lipid membranes with a sandwich structure were formed at the water/air interface. By doping with CuPc molecules, the hybrid lipid membrane would possess some of functionalities of semiconducting molecules, including optoelectronic and photocatalytic properties, which would significantly expand the applications of lipid bilayer structures. It should be also noted that the doping material is not limited to CuPc molecules. We have also formed similar hybrid membranes with lipid/Pc/lipid sandwich structures by using 2,9,16,23-tetra-tert-butyl-29H,31H-phthalocyanine (H2PC) and zinc 2,9,16,23-tetra-tert-butyl-29H,31H-phthalocyanine (ZnPC) as the doping materials. Other groups have demonstrated that the surface-modified Au-nanoparticles, graphene nanosheets, and fullerenes could stabilize inside the lipid bilayer7,9,12. Therefore, it is possible to dope a lipid bilayer with other hydrophobic molecules and nanomaterials, which would further expand the range of applications of hybrid lipid membranes.

This work was supported by the CREST program of the Japan Science and Technology Agency (JPMJCR14F3) and Grant in-Aids from Japan Society for the Promotion of Science (19H00846 and 18K14120). This work was partly carried out at the Laboratory for Nanoelectronics and Spintronics, Research Institute of Electrical Communication, Tohoku University.