Culex quinquefasciatus is a vector of a diverse range of vector-borne diseases such as avian malaria, West Nile virus (WNV), Japanese encephalitis, Eastern equine encephalitis, lymphatic filariasis, and Saint Louis encephalitis. Notably, avian malaria has played a major role in the extinction of numerous endemic island bird species, while WNV has become an important vector-borne disease in the United States. To gain further insight into C. quinquefasciatus biology and expand their genetic control toolbox, we need to develop more efficient and affordable methods for genome engineering in this species. However, some biological traits unique to Culex mosquitoes, particularly their egg rafts, have made it difficult to perform microinjection procedures required for genome engineering. To address these challenges, we have developed an optimized embryo microinjection protocol that focuses on mitigating the technical obstacles associated with the unique characteristics of Culex mosquitoes. These procedures demonstrate optimized methods for egg collection, egg raft separation and other handling procedures essential for successful microinjection in C. quinquefasciatus. When coupled with the CRISPR/Cas9 genome editing technology, these procedures allow us to achieve site-specific, efficient and heritable germline mutations, which are required to perform advanced genome engineering and develop genetic control technologies in this important, but currently understudied, disease vector.

C. quinquefasciatus, commonly known as the southern house mosquito, is a competent vector of numerous pathogens including West Nile virus (WNV), Japanese encephalitis, Saint Louis encephalitis, and Eastern equine encephalitis. In particular, since it was first detected in New York in 1999, WNV has become a major vector-borne disease throughout the continental United States (US) with over 50,000 reported human cases resulting in around 2,300 deaths between 1999 and 20181 as well as over 4,500 reported equine cases between 2008-20192. In addition, at least 23 bird species found in North America have been impacted by WNV infections with at least 12 species classified as irrecoverable as a result of WNV3. The impact of WNV on human, equine, and avian populations is due to the opportunistic feeding behavior of its vectors. Typically, birds are the primary hosts for WNV, and humans and horses are incidental or dead-end hosts. Some pathogens vectored by C. quinquefasciatus only infect birds such as the avian malaria parasite, Plasmodium relictum. In Hawaii, C. quinquefasciatus is a principal vector of avian malaria and has caused the extinction of many native bird species4,5.

To control diseases transmitted by C. quinquefasciatus, researchers and vector control agencies have used commonly established mosquito population control tools such as insecticide application6, however, these methods are costly, not species-specific, and have limited effectiveness as resistance to insecticides is high in many C. quinquefasciatus populations6,7,8,9. Other control techniques, such as Wolbachia-based population control strategies have been developed in recent years10,11, but the fitness costs associated with Wolbachia infection limit the feasibility of this approach for this vector12. There are also genetic-based control methods that have been developed in other mosquito species such as Aedes aegypti13,14, Anopheles gambiae15 and Anopheles stephensi16, including the development of pathogen resistant mosquitoes17,18,19, that could also be developed for C. quinquefasciatus if the requisite genome engineering tools are developed for this species. However, C. quinquefasciatus biology differs greatly from other Aedes and Anopheles mosquito vectors which has made the development of similar genetic technologies difficult in this vector. With the advent of CRISPR-based genome engineering technologies, precise genome engineering has become increasingly trivial, affordable and adaptable and consequently has led to the development of novel genetic tools in a wide variety of species.

To generate mutations with CRISPR-based technologies, a mixture of Cas9 protein and synthetic guide RNA (sgRNA), complementary to the desired loci, is microinjected into pre-blastoderm stage embryos. Since C. quinquefasciatus females lay their eggs in groups attached in a floating raft structure (Figure 1), as opposed to ovipositing individual eggs, a trait of Aedes and Anopheles mosquitoes, embryo microinjections are increasingly complicated in this species. Culex larvae also emerge from the anterior side of each egg, which is in contact with the water surface (Figure 1), so egg orientation post manipulation is important in this species. Here we describe a detailed protocol designed for the microinjection of Cas9 protein and sgRNA into C. quinquefasciatus embryos. This protocol has been designed to accommodate traits unique to Culex biology in order to improve embryo survival and genome mutation rates through certain steps that are key for timely egg collection and egg survival.

In previously published experiments this method was used to successfully generate somatic and germline mutations of a gene critical for the development of dark eye pigmentation, white (CPIJ005542)30 (Table 1). CRISPR/Cas9 generated somatic mutations were scored by screening for loss of pigmentation in pupal stage eyes of injected individuals (G0). Somatic mutations were generally present as mosaic phenotypes where some but not all the cells have the mutant phenotype. For example, somatic mutations of the white gene resulted in a mixture of ommatidia with phenotypes that lack pigmentation and those with a wildtype pigmented phenotype30. When there was a germline mutation of the white gene, however, the next generation (G1) inherited the full white eyed phenotype. Germline mutation rates were determined by intercrossing mosaic G0 individuals and scoring for completely white eyed offspring (G1). These experiments resulted in a 64% to 82% embryo survival rate, as well as a 37% to 57% somatic mutagenesis rate and a >61% germline mutagenesis rate (Table 1). By multiplexing sgRNAs to target multiple loci in the same gene, somatic and germline mutagenesis rates increased upwards to as much as 86% (Table 1). In addition, for many generations, viable homozygous stocks of the white mutants have been successfully kept in the lab. 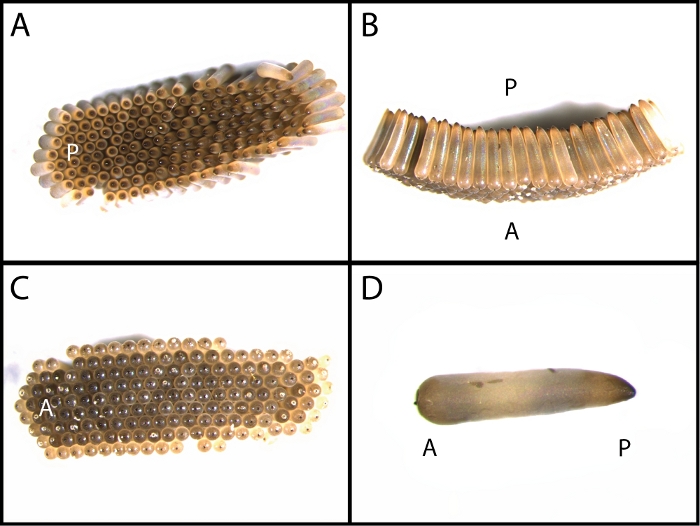 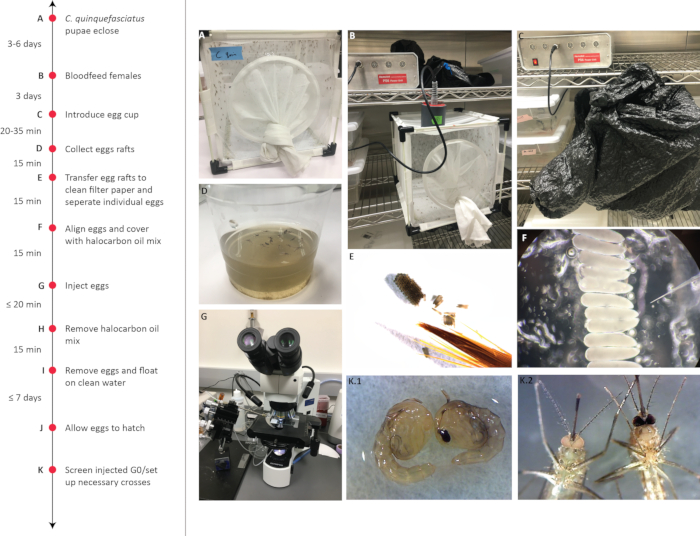 Figure 2: Timeline for creating C. quinquefasciatus mutants by microinjection.
Timeline of C. quinquefasciatus colony preparation and embryo collection for microinjection (A-D). Collected eggs are then separated (E) aligned in the same orientation and covered with halocarbon oil (F). The eggs are then injected (G) and allowed to rest for a minimum of 5 min before removing the halocarbon oil (H). Eggs are then transferred to a clean water source (I) for hatching (J) and screened for mutant phenotypes (K). Please click here to view a larger version of this figure.

Table 1: Survival and mutation rates of embryos injected with single and multiplexed gRNAs targeting white. The table is reprinted with permission from30

With recent efforts to generate genetically engineered tools for mosquito vector control, there is a need to develop and optimize embryo microinjection protocols for common mosquito disease vectors. Although methods have been developed for Aedes and Anopheles mosquitoes, a protocol designed specifically for Culex has been minimally explored. In general mosquito embryo injection protocols can be divided into 3 general steps: 1) embryo collection and preparation, 2) embryo injection, and 3) post-injection recovery. In order to successfully generate mutants, all three steps must be optimized for the target species. This modified protocol for embryo microinjection is specific for successful genome engineering of Culex mosquitoes.

Maximizing embryo collection is a common bottleneck in embryo microinjection protocols. In order to increase the number of eggs collected in a short period of time, mosquitoes were restricted from an oviposition substrate for 2-3 days post blood meal. It is important to note that C. quinquefasciatus tend to prefer avian blood sources as opposed to mammalian sources or membrane feeding with mammalian blood. However, many researchers have difficulty acquiring a reliable source of live avians or avian blood for blood feeding, so laboratory stocks can be adapted to feed on more accessible blood sources. It is also crucial to use nutrient-rich water for the oviposition substrate as it provides oviposition cues for C. quinquefasciatus and most other Culex vectors. There are many methods to generate nutrient-rich water, which may need to be optimized between labs to ensure an appropriate number of eggs are available for microinjection. For example, while this method was the most successful with rabbit feces fermented in deionized water for 5 or more days, other researchers have more success with grass or fish food as the nutrient source and some even with distilled water21.

Since Culex mosquitoes lay groups of eggs in rafts, collecting eggs is fairly simple. Eggs can simply be collected by scooping the entire raft with a paintbrush. Egg separation is more complicated, but essential for successful injection. Eggs can be carefully separated from the raft by applying gentle downward pressure between eggs with paintbrush or forceps. With some practice, multiple users were reliably able to separate single eggs from egg rafts. After separating each egg, the eggs are aligned in the same orientation on double-sided sticky tape, which stabilizes the eggs during microinjection. Eggs are injected into the tapered posterior end and the addition of halocarbon oil keeps the eggs moist during manipulation.

To limit embryo damage during microinjection, injection needles need to be of appropriate strength and beveled at an appropriate angle. Aluminosilicate needles beveled for 10 seconds at a 25˚ angle had the best results, but borosilicate and quartz needles may also work, even though they may be less durable and more expensive. In addition, proper needle beveling facilitates better flow of the Cas9 and sgRNA mixtures and creates a sharper point for easier penetration into the embryo. In many cases, beveling is also an efficient way to quickly fix clogged needles instead of spending the time and effort to replace clogged needles.

After injection, eggs should remain undisturbed for at least 5 minutes with the halocarbon oil being removed immediately afterward by gently brushing it away with a clean paintbrush. Following removal of the halocarbon oil, the injected eggs can be placed in water to hatch, which typically occurs within 3 days post-injection. With practice and sufficient numbers of eggs, this protocol can achieve consistent somatic and germline mutations in C. quinquefasciatus and is versatile enough that it should be easily adaptable to other Culex mosquitoes.

This work was supported in part by UCSD startup funds directed to O.S.A.