Protein phosphorylation is crucial for the regulation of enzyme activity and gene expression under osmotic condition. Mass spectrometry (MS)-based phosphoproteomics has transformed the way of studying plant signal transduction. However, requirement of lots of starting materials and prolonged MS measurement time to achieve the depth of coverage has been the limiting factor for the high throughput study of global phosphoproteomic changes in plants. To improve the sensitivity and throughput of plant phosphoproteomics, we have developed a stop and go extraction (stage) tip based phosphoproteomics approach coupled with Tandem Mass Tag (TMT) labeling for the rapid and comprehensive analysis of plant phosphorylation perturbation in response to osmotic stress. Leveraging the simplicity and high throughput of stage tip technique, the whole procedure takes approximately one hour using two tips to finish phosphopeptide enrichment, fractionation, and sample cleaning steps, suggesting an easy-to-use and high efficiency of the approach. This approach not only provides an in-depth plant phosphoproteomics analysis (> 11,000 phosphopeptide identification) but also demonstrates the superior separation efficiency (< 5% overlap) between adjacent fractions. Further, multiplexing has been achieved using TMT labeling to quantify the phosphoproteomic changes of wild-type and snrk2 decuple mutant plants. This approach has successfully been used to reveal the phosphorylation events of Raf-like kinases in response to osmotic stress, which sheds light on the understanding of early osmotic signaling in land plants.

Sample loss in the multi-step process of phosphopeptide enrichment and fractionation hampers the sensitivity of phosphopeptide identification and the depth of phosphoproteomic coverage. Stop-and-go-extraction tips (stage tips) are pipette tips that contain small disks to cap the end of the tip, which can be incorporated with chromatography for peptide fractionation and cleaning17. Sample loss during the stage tip procedure can be minimized by avoiding sample transfer between the tubes. We have successfully implemented stage tip in Ga3+-IMAC and Fe3+-IMAC to separate low abundant multiple phosphorylated peptides from singly phosphorylated peptides, which improved the depth of human phosphoproteome15. In addition, the use of high pH reversed-phase (Hp-RP) stage tip has demonstrated the wider coverage of human membrane proteome compared to that of strong cation exchange (SCX) and strong anion exchange (SAX) chromatography18. Therefore, integrating IMAC and Hp-RP stage tip techniques can increase plant phosphoproteome coverage with simplicity, high specificity, and high throughput. We have demonstrated that this strategy identified more than 20,000 phosphorylation sites from Arabidopsis seedlings, representing an enhanced depth of plant phosphoproteome19.

To demonstrate the performance of this workflow, we exploited IMAC stage tip coupled with Hp-RP stage tip fractionation to measure the phosphoproteomic changes in wild-type and snrk2-dec mutant seedlings with or without mannitol treatment for 30 minutes. Each sample was performed in biological triplicates, and the experimental workflow is represented in Figure 1. The digested peptides (400 µg) of each sample were labeled with one TMT-6plex channel, pooled and desalted. The phosphopeptides were further enriched using an IMAC stage tip, and the purified phosphopeptides were subsequently fractionated into eight fractions by a Hp-RP stage tip. Each fraction was analyzed by a 90 min LC gradient analysis. The raw files were searched using a search engine against Arabidopsis thaliana database.

Using the data obtained by the workflow, we compared the phosphoproteomic profiles of wild-type and snrk2-dec mutant upon mannitol treatment. A total of 433 and 380 phosphorylation sites were increased after mannitol treatment in wild-type and snrk2-dec mutant sample, respectively (Figure 3). Among that, 312 phosphosites showed induction (FDR < 0.01) in wild-type, but not in snrk2-dec mutant plants. The Gene Ontology (GO) analysis revealed that the function of phosphorylation and activation of protein kinase, regulation of phosphate metabolic process, signal transduction, are significantly enriched in the SnRK2-dependent phosphoproteins. Interestingly, GO term related to root development was also enriched in SnRK2-dependent group, consistent with the phenotype of root growth retardation under osmotic stress6. We also identified 116 phosphosites up-regulated by mannitol treatment in both wild-type and snrk2-dec mutant. These phosphoproteins were independent of SnRK2, or candidates that mediate osmotic stress-triggered signaling prior to SnRK2s activation. We observed that several B4 subgroup RAFs such as RAF18 (AT1G16270), RAF24 (AT2G35050), and RAF42 (AT3G46920), were significantly up-regulated by osmotic stress. Further study revealed that RAF kinases are quickly activated by osmotic stress and required for phosphorylation and activation of SnRK2s20. 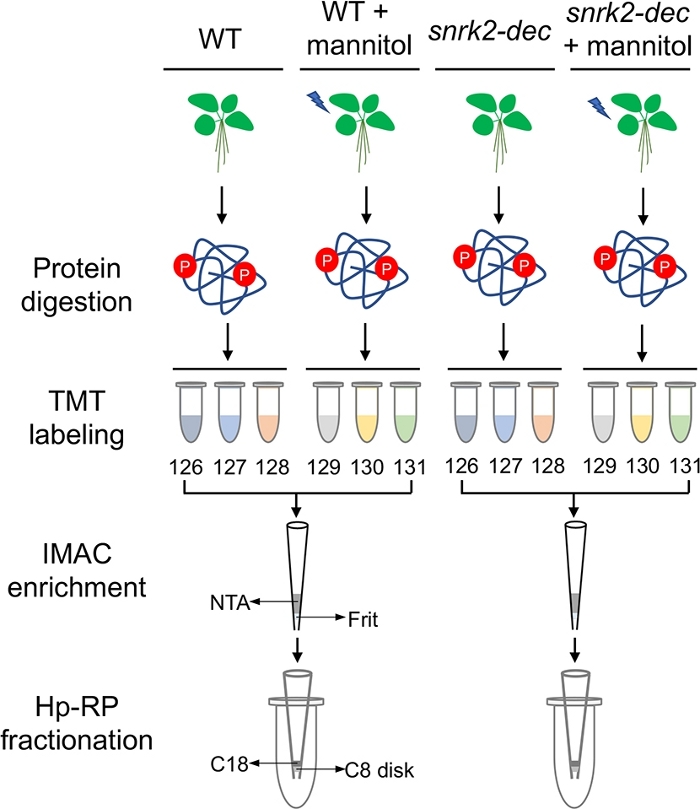 Figure 1: Workflow of stage tip-based phosphoproteomic method. Protein was extracted and digested from wild-type and snrk2-dec mutant seedlings treated with or without mannitol. The digested peptides of each replicate were labeled with a unique TMT6-plex channel. Phosphopeptides were pooled and then enriched using an IMAC stage tip. The purified phosphopeptides were separated by a Hp-RP stage tip. Each fraction was analyzed by mass spectrometer. Please click here to view a larger version of this figure.

Figure 2: Phosphoproteomic profiling of wild-type and snrk2 decuple mutant seedlings by IMAC stage tip and Hp-RP fractionation. (A) The number of identified phosphopeptides per fraction. (B) The separation efficiency of the stage tip-based Hp-RP chromatography. The overlap between the adjacent fractions is represented by the percentage of the same peptide identified in the adjacent fractions. Please click here to view a larger version of this figure. 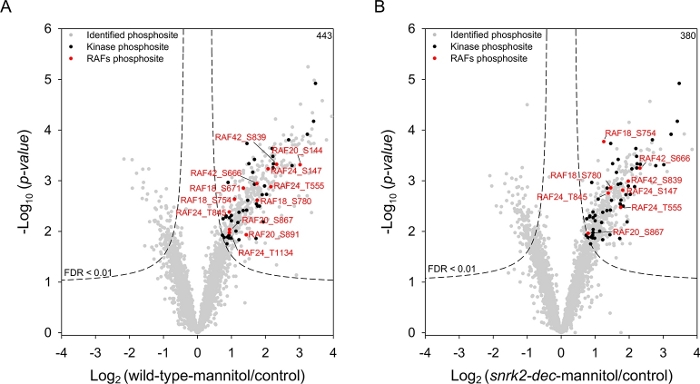 The dynamic range and complexity of plant proteome and phosphoproteome are still a limiting factor to depth of phosphoproteomics analyses. Despite the capability of single run LC-MS/MS analysis to identify 10,000 phosphorylation sites21,22, the coverage of the whole plant phosphoproteome is still limited. Therefore, a phosphoproteomic workflow that provides high sensitivity and superior separation efficiency is required in profiling the global view of plant signaling networks in response to environmental stress. Commercial high-pressure liquid chromatography (HPLC) column-based chromatography is a common method for reducing the peptide complexity prior to MS analysis23,24. However, tedious sample collection steps and large elution volume are the major challenges of HPLC-based methods in terms of sensitivity and throughput. stage tip is an alternative approach to execute peptide pre-fractionation or enrichment for high-sensitivity and high-throughput works. This new phosphoproteomic workflow exploiting isobaric labeling coupled with phosphopeptide enrichment and fractionation provides better coverage and depth of plant phosphoproteomics over other phosphoproteomic workflows25,26.

The pH value of samples is the crucial factor that determines the enrichment specificity of phosphopeptides. The pH value may be affected by the previous step of sample preparation, so it is essential to check the pH value before sample loading. If the pH is shifted, adding acetic acid or sodium hydroxide to samples to adjust the pH to 3.0. We execute this protocol for simultaneous elution and loading of phosphopeptides onto C18 stage tip. Therefore, it is important to equilibrate the IMAC stage tip prior to phosphopeptide elution to ensure the concentration of ACN is below 5%.

The number of fractions is dependent on the complexity and sample sizes. Typically, 5 to 8 fractions are enough to provide broad coverage of phosphopeptide identification in plants. The concentration of ACN in fractionation buffers can be adjusted according to the hydrophobicity of samples. Most of the phosphopeptides are eluted from C18 beads using the range of 5% to 25% ACN concentration. Phosphopeptides typically are more hydrophilic compared to non-phosphorylated peptides due to the additional negative charges of the phosphate group. However, tagging TMT reagent on N-terminus of peptide leads to an increase of hydrophobicity of labeled peptides27, that may explain why fewer phosphopeptides were identified in the first two fractions in our case (Figure 2A). Thus, a test using a TMT-zero reagent and an aliquot of samples can be used to evaluate the number of fractions and the ACN concentration in each fractionation buffers. The optimized buffers may result in better separation efficiency of TMT-6plex labeled phosphopeptides.

The limitations of stage tip-based fractionation are the number of fractions and the capacity of tips. It is difficult to expand the number of fractions in stage tip separation because discontinuous gradient buffers are used for stage tip fractionation. On the other hand, a continuous gradient can be applied to HPLC columns to achieve a high fraction number. The capacity of tips is another factor that limits the application of stage tips. For large-scale phosphoproteomics analysis (> 10 mg proteins) it is better to use HPLC-based enrichment with longer column length packed with more C18 beads and fractionation, which is beyond the analytical scale of stage tips. Taken together, stage tip-based phosphopeptide enrichment and fractionation is a useful method for small to medium scale of phosphoproteomics analyses. This approach can be integrated with isobaric labeling to achieve multiplexed quantification. The results also demonstrated that it could be used for in-depth plant phosphoproteomics profiling and quantification. This workflow is applicable to other species and different tissue types for the delineation of specialized signaling networks.

This work was supported by the Strategic Priority Research Program of the Chinese Academy of Sciences, Grant XDB27040106.