We describe a sterile pericarditis model in minipigs to study atrial myopathy and atrial fibrillation (AF). We present surgical and anesthetic techniques, strategies for vascular access, and a protocol to study the inducibility of AF.

Atrial fibrillation (AF) is the most common arrhythmia caused by structural remodeling of the atria, also called atrial myopathy. Current therapies only target the electrical abnormalities and not the underlying atrial myopathy. For the development of novel therapies, a reproducible large animal model of atrial myopathy is necessary. This paper presents a model of sterile pericarditis-induced atrial myopathy in Aachener minipigs. Sterile pericarditis was induced by spraying sterile talcum and leaving a layer of sterile gauze over the atrial epicardial surface. This led to inflammation and fibrosis, two crucial components of the pathophysiology of atrial myopathy, making the atria susceptible to the induction of AF. Two pacemaker electrodes were positioned epicardially on each atrium and connected to two pacemakers from different manufacturers. This strategy allowed for repeated non-invasive atrial programmed stimulation to determine the inducibility of AF at specified time points after surgery. Different protocols to test AF inducibility were used. The advantages of this model are its clinical relevance, with AF inducibility and the rapid induction of inflammation and fibrosis-both present in atrial myopathy-and its reproducibility. The model will be useful in the development of novel therapies targeting atrial myopathy and AF.

Atrial fibrillation (AF) is the most prevalent cardiac arrhythmia, leading to significant morbidity, mortality, and healthcare expenses1. In many cases, AF is merely the electrical symptom of the underlying atrial myopathy, which is defined by structural, electrical, autonomic, and contractile remodeling of the atria. This atrial myopathy can lead to AF and stroke2,3. Most therapies only target the electrical remodeling but do not target the underlying structural changes in the atria (inflammation and fibrosis)4,5,6,7. This is probably one of the reasons why current therapies are only marginally effective, especially in more advanced atrial myopathy8.

A reproducible animal model is crucial to target the inflammation and fibrosis present in atrial myopathy. Atrial tachypacing models have been developed in several large animal species9,10,11,12. In these models, the atrial tissue is paced continuously for long periods to induce electrical and eventually structural changes. The major disadvantages of tachypacing models are the long duration before structural signs of atrial myopathy appear and their relevance only for clinical syndromes in which electrical abnormalities develop before the atrial myopathy. A theoretical risk is pacing-lead failure due to fibrosis during long follow-up9.

In models of sterile pericarditis, sterile talcum is sprayed over the epicardial surface of the atria to induce an acute inflammatory and fibrotic reaction, resulting in atrial myopathy13,14. Pigs have cardiac anatomy and physiology similar to that of humans, and therefore, porcine models have high translational relevance. The advantages of using minipigs are that they are easier to handle due to their smaller size than conventional pig strains and can be maintained for a long period without any significant increase in body weight10. All these reasons make sterile pericarditis in minipigs an excellent model for the investigation of atrial myopathy and fibrillation. This protocol and video aim to facilitate the setup of this model in different research facilities and standardize protocols to study the inducibility of AF.

4. Atrial tachypacing for induction of AF

Morbidity and mortality:
When we started developing this model of sterile pericarditis in Aachener minipigs, we noticed perioperative mortality of 4 out of 17 pigs (23.5%): 3 out of 4 deaths occurred in the first 6 surgeries because of a "learning curve effect." The etiologies were the following: 2 pigs died because of postoperative respiratory arrest; this problem was solved by reducing the dose of alfentanil. One pig died because of ventricular fibrillation during the first pacing session and one during the testing of the pacing lead: this was due to ventricular overcapture because the left atrial lead was placed too close to the ventricle. During the follow-up period, all animals survived until sacrifice. Further, signs of discomfort disappeared 24 h postoperatively. If any signs of discomfort persist after this time, the investigator should be suspicious of complications.

Pacing properties:
A gradual increase in the voltage threshold and impedance of the left atrial lead were observed during the experiment (Figure 2A). However, this varied among animals and never led to non-capture. AF inducibility began to increase two weeks after surgery up to ~25% on average. The "AERP + 30 ms" protocol was the least effective, showing AF inducibility ~10%. Decremental pacing and 50 Hz burst pacing increased AF inducibility to ~40% (Figure 2B). 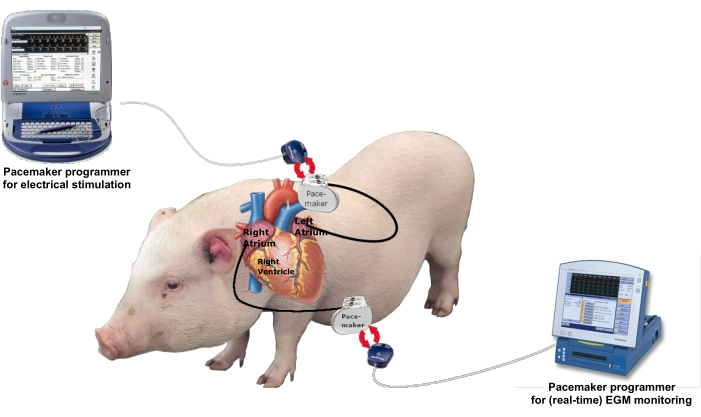 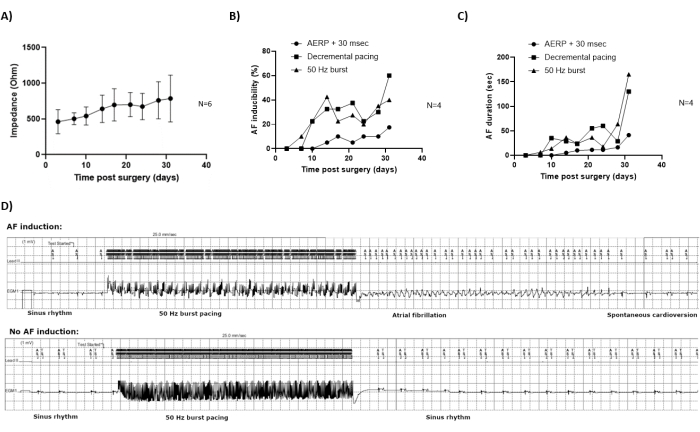 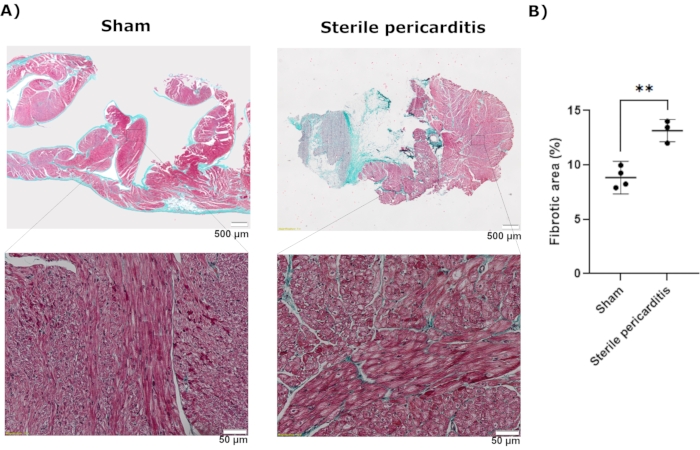 A reliable large animal model is a major asset for the study of atrial myopathy and AF and the development of novel therapies for AF. Implantation of pacemaker leads on the atrial epicardium allowed a longitudinal follow-up and repetitive electrophysiologic testing, which is difficult in small animals. Minipigs are easy to handle, and their hearts are structurally and physiologically similar to the human heart10.

The sterile pericarditis model is relatively straightforward compared to continuous atrial tachypacing because no customized programmed pacemakers are needed. The pathophysiology induced in this model also more closely resembles the pathophysiology often observed in humans, as inflammation and fibrosis precedes the induction of AF2. Other models, wherein AF is secondary to ventricular dysfunction or mitral valve regurgitation, tend to be more complicated to develop, and the presence of a non-atrial primary disease confounds the interpretation of effects induced by therapeutic interventions.

To the best of our knowledge, Schwartzman et al.14 were the only other investigators who induced sterile pericarditis in pigs. In that study, AF inducibility was higher (10%) immediately after surgery and rose to 80% after 1 week postoperatively. In contrast, AF inducibility only rose after 2 weeks and did not exceed 40% in our model. A possible explanation is the older age and greater body weight of their pigs, as well as the higher talcum dose that they used, which makes their model a more acute and aggressive model. Lower talcum dose and younger animals are probably also why the AF inducibility rises later and is lower in this study.

For smooth execution of this protocol, an experienced (cardiac) surgeon and animal anesthesiologist should be involved. Surgically, the anatomy of the minipig is close to that of humans. As described in the protocol, an ultrasound-guided placement of the arterial catheter makes the procedure less invasive, painful, and time-consuming18.

In the earlier stages of the project, a pacing lead was tunneled to the back of the animal and externalized to connect it to a programmable external cardiac stimulator (see the Table of Materials). However, despite the rigorous fixation of these leads, they were often extracted by the animals themselves, and some leads got infected, leading to purulent pericarditis. Therefore, the strategy was adapted to the described two-pacemaker strategy. Critical steps are intubation, central venous catheter placement, pacing lead implantation, and recovery after anesthesia.

Principal anesthetic concerns are hypotension, hypothermia, and cardiac dysrhythmia caused by manipulation. These must be monitored closely and managed by administering fluid boluses and norepinephrine, heating pads, and the presence of emergency drugs and a defibrillator. Some tips and tricks have been included throughout the protocol, with an emphasis on the importance of a supervised postoperative recovery (requiring patience) and temperature management to ensure a rapid and full recovery. The length of the procedure from sedation until extubation ranges from 3 to 6 h.

There are some limitations to the present protocol. As with any large-animal model, a major limitation is the overall cost. Substantial investments must be made in specialized infrastructure for the housing of the animals and equipment of the operating theater. The animals and consumables are expensive as well. Nevertheless, the sterile pericarditis model is substantially cheaper than atrial tachypacing models because of the short duration and because no modification has to be made to the pacemakers. Compared to small-animal models, the present protocol is also labor-intensive, limiting the overall N-value that can be achieved. However, this model has a higher translational value, based on the larger size of the atria and anatomy and physiology closer to that of humans.

None of the authors have any conflict of interest to disclose.

This work was supported by an Industrieel OnderzoeksFonds/Strategisch Basisonderzoek (IOF/SBO) research grant (PID34923) and a Geconcerteerde Onderzoeksactie (GOA) grant (PID36444) of the University of Antwerp; by a Senior Clinical Investigator fellowship (to VFS) and research grants of the Fund for Scientific Research Flanders (Application numbers 1842219N, G021019N, G0D0520N, and G021420N); by a research grant of ERA.Net RUS Plus (2018, Project Consortium 278); by a Vlaamse Interuniversitaire Raad/Interuniversitair Bijzonder OnderzoeksFonds (VLIR/iBOF) grant (20-VLIR-iBOF-027). We thank the firms Abbott and Boston Scientific for sponsoring a large part of the pacemaker leads and the firms, Medtronic and Biotronik, for the loan of a pacemaker programmer. We thank the animal staff of the University of Antwerp animal facility for their excellent care of the animals.