Hydrogen sulfide (H2S) is a toxic gas produced by bacteria in the proteolysis of sulfur-containing amino acids and proteins that plays an important role in human health. The H2S production test is one of the important bacterial biochemical identification tests. The traditional methods are not only tedious and time-consuming but also prone to inhibition of bacterial growth due to the toxic effect of heavy metal salts in sulfur-containing medium, which often leads to negative results. Here, we established a simple and sensitive method to detect H2S in bacteria. This method is a modified version of bismuth sulfide (BS) precipitation that uses 96-well transparent microtiter plates. Bacterial culture was combined with bismuth solution containing L-cysteine and cultivated for 20 min, at the end of which a black precipitate was observed.The visual detection limit for H2S was 0.2 mM. Based on the visual color change, the simple, high-throughput, and rapid detection of H2S producing bacteria can be achieved. In summary, this method can be used to identify H2S production in bacteria.

Hydrogen sulfide producing bacteria can utilize sulfur-containing amino acids and proteins to produce hydrogen sulfide (H2S). The production of H2S occurs usually in gram-negative Enterobacteriaceae family bacteria and also in members of Citrobacter spp., Proteus spp., Edwardsiella spp., and Shewanella spp.1. These bacteria have the ability to reduce sulphate into hydrogen sulfide (H2S) in order to obtain energy. Hydrogen sulfide has been implicated in the development of bacterial drug resistance. H2S protects bacteria from the toxicity of reactive oxygen species (ROS), thus antagonizing the antibacterial effect of antibiotics2,3. H2S also has an important physiological effect in maintaining homeostasis. At supraphysiological levels, H2S has been shown to be profoundly toxic to the body. In the human body, H2S has another role as a gas signaling molecule that is involved in a variety of physiological and pathological processes. H2S can regulate the systolic function of the heart and plays an important physiological role in relaxing blood vessels, inhibiting vascular remodeling, and protecting the myocardium4,5. H2S also plays an important role in regulating the nervous system and digestive tract6,7. It has been found that, when exposed to bactericidal antibiotics, bacteria produce lethal reactive oxygen species (ROS) leading to cell death8,9,10,11.

As a common biochemical test in microbiological laboratory courses, the hydrogen sulfide test is an important experiment in the identification of bacteria, especially bacteria of the family Enterobacteriaceae. At present, the hydrogen sulfide test is usually performed on a large number of sulfur-containing amino acids and lead acetate medium inoculated with the bacteria to be tested. After a period of incubation (2-3 days), the results are judged by observing whether the culture medium or lead acetate paper strip is blackened because of lead acetate production11. However, these traditional methods are not only tedious and time-consuming but also prone to inhibition of bacterial growth due to the toxic effect of heavy metal salts in sulfur-containing medium, which often leads to negative results. A bismuth-based method has been established for the detection of H2S12,13. H2S can react with bismuth, forming black bismuth sulfide precipitation. In order to conduct a reform for this biochemical test, a simple and quick method with no side effects on bacterial growth needs to be established. Here, we set up a simple method for the detection of hydrogen sulfide producing bacteria grown in an in vitro environment using bismuth sulfide as a substrate in a 96-well microtiter plate format.

Sensitivity of the method
The sensitivity was determined by mixing different concentrations of sodium hydrosulfide (NaHS) with BS solution. Visual inspection revealed that the color depth of the solution deepened with an increasing ion concentration of HS−/S2− (Figure 2). The detection limit of H2S for the method is 0.2 mM.

Figure 1: Detection of hydrogen sulfide producing bacteria. The production of H2S in Fusobacterium nucleatum was detected by the black BS precipitate formation. Please click here to view a larger version of this figure. 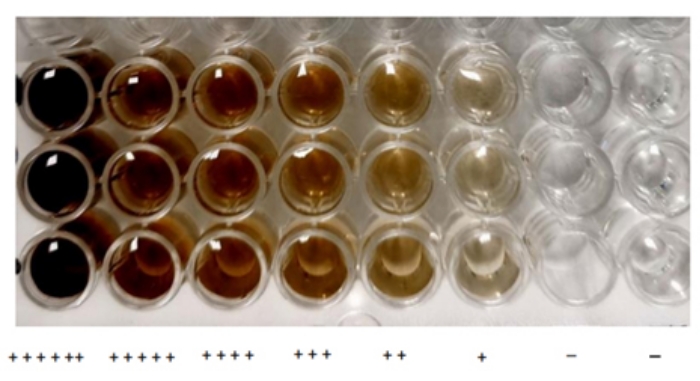 Table 1: Visual assessment of H2S production. The production of hydrogen sulfide (H2S) by different bacterial strains was measured using the visual method in a 96-well microtiter plate. a: Recorded as black bismuth sulfide (BS) precipitation from no color production (-) to black color production (+).

The hydrogen sulfide production test is one of the conventional phenotypic tests for the identification and differentiation of bacterial strains. Many bacterial species can produce hydrogen sulfide in their natural environment, such as aquatic water. These bacterial species include Salmonella sp., Citrobacter sp., Proteus sp., Pseudomonas sp., some strains of Klebsiella sp., Escherichia coli, and some species of anaerobic Clostridia15,16. However, the sensitivity of the traditional H2S test method is low, and the method is time-consuming17,18. The traditional H2S test medium contains PbAc, which has toxic effects on the growth of bacteria, and the culture is puncture-inoculated into semi-solid agar. The oxygen content in the lower part of the medium is low, so the aerobic bacteria grow poorly. Therefore, it often leads to false-negative results.

In this method, we used bismuth (III) instead of lead or ferrous ions. When a bacterial isolate producing H2S is exposed to bismuth (III) chloride, a substitution reaction takes place. In this reaction, the chloride ion and sulfide ion exchange positions, producing hydrogen chloric acid and bismuth (III) sulfide; this bismuth (III) sulfide product precipitates out of solution as a black solid. The color depth of the black precipitate can be used to some extent to determine the quantity of H2S produced by the bacterial strain. Based on the BS precipitation and the high reproducibility, reliability, and simplicity, themethod shown in the study was established as a hydrogen sulfide test for the detection of H2S producing bacteria . The critical step of this method is that the bismuth solution should be prepared fresh. Compared to the traditional method, there is no heavy metal salt toxicity in the growth of bacteria, and it can also save time for the detection of hydrogen sulfide producing aerobic bacteria.

In this paper, based on the reaction of bismuth (III) chloride and H2S, which produced visualblack BS precipitation, a simple, sensitive, inexpensive, and high-throughput method for the detection of H2S producing bacteria is shown. This method is useful for the rapid detection of contaminated samples.