Arginine methylation is emerging as a key post-translational modification involved in a large range of biological processes. Its study in tissue is often limited by the lack of a specific antibody recognizing the target arginine residue. Proximity ligation assay (PLA) was originally developed to study protein/protein interactions. Here, we describe in detail a PLA protocol dedicated to the detection of arginine methylation that we applied to the glucocorticoid receptor (GR). Having previously shown that PRMT5 dimethylates GRs in cells, we used PLA with a pan symmetrical dimethyl antibody and an anti-GR antibody to measure GR methylation in breast tumors. We demonstrate that PLA offers a unique approach to measure arginine methylation of a target protein, even when the site of methylation has not been identified. This technique could be extended to other post-translational modifications where effective pan antibodies are available. Hence, we detail the PLA technology used to detect arginine methylation in fixed tissue using GR as an example.

Arginine methylation by protein arginine methyltransferases (PRMTs) is an abundant post-translational modification (PTM) involved in numerous biological processes. PRMTs catalyze the transfer of methyl groups from the S-adenosyl methionine to arginine residues. The PRMT family comprises nine members classified according to the type of methylation they perform. All members perform monomethylation (MMA). Type 1 (PRMT1, 2, 3, 4, 6, and 8) PRMTs catalyze asymmetrical dimethylation (ADMA), whereas type 2 (PRMT5 and 9) catalyze symmetrical dimethylation (SDMA), and type 3 (PRMT7) only generate MMA1. By methylating numerous substrates, the different PRMTs regulate a wide variety of important cellular processes such as DNA repair, transcriptional regulation, immune response, RNA processing, and signal transduction2,3. This is particularly true for steroid hormone signaling, where PRMTs modify the activity of steroid receptors by methylating not only the receptors themselves but also their regulators or histones2.

Arginine methylation is largely studied in cancer, as the majority of PRMTs were shown to be overexpressed in cancer in comparison with normal tissues, and their expression is often associated with poor prognosis4,5. Detection of arginine methylation in vivo is essential in understanding cellular functions associated with this modification. This is conventionally achieved by conducting immunohistochemistry (IHC) with a specific antibody recognizing the methylated arginine residue. However, this method is very limited as it is based on the identification of the modified arginine residue and relies on the efficacy of the antibody used. In situ proximity ligation assay (PLA) was initially developed to study protein/protein interactions in fixed cells or tissues6. Interestingly, this technology can also be used to detect PTMs using a pan antibody against the modification of interest, as well as an antibody recognizing the targeted protein. Our team previously adapted this technique to study estrogen receptor alpha (ERα) methylation, using an anti-ERα antibody and an antibody specifically recognizing the methylation site on arginine 2607. Of note, this technique can be extended to antibodies recognizing a special type of methylation even when the methylated residue is unknown. Indeed, several companies supply pan antibodies specifically recognizing MMA, ADMA, or SDMA that can be successfully used to study protein methylation in vivo.

Here, as a proof-of-concept, we present a detailed analysis of GR methylation using SDMA antibody in human breast tumors from experimental design to data analysis.

Written informed consent was obtained from each patient. The study protocol was approved by the institutional ethics committee of the Cancer Research Center of Lyon.

1. Choice of the antibodies

NOTE: The samples are embedded in a gel and then placed in an automated tissue processor for sample dehydration and paraffin embedding.

NOTE: All of the reagents used are included in the PLA kits (Table of Materials). It is recommended to use 40 μL of reagent for 1 cm2 of tissue. All of the incubations need to be performed in a humid environment to prevent excessive evaporation. Do not allow the sample to dry out, as this may lead to background noise. It is recommended to use 1x buffer A (in situ wash buffer, Table of Materials) for the washes in the jars. There should be a minimum volume of 70 mL in the jars when incubating samples under agitation. Samples should be kept at RT before use.

NOTE: Quantification of samples was performed using ImageJ software8. FIJI, an ImageJ distribution including ImageJ and other pre-installed plugins, was used for the subsequent analyses9,10.

Using the procedure described above, it is possible to detect and quantify the methylation of a protein of interest. Here, we show the example of the methylation of GR by PRMT5. The antibodies and the experimental conditions for PLA were previously applied to cells10. Briefly, primary antibodies targeting GR and SDMA are recognized by proximity probes conjugated with complementary oligonucleotides. Then, the hybridization of a circular DNA probe occurs when the proteins are in close proximity. Subsequent amplification of this DNA is visualized by HRP under bright-field microscopy (Figure 1). The ideal conditions to detect GR and PRMT5 by IHC were first analyzed in several breast tumors (Figure 2). For detecting GR methylation, we used primary antibodies raised in different animal species recognizing GR (mouse) and pan SDMA (rabbit); a subsequent PLA experiment was performed as previously described, and images were acquired (Figure 3A). Quantification was performed to determine the number of dots per cell using ImageJ software (Figure 3B). 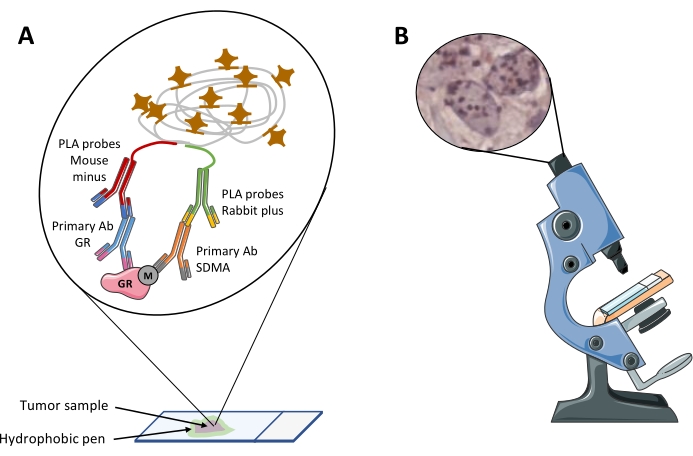 Figure 1. Schematic diagram of the PLA technique. (A) Primary antibodies raised in different animal species recognizing GR and pan SDMA are incubated on the slides containing the fixed tissues. PLA probes containing secondary antibodies then link to short complementary oligonucleotides recognizing primary antibodies. After annealing and ligation, the signal is amplified and detected by colorimetry. Each brown dot represents an arginine methylation event. (B) Images were acquired using a bright-field microscope. Please click here to view a larger version of this figure. 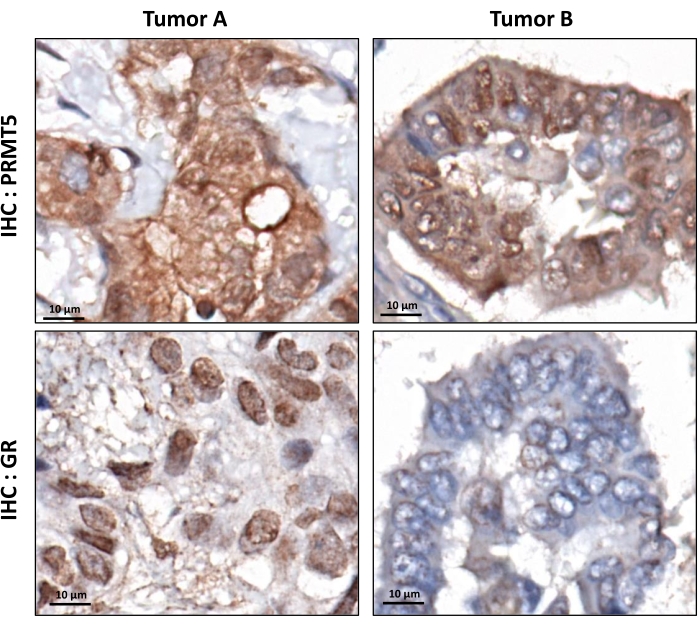 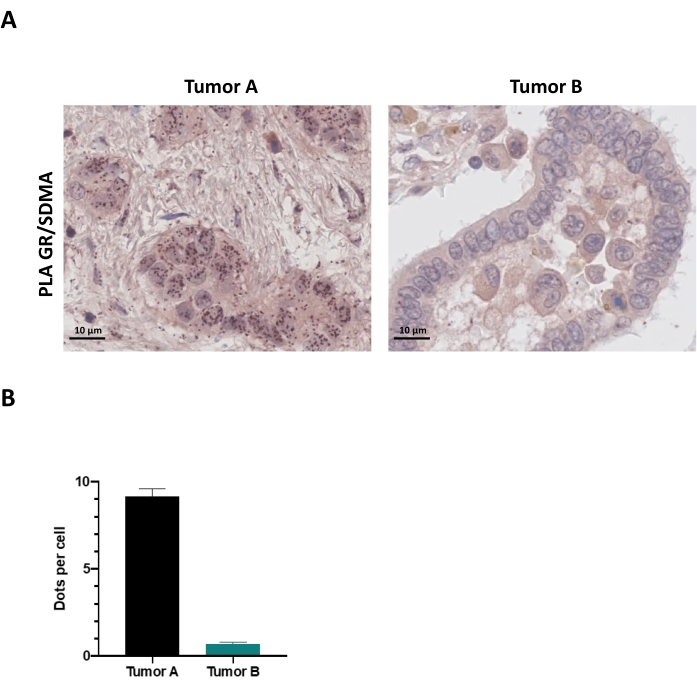 Figure 3: GR methylation in breast tumor samples. (A) PLA was performed on the same tumors presented in Figure 2 using the GR antibody (1/75) and the SDMA antibody (1/100). Tumor A shows brown dots reflecting GR methylation, whereas tumor B shows no staining, meaning that GR is not methylated in this sample. Objective: 40x. (B) Quantification of the number of dots is performed using an algorithm in ImageJ. Please click here to view a larger version of this figure.

Arginine methylation, like other PTMs, contributes to the fine regulation of protein functions. However, its impact is underestimated due to the difficulty in assessing these modifications, primarily because of a lack of tools. This is particularly true when studying methylation in vivo, where the only way to measure arginine methylation is to possess specific antibodies recognizing the methylated residue of the protein of interest. This clearly constitutes a limitation as the methylated arginine residue must be known, and a specific effective antibody for the modification must be available for IHC application, which is rarely the case.

However, even though this technology is powerful, there are some limitations that one should be aware of before starting the experiment. The choice of primary antibody is crucial for PLA in cells and even more so in tissues. To maximize the success rate, choose antibodies that are validated in IHC and respect the dilutions proposed. Optimization could first be conducted in cells that express the protein of interest or not, or after inhibition of the target and of the PRMT involved in the methylation (or inhibitor targeting their enzymatic activity). It is possible to fix cells in formalin and embed them in paraffin to conduct experiments in tissue. Indeed, fixation is also a very important step; although formalin-fixed tissues provide good results, Bouin and acidified formol alcohol are not compatible with PLA on tissue.

In addition, as most commercially available pan methyl antibodies arise from rabbits, this implies that the antibody raised against the protein of interest must come from a different species. Here, the GR antibody we used was produced in mice.

Another constraint of the method is that, as heat-induced epitope retrieval is to be conducted before starting PLA experiments, the two antibodies have to work at the same pH. If the optimal pH values are not compatible, it will be necessary to test a range of pH values for each antibody and choose the best pH for both antibodies.

In conclusion, the technique presented here offers a unique opportunity to localize within cells and quantify protein methylation in vivo. Interestingly, this technique can be extended to other PTMs as long as effective pan antibodies recognizing the desired modification are available.

The authors declare that they have no conflict of interest

We would like to thank B. Manship for proofreading the manuscript. We acknowledge Laura Francols, Clémentine Le Nevé, Research pathology platform (CRCL) for technical help. Figure 1 was created using Servier Medical Art. This study was supported by the Ligue Inter-régionale contre le Cancer and the Association: 'Le Cancer du sein, parlons-en.'