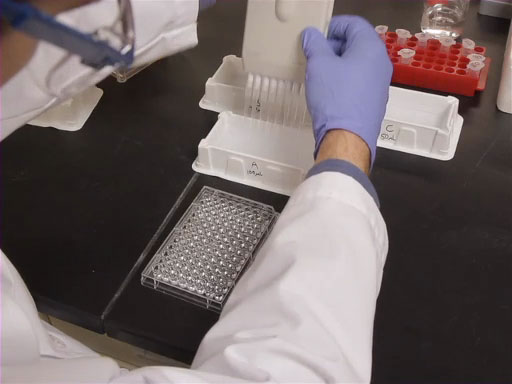 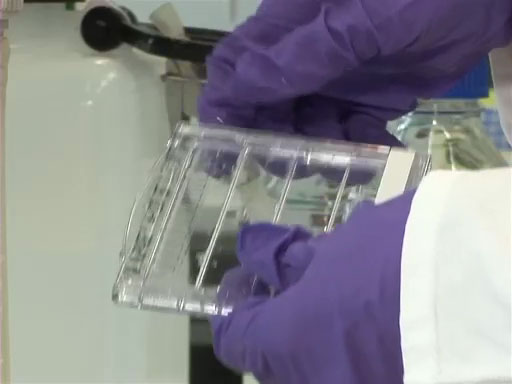 The polymerase chain reaction, or PCR, is a technique used to amplify DNA through thermocycling – cyles of temperature changes at fixed time intervals. Using a thermostable DNA polymerase, PCR can create numerous copies of DNA from DNA building blocks called dNTPs. There are three steps in PCR: denaturation, annealing, and elongation. Denaturation is the first step in the cycle and causes the DNA to melt by disrupting hydrogen bonds between the bases resulting in single-stranded DNA. Annealing lowers the temperature enough to allow the binding of oligonucleotide primers to the DNA template. During the elongation step DNA polymerase will synthesize new double-stranded DNA.

This video provides an introduction to the PCR procedure. The basic principles of PCR are described as well as a step-by-step procedure for setting up a generalized PCR reaction. The video shows the necessary components for a PCR reaction, includes instruction for primer design, and provides helpful hints for ensuring successful PCR reactions.

The polymerase chain reaction or PCR is a widely used method for amplifying DNA fragments. PCR uses thermocycling, which is the repeated heating and cooling of the reaction via three distinct temperatures called denaturation, annealing and extension or elongation.

The thermocycling reaction begins once the PCR reagents are put into a thermocycler a machine, which is programmed to precisely heat and cool the reaction.

The PCR cycle begins with denaturation, which occurs for 20 to 30 seconds at 95 °C, well above the melting temperature of DNA. The melting temperature is a state where half of the DNA is a double stranded helix and the other is a single stranded random coil. The denaturation temperature is well above the melting temperature, in order to ensure that all the hydrogen bonds between complementary base pairs are broken yielding only single stranded DNAs. Paired single strands are termed the sense and antisense strands. The sequence of the sense, or coding strand, is identical to the sequence of mRNA, which will ultimately code for protein. Therefore, it makes sense. When read from left to right it begins with the 5’ phosphate and ends with the 3’ hydroxyl. The antisense strand is also called the complementary strand and begins with 3’ hydroxyl and ends with the 5’ phosphate when read from left to right.

Once the primers bind to DNA they prime the reaction by creating a 3’ hydroxyl group end to which a polymerase, an enzyme that replicates DNA, will bind.

The next step called elongation or extension occurs at 72 °C, which is optimal for polymerase activity. Once bound the polymerase begins to add free nucleotide triphosphates, or dNTPs, to the ends of the primer one at a time in the 5’ to 3’ direction to make double stranded DNA.

Once elongation completes the next cycle begins. In the next cycle primers will bind to single stranded DNA formed via previous extension. The short fragment you are trying to amplify, the amplicon, will ultimately form when the polymerase extends from the forward primer on a strand that was generated by amplification from the reverse primer or vice versa. Once generated, the amount of amplicon will increase exponentially in subsequent cycles. Depending on the goal of your reaction, 20 to 40 cycles will be needed.

For long amplicons, a final elongation step is typically run at 72 °C for 5 to 15 minutes in order to ensure all DNA is double stranded. Usually, a final hold step at 4 °C is programmed into the thermocycler as a precautionary step to ensure that the DNA remains stable until taken out of the thermocycler.

The PCR reaction requires several key reagents. First is the DNA template, which is the DNA sample from which your fragment will be amplified. Then there are your primers, which are the short pieces of DNA or oligonucleotides that prime the polymerase reaction.

There are several important considerations that need to be taken when choosing your primers. First, they must be complementary to the 5’ and 3’ regions of your DNA template that flank the sequence you want to amplify. Second, they should be between 15 and 30 base pairs long and be comprised of about 50% guanines and cytosines. Third, the melting temperatures of both primers should be above 50 °C and within one to two degrees of each other so they can efficiently bind at the same annealing temperature. Fourth, they can’t be complementary to each other and form primer dimers. And fifth, they should not contain secondary structure, which is form by self-annealing within one of the primers.

In addition to the primers and DNA template, DNA polymerase is essential for the PCR reaction. The enzyme most commonly used in PCR is Taq polymerase, which is a thermostable enzyme isolated from the bacterium Thermus aquaticus that makes its home in hot springs. Taq polymerase can withstand temperatures greater than 90 °C.

dNTPs, which will comprise the base pairs in the growing strands, must also be added to the reaction. A reaction buffer, which maintains pH and contains important ions like manganese, magnesium and potassium, is also a necessary reaction component that stabilizes the reaction and provides important cofactors to the polymerase enzyme. Like all reactions, PCR needs a solvent, and so PCR grade water, which is free of ions that can inhibit the reaction, is used.

Before beginning the PCR make sure the working environment is clean to avoid contamination. Gloves must always be worn.

To help with keeping track of the various reaction components that you will need. Make a table of reagent volumes and concentrations for each of your samples including controls. In terms of volumes a typical reaction should contain 5μL of 10X reaction buffer, 4μL of 25 mM MgCl2, 1μL of dNTPs at 10 mM, 2μL of forward and reverse primers at 50 ng/μL, and 0.3μL of Taq polymerase at 5 U/μL. You want to add enough template so that 100 ng is present in the reaction. Finally, most PCR reactions are conducted in a total volume of 50μL. So a volume of PCR grade water must be used to ensure the total volume is indeed, 50μL.

Once your reaction is planned on paper assemble your reagents on ice.

Next, add your reagents to the PCR tube. First add water, then your template, your primers, buffer, magnesium chloride, and dNTPs, add Taq polymerase last and mix thoroughly.

After your reaction is setup place your sample in a thermocycler and start your PCR program. Briefly, parts of the machine consist of a thermoblock, where the PCR tube or plate is inserted and subject to precise temperature changes. A heated lid, which prevents condensation so no sample is lost and an interface with a display for programming PCR temperatures and cycle durations. Always setup your program before assembling the reaction.

Once the thermocycler has done its job. Take out your reaction and verify the PCR product with gel electrophoresis. If the PCR is successful, you should see the amplicon at the correct base pair size.

And now for some helpful hints when working with PCR. When you are trying to amplify the same PCR product from a number of different templates and therefore have a lot of different reactions to setup. It is useful to scale up the reaction to create a master mix. The PCR master mix is a large volume mixture of all the reagents shared among your samples, which is later distributed into multiple reaction tubes.

Most PCR reactions begin with an initial denaturation step, which occurs at 95°C for 1 to 9 minutes. This step ensures that all of the template is single stranded for the first amplification cycle.

Often it is desirable to use a PCR cabinet when the risk of contaminating your sample is high. To check for any contamination in your reaction it is beneficial to setup a negative control, which has no DNA template and shouldn’t produce a product in your DNA gel.

Often PCR must be optimized by adjusting temperatures, magnesium chloride concentration, or trying new primers. Once you have your PCR working. It’s a good idea to always run a positive control template, which you know will produce a product.

Many variations and applications of PCR exist for a variety of purposes.

One variation of PCR, hot start PCR, involves withholding the polymerase from the reaction until after the first denaturation step, which prevents nonspecific amplification that might occur before cycling.

In combination with fluorescent oligonucleotide probes, PCR can actually become a technique that can measure relative or absolute levels of gene expression or how much mRNA is produced for a given gene or group of genes. This method is referred to as qPCR.

You’ve just watched JoVE’s introduction to PCR. In this video we reviewed what PCR is and how it works, the many components of the PCR reaction, the mechanism by which PCR can amplify DNA and the many variations and applications of this highly useful technique. Thanks for watching!