Biofilms formed on tooth surfaces are highly complex and exposed to constant innate and exogenous environmental challenges, which modulate their architecture, physiology and transcriptome. We developed a toolbox to examine the composition, structural organization and gene expression of oral biofilms, which can be adapted to other areas of biofilm research.

Biofilms are highly dynamic, organized and structured communities of microbial cells enmeshed in an extracellular matrix of variable density and composition 1, 2. In general, biofilms develop from initial microbial attachment on a surface followed by formation of cell clusters (or microcolonies) and further development and stabilization of the microcolonies, which occur in a complex extracellular matrix. The majority of biofilm matrices harbor exopolysaccharides (EPS), and dental biofilms are no exception; especially those associated with caries disease, which are mostly mediated by mutans streptococci 3. The EPS are synthesized by microorganisms (S. mutans, a key contributor) by means of extracellular enzymes, such as glucosyltransferases using sucrose primarily as substrate 3.

Studies of biofilms formed on tooth surfaces are particularly challenging owing to their constant exposure to environmental challenges associated with complex diet-host-microbial interactions occurring in the oral cavity. Better understanding of the dynamic changes of the structural organization and composition of the matrix, physiology and transcriptome/proteome profile of biofilm-cells in response to these complex interactions would further advance the current knowledge of how oral biofilms modulate pathogenicity. Therefore, we have developed an analytical tool-box to facilitate biofilm analysis at structural, biochemical and molecular levels by combining commonly available and novel techniques with custom-made software for data analysis. Standard analytical (colorimetric assays, RT-qPCR and microarrays) and novel fluorescence techniques (for simultaneous labeling of bacteria and EPS) were integrated with specific software for data analysis to address the complex nature of oral biofilm research.

The tool-box is comprised of 4 distinct but interconnected steps (Figure 1): 1) Bioassays, 2) Raw Data Input, 3) Data Processing, and 4) Data Analysis. We used our in vitro biofilm model and specific experimental conditions to demonstrate the usefulness and flexibility of the tool-box. The biofilm model is simple, reproducible and multiple replicates of a single experiment can be done simultaneously 4, 5. Moreover, it allows temporal evaluation, inclusion of various microbial species 5 and assessment of the effects of distinct experimental conditions (e.g. treatments 6; comparison of knockout mutants vs. parental strain 5; carbohydrates availability 7). Here, we describe two specific components of the tool-box, including (i) new software for microarray data mining/organization (MDV) and fluorescence imaging analysis (DUOSTAT), and (ii) in situ EPS-labeling. We also provide an experimental case showing how the tool-box can assist with biofilms analysis, data organization, integration and interpretation.

Input raw data from biochemical and RT-qPCR assays directly into Raw Data File (RDF-MS Excel file). For microarrays data, load single-channel images of scanned slides into JCVI Spotfinder (http://pfgrc.jcvi.org/index.php/bioinformatics.html) or similar software. Create a spot grid according to JCVI specifications and then manually adjust to fit all spots within the grid. Measure the intensity values of each spot and save into ".mev" files and stored into "Raw Microarray data".

Organize the raw data (biochemical and RT-qPCR) in the RDF for statistical analysis. Transfer them into "Data Processed File" (DPF - MS Excel file). For microarray and fluorescence imaging analysis, specific software (currently available and custom-made) are used to process the data.

Due to complexity and the output of large data sets when using microarrays and multiple experimental conditions, we designed a data mining and organization software named Microarray Data Visualizer (MDV) 7 (available at http://www.oralgen.lanl.gov/).

After carrying out the statistical analysis using BRB-ArrayTools (http://linus.nci.nih.gov/BRB-ArrayTools.html) with a cutoff P value of 0.001 for class prediction and for class comparison, the data generated can be submitted to MDV, as follow:

Here we provide an example of how the analytical tool-box integrates the various assays of a biofilm study with multiple variables and experimental conditions.

Dynamics of Streptococcus mutans transcriptome in response to starch and sucrose during biofilm development 7.

The interactions of dietary starch and sucrose with host salivary amylase and streptococcal glucosyltransferases could enhance the formation and virulence of S. mutans within biofilms by increasing exopolysaccharides synthesis, sugar metabolism and acidogenicity 11. This complex host-pathogen-diet interaction may modulate the formation of pathogenic biofilms related to dental caries disease. We conducted a comprehensive biochemical and transcriptomic analysis (including whole genomic profiling) to further understand how S. mutans responds to starch and sucrose at distinct stages of biofilm development in the presence of amylase 7.

The analytical tool-box was used to assist us in integrating the biochemical and molecular assays of biofilms formed under various experimental conditions and time points. The overall data output using the analytical tool-box is presented in a sequentially manner in Figure 4 (4.1 to 4.4). It is noteworthy that the major focus here is to demonstrate the utility of the tool-box rather than data interpretation and discussion.

Figure 1. Flow-chart of the Analytical Tool-Box for Biofilm Analysis. 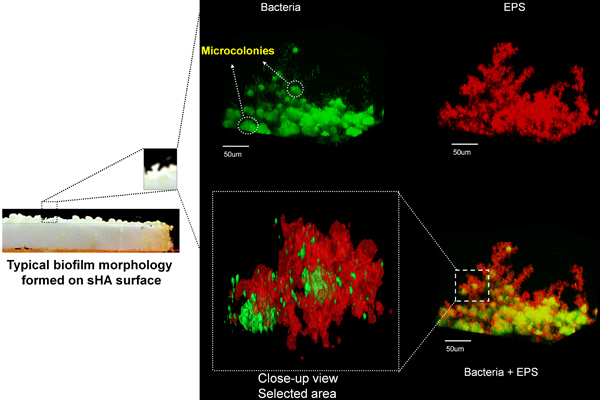 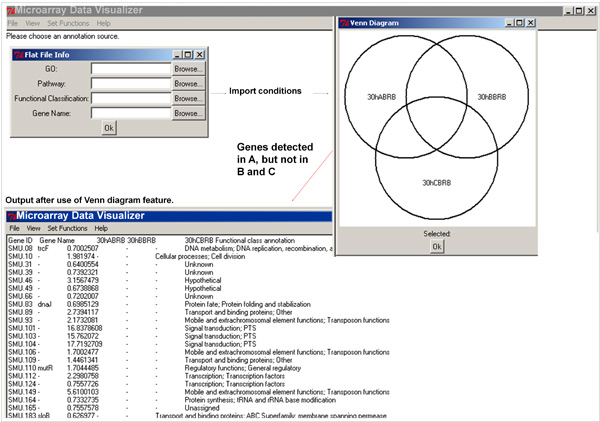 Figure 3. Microarray Data Mining and Organization Using Microarray Data Visualizer (MDV) Software. Use of Venn diagram feature to select out genes of interest, and followed by the addition of gene name and functional class annotation. 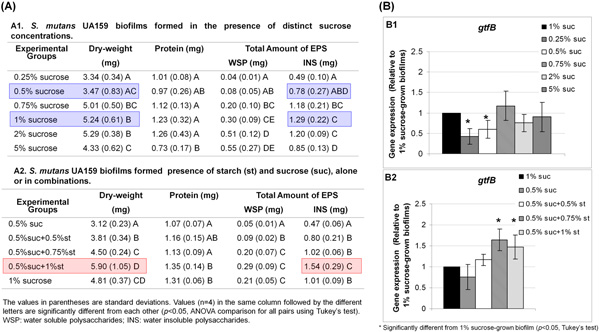 Figure 4.1. Evaluation of biofilm formation by S. mutans using biochemical assays (A) and RT-qPCR (B). The INS (insoluble exopolysaccharides) data correlate well with the pattern of gtfB expression, and with the biomass of the biofilms. Sucrose at 1% was the concentration for maximum INS formation, gtfB expression and biofilm accumulation on the sHA surface whereas 0.5% sucrose was the minimum concentration required for optimum biofilm development using our in vitro model. S. mutans cells grown in the presence of 0.5% sucrose + 1% starch yielded the highest biomass, and presented more INS than other biofilms, which correlated with enhanced gtfB expression (B2). These carbohydrate concentrations were selected for further transcriptome analysis. 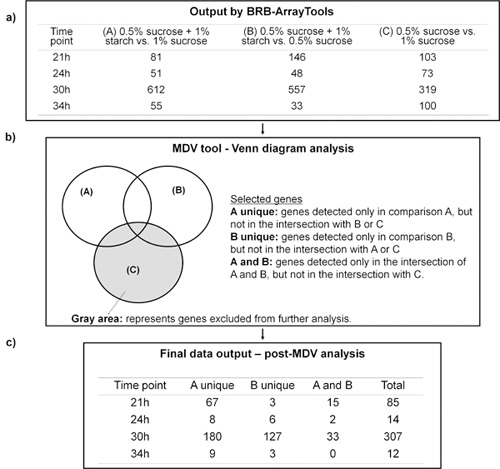 Figure 4.2. Microarray data analysis using BRB-Array Tools in conjunction with MDV software. a) Represent the number of genes detected as differentially expressed in each comparison (A, B or C) and time point evaluated using BRB-Array Tools. b) Microarray Data Visualizer (MDV) using the Venn diagram to select genes of interest. c) Genes selected according to MDV analysis. 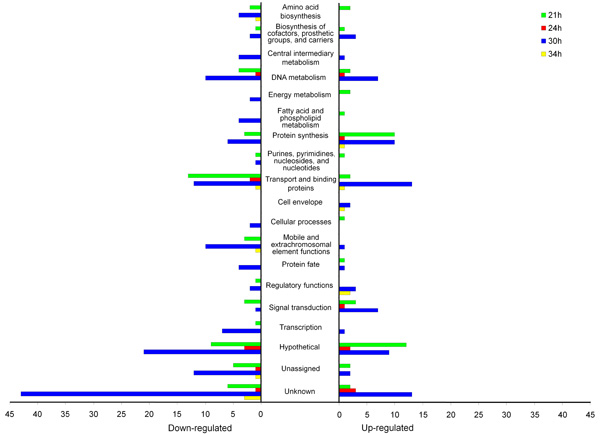 Figure 4.3. S. mutans genes differentially expressed in starch+sucrose-biofilms (vs. sucrose-biofilms) at various time-points organized by functional class. Gene annotations are based on information provided by the Los Alamos National Laboratory (www.oralgen.lanl.gov) or by published literature available at the same Website. 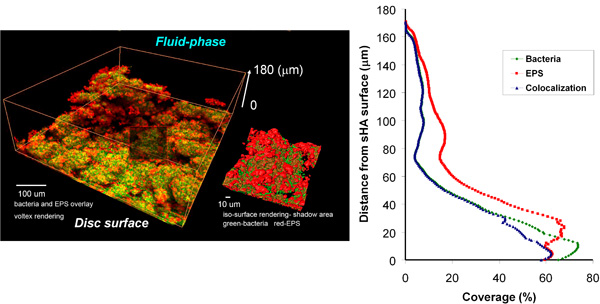 In this presentation, we demonstrated two critical components of the Analytical Tool-Box (EPS/bacteria imaging and microarray data mining/processing), the versatility and usefulness of the various assays integrated in the system. Clearly, the tool-box facilitated the comprehensive (comparative) and simultaneous analysis of the various aspects of the biofilms biochemistry, architecture and gene expression in response to the different experimental conditions using an in vitro model.7 Considering the dynamic and complex changes of the structural organization, physiological and transcriptome responses by S. mutans (and other pathogens) in biofilms, an integrated analysis could help to further understand how biofilms modulate pathogenicity in the oral cavity. We are currently incorporating species-specific labeling and metagenomic/metaprotemic analysis in the Analytical Tool-Box, which would enhance the ability to investigate in more detail the complex ecological interactions and structural changes in our mixed-species biofilm model.5

Furthermore, this tool (and all the bioassays) is flexible, upgradeable with add-ons (such metaproteome and hard-surface analysis; in progress), and can be adapted/modified for applications outside of oral biofilm research. For example, the MDV could be particularly helpful to other biofilm-related fields using whole-genome profiling for comparison of multiple experimental conditions, such as comparative-transcriptome of distinct (mutant) strains or in response to therapeutic agents.

The authors would like to thank Dr. Gary Xie and Herbert Lee for the development of MDV. We also thank Drs. Simone Duarte, Ramiro Murata, Jae-Gyu Jeon, Jacqueline Abranches, and Ms. Stacy Gregoire for their technical and scientific contribution for the analytical components of the tool-box. This study was supported in part by USPHS Research grant DE018023 from the National Institute of Dental and Craniofacial Research.