This protocol illustrates a harvesting technique for coccygeal bovine intervertebral discs for organ culture for in vitro organ culture.

The intervertebral disc (IVD) is the joint of the spine connecting vertebra to vertebra. It functions to transmit loading of the spine and give flexibility to the spine. It composes of three compartments: the innermost nucleus pulposus (NP) encompassing by the annulus fibrosus (AF), and two cartilaginous endplates connecting the NP and AF to the vertebral body on both sides. Discogenic pain possibly caused by degenerative intervertebral disc disease (DDD) and disc herniations has been identified as a major problem in our modern society. To study possible mechanisms of IVD degeneration, in vitro organ culture systems with live disc cells are highly appealing. The in vitro culture of intact bovine coccygeal IVDs has advanced to a relevant model system, which allows the study of mechano-biological aspects in a well-controlled physiological and mechanical environment. Bovine tail IVDs can be obtained relatively easy in higher numbers and are very similar to the human lumbar IVDs with respect to cell density, cell population and dimensions. However, previous bovine caudal IVD harvesting techniques retaining cartilaginous endplates and bony endplates failed after 1-2 days of culture since the nutrition pathways were obviously blocked by clotted blood. IVDs are the biggest avascular organs, thus, the nutrients to the cells in the NP are solely dependent on diffusion via the capillary buds from the adjacent vertebral body. Presence of bone debris and clotted blood on the endplate surfaces can hinder nutrient diffusion into the center of the disc and compromise cell viability. Our group established a relatively quick protocol to "crack"-out the IVDs from the tail with a low risk for contamination. We are able to permeabilize the freshly-cut bony endplate surfaces by using a surgical jet lavage system, which removes the blood clots and cutting debris and very efficiently reopens the nutrition diffusion pathway to the center of the IVD. The presence of growth plates on both sides of the vertebral bone has to be avoided and to be removed prior to culture. In this video, we outline the crucial steps during preparation and demonstrate the key to a successful organ culture maintaining high cell viability for 14 days under free swelling culture. The culture time could be extended when appropriate mechanical environment can be maintained by using mechanical loading bioreactor. The technique demonstrated here can be extended to other animal species such as porcine, ovine and leporine caudal and lumbar IVD isolation.

Outcome measurements to judge a successful intervertebral disc preparation can be a diffusion experiment where a small molecular weight fluorescent dye (e.g. procion red) is prepared as a 1% solution in PBS2. The IVD is then kept with at least 100 mL of dye solution and the dye is then allowed to diffuse passively into the IVD for 24h under free swelling. The IVD is then flash-frozen in liquid nitrogen and brought back to room temperature and dehydrated by a series of acetone transfers (first pre-cooled in -80 °C, then -20 °C, then 4 °C and finally to room temperature). The disc can then be embedded in poly-methyl-acrylate (PMMA) and cut with a sharp blade to produce 100 μm-thick sections. These sections can then be viewed by any standard brightfield microscope but preferentially by usage of fluorescence microscopy since procion red emits a red fluorescence (Figs. 5-6). The trabeculi of the bony surface appear very clean after the jet lavaging step (Fig. 7).

Parameters for a successful organ culture are first of all the absence of contamination, maintained cell viability (Figs. 8-9), disc height and overall "disc integrity", measured with histological sections and safranin O/fast green stain or Meyer's Hematoxilin 3. We developed protocols and macros published elsewhere4,5 to stain live disc tissue and to scan cell viability in 3D using a confocal laser scanning microscope and the live/dead staining kit (Molecular Probes, Invitrogen, Basel, Switzerland). We further developed a macro and routine to perform automated cell counting to estimate cell viability in 3D tissue or 3D carriers using the NIH ImageJ platform4-6. Alternate protocols have been proposed to determine cell viability of disc cells by initial digestion using sequential digestion of the extracellular matrix using pronase and collagenase type 2 and then to stain the cell suspension7. An earlier version of the protocol involved an incubation step in PBS containing ten times more concentrated penicillin/streptomycin concentration for 10min after the harvesting of the discs prior organ culture. With the jet lavage step this step becomes obsolete since this step seems beneficial for culturing purposes. 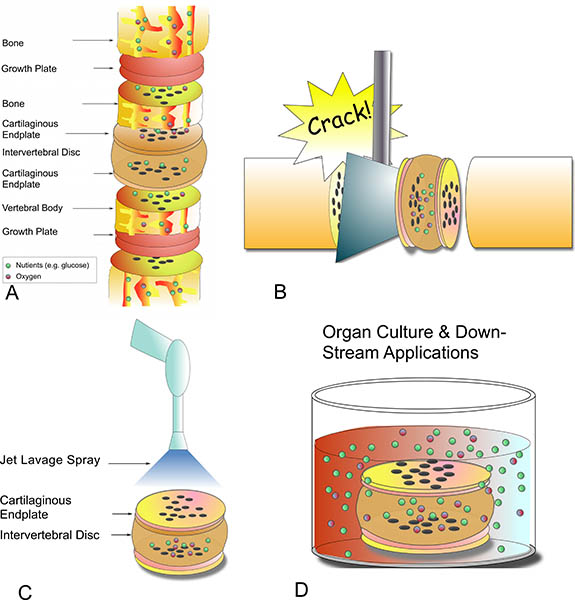 Figure 1. Overview of the methodological steps to prepare bovine coccygeal Intervertebral Discs with intact endplates and a thin layer (1-2mm) of bone. A) Schematic view of the intervertebral disc (IVD) and its nutritional pathways. B) Procedure to cut out the IVD with a customized blade-holder and an industrial sharp blade. C) Jet lavage step to ensure high cell viability and to enable nutrient exchange keeping the endplates and 1-2 mm of bone attached on both sides. D) Finally the IVD can be cultured in the specimen chamber of a bioreactor or be used for any down-stream application. 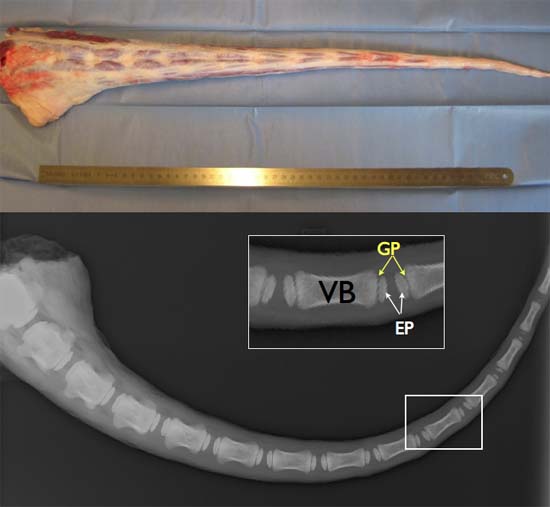 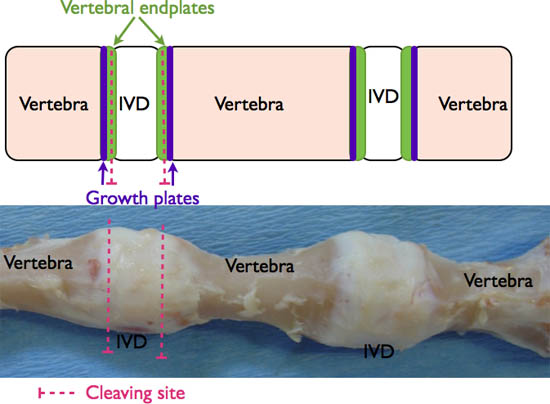 Figure 4. Drawing and picture of the bovine tail after removing the surrounding muscle and ligament illustrating the cleaving sites to cut out the motional segments. Partial vertebra should be "cracked" with the custom-made blade holder ideally 1-2 mm away from the cartilaginous endplates to ensure full bone surface. 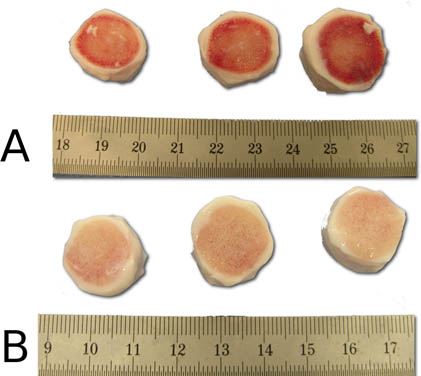 Figure 5. Demonstration of the effective cleaning of the jet-lavage step before (A) and after (B). Notice the clean bony surfaces of the intervertebral disc segments after the spraying procedure. 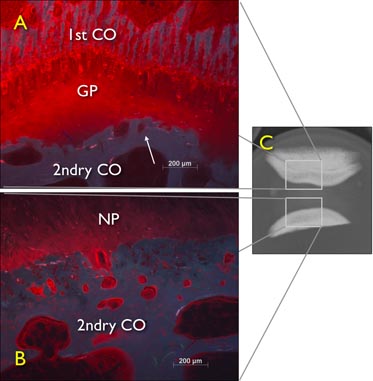 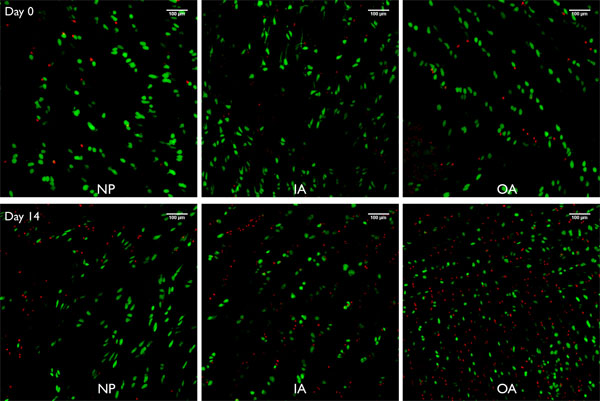 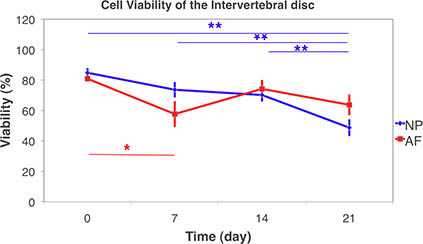 The first step for successful organ culture is to make sure that the explant should not be contaminated. The tail should be skinned before you start with the procedure. Any animal hair brought into a sterile lab could be problematic in terms of contamination. The bovine tail should ideally be as fresh as possible (this affects initial cell viability). Furthermore, the betadine washing step is recommended to reduce the risk of contamination further. Instead of using a custom-made blade holder and a hammer to separate the IVD from the vertebra body, this could be performed by using a histological bandsaw (the diamond blade should be cooled with PBS or Ringer solution while cutting). Beware that the bandsaw, the sample holder and the cutting blade should be sterile. The technique demonstrated here is not limited to bovine tail IVD isolation but can be extended to other animal species such as porcine, ovine and leporine caudal or even lumbar IVD isolation. For IVD harvest in the region where spinal processes are present, it is important to remove all the processes first.

As an alternate protocol, the bovine discs can be prepared by removing all of the adjacent bone of the vertebrae by using a dental burr and just leaving the cartilaginous endplates11. IVD cell viability was maintained over 4 weeks by using this method. However, in this case torsion cannot be applied in a straightforward way to the motional segments since there is no stiff bone available to "grab" the disc. The concave endplates instead of a parallel surfaces on both sides also needs an adjustment of the specimen chamber in any bioreactor design to account for the loading profile differences11. Moreover, the evaluation of diffusion of molecules across bony endplates is also not possibly in these explants.

Significance of our work