Human cells do not indefinitely proliferate. Upon external and/or intrinsic cues, cells might die or enter a stable cell cycle arrest called senescence. Several cellular mechanisms, such as telomere shortening and abnormal expression of mitogenic oncogenes, have been shown to cause senescence. Senescence is not restricted to normal cells; cancer cells have also been reported to senesce.

To this end, the standard β-galactosidase assay, the currently used method, presents major drawbacks: it is time consuming and not sensitive. We propose here a flow cytometry-based assay to study senescence on live cells. This assay offers the advantage of being rapid, sensitive, and can be coupled to the immunolabeling of various cellular markers.

Since early sixties and its discovery by Hayflick and Moorhead, senescence still remains a cellular curiosity 1. Human cells do not indefinitely proliferate and, by senescence, Hayflick and Moorhead coined the cellular process of ageing. Senescence is a stable cell cycle arrest in which cells remain metabolically active as opposed to cellular death. To date, four cellular mechanisms have been shown to induce senescence: telomere shortening, DNA damage, chromatin perturbation, and abnormal expression of mitogenic oncogenes 2. This indicates that not only normal cells but also cancer cells are able to undergo senescence 3. As a matter of fact, cancer cells undergoing senescence were shown to constitute a barrier to further tumor progression 4-5. However, several reports have now pointed out that, under certain circumstances, cellular senescence can also promote malignancy 6-7. Studying senescence of cancer cells is about to become an urge in cancer research as currently used chemotherapeutic drugs can lead to senescence of cancer cells not only in vitro but also in vivo 8.

1. Preparation of C12FDG, Bafilomycin A1, and Cell Culture

Multiple Myeloma, a hematological malignancy, was used to evaluate the senescence induced by a chemotherapeutical procedure. To do so a commercially available MM cell line (RPMI 8226) was treated for 2 days with doxorubicin, a chemotherapeutical drug. The cells were then subjected to bafilomycin A1 treatment and further incubated with C12FDG. Cells were analyzed by flow cytometry. Figure 1 illustrates the different steps and shows that the percentage of senescent cells can be determined within a day with the use of C12FDG. Unlabeled cells were run first in the flow cytometer. As shown in Figure 2A, a region of interest was set on the graphic FSC versus SSC to exclude dead cells and cellular debris. Cells in this region of interest were then gated on the histogram displaying the fluorescence of C12FDG (FL1) on the x-axis and the number of events on the y-axis. The untreated cells were analyzed. A red cursor was set after the dimly labeled population as depicted Figure 2B: non senescent cells will appear in the region U, whereas senescent cells will be present in region V. The treated cells were thereafter run in the flow cytometer. A population of brightly labeled cells appeared above the red cursor previously set, in the region V, as shown Figure 2C (left panel). This population represents senescent cells and their percentage can subsequently be calculated. In parallel, the same cell sample was stained using the β-galactosidase assay as illustrated (right panel). In this representative picture, entirely blue cells and partially blue cells are shown to illustrate the difficulty to discriminate truly blue senescent cells. 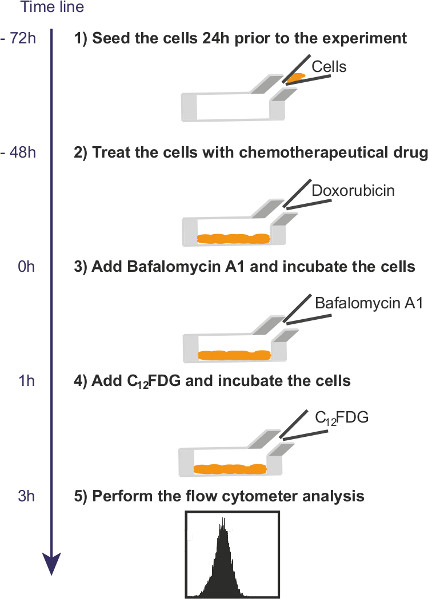 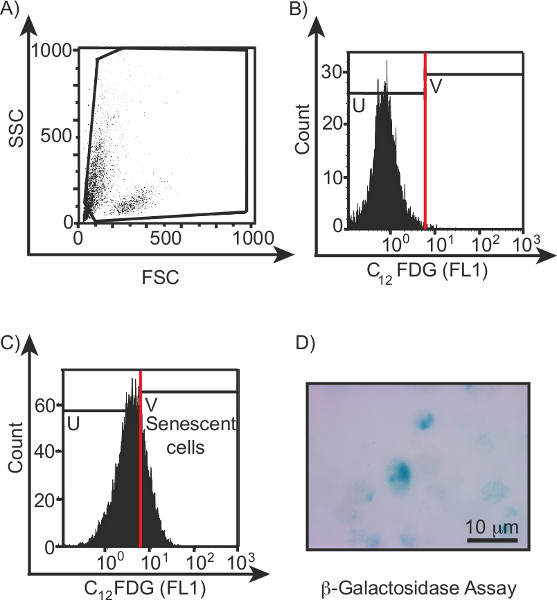 Figure 2. Flow cytometry analysis. (A) A region of interest was determined on the plot FSC versus SSC to exclude dead cells and cellular debris. (B) The untreated cells were run in the flow cytometer and the red cursor was set. (C) The treated cells were run in the flow cytometer. The senescent cells appeared above the red cursor. U and V represent the regions of interest, i.e. non senescent and senescent cells, respectively. (D) In parallel (same sample, same treatment), the cells were stained using the β-galactosidase assay. Note the various degree of the staining of the cells (entirely blue cells, partially blue cells), which illustrates the difficulty to set a threshold allowing the discrimination of senescent cells. Forward Scatter Channel (FSC), Side Scatter Channel (SSC), Fluorescence 1 (FL1). 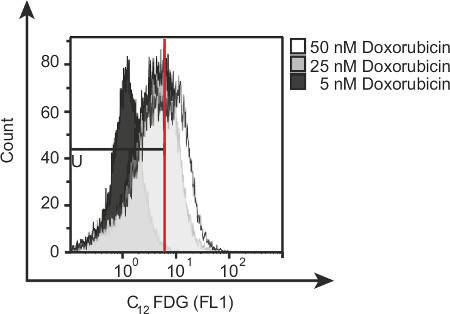 Table 1. Advantages and disadvantages of the C12FDG cytometry based assay and the β-galactosidase assay. (+) corresponds to higher degree while (-) and (=) correspond to minor and equivalent degrees, respectively.

We presented here a flow cytometry-based method to quantify cellular senescence in live cancer cells. This method is based on the use of the membrane permeable compound, the C12FDG, and can therefore be used in any cell types and after various treatments as long as the compound is taken up by the cells. Upon cellular uptake, the C12FDG is hydrolyzed by the β-galactosidase, enriched in lysosomes of senescent cells. After laser excitation, the compound emits green fluorescence, allowing for quantification of senescent cells. This quantification of the green fluorescence can either be done by flow cytometry or by fluorescence microscopy. However, in this case, fluorescent cells will have to be counted by the observer, requiring time. Since the C12FDG is hydrolyzed by the β-galactosidase, this method allows, in addition to the quantification of senescent cells, to quantify the activity of the β-galactosidase and the localization of the enzyme, mostly present in lysosomal vesicle. Although the method is simple, attention should be drawn on step 3. The successful detection of senescent cells mostly relies on the right pH of the lysosomes. To do so, we used bafilomycin A1 to neutralize the acidic pH of lysosomes. Depending on the cell type used, this step might not be required. If senescence is expected and no staining is detected, we suggest to include a negative control for bafilomycin A1 (no bafilomycin) and to increase the concentration of bafilomycin A1. If doing so, ensure that this increase does not induce cell death. Alternatively, bafilomycin A1 can be substituted with chloroquine or any other compounds that are able to increase the pH of lysosomes.

Using the described protocol, we successfully quantified the percentage of senescent cells in multiple myeloma cells following doxorubicin treatment within a day. This protocol can be used in other cancer cell types, but also in non-cancer cell types. The popular and overused β-galactosidase assay, for which the cellular pH must also be controlled, requires at least 2 days. Indeed the maximal blue color, obtained after the cleavage of X-gal by the β-galactosidase, is achieved after 12 - 16 hr of incubation 9. This assay is therefore more time consuming than the proposed cytometry based assay. Moreover, this assay is not sensitive because a bluish cell might be counted as senescent cell while being not truly senescent. The Table 1 recapitulates the advantages and disadvantages to the two techniques.

Senescence has been shown to be pro-and anti-tumorigenic. Since chemotherapeutical drugs can induce senescence, studying senescence might become important in clinic. To this end, fast and sensitive assays have to be used, such as the assay we described here.

We thank the SF 4206 ICORE (Université de Caen) for the use of the cytometry facility. J.C. received post-doctoral fellowships from Conseil de Radioprotection d'EDF and Conseil Régional of Basse-Normandie. Those data were part of projects funded by the Ligue Nationale contre le Cancer - Comités de l'Orne et du Calvados.