Unraveling how physiology and morphology are linked allows a deeper understanding of mechanistic functioning of plant leaves. We present both a procedure to derive parameters of stomatal regulation from stomatal conductance measurements and correlations with traditional functional leaf traits.

Leaf functional traits are important because they reflect physiological functions, such as transpiration and carbon assimilation. In particular, morphological leaf traits have the potential to summarize plants strategies in terms of water use efficiency, growth pattern and nutrient use. The leaf economics spectrum (LES) is a recognized framework in functional plant ecology and reflects a gradient of increasing specific leaf area (SLA), leaf nitrogen, phosphorus and cation content, and decreasing leaf dry matter content (LDMC) and carbon nitrogen ratio (CN). The LES describes different strategies ranging from that of short-lived leaves with high photosynthetic capacity per leaf mass to long-lived leaves with low mass-based carbon assimilation rates. However, traits that are not included in the LES might provide additional information on the species' physiology, such as those related to stomatal control. Protocols are presented for a wide range of leaf functional traits, including traits of the LES, but also traits that are independent of the LES. In particular, a new method is introduced that relates the plants’ regulatory behavior in stomatal conductance to vapor pressure deficit. The resulting parameters of stomatal regulation can then be compared to the LES and other plant functional traits. The results show that functional leaf traits of the LES were also valid predictors for the parameters of stomatal regulation. For example, leaf carbon concentration was positively related to the vapor pressure deficit (vpd) at the point of inflection and the maximum of the conductance-vpd curve. However, traits that are not included in the LES added information in explaining parameters of stomatal control: the vpd at the point of inflection of the conductance-vpd curve was lower for species with higher stomatal density and higher stomatal index. Overall, stomata and vein traits were more powerful predictors for explaining stomatal regulation than traits used in the LES.

To advance the functional understanding of plant leaves, many recent studies have attempted to relate morphological, anatomical and chemical leaf traits to physiological responses, such as leaf stomatal conductance (gS) 1-4. In addition, to leaf traits, stomatal conductance is strongly affected by environmental conditions, such as photosynthetically active photon flux density, air temperature and vpd 5. Various ways have been proposed to model gs - vpd curves6-8 which are mainly based on linear regression of gs on vpd 6. In contrast, the model presented in this study regresses the logits of relative stomatal conductance (i.e., the ratio of gS to maximum stomatal conductance gSMAX) on vpd and accounts for the non-linearity by adding vpd as a quadratic regressor term.

Compared to other models, the new model allows for deriving parameters that describe the vpd at which gS is down-regulated under water shortage. Similarly, the vpd is obtained at which gS is maximal. As such physiological parameters can be expected to be tightly linked to carbon assimilation 9,10 a close link between these model parameters and the key leaf traits to nutrient and resource allocation as reflected in the LES should be expected 3,11. In consequence, there should be also a tight relationship between strategies of stomatal regulation with LES traits. Such a relationship is expected in particular for leaf habit (evergreen versus deciduous) as leaf habit is both correlated with the LES and with water use efficiency12,13. Evergreen species tend to grow slower, but are more efficient in environments poor in nutrients 14. Thus, leaf habit should translate into differing stomatal regulation patterns, with a more conservative water use strategy than deciduous species. 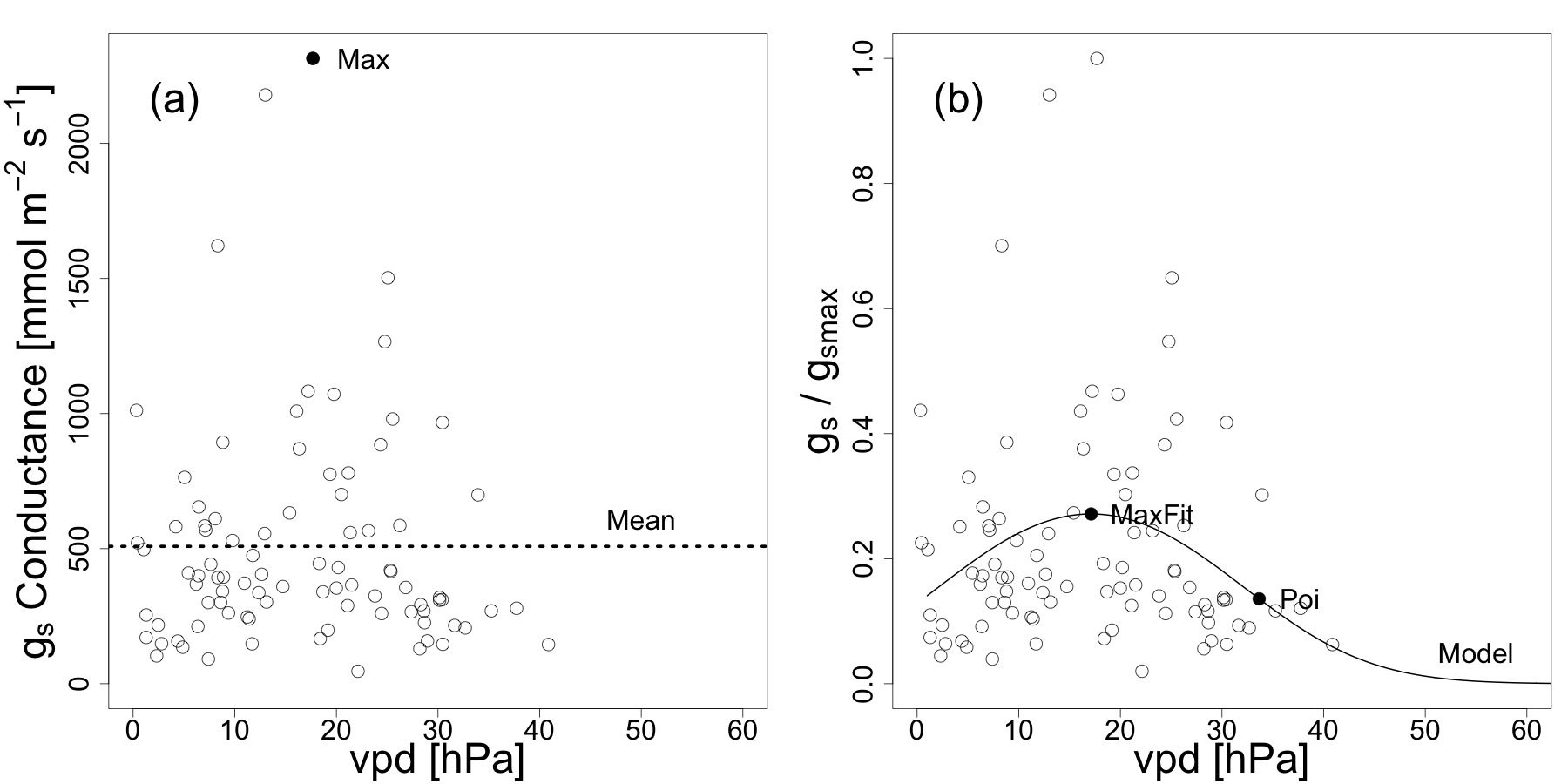 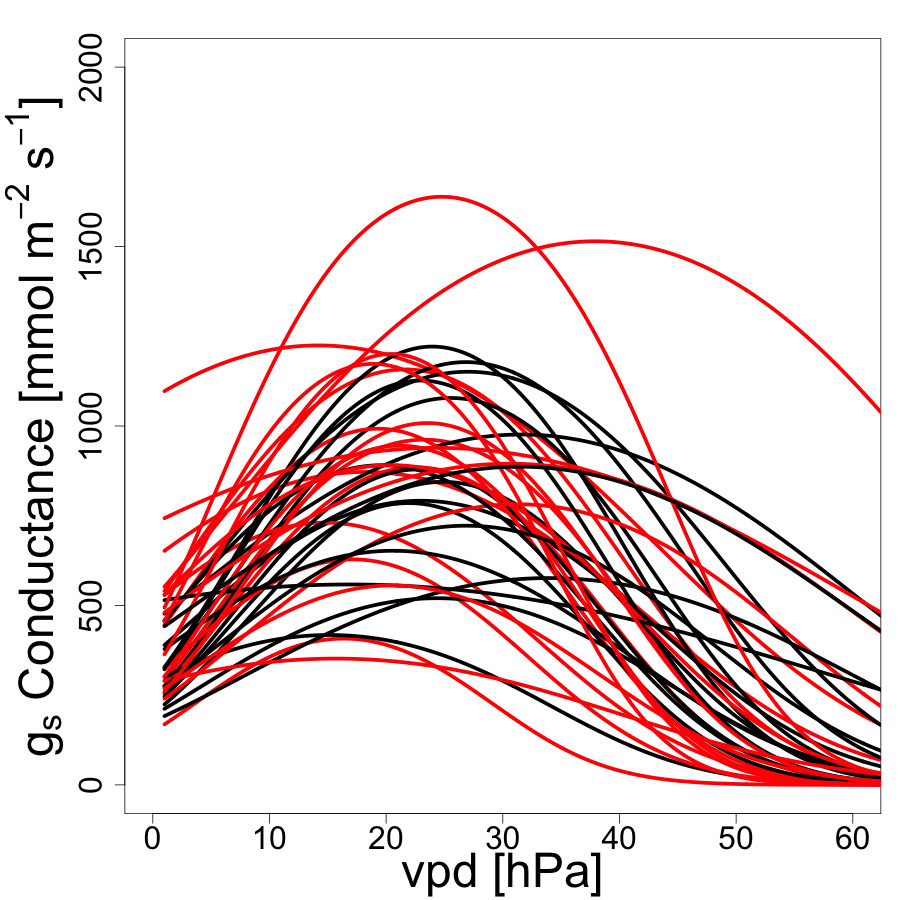 Figure 2. All fitted models for all species. Model graphs for the stomatal conductance data to vpd regression for all species. Evergreen species are represented by black lines, deciduous species by red lines 20. Re-print with permission from20.

NOTE: Using the logits instead of regressing gS directly to vpd, leads to the point that modeled maximum values do not exceed gSMAX and that gS approaches 0 at high vpd.

NOTE: For the assessment of leaf vein traits, a modified a protocol from Sack & Scoffoni 17 was employed.

4. Assessment of Other Leaf Traits

Many parameters of stomatal conductance and stomatal regulation were found to be related to morphological, anatomical and chemical leaf traits. In the following, the focus will be on the links to vpd at the point of inflection, which decreased with stomatal density (p=0.04) and stomatal index (p=0.03) and increased with leaf carbon content (p=0.02, See Figure 3). The results show that with decreasing vpd at the point of inflection there was a decrease in stomatal density and stomatal index. In contrast, no parameter of stomatal conductance showed a clear relationship to leaf habit. The high variation within the two groups of leaf habit shows that different regulatory mechanisms exist both within the group of evergreen and deciduous leaf habits.

Figure 3. Result figure for the links between patterns of stomatal conductance regulation and leaf traits. Vapor pressure deficit (vpd) at the point of inflection of the gS - vpd curve (VpdPoi) as a function of (A) stomata density, (B) stomata index, and (C) leaf carbon content 20. Re-print with permission from20. Please click here to view a larger version of this figure.

The parameters of stomatal regulation extracted by the method presented in this paper underline the importance of stomatal traits, such as stomata density and stomata index. These novel relationships demonstrate the potential of linking parameters from physiological models to morphological, anatomical and chemical leaf traits 20. Compared to other methods, the present approach bears the advantage of capturing a unique and unequivocal vpd value at which stomatal conductance is down-regulated to half of the modeled gs maximum.

Our results partly confirm the first hypothesis of a link between stomatal conductance parameters and leaf traits of the leaf economics spectrum (LES), which corresponds to several other studies. For example, Poorter and Bongers (2006)24 reported a close link between gS and traits represented by the LES, e.g., with gS decreasing with increasing leaf lifespan. Accordingly, Schulze et al. (1994) 1 demonstrated clear links between leaf nitrogen content and gSMAX. Similarly, Juhrbandt et al. (2004) 25 found significant relationships between gSMAX and leaf area and leaf nitrogen content.

Our second hypothesis of clear differences with regard to leaf habit could not be confirmed. The high variation in the measured parameters and traits within evergreen and deciduous leaf habit indicate that leaf habit is not a good descriptor of the LES. Brodribb and Holbrook (2005) 26 discussed that leaf habit and leaf physiological strategies may not be inevitably connected since broad trait variation is common in all types of leaf habit.

The approach may be extended to traits and physiological characteristics of plant organs other than leaves, for example to traits related to xylem hydraulics such as specific xylem hydraulic conductivity and microscopy wood traits 27. Similarly, other types of leaf traits as derived from microscopy such as palisade parenchyma structure and epicuticular wax layer structure could be included 28.

In summary, this study confirmed the close connection between the LES and stomatal regulation. In addition, the method presented here revealed facets of stomatal regulation patterns that are not related to the LES. Especially specific leaf traits such as stomata size, density and index as well as vein length deserve future attention in functional plant studies.

We are indebted to Xuefei Yang, Sabine Both, Lin Chen and Kaitian Wang for coordinating the fieldwork and establishing the BEF-China experiment. We are also grateful to the whole BEF-China research group for their general support. BEF-China is mainly funded by the German Research Foundation (DFG FOR 891/1 and 2) and funding for this particular project was provided by the German Research Foundation to H.B. (DFG BR 1698/9-2). We are also thankful for the travel grants and summer schools financed by the Sino-German Centre for Research Promotion in Beijing (GZ 524, 592, 698, 699 and 785). In addition we would like to thank David Eichenberg, Michael Staab, Katja Grotius, Silvana Tornack, Lin Chen, and Shouren Zhang for their support in the field and in the lab.