Here, we present an ex vivo flow model in which murine cardiac valves can be cultured allowing the study of the biology of the valve.

Heart valve disease is a major burden in the Western world and no effective treatment is available. This is mainly due to a lack of knowledge of the molecular, cellular and mechanical mechanisms underlying the maintenance and/or loss of the valvular structure.

Current models used to study valvular biology include in vitro cultures of valvular endothelial and interstitial cells. Although, in vitro culturing models provide both cellular and molecular mechanisms, the mechanisms involved in the 3D-organization of the valve remain unclear. While in vivo models have provided insight into the molecular mechanisms underlying valvular development, insight into adult valvular biology is still elusive.

Heart valve disease is a major cause of morbidity and mortality in the Western world; its prevalence increases with age and it affects more than 10% of the population 75 years and older1. The valves of the systemic part of the heart, the aortic and mitral valves, are mostly affected. Heart valve disease is characterized by the loss of the highly organized structure of the valves, which results in the alteration of the mechanical properties2. The structural integrity is therefore critical for the function of the valve.

The leaflets of the valve are comprised of valvular interstitial cells (VIC), valvular endothelial cells (VEC), and extracellular matrix, which is highly organized in an layered pattern3,4. The VICs are responsible for the ECM synthesis, degradation and organization. Factors emanating from the bloodstream, ECs or residing in the ECM act on the VICs orchestrating its function. In addition, mechanical forces act on the leaflet during the cardiac cycle resulting in laminar or oscillatory shear stress, compressive or tensile stresses influencing the behavior of VICs5.

In order to understand how the structure of the valve is regulated, it must first be understood how VICs respond to the diverse set of stimuli experienced during the cardiac cycle. In vitro studies have been very informative about the characteristics and abilities of the valvular cells. The response of these cells in vitro, however, may not always accurately mimic the in vivo response6; for example, the response of VIC to stimuli is dependent on the presence of ECs and the ECM composition5. Furthermore, the response of the valvular cells to stimuli depends on their specific location in the leaflet7. In addition to biochemical stimuli, the behavior of the valvular cells is determined by mechanical forces acting on the valve8. Each region of the valve is subjected to its own specific set of hemodynamic stresses. Although current ex vivo models have shown that mechanical forces are important determinants of valvular structure5, the associated mechanisms are still unclear. While in vivo models have provided insight into the molecular mechanisms underlying valvular development9,10, insights into adult valvular biology is still elusive.

Therefore, an ex vivo flow model was developed in which the cardiac valves can be cultured in their natural position in the heart for an extended period of time11. This has the advantage that the valves remain in their natural configuration and the VICs experience the same environment as in vivo, making the VICs responses to stimuli as natural as possible. In addition, the culture of the valves in their natural position in the heart facilitates subjecting each valvular region to the relevant hemodynamic stresses. In this ex vivo model, i.e., the Miniature Tissue Culture System (MTCS), the valves can be subjected to different biochemical and hemodynamic stimuli allowing the investigation of their role in cardiac valve remodeling.

This protocol follows the LUMC guidelines of the animal research ethics committee.

Note: Perform all preparations in the laminar flow hood. The MTCS perfusion chamber, bubble trap and stand are described in Lieber et al., 201011.

3. Cannulation of the Mouse Hearts in the Perfusion Chamber

The aortic valve (Figure 2) or mitral valve11 can be cultured for at least 3 days. By culturing in the open position (which represents the systolic position for the aortic valve and the diastolic position for the mitral valve), valvular cells remain viable. No cell death is observed as determined by the absence of TUNEL-positive cells (Figure 2H,I) or cleaved caspase-3 expression (not shown and Lieber et al., 201011). The collagen distribution (as visualized by Masson’s Trichrome staining) is similar to the native condition when cultured in 1% serum (Figure 2D,E). The valves are responsive to changing culture conditions. Increasing the amount of serum to 10% results in thicker leaflets (Figure 2C). Furthermore, a clear collagen-free region is observed at the ventricular side of the leaflet near the attachment to the aortic wall (arrow in Figure 2F). Together these observations show that the cultured valves remain viable, resemble their native counterparts and are responsive to environmental changes. 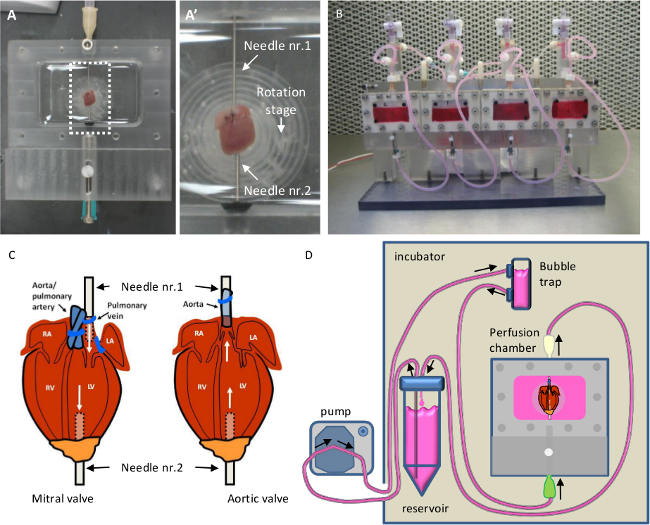 Figure 1. The Miniature Tissue Culture system. (A) In the perfusion chamber the heart is laying on the rotation stage and ligated with the blunted needles indicated with nr.1 and nr.2. (B) Perfusion chamber is mounted on the stand. (C) Schematic drawing of the heart when culturing the mitral valve (left) or aortic valve (right). (D) Schematic drawing of the setup of the ex vivo flow system for aortic valve culture. This figure has been partly modified from previous study11. Please click here to view a larger version of this figure. 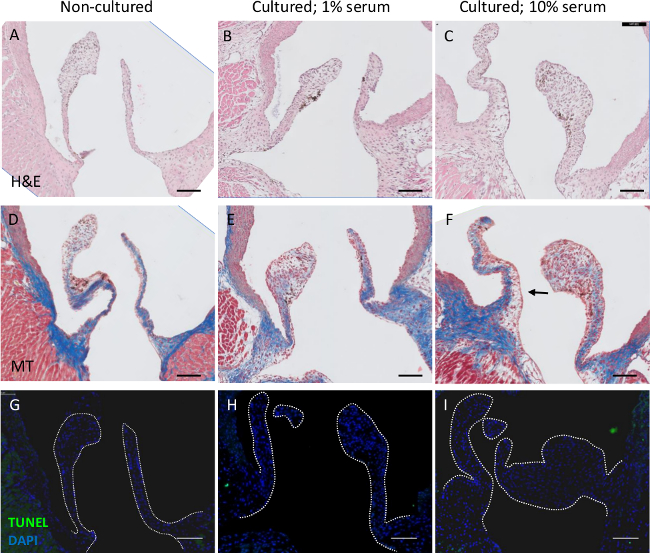 Figure 2. Histological analysis of cultured valves from 2 months old mice. (A-C) heamatoxylin and eosin (H&E) (D-F) Masson’s Trichrome staining and G-I) TUNEL staining of a non-cultured aortic valve (A,D,G), an aortic valve cultured in the presence of 1% serum (B,E,H) or 10% serum (C,F,I) for 3 days in the MTCS. The valve cultured with 1% serum appears similar to the non-cultured valve, whereas the valve cultured with 10% serum is thicker (C) and has an altered ECM pattern (F). No apoptosis is observed in the valves (G-I). Scale bar is 100 um. Please click here to view a larger version of this figure.

Critical steps in culturing the cardiac mouse valves include making the time between excision of the heart from the mouse and the ligation in the perfusion chamber as short as possible to ensure viability and ligation of the needles perpendicular to the valves to ensure proper direction of the flow. Additionally, checking the flow after ligation in the perfusion chamber without medium ensures proper insertion and ligation of needles. It is critical to maintain a sterile culture and prevent air bubbles in the tubing, which could potentially get trapped in the heart obstructing the flow.

The total volume of medium used for the perfusion of a heart is 45 ml (note that the medium that is perfused through the heart is not in contact with the 20 ml of medium in the perfusion chamber). For the addition of for example viruses a smaller volume can be preferred. Temporally the reservoir (and part of the tubing) can be removed from the circuit leaving 5-7 ml in the system to allow infection of the valve.

The absence of beating of the heart could be considered a limitation. However, it allows creating an experimental condition in which all stimuli working on the leaflet can be kept constant. This gives the unique opportunity to study the effect of one single modification. When moving valves are required, a pulsatile flow can be created.

To study the valvular biology and the role of molecular, cellular and mechanical stimuli on the valve, modifications can be easily made to the culture system. Molecular modification can be achieved by the addition of growth factors, chemical compounds and viruses mediating gene delivery11 to the perfusion medium. One or multiple cell types can be administered to the perfusion medium to examine the influence of these cells on valvular biology or their contribution to the valve. The influence of oxidative stress or hypoxia can be studied by altering the oxygen-pressure in the culture medium. The hemodynamic stresses on the valve can be varied by changing the flow speed, flow direction, flow pulsatility and the viscosity. The overall morphology can be examined (Figure 2B,C) by H&E, histochemical and immunofluorescent staining. Additionally the organization and composition of the ECM, the phenotype, proliferation, and viability of the valvular cells and the activation of signaling pathways provide insight into the effects of varying these conditions. Genetically modified mice can be used to track the endothelial cells, using endothelial reporter mice (using the Tie2-Cre and floxed reporter mice) indicating the presence of endothelial-to-mesenchymal transformation or mice with loss or gain of function of specific signaling pathways. Overall, the system presented here is a useful tool for studying cardiac valvular biology.

This study is supported by the Dutch Heart Foundation and the Netherlands Institute for Regenerative Medicine.