The administration of drugs for recovery of kidney function requires control of the localization and distribution of the therapeutic compound. Here, we describe in detail a simple technique for intrarenal delivery of drugs in rats. This procedure may be easily performed with no mortality and high reproducibility.

The renal microvascular compartment plays an important role in the progression of kidney disease and hypertension, leading to the development of End Stage Renal Disease with high risk of death for cardiovascular events. Moreover, recent clinical studies have shown that renovascular structure and function may have a great impact on functional renal recovery after surgery. Here, we describe a protocol for the delivery of drugs into the renal artery of rats. This procedure offers significant advantages over the frequently used systemic administration as it may allow a more localized therapeutic effect. In addition, the use of rodents in pharmacodynamic analysis of preclinical studies may be cost effective, paving the way for the design of translational experiments in larger animal models. Using this technique, infusion of rat recombinant Vascular Endothelial Growth Factor (VEGF) protein in rats has induced activation of VEGF signaling as shown by increased expression of FLK1, pAKT/AKT, pERK/ERK. In summary, we established a protocol for the intrarenal delivery of drugs in rats, which is simple and highly reproducible.

The renal microvasculature is involved in a wide spectrum of kidney diseases. Depending on the pathophysiology of disease, the endothelial cells may present structural or functional impairment, which may play a pivotal role in propagating kidney damage by creating an ischemic microenvironment. This renal microvascular dysfunction may catalyze the onset of a progressive deterioration of renal function over time, leading to chronic kidney disease (CKD), end-stage renal disease, hypertension and cardiorenal syndrome. In fact, untreated hypertension may have implications in renal arterioles, causing nephrosclerosis or glomerulosclerosis with significant reduction in vascular volume fraction, increase in vascular resistance and development of tubulointerstitial fibrosis1.

Loss of renal microvasculature may be due to altered vascular homeostasis induced by local angiogenic/anti-angiogenic factors imbalance. This correlates with attenuated Vascular Endothelial Growth Factor (VEGF) signaling as well as elevated thrombospondin-12-4. Thus, using different animal models (mice, rats and pigs), the therapeutic effect of exogenous administration of VEGF has been recently investigated in some forms of renal disease, showing reduced interstitial fibrosis and stabilized renal and cardiac function3-5. This effect is likely due to actions of VEGF on endothelial cells of the microvascular bed and inflammatory monocyte phenotype switching6.

For some preclinical studies, the use of rodents, the most commonly used laboratory animals, provides a good animal model for high throughput studies due to relatively low costs and ease of handling. Moreover, the use of genetically-altered rats as models of human diseases, such as hypertension, has become more and more frequent in the scientific community. Therefore, the aim of this protocol is to describe a useful intrarenal VEGF delivery technique in rats that is easy to perform and highly reproducible. Moreover, the same method can be used to selectively deliver other drugs.

The experiments were performed on female Sprague-Dawley rats, weighing 250-300 g. All animal procedures complied with the standards stated in the Guide for the Care and Use of Laboratory Animals (Institute of Laboratory Animal Resources, National Academy of Sciences, Bethesda, MD, USA) and were approved by the Mayo Clinic College of Medicine Institutional Animal Care and Use Committee (IACUC).

We injected two different doses of recombinant rat VEGF (rrVEGF, 0.17 μg/kg and 5 μg/kg) or PBS. The animals were euthanized 8 hr post-surgery to examine the activation of the VEGF pathway. The surgical procedure did not affect the morphology of the perfused kidney (Figure 1A) when compared to control (Figure 1B), as shown by H&E staining. While Sirius red staining did not show any increase in extracellular matrix deposition in response to the ischemic time and the infusion of the rrVEGF (Figure 1C) when compared to control (Figure 1D). By Western Blot analysis, we observed a small but significant increase in the expression of proteins involved in the VEGF pathway, such as VEGF, FLK1, pAKT/AKT, pERK/ERK (Figure 2). 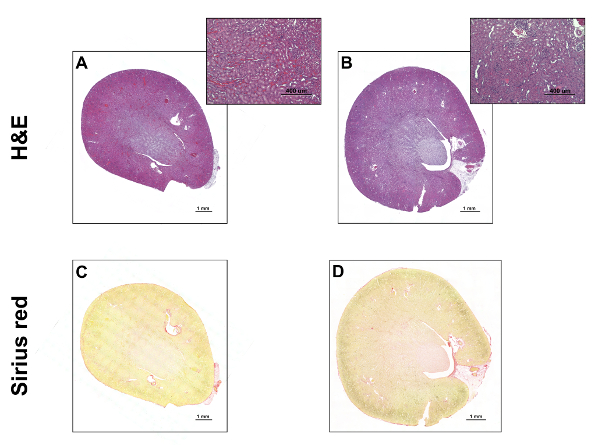 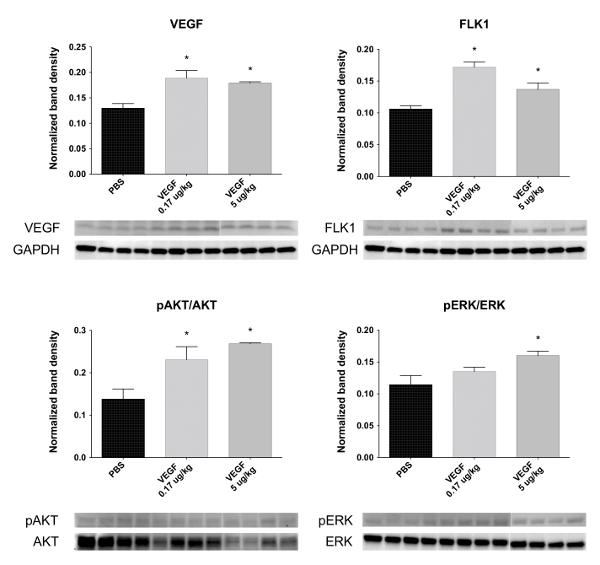 Figure 2: Activation of VEGF Pathway. Western Blot analysis of VEGF, FLK1, phosphoAKT/AKT and phosphoERK/ERK showing the upregulation of VEGF pathway after rrVEGF infusion in the kidney (n = 4). Data are presented as mean ± SEM. *p <0.05 vs. PBS. Please click here to view a larger version of this figure.

The increasing incidence of chronic kidney disease raises the need for novel therapeutic approaches that can promote functional kidney recovery7,8. Traditional therapies include the systemic administration of anti-inflammatory, anti-fibrotic drugs9. However, these strategies are frequently characterized by unwanted side effects due to off-target distribution of the injected drug. Therefore, in this manuscript, we describe a simple procedure for delivering drugs into the renal artery of rats. This protocol will be useful for testing drugs in rodent models of hypertension, renal artery stenosis or any disease that simulate clinical renovascular diseases. However, in preclinical studies, the use of small animal models, though convenient and sometimes beneficial, may bear several disadvantages that need to be taken into consideration. Importantly, the small size of the organs in rodents requires a higher degree of surgical skills, which may be achieved with some practice. Thus, following previously tested critical steps of a surgical technique, may facilitate and aid the learning process.

A pivotal aspect of the procedure described is the dissection of the renal artery from the renal vein and the surrounding adipose/connective tissue. The use of cotton swabs helps avoid damage to nerves and lymphatic and/or blood vessels, in particular to the thin-walled veins. Another important and delicate step is the cannulation of the renal artery: because of the very small diameter of the vessel, the catheter might puncture through the artery. For this reason, working under a surgical microscope and finding a good angle for the insertion of the catheter is fundamental: the needle should be as much as possible parallel to the renal artery. At the same time, the observation of a distinct, slow color change in the kidney, caused by the infusion of the drug suspension, is essential to be certain that the catheter has been positioned correctly.

One of the most important issues that might affect the outcome of this surgical procedure is the duration of the ischemia. A prolonged and complete restriction of blood supply to the kidney may cause serious damage to the renal tissue, characterized by increase of reactive oxygen species (ROS) levels and activation of fibrogenic mechanisms and inflammatory mediators within the renal parenchyma10-12. Thus, it is crucial to minimize the time of ischemia in an effort to prevent irreversible interstitial fibrosis as well as cell death. Selective necrosis of the immediate postglomerular portion of a tubular segment sensitive to inhibition of mitochondrial respiration has been previously described after only 15 min of ischemia in rats13. Therefore, we recommend that the total renal ischemia should not exceed 7 min in duration.

Finally, for an optimal recovery, it is very important to keep the animal very well hydrated and warm for the entire duration of the surgery and immediately post op, as laparotomy procedures may result in body fluids loss as well as hypothermia, both of which may increase post op mortality.

In this manuscript, we are showing results obtained from healthy rats to demonstrate the feasibility and the safety of the surgical procedure. We believe that a greater up-regulation of the VEGF pathway would be observed in a disease model. Furthermore, it is important to highlight that, although with the described method biologics can be delivered directly into the renal artery, other organs might be affected via venous outflow and subsequent systemic circulation. However, clamping the vein soon after the infusion for about 5 min, should minimize any potential systemic side effect. In conclusion, the protocol described is safe, and useful for large scale drug testing in rat preclinical studies where high throughput is required before translation to more clinically relevant animal models.

This work is partly supported by a research grant from Astra Zeneca.