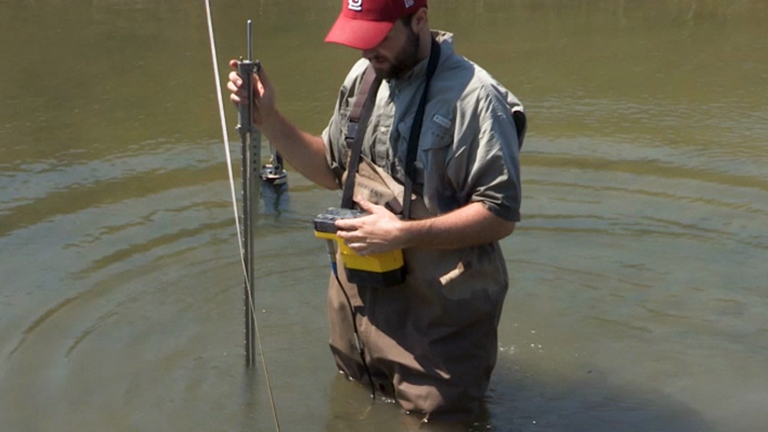 This article summarizes the design attributes and the effectiveness of treatment systems that treat urban stormwater and agriculture irrigation runoff to remove pesticides and other contaminants associated with aquatic toxicity.

Urban stormwater and agriculture irrigation runoff contain a complex mixture of contaminants that are often toxic to adjacent receiving waters. Runoff may be treated with simple systems designed to promote sorption of contaminants to vegetation and soils and promote infiltration. Two example systems are described: a bioswale treatment system for urban stormwater treatment, and a vegetated drainage ditch for treating agriculture irrigation runoff. Both have similar attributes that reduce contaminant loading in runoff: vegetation that results in sorption of the contaminants to the soil and plant surfaces, and water infiltration. These systems may also include the integration of granulated activated carbon as a polishing step to remove residual contaminants. Implementation of these systems in agriculture and urban watersheds requires system monitoring to verify treatment efficacy. This includes chemical monitoring for specific contaminants responsible for toxicity. The current paper emphasizes monitoring of current use pesticides since these are responsible for surface water toxicity to aquatic invertebrates.

Surface water toxicity is prevalent in California watersheds and decades of monitoring have shown that toxicity is often due to pesticides and other contaminants1. The primary sources of surface water contamination are stormwater and irrigation runoff from urban and agriculture sources. As waterbodies are listed as degraded due to contaminants and the toxicity is identified from urban and agricultural sources, water quality regulators partner with state and federal funding sources to implement practices to reduce contaminant loading. Green infrastructure is being promoted in California urban watersheds to reduce flooding and increase the recovery of stormwater through infiltration and storage. While Low Impact Development (LID) designs are being mandated for new construction in many regions, few studies have monitored the efficacy of these systems beyond measurements of conventional contaminants like dissolved solids, metals, and hydrocarbons. More intensive monitoring has recently evaluated reductions in chemical concentrations and chemical loading responsible for surface water toxicity, and to directly determine whether bioswales reduce toxicity of runoff. This has shown that bioswales are effective at removing toxicity associated with some contaminant classes2, but additional research is required for emerging chemicals of concern.

Vegetated treatment systems are also being implemented in agriculture watersheds in California, and these have been shown to be effective at reducing pesticides and other contaminants in agriculture irrigation runoff3,4. These systems represent components of a suite of approaches to reduce contaminant loading to surface waters. Because they are intended to mitigate contaminants responsible for surface water toxicity, a key component of the implementation process is monitoring to ensure their long-term effectiveness. Monitoring includes both chemical analyses of chemicals of concern, as well as toxicity testing with sensitive indicator species. This article describes protocols and monitoring results for an urban parking lot bioswale and an agricultural vegetated drainage ditch system.

The design attributes of a typical parking lot bioswale, such as may be used to treat storm runoff in a typical mixed-use urban shopping parking area depend on the area being treated. In the example described here, 53,286 square feet of asphalt create an impervious surface area that drains to a swale, which consists of 4,683 square feet of landscaping. To accommodate runoff from this surface area, a 215 feet long flat-bottom, semi-V shape channel comprises the swale with a side slope less than 50% and a longitudinal slope of 1% (Figure 1). This swale comprises three layers including native bunch grass planted in 6 inches of topsoil, layered over 2.5 feet of compacted subgrade. Stormwater flows from parking areas to multiple entry points along the swale. The water infiltrates the vegetated area, then permeates the subgrade and drains into a 4-inch perforated drain. This system drains water through a system plumbed to an adjacent wetland that eventually drains into a local creek.

Efficacy of the integrated vegetated ditch system to treat chlorpyrifos varied depending on the flow rate, but TSS and chlorpyrifos in spiked irrigation water were significantly reduced at both flow rates. The average TSS reduction in the three trials conducted at 3.2 L/s and 6.3 L/s was 79.7% and 82.3%, respectively. Chlorpyrifos was reduced from about 750 ng/L to less than detection (<50 ng/L) in two of the low flow-rate trials, and to an estimated concentration of 78 ng/L in the third trial (below reporting limit). Chlorpyrifos was reduced from an average of 707 ng/L to less than 100 ng/L in all three trials at the higher flow rate. When combined with infiltration, average load reductions were 98% and 94% for the low and high flow rates, respectively (Table 2).

Figure 1: Image of a parking lot bioswale. Inlet (untreated) stormwater samples were collected from several of the curb openings to the bioswale. Outlet (treated) stormwater samples were collected from a drainage pipe located inside an overflow grate located at the top of the image (not shown). Please click here to view a larger version of this figure.

Figure 2: Schematic diagram of integrated vegetated ditch system (152 m length, not to scale). Entire ditch was vegetated with red fescue grass. Compost and GAC installations were placed as shown. Please click here to view a larger version of this figure.

Table 1: Toxicity and chemistry of bioswale inlet and outlet monitored during one storm. TSS = total suspended solids; ND = not detected.

The practices described in this protocol are intended as final steps in an overall strategy to remove pollutants in agriculture irrigation and stormwater runoff. Use of bioswales and other urban green-infrastructure LID practices are intended as a final piece of the puzzle to remove contaminants in runoff before they reach adjacent receiving waters. This protocol emphasizes methods to monitor urban bioswales to determine treatment efficacy for removing toxicity associated with urban contaminants, with emphasis on current use pesticides.

Critical steps in designing monitoring studies include modeling approaches and sampling designs to capture storm hydrographs, appropriate analyte lists with adequate detection limits, and use of toxicity indicators and endpoints appropriate for urban contaminants known to cause surface water toxicity.

For example, removal of degradates of the phenylpyrazole pesticide fipronil were inconsistent, likely due to its moderate solubility2,13. Modifications of current bioswale designs might be required to address specific contaminants not completely removed by bioswales and other LID practices. For example, use of highly soluble neonicotinoid pesticides is increasing, and these do not readily sorb to plant sources14. Treatment of more soluble pesticides may require additional steps, such as filtering using GAC4.

Studies have also shown that removal efficiencies vary depending on the target contaminant, and that more soluble pesticides are more difficult to remove3. Since the goal is to reduce pesticides to non-toxic concentrations before they enter receiving waters, additional treatment has been required to serve as "polishing" steps. These include use of treatment enzymes3,4,17, and more recently, use of GAC.

Systems that incorporate GAC will likely be more effective4, and recent experiments have demonstrated that the neonicotinoid imidacloprid was completely removed by GAC at field flow rates and concentrations (Voorhees et al., in press21). Practical considerations for growers interested in incorporating GAC into integrated vegetated treatment systems will be ease of use, GAC life-expectancy, and procurement and disposal costs. For example, current procurement and disposal costs for GAC are approximately three dollars per pound. These are the subjects of on-going research. As in the example presented here, the effectiveness of GAC in the field can be extended by incorporating GAC-filled treatment sleeves at the end of vegetated systems, after the sedimentation and vegetated ditch sections have removed the majority of suspended particles and contaminants4. Cost considerations for installation and maintenance of all components of integrated vegetated treatment systems for agriculture and bioswales for urban runoff will require more detailed techno-economic feasibility studies18.

As pesticide use patterns evolve with regulation of older classes such as organophosphates for urban use and increased use of newer classes, such as pyrethroids, phenylpyrazoles (e.g., fipronil) and neonicotinoids (e.g., imidacloprid), it will be important to use test species sensitive to the most commonly used pesticides. The two species used in the urban bioswale example described in this paper are among the most sensitive species to current-use pesticides. The amphipod H. azteca is highly sensitive to pyrethroid pesticides19 and some organophosphates, and C. dilutus is among the most sensitive species to fipronil and its degradates, and to neonicotinoids20.

Given the variable performance of vegetated systems for treating these classes of pesticides, it is important to incorporate appropriate toxicity tests for post-treatment monitoring of urban and agricultural waste water to ensure they are protecting receiving waters.