We demonstrate a method of conformally coating conjugated polymers on arbitrary substrates using a custom-designed, low-pressure reaction chamber. Conductive polymers, poly(3,4-ethylenedioxythiophene) (PEDOT) and poly(3,4-propylenedioxythiophene) (PProDOT), and a semiconducting polymer, poly(thieno[3,2-b]thiophene) (PTT), were deposited on unconventional highly-disordered and textured substrates with high surface areas, such as paper, towels and fabrics. This reported deposition chamber is an improvement of previous vapor reactors because our system can accommodate both volatile and nonvolatile monomers, such as 3,4-propylenedioxythiophene and thieno[3,2-b]thiophene. Utilization of both solid and liquid oxidants are also demonstrated. One limitation of this method is that it lacks sophisticated in situ thickness monitors. Polymer coatings made by the commonly used solution-based coating methods, such as spin-coating and surface grafting, are often not uniform or susceptible to mechanical degradation. This reported vapor phase deposition method overcomes those drawbacks and is a strong alternative to common solution-based coating methods. Notably, polymer films coated by the reported method are uniform and conformal on rough surfaces, even at a micrometer scale. This feature allows for future application of vapor deposited polymers in electronics devices on flexible and highly textured substrates.

Polymeric conducting and semiconducting materials have unique properties, such as flexibility1, stretchability2, transparency3, and low density,4 which provide extraordinary opportunities for creating next-generation electronic devices on nontraditional substrates. Currently, many researchers are endeavoring to take advantage of the unique properties of polymeric materials to create flexible and/or wearable electronics5,6 and smart textiles7. However, the ability to conformally coat highly textured surfaces and non-robust substrates, such as paper, fabrics and threads/yarns, remains unmastered. Most commonly, polymers are synthesized and coated on surfaces using solution methods.8,9,10,11,12 Although solution methods provide polymer coated fibers/textiles, the coatings thus obtained are often non-uniform and easily damaged by small physical stresses13,14 . Solution methods are also not applicable to coating paper because of wetting problems.

Reactive vapor deposition can create conformal conjugated polymer films on a diverse range of substrates, irrespective of surface chemistry/composition, surface energy and surface roughness/topography15. In this approach, conjugated polymers are synthesized in the vapor phase by simultaneously delivering monomer and oxidant vapors to a surface. Polymerization and film formation occurs on the surface in a single, solvent-free step. This method is theoretically applicable to any conjugated polymer that can be synthesized by oxidative polymerization using solution methods. However, to date, protocols for depositing only a narrow set of conjugated polymer structures are known.15

Here, we demonstrate the deposition of conductive poly(3,4-ethylenedioxythiophene) (PEDOT) and poly(3,4-propylenedioxythiophene) (PProDOT), and semiconducting poly(thieno[3,2-b]thiophene) (PTT) films via reactive vapor deposition. Two kinds of oxidants, solid FeCl3 and liquid Br2, are used in the process. The corresponding polymers are named Cl-PProDOT, Cl-PTT, and Br-PEDOT. Both conventional substrates, glass slides, and unconventional textured substrates, such as paper, towels and fabrics, were coated with the polymer films.

This protocol describes the setup of the custom-built vapor deposition chamber and the details of the deposition process. It is intended to help new practitioners to build their deposition system and avoid common pitfalls associated with vapor-phase synthesis.

Read MSDS for reagents and follow all chemical safety measures as required by your institution.

The thickness of Cl-PProDOT films formed on 1.3 cm x 2.5 cm glass slides placed at discrete lateral positions along the central tube were measured by a profilometer (Figure 3). Conductivities were calculated from resistivity measurements using a home-built four-point probe test station. The measured conductivity of a 100-nm thick Cl-PProDOT film on glass slides is 106 S/cm, which is sufficient to qualify this film as a potential electrode material. Figure 4 is the AFM image of 100-nm PProDOT film on a glass slide. X-ray photoelectron spectroscopy (XPS) spectra of Cl-PProDOT films on glass slides before and after rinsing were collected to prove that all residual FeCl3 was removed and prove that the conductivity arises solely from the polymer (Figure 5).

The UV/Vis absorption spectra of Cl-PProDOT, Cl-PTT and Br-PEDOT are shown in Figure 6. Polymers isolated immediately after deposition are p-doped because of the presence of excess oxidant. Accordingly, these films are colored blue due to polaronic and bipolaronic absorption bands in the red/NIR region. The broad, featureless absorption bands beyond 600 nm, the characteristic of bipolaron and polaron polarons, remain unchanged in the Cl-PProDOT and Br-PEDOT films before and after rinsing, which indicates that Cl-PProDOT and Br-PEDOT remain p-doped after rinsing. In contrast, Cl-PTT shows no polaron or bipolaron peaks after rinsing, indicating that Cl-PTT is fully de-doped during the rinsing process.

Optical micrographs and scanning electron microscopy (SEM) images of paper, corduroy fabric and a cotton towel before and after coating with Cl-PTT are shown in Figure 7. After coating, the pristine white substrates become dark red, indicating the presence of Cl-PTT coatings. All the three substrates are highly textured and disordered and have high surface area. The SEM images show that the films are uniform and conformal on the surface at a micrometer scale on all the three substrates. 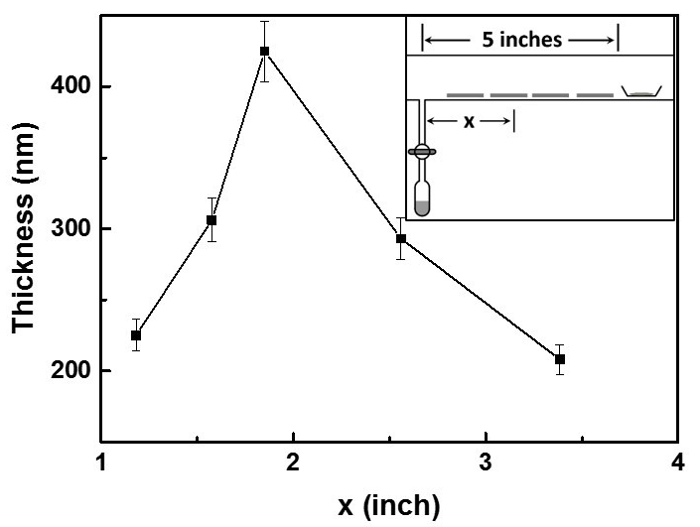 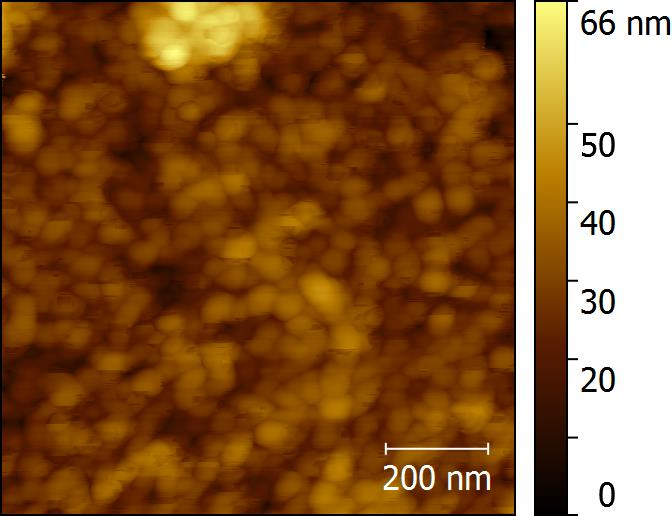 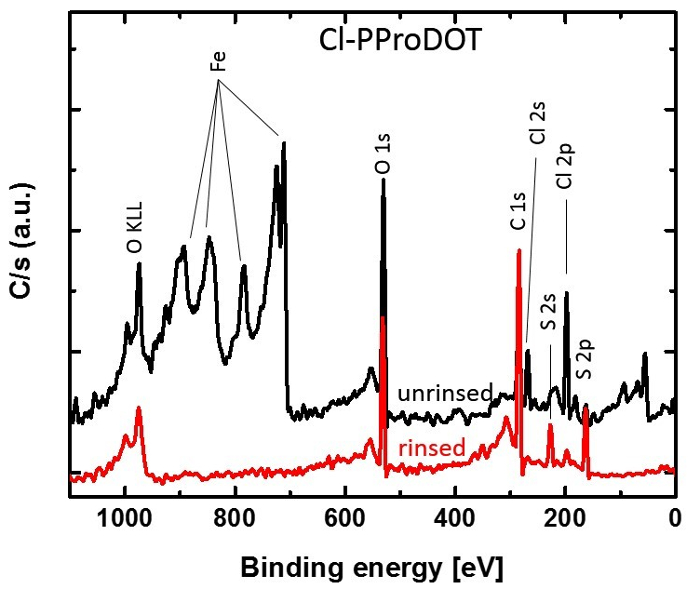 Figure 5. Elemental analysis. XPS spectra of a 1.3 cm x 2.5 cm glass slide coated with a 100-nm thick film of Cl-PProDOT immediately after deposition (black line) and after rinsing (red line) with methanol. The spectra reveal that iron salts are removed after rinsing. 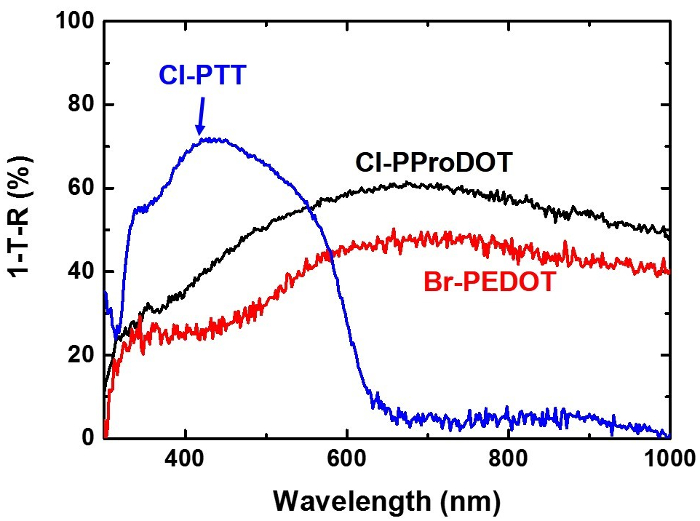 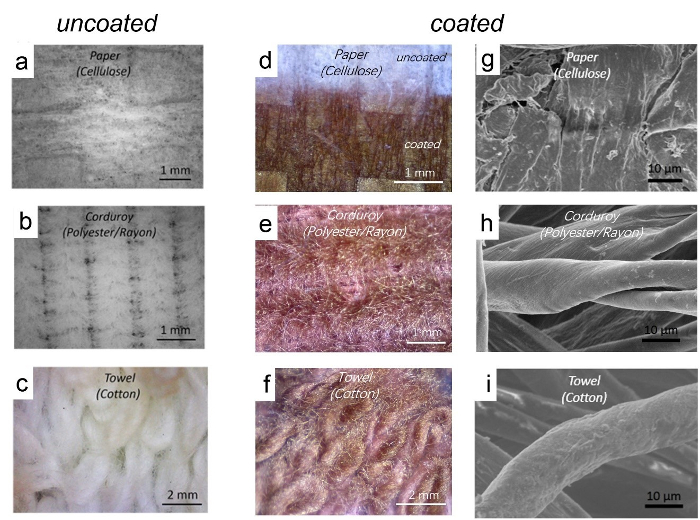 We only present three examples of polymers in this protocol. For the coating of other polymers, the reaction conditions need to be optimized. The temperature of the oxidant can be kept the same as the protocol if the same oxidant is used. It has been reported that the process pressure affects the chain lengths of the polymers. Low process pressures result in a short conjugation21. The temperature of the oxidant should be optimized for each new monomer as well. A typical value to start with is the oxidant's melting point. Optimal substrate temperature usually increases as monomer temperature increases. For polymer films thinner than 500 nm, rinsing with copious methanol is enough for complete removal of all the residual oxidant and monomer. For thicker films, to completely remove residual FeCl3, the films can be immersed in a 1 M HCl water solution overnight and then rinsed with methanol.

A drawback of the reported deposition chamber is that it lacks an in situ QCM (quartz crystal microbalance) sensor and therefore, the deposition rates and film thickness cannot be monitored during the deposition. Film thickness is not uniform in the entire substrate region because of the lateral direction of mass transport. The lateral polymer film thickness profile for the vapor polymerization of Cl-PProDOT is shown in Figure 3. The polymer film formed in the middle between the monomer source and the oxidant source is the thickest, and the thickness progressively decreases from the middle to the two lateral directions. This confirms the lateral direction of mass transport from the two vapor sources to the middle of the substrate region and reveals that thickness can be controlled not only by reaction time but also by substrate position.

Since this method can deposit conducting and semiconducting polymers on arbitrary substrates, it can be applied in next-generation electronics on unconventional substrates such as wearable devices22,23. For example, conductive PEDOT or PProDOT can be coated on textiles on a large scale to make conductive textiles and they can be used in wearable electronics24. Also, vapor-deposited conjugated polymers can also be used as electrodes or active layers in electronics on paper to achieve light weight and low cost while solution-based coating methods are not applicable for paper substrates25.