The goal of this article is to present a method that allows a 3-dimensional reconstruction of the cerebrovascular tree in mice after micro computed tomography and determination of volumes of entire vessel segments that can be used to quantify cerebral vasospasm in murine models of subarachnoid hemorrhage.

Subarachnoid hemorrhage (SAH) is a subtype of hemorrhagic stroke. Cerebral vasospasm that occurs in the aftermath of the bleeding is an important factor determining patient outcome and is therefore frequently taken as a study endpoint. However, in small animal studies on SAH, quantification of cerebral vasospasm is a major challenge. Here, an ex vivo method is presented that allows quantification of volumes of entire vessel segments, which can be used as an objective measure to quantify cerebral vasospasm. In a first step, endovascular casting of the cerebral vasculature is performed using a radiopaque casting agent. Then, cross-sectional imaging data are acquired by micro computed tomography. The final step involves 3-dimensional reconstruction of the virtual vascular tree, followed by an algorithm to calculate center lines and volumes of the selected vessel segments. The method resulted in a highly accurate virtual reconstruction of the cerebrovascular tree shown by a diameter-based comparison of anatomical samples with their virtual reconstructions. Compared with vessel diameters alone, the vessel volumes highlight the differences between vasospastic and non-vasospastic vessels shown in a series of SAH and sham-operated mice.

Aneurysmatic subarachnoid hemorrhage (SAH), a subtype of hemorrhagic stroke, is a common disease in neurointensive care units. Besides early brain injury (EBI), which comprises cerebral damage caused by the bleeding event itself, another important factor determining patient outcome is delayed cerebral ischemia (DCI), defined by clinical deterioration through impaired cerebral perfusion or cerebral infarction not associated with interventional or surgical procedures1,2,3. Important mechanisms contributing to DCI are vasospasms of large cerebral vessels on the one hand; on the other hand, microcirculatory dysfunction with vasospasm of microvessels and microthrombosis, and ischemia related to cortical spreading depressions play a role (reviewed in Madonald 20141). Therefore, diagnosis of vasospasm of the large cerebral vessels is crucial in clinical practice and displays an important endpoint in many clinical and experimental studies.

Despite the fact that the features of vasospasm in murine SAH models are not directly transferable to the human patient, murine models of SAH related vasospasm have been of growing significance in the last years. In these models SAH is induced by endovascular filament perforation4,5,6,7,8, transection of cisternal vessels9, or injection of blood into the CSF10,11,12. In contrast to large animal models of SAH which were traditionally designed to study vasospasm13, murine models have the great advantage that numerous transgenic mice strains are available. This makes them an excellent tool for studying molecular mechanisms leading to vasospasm and DCI. However, determination of cerebral vasospasm in mice is challenging. This is because in contrast to large animal models in which vasospasm can be examined using clinical imaging techniques, in vivo imaging to analyze cerebral vasospasm in mice is not yet available. Therefore, vasospasm is commonly determined using either histological sections10,11 or microscopically after casting of cerebral vessels7,9,12. However, these techniques have the disadvantage that vessel diameters are examined at defined points only.

Based on a previous study7, this manuscript presents a method for objective and reproducible analysis of vasospasm in a murine SAH model. The method is based on perfusion and casting of the cerebral vessels, ex vivo micro-CT scanning, digital reconstruction of the vessel tree, and subsequent evaluation of volumes of entire cerebral vessels.

The animal experiments were approved by the responsible animal care committee (Landesuntersuchungsamt Rheinland-Pfalz) and carried out in accordance with the German Animal Welfare Act (TierSchG). All applicable international, national, and institutional guidelines for the care and use of animals were followed.

3. 3-dimensional Reconstruction of the Intracranial Vascular Tree and Determination of Vessel Volumes

Note: Background information on the functions of the visualization software can be found using the function help.

The 3-dimensionally reconstructed intracranial vascular trees provided a highly accurate vascular anatomy (Figure 1). To assess the accuracy, we performed a diameter-based comparison between vessel diameters determined microscopically and from the 3-dimensional virtual reconstructions at 2 anatomically defined points (1: left middle cerebral artery (MCA) 1 mm distal of the carotid T; 2: right MCA 1 mm distal of the carotid T). For microscopic determination of vessel diameters, a high-resolution camera (Infinity X-21, Deltapix) with DeltaPix Insight software version 2.0.1 calibrated to a micrometer scale was used. For this evaluation, 10 brain samples (5 SAH, 5 sham) were analyzed. These were from a series of 12 mice, in 7 of which an SAH was induced, while 5 underwent sham surgery (2 animals of the SAH group died on postoperative days 1 and 2, respectively). There were no significant differences between the diameters determined microscopically and virtually, indicating an accurate virtual reconstruction of the intracranial vascular anatomy (microscopic determination vs. virtual reconstruction, mean ± standard error: left MCA 150 ± 9 µm vs. left MCA 150 ± 8 µm; right MCA 153 ± 8 µm vs.154 ± 9 µm, see Figure 2).

Quantification of cerebral vasospasm in mice with SAH

Figure 1. Virtual reconstruction of the intracranial vascular tree. (A) shows a representative brain sample; (B) shows the corresponding virtually reconstructed vascular tree. (C) Color-coded visualization of the diameter of the left MCA. Please click here to view a larger version of this figure. 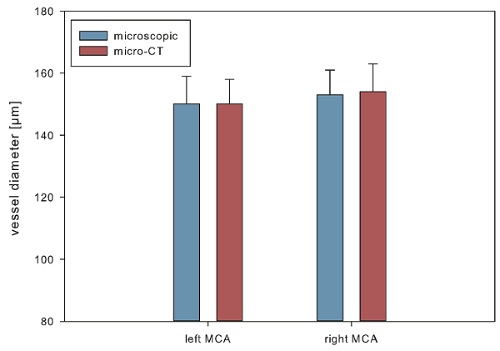 Figure 2. Accuracy of the digital reconstruction of the vasculature. Mean diameters measured from 3D reconstructed brain samples compared with those determined microscopically. Data are shown as mean ± standard error of the mean. Please click here to view a larger version of this figure.

Murine SAH models are an important tool for basic SAH research. Cerebral vasospasm is frequently used as an endpoint in experimental studies investigating the mechanisms leading to DCI after SAH9,11. However, quantification of cerebral vasospasm in mice or other small animal models of SAH is challenging. Commonly, vasospasm is quantified by ex vivo determination of vessel diameters at defined anatomical points after endovascular perfusion and casting7,9,12 or by determination of the circumference of defined vessels on histological sections10,11. However, these methods have some disadvantages: Vasospasm is evaluated only at defined anatomical points; vasospasm of neighboring vessel segments may escape evaluation. Histological artifacts present another source of errors. Furthermore, the evaluation can be rather subjective, because the exact position where the vessel diameter is measured is determined by the investigator.

The goal was therefore to establish a method that quantifies cerebral vasospasm by calculating the vessel volume of entire cerebral vessel segments from cross-sectional imaging data7. The most important advantage of the volumetric method presented here is that entire vessel segments can be examined. This avoids the need of definition of a point where the vessel diameter is measured. A further advantage of the evaluation of whole vessel segments is that it presumably presents a more objective parameter to quantify vasospasm than determination of vessel diameters at defined points where vasospasm of the more proximal or distal vessel may escape evaluation. Digital representation of vessel diameters using a color code allows an intuitive estimation of the degree of vasospasm. Furthermore, volumetric evaluation leads to larger differences between vasospastic vessels compared to evaluation of vessel diameters as shown in the representative results. The virtual reconstruction achieved with the method presented here reflects the vascular anatomy accurately. This is shown by the evaluation of the representative series, in which vessel diameters measured microscopically and from the digital reconstructions were similar, reproducing the observations of a previous study7. However, despite its advantages, further studies are needed to evaluate whether or not the method presented here is superior to conventional methods of vasospasm analysis.

A limitation of the method presented here is that it affords more time compared to microscopic analysis of casted brain samples or histological analysis (micro CT scanning time 90 minutes per brain sample, data processing 45 min per brain sample). Furthermore, the availability of micro CT scanners may limit its application. The number of animals examined here was sufficient to demonstrate the feasibility of the protocol described in this manuscript. However, if the protocol should be used in treatment studies, animal numbers would have to be calculated based on the expected effects on vessel volumes and diameters. Another limitation of this and other studies using murine SAH models is that vasospasm is determined ex vivo. This makes longitudinal studies impossible that investigate baseline values before SAH induction and vasospasm at different time points. Although studies have demonstrated that it is possible to depict the anatomy of the large intracranial vessels of mice in vivo using magnetic resonance tomography18, computed tomography angiography19, or digital subtraction angiography20, these methods, to our knowledge, have not yet been used to analyze cerebral vasospasm in murine SAH models in vivo. Of note, the digital reconstruction of the cerebral vasculature with subsequent volumetric evaluation of cerebral vasospasm presented here is not limited to the use on ex vivo micro CT data. If high resolution vascular cross sectional brain imaging in mice should become available in the future, it could be used to perform a volumetric analysis of vasospasm in vivo.

Parts of this study are part of the doctoral thesis of T. Pantel, presented to the Medical Faculty of the Johannes Gutenberg-University of Mainz. The study was supported by the Friedhelm Frees Stiftung and by the Stiftung Neurochirurgische Forschung (grants to A.N.).