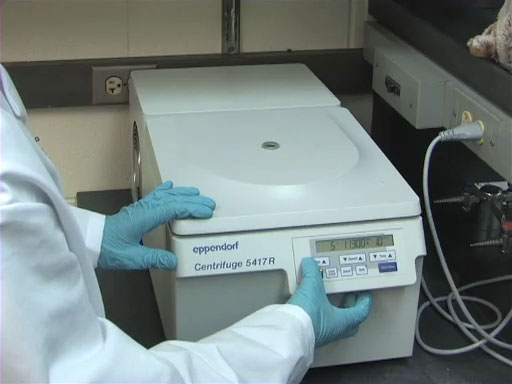 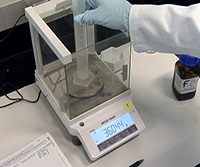 Determining the Density of a Solid and Liquid
Published Today 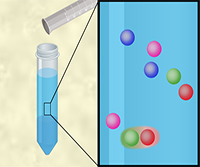 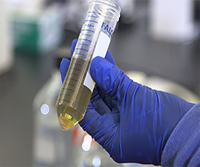 Density gradient ultracentrifugation is a common technique used to isolate and purify biomolecules and cell structures. This technique exploits the fact that, in suspension, particles that are more dense than the solvent will sediment, while those that are less dense will float. A high-speed ultracentrifuge is used to accelerate this process in order to separate biomolecules within a density gradient, which can be established by layering liquids of decreasing density in a centrifuge tube.

The video will cover the principles of density gradient ultracentrifugation, including a procedure that demonstrates sample preparation, creation of a sucrose gradient, ultracentrifugation, and collection of fractionated analytes. The applications section discusses isolation of multi-protein complexes, isolation of nucleic acid complexes, and separation using cesium chloride density gradients.

Let's start by examining the principles of ultracentrifuges and density gradients. A suspension contains particles in a liquid solvent. Because of gravity, particles denser than the solvent sediment out while those less dense than the solvent float. The greater the difference in density between the particle and the solvent, the faster the separation.

An ultracentrifuge contains a unit called a rotor, which rotates at highly controlled speeds, simulating a strong gravitational field. Within this field, the differences in density between particles and the solvent are magnified.

The strength of the field depends on the speed of rotation. Even a small rotor at a relatively low rotational speed can create a force thousands of times stronger than the earth's gravitational field.

If a tube contains several liquids of different densities, centrifugation will keep them in separate layers in order of density, with the densest liquid closest to the base. Such a layering of multiple liquids is called a "density gradient." There are two types. In step gradients, liquids of decreasing density are carefully layered on top one another. In continuous gradients, the liquids are mixed in varying proportions, so the density decreases smoothly from the base upwards.

Cellular organelles can be separated using a step gradient, through "isopycnic density-gradient centrifugation." This is the simplest and most common centrifugation procedure.

This procedure is used to separate the cellular structures. The more dense the organelle, the further it descends-with mitochondria at the top and nucleic acids towards the bottom.

Now that you know the principles behind the technique, let's see it in the lab.

Before the procedure is started, the manufacturer's speed and density ratings should be noted, and the ultracentrifuge checked for corrosion. This procedure uses a swinging-bucket rotor.

First, the cellular material is prepared by homogenizing the cells, which nondestructively releases their organelles. The homogenate may be fractionated through preliminary low-speed centrifugation, to remove low-density components. Next, the sucrose solutions are prepared.

Sucrose is added in increasing amounts so each solution is more concentrated, and therefore denser, than the preceding one. The exact densities of the solutions will depend on the components to be separated, which vary between organisms. The solutions should have densities between those of the components to be separated, with the last solution denser than the densest component of the analyte. Techniques for separating components denser than sucrose, like nucleic acids, are described in the applications.

The sucrose gradient is now created in a clean centrifuge tube. A pipette is used to draw up the most concentrated sucrose solution. With the tube held upright, the pipette tip is placed high against the wall, and the liquid dispensed steadily down. It's important that the working area is kept free of vibrations and other disturbances.

After replacing the tip, the remaining solutions are added in order of decreasing density. They are dispensed carefully to form distinct layers and avoid mixing. Finally, about half a milliliter of the cellular sample is added atop the gradient, and the tube is weighed. This is used to balance the weight distribution, the next step of the process.

Centrifugation should begin as soon as possible. The tube is placed in the rotor, which is then balanced by placing blank solutions of equal weight in opposing slots. The rotor is placed in the ultracentrifuge and the system sealed. The temperature and rotation speed and time are set. Typical values are 4 °C with a force of over 100,000 x g for 16 h.

After centrifugation, the tube is withdrawn from the rotor, taking care to keep it upright and undisturbed. The different cellular components have fractionated into discrete bands between the solution layers. The fractions can be collected with a syringe. Alternately, the bottom of the tube can be punctured with a fine, sterilized needle and the outflow collected in sterile tubes. The cellular components have now been isolated. They can be stored at -80 °C.

Now that we've seen the basic procedure, let's look at some applications.

A typical application is the isolation of multi-protein complexes in plant cells. In this example, complexes responsible for cyclic electron flow are being isolated from the thylakoid, the site of the light reaction in photosynthesis. This procedure uses discrete solutions of 14 to 45% sucrose. Centrifugation occurs over 100,000 x g for 14 h at 4 °C.

Because nucleic acids are denser than sucrose, isopycnic centrifugation cannot separate them from organelles nondestructively.

A different technique, known as "rate-zonal centrifugation" is used. It separates organelles based on their sedimentation rates, which depend not only on their densities, but also on their conformations. A continuous gradient is used to separate the components based on this property.

The procedural steps are similar to those for isopycnic cases. In this example, RNA-ribosome complexes are isolated using a continuous gradient of 5% to 20%, centrifuged at 230,000 x g. Centrifugation is interrupted after a few hours to prevent co-precipitation.

Nucleic acid strands can be separated from each other on the basis of density.

This is because strands rich in guanine and cytosine are denser than those rich in adenine and thiamine. In this case, the gradient cannot be made of sucrose, because sucrose is less dense than nucleic acids. Instead, cesium chloride gradients, typically from 1.65 to 1.75 g/mL are used, as they have sufficient density and a low viscosity.

Here we see plankton DNA being purified using a continuous cesium chloride gradient. Centrifugation occurs at over 1,000,000 x g for 18 h under vacuum.