For many scientific studies requiring a biological and chemical analysis of cell populations the cells must be in a high state of purity. Fluorescence activated cell sorting (FACS) is a superior method in which to obtain pure cell populations.

Experimental and clinical studies often require highly purified cell populations. FACS is a technique of choice to purify cell populations of known phenotype. Other bulk methods of purification include panning, complement depletion and magnetic bead separation. However, FACS has several advantages over other available methods. FACS is the preferred method when very high purity of the desired population is required, when the target cell population expresses a very low level of the identifying marker or when cell populations require separation based on differential marker density. In addition, FACS is the only available purification technique to isolate cells based on internal staining or intracellular protein expression, such as a genetically modified fluorescent protein marker. FACS allows the purification of individual cells based on size, granularity and fluorescence. In order to purify cells of interest, they are first stained with fluorescently-tagged monoclonal antibodies (mAb), which recognize specific surface markers on the desired cell population (1). Negative selection of unstained cells is also possible. FACS purification requires a flow cytometer with sorting capacity and the appropriate software. For FACS, cells in suspension are passed as a stream in droplets with each containing a single cell in front of a laser. The fluorescence detection system detects cells of interest based on predetermined fluorescent parameters of the cells. The instrument applies a charge to the droplet containing a cell of interest and an electrostatic deflection system facilitates collection of the charged droplets into appropriate collection tubes (2). The success of staining and thereby sorting depends largely on the selection of the identifying markers and the choice of mAb. Sorting parameters can be adjusted depending on the requirement of purity and yield. Although FACS requires specialized equipment and personnel training, it is the method of choice for isolation of highly purified cell populations. 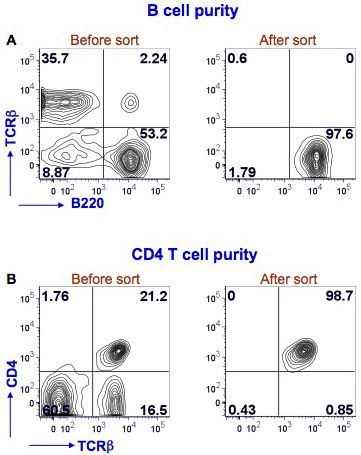 FACS is a highly sophisticated technique for purifying cell populations of interest, in which a very high purity (95-100%) of the sorted population can be obtained. Therefore, this technique is particularly important for experiments, where high purity is an essential requirement (e.g. microarray analysis). FACS is particularly advantageous over other available methods of purification when a cell population needs to be purified based on a weekly expressed surface marker or when two or more populations need to be purified which have different levels of expression of the same surface marker. For example, the purification of marginal zone B cells (B220+CD21hiCD23int/low) and follicular B cells (B220+CD21int/lowCD23hi) based on expression levels of CD21 and CD23. Another growing application of FACS is single cell sorting allowing the analysis of individual cells (3, 4). FACS is also commonly used to sort cells expressing fluorescent proteins that are genetically expressed, such as green fluorescent protein tagged proteins (5). If a sterile sort is performed the cells can be cultured. However, cell viability and yield can be compromised during sorting. Viability can be improved by using a cell-dependent optimal temperature for the sorting and by processing collection tubes immediately after they reach capacity. Recovery can be increased by using polypropylene collection tubes, collecting sorted cells in serum rich media and inverting collection tubes intermittently, maintaining collection tubes at an optimal temperature and centrifuging sorted cells for ~10 min (http://cyto.mednet.ucla.edu/Protocol.htm).

The development of ultra high-speed sorters has extended the possibility of the application of flow sorting in clinical settings. The potential clinical applications of FACS include purification of blood stem cells from human blood for therapeutic purposes, applications in cancer therapy, amniocentesis replacement, sorting human sperm and early disease detections (6, 7).

For multicolor staining, antibody selection is a critical step and fluorochromes are chosen based on the detection system for each particular instrument. There are a number of companies that sell cell sorters and the laser configuration varies according to user needs. Thus one cannot simply use the exact same antibodies used in published studies without confirming compatibility. For optimal antibody selection, one should consider the expression level of the protein being examined. In general, the brightest available fluorochrome-tagged antibodies should be used to stain dimly expressed surface markers, while dim fluorochromes can be used for the staining of highly expressed surface markers (8). In addition, antibodies should be selected in such a way that overlap among their emission spectra is minimal. For multicolor staining, it is extremely difficult to choose fluorochrome that have no spectral overlap. In this situation, compensation is performed.

Compensation is necessary to mathematically eliminate the fluorescence overlap between the emissions spectrum of the various fluorochromes that is measureable by the detectors (8-10). In other words, the overlap fluorescence from one fluorochrome is subtracted from the emissions spectrum of another fluorochrome. The compensation calculation requires an unstained control and single positive controls for each fluorochrome used for a multicolor staining (9, 10). Compensation can be conducted using cells or beads. The beads are easy to stain, have a robust signal and provide an easy way of preparing single stained controls that have the same fluorophores as the experimental samples. Compensation beads are particularly advantageous when the cell surface protein of interest is expressed at a low level and when the cell population of interest is limiting in the initial starting cell population.

Once the antibodies have been chosen, their activity should be optimized by performing a titration analysis. This is particularly important if the FACS machine has highly powerful lasers. The use of suboptimal concentrations of staining antibodies can result in poor separation of the desired cell population from the total cell population. The use of high antibody concentrations increases the chance for antigen non-specific staining. Therefore antibody titration will allow the selection of the antibody concentration that gives the maximum brightness of the positive population and minimal background staining (8).

FACS is now a standard technique for the purification of subpopulations of cells. It can be used to separate any cell type in which a single cell suspension can be generated and antibodies are available to identify the desired cell population. FACS is the method of choice when highly pure cell populations are required.

We would like to thank Dr. Bill Cashdollar for his support in the use of the Flow Cytometry Core. 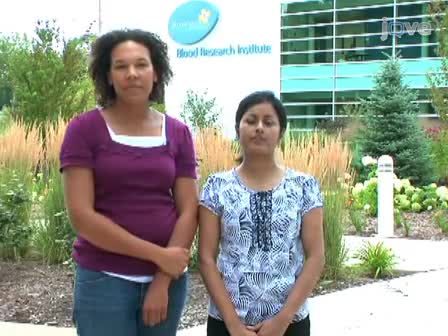