Macromolecular trafficking between plant cells can be assessed by transiently expressing a fluorescently-tagged protein of interest and analyzing its intra- and intercellular distribution by confocal microscopy.

Here, we present a simple and rapid protocol to detect and assess the extent of cell-to-cell macromolecular transport in planta. In this protocol, a fluorescently tagged-protein of interest is transiently expressed in plant tissue following biolistic delivery of its encoding DNA construct. The intra- and intercellular distribution of the tagged protein is then analyzed by confocal microscopy. We describe this technology in detail, providing step-by-step protocols to assay and evaluate the extent of symplastic protein transport in three plant species, Arabidopsis thaliana, Nicotiana benthamiana and N. tabacum (tobacco).

Symplastic transport of macromolecules through plant intercellular connections, the plasmodesmata, is of interest to many plant pathologists and biologists. For example, several viral proteins are known to regulate plasmodesmal size exclusion limits to enable viral movement1-3. Also, some endogenous proteins, among them important developmental regulators, are assumed to move from cell to cell, presumably through plasmodesmata, to function non-cell-autonomously4. Thus, a reliable methodology to identify and visualize macromolecular transport between plant cells is much in demand.

For high transformation efficiency, healthy, robust plants should be used.

Grow one Arabidopsis plant on Pro-Mix BX in a pot (10 cm x 10 cm x 10 cm) in an environment-controlled chamber with a short photoperiod (8 hr of 130-150 μE m-2 s-1 light at 23°C/16 hr dark at 20°C) and 40-65% relative humidity for 6 to 8 weeks5. Fertilize them occasionally with commercially available products as described5. Leaves with the size larger than 15 mm x 35 mm (the length measurement includes petiole) are selected for the experiments.

The protocol for this experimental step has been described in detail previously6. It is very important to use well purified plasmid DNA at high concentrations (~1 μg/μl) to obtain the highest transformation efficiency for the ease of confocal microscopy analysis during the later stages of the experiment.

For this assay, it is important to ascertain that the prepared cartridge does not transform two or more adjacent cells simultaneously at high frequency, because the numbers of cells associating with a fluorescent signal cluster is used as an indicator of the extent of symplastic transport (i.e., a single cell containing the signal indicates no movement, whereas a multicell signal cluster indicates movement). The quality of the each cartridge can be checked by analyzing the expression of the protein 16-20 hours post bombardment. Our protocol6 produces cartridges that yield multicell expression clusters only in <3% of all expression events in this time frame, thus suitable for this experiment.

The fluorescent signal of the transiently expressed tagged proteins is visualized by confocal microscopy. Care should be taken to find optimal microscopy settings for detection of each tested protein. For example, proteins that show limited intracellular accumulation with weak signal intensities, such as the plasmodesmal localization of the Tobacco mosaic virus movement protein (TMV MP)1-3,6, should be observed under a 40X objective lens, which affords higher resolution and sensitivity, whereas proteins that show cytoplasmic distribution with strong signal intensities, such as free YFP, can be visualized under a 10X objective lens with confocal zoom function for faster imaging (see Figure 1).

Symplastic transport is inferred from the appearance of multicell clusters that contain the fluorescent signal. The number of such clusters and number of cells in each cluster is indicative of the extent of cell-to-cell transport. To obtain reliable data, at least 100 expression clusters should be recorded per each experimental system. For example, if the cell-to-cell movement of a protein is compared in two different genetic backgrounds (e.g., wild type and transgenic plants), of a total 200 expression clusters should be recorded. Importantly, experiments, the results of which are to be compared to each other, should be carried out simultaneously.

The figure below illustrates representative experiments for detection of symplastic transport of fluorescently tagged proteins. Panels A and B show the typical confocal images that are obtained following microbombardment of a N. benthamiana leaf with a TMV MP-YFP-expressing construct. In panel A, symplastic movement of TMV MP-YFP is observed based on the appearance of multicell clusters of the YFP signal. Not all transiently expressed TMV MP-YFP is able to move as evidenced by single-cell signal in some microbombardments (panel B). Statistically, in <40% of the counted signal clusters, TMV MP-YFP is unable to move between cells whereas in >60% of the clusters, the protein moves between 2-5 cells, with the two-cell spread being the most frequent (ca. ~50% cases) (Figure 1C).

The proteins with relatively small molecular size without innate movement activity can diffuse through PD to move cell-to-cell. For example, free YFP, or 1xYFP (ca. 27 kDa, panel D), spreads between several cells in 30% of the counted clusters (panels C). This non-specific diffusion does not occur for a translational YFP dimmer, or 2xYFP (54 kDa, panel E), which is comparable in size to TMV MP-YFP fusion protein (57 kDa), and which is completely cell-autonomous (Figure 1C). 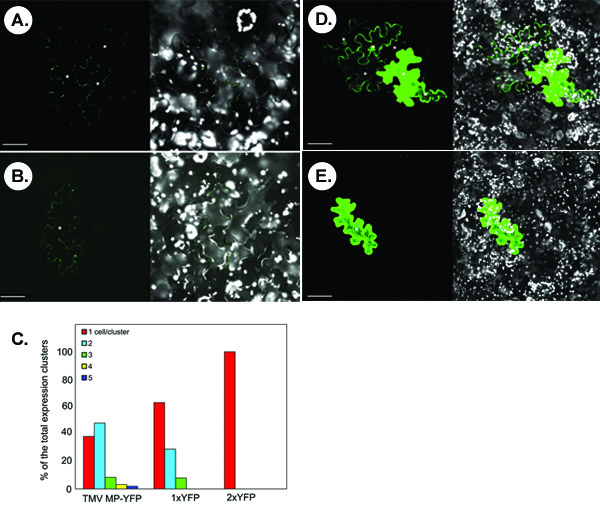 The key for the success of the symplastic transport assay is to obtain high transformation efficiency, which allows production of statistically significant and easily detectible signal clusters. This can be achieved using the leaves harvested from healthy, robust plants, and preparing gold particles coated by a pure and concentrated DNA preparation.

Using the leaves at the same growth stage is also vital for the assay reliability. Plasmodesmal aperture is known to be differentially regulated, depending on the developmental stage of the tissue7-11. Leaves of many plant species develop basipetally, from apex to base, with the apical part of the leaf being more mature than its basal part12. Thus, not only the developmental stage of the leaves (usually reflected by their size and location on the stem) selected for each set of experiments should be identical, but the leaf areas targeted by microbombardment should be located at the identical positions.

Some earlier studies have employed cell-autonomous markers, such as the endoplasmic reticulum-tethered GFP (erGFP)11, to distinguish initially transformed cells from those to which the tested protein has moved by symplastic transport. However, a later study showed that simultaneous expression of some non-cell-autonomous proteins with erGFP could induce its cell-to-cell movement13, questioning the reliability of erGFP as initial transformation markers and substantially increasing the difficulty in interpretation of the data from such coexpression experiments. Thus, we prefer to avoid introducing expression of another protein into our movement assay, and, instead, rely on statistical analysis of signal cluster numbers.

Our work is supported by grants from NIH/NIGMS, NSF, USDA/NIFA, and BARD to VC. 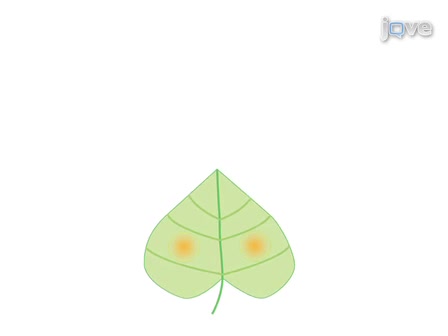