This article intends to describe in stepwise fashion the commonly used in vitro assays used in studying Schwann cell-asrtocyte interactions.

Schwann cells are one of the commonly used cells in repair strategies following spinal cord injuries. Schwann cells are capable of supporting axonal regeneration and sprouting by secreting growth factors 1,2 and providing growth promoting adhesion molecules 3 and extracellular matrix molecules 4. In addition they myelinate the demyelinated axons at the site of injury 5.

However following transplantation, Schwann cells do not migrate from the site of implant and do not intermingle with the host astrocytes 6,7. This results in formation of a sharp boundary between the Schwann cells and astrocytes, creating an obstacle for growing axons trying to exit the graft back into the host tissue proximally and distally. Astrocytes in contact with Schwann cells also undergo hypertrophy and up-regulate the inhibitory molecules 8-13.

In vitro assays have been used to model Schwann cell-astrocyte interactions and have been important in understanding the mechanism underlying the cellular behaviour.

The second assay used in studying the interaction of two cell types is the migration assay where cellular movement can be tracked on the surface of the other cell type monolayer 14,15. This assay is commonly known as inverted coverslip assay. Schwann cells are cultured on small glass fragments and they are inverted face down onto the surface of astrocyte monolayers and migration is assessed from the edge of coverslip.

Both assays have been instrumental in studying the underlying mechanisms involved in the cellular exclusion and boundary formation. Some of the molecules identified using these techniques include N-Cadherins 15, Chondroitin Sulphate proteoglycans(CSPGs) 16,17, FGF/Heparin 18, Eph/Ephrins19.

This article intends to describe boundary assay and migration assay in stepwise fashion and elucidate the possible technical problems that might occur.

Following 8-10 days Schwann-astrocyte co-cultures show a sharp boundary between the two cell types. This boundary is more pronounced if forskolin and BPE is used in the culture as Schwann cell proliferation is enhanced.

If no boundary is observed during the 10 day period, the time of culture can be increased further until the boundaries are established. Changing the ratio of cell density is an alternative way to increase the boundary formation. A ratio of 3:1 Schwann: astrocyte cell density can be used when preparing cell suspensions 8,18.

Following immunostaining to identify the Schwann cells and astrocytes, to assess cell intermingling a line can be drawn where the boundary is established and the number of Schwann cells migrating into the astrocyte territory can be counted under fluorescence microscope.

Below are two examples of images obtained boundaries, one with well-formed segregation of Schwann cells and astrocytes (Figure 1A) and one where the cells have not segregated well into different territories due to poor technique (Figure 1B). 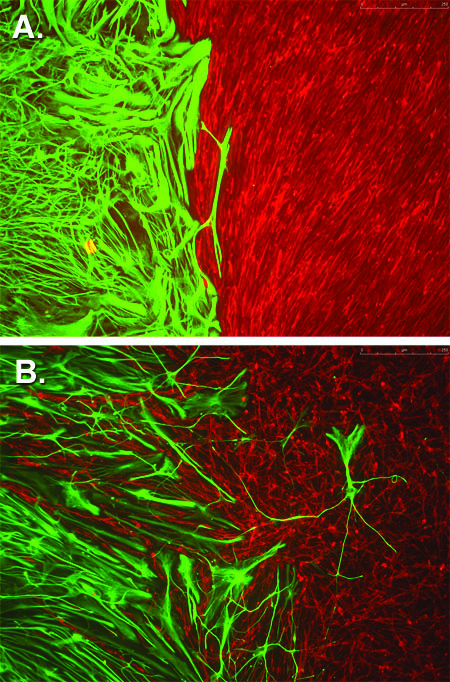 Figure 1. Boundary assay: Schwann-astrocyte interaction. A) A 10 day co-culture assay in the presence of forskolin and BPE to stimulate Schwann cell proliferation demonstrates a sharp boundary between the two cell types(red=P75, green=GFAP). B) A 10 day co-culture assay where the boundary is not formed and the two cell fronts mixed. This was due to mixing of the two droplets while placing astrocyte and Schwann cell droplets next to each other during the preparation of the boundary (red=P75, green=GFAP). 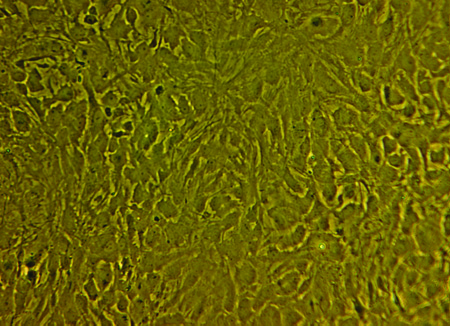 Migration assays assess movement of one cell type over the surface of another cell type and therefore assess a different phenomenon from that of boundary formation.

Practice is needed to ensure inverting the coverslips onto monolayers does not lead to damage to the Schwann cell-covered glass fragments and astrocyte monolayers by the sharp forceps. To assess the migration of Schwann cells, the maximum distance of migration and the number of migrating cells from the edge of coverslip can be measured under light microscope.

Below is the image of Schwann cells stained with P75 antibody using DAB staining on the surface of astrocyte monolayer (Figure 3). 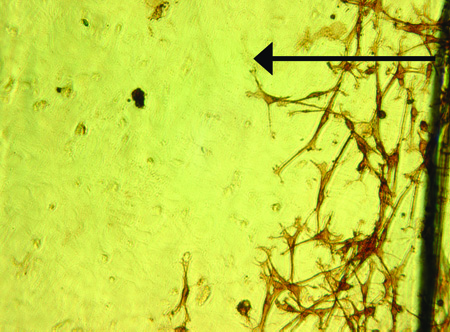 Figure 3. Migration assay using inverted coverslip assay. A) Schwann cells (brown, immunostained with p75 antibody) migrating away from the edge of coverslip. Arrow points to the direction of the cell migration away from the coverslip.

The assays described above have been used in various studies demonstrating the role of multiple factors involved in boundary formation between the Schwann-astrocytes and limited Schwann cell migration in astrocytic environment.

Understanding the mechanisms underlying these events is essential as it would allow development of strategies to optimise and enhance the integration of Schwann cell grafts following transplantation and in doing so facilitate the exit of the regenerating axons from the graft back into the host tissue allowing formation of connections with the host tissue.

We would like to thank Philippa Warren for her kind help. 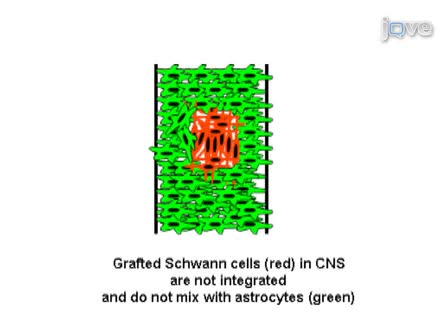