Techniques for measurement of electrical activity of the heart by electrocardiogram (ECG), and analysis of cardiac risk factors and susceptibility to arrhythmias following status epilepticus (SE) in the rat are described.

Lethal cardiac arrhythmias contribute to mortality in a number of pathological conditions. Several parameters obtained from a non-invasive, easily obtained electrocardiogram (ECG) are established, well-validated prognostic indicators of cardiac risk in patients suffering from a number of cardiomyopathies. Increased heart rate, decreased heart rate variability (HRV), and increased duration and variability of cardiac ventricular electrical activity (QT interval) are all indicative of enhanced cardiac risk 1-4. In animal models, it is valuable to compare these ECG-derived variables and susceptibility to experimentally induced arrhythmias. Intravenous infusion of the arrhythmogenic agent aconitine has been widely used to evaluate susceptibility to arrhythmias in a range of experimental conditions, including animal models of depression 5 and hypertension 6, following exercise 7 and exposure to air pollutants 8, as well as determination of the antiarrhythmic efficacy of pharmacological agents 9,10.

It should be noted that QT dispersion in humans is a measure of QT interval variation across the full set of leads from a standard 12-lead ECG. Consequently, the measure of QT dispersion from the 2-lead ECG in the rat described in this protocol is different than that calculated from human ECG records. This represents a limitation in the translation of the data obtained from rodents to human clinical medicine.

Status epilepticus (SE) is a single seizure or series of continuously recurring seizures lasting more than 30 min 11,12 11,12, and results in mortality in 20% of cases 13. Many individuals survive the SE, but die within 30 days 14,15. The mechanism(s) of this delayed mortality is not fully understood. It has been suggested that lethal ventricular arrhythmias contribute to many of these deaths 14-17. In addition to SE, patients experiencing spontaneously recurring seizures, i.e. epilepsy, are at risk of premature sudden and unexpected death associated with epilepsy (SUDEP) 18. As with SE, the precise mechanisms mediating SUDEP are not known. It has been proposed that ventricular abnormalities and resulting arrhythmias make a significant contribution 18-22.

To investigate the mechanisms of seizure-related cardiac death, and the efficacy of cardioprotective therapies, it is necessary to obtain both ECG-derived indicators of risk and evaluate susceptibility to cardiac arrhythmias in animal models of seizure disorders 23-25. Here we describe methods for implanting ECG electrodes in the Sprague-Dawley laboratory rat (Rattus norvegicus), following SE, collection and analysis of ECG recordings, and induction of arrhythmias during iv infusion of aconitine.

These procedures can be used to directly determine the relationships between ECG-derived measures of cardiac electrical activity and susceptibility to ventricular arrhythmias in rat models of seizure disorders, or any pathology associated with increased risk of sudden cardiac death.

8. Analysis of Susceptibility to Ventricular Arrhythmias

Fig. 3 illustrates one measure of HRV in the spectral domain (root mean squared of the standard deviation of the RR interval, RMSSD) in control rats and in animals that underwent SE one week prior to testing. This measure of HRV, which represents changes in the parasympathetic control of cardiac function 26, is significantly decreased in animals following status epilepticus. Fig. 4 shows that both corrected QT interval (QTc, Panel A) and QT dispersion (QTd, Panel B) are significantly increased two weeks following SE27. Taken together, these data predict that SE increases risk of ventricular arrhythmias. This prediction is confirmed by the findings that the periods of aconitine infusion necessary to induce the experimental arrhythmias (PVC, VT, VF) observed in these studies were significantly smaller in animals following SE (Fig. 5)27. 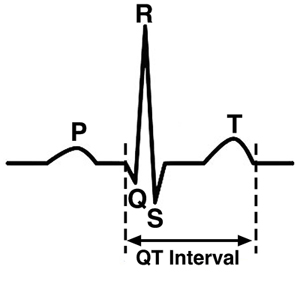 Figure 1.Model ECG recording of a normal heartbeat showing P, QRS, and T waves. The QT interval is calculated as the time between the dashed lines. 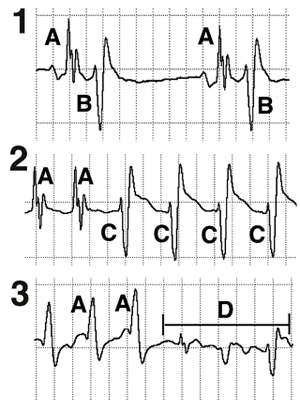 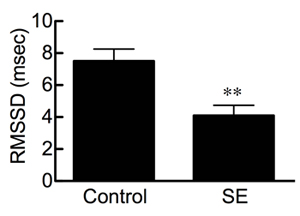 Figure 3. The root mean squared of the standard deviation (RMSSD; msec) of the intervals between heartbeats observed in control rats and in animals undergoing status epilepticus (SE) 1 wk prior to testing. **p<0.01 compared to Control. 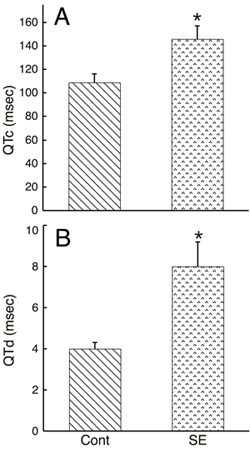 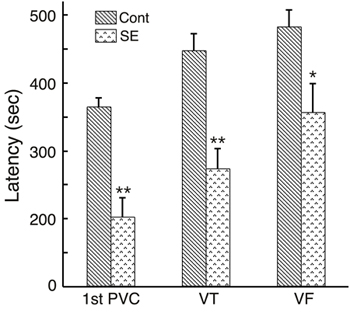 Two aspects of the described procedures are of critical importance. Firstly, the rate of aconitine administration to the heart must be equivalent across animals. This requires consistent placement of the jugular vein catheter tips relative to the heart, and careful adjustment of the infusion rate. The rate of aconitine delivery to the hearts must be equal in order to appropriately evaluate the onset of ventricular arrhythmias relative to altered susceptibility. If aconitine delivery varies, then the latency to arrhythmias may be due to differences in drug concentration and not alterations in cardiac function. Secondly, preparation and placement of the ECG recording electrodes must yield artifact-free recordings with clearly discernable P, QRS, and T waves. While heart rate, HRV, and occurrence of ventricular arrhythmias can be determined from QRS waves alone, QTc and QTd must be calculated from recordings containing clear Q-wave onset, and T-wave termination.

One obvious limitation of these techniques is that they are conducted in anesthetized animals. However, this is necessary for two reasons. 1) Since the ECG electrodes are implanted in skeletal muscle tissue, they are subject to artifacts produced during movement in conscious rats. These non-cardiac signals frequently obscure the ECG activity necessary for appropriate analysis of heart function. 2) Aconitine induced arrhythmias raise a potential ethical issue when evoked in conscious animals.

These procedures allow quantification of several well-accepted prognostic indicators of SCD, along with direct analysis of susceptibility to ventricular arrhythmias in the same animal. These techniques are valuable for determining relative cardiac risk, as well as efficacy of cardioprotective therapies, in seizure disorders, and any pathology associated with lethal ventricular arrhythmias that can be modeled in the rodent.

This research was supported by a grant from the Citizens United for Research in Epilepsy (CURE) to SLB. 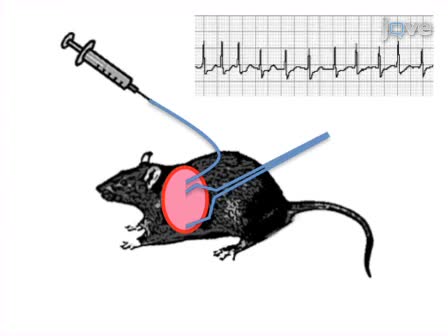