The mouse is an excellent model organism to study mammalian brain development due to the abundance of molecular and genetic data. However, the developing mouse brain is not suitable for easy manipulation and imaging in vivo since the mouse embryo is inaccessible and opaque. Organotypic slice cultures of embryonic brains are therefore widely used to study murine brain development in vitro. Ex-vivo manipulation or the use of transgenic mice allows the modification of gene expression so that subpopulations of neuronal or glial cells can be labeled with fluorescent proteins. The behavior of labeled cells can then be observed using time-lapse imaging. Time-lapse imaging has been particularly successful for studying cell behaviors that underlie the development of the cerebral cortex at late embryonic stages 1-2. Embryonic organotypic slice culture systems in brain regions outside of the forebrain are less well established. Therefore, the wealth of time-lapse imaging data describing neuronal cell migration is restricted to the forebrain 3,4. It is still not known, whether the principles discovered for the dorsal brain hold true for ventral brain areas. In the ventral brain, neurons are organized in neuronal clusters rather than layers and they often have to undergo complicated migratory trajectories to reach their final position. The ventral midbrain is not only a good model system for ventral brain development, but also contains neuronal populations such as dopaminergic neurons that are relevant in disease processes. While the function and degeneration of dopaminergic neurons has been investigated in great detail in the adult and ageing brain, little is known about the behavior of these neurons during their differentiation and migration phase 5. We describe here the generation of slice cultures from the embryonic day (E) 12.5 mouse ventral midbrain. These slice cultures are potentially suitable for monitoring dopaminergic neuron development over several days in vitro. We highlight the critical steps in generating brain slices at these early stages of embryonic development and discuss the conditions necessary for maintaining normal development of dopaminergic neurons in vitro. We also present results from time lapse imaging experiments. In these experiments, ventral midbrain precursors (including dopaminergic precursors) and their descendants were labeled in a mosaic manner using a Cre/loxP based inducible fate mapping system 6.

2. Dissection and embedding of embryonic brains

Steps 4.2-4.5 should be carried out under sterile conditions.

Figure 1 illustrates the preparation of organotypic slice cultures from E12.5 mouse brain. Figure 2 shows horizontal organotypic slices (acute and after several days in culture) obtained form E12.5 mouse brain. For comparison, frozen brain sections at the equivalent developmental stages are shown. Midbrain dopaminergic neurons are visualized with immunohistochemistry for tyrosine hydroxylase (TH). Midbrain dopaminergic neurons project to targets in the forebrain. These projections start to form at E12.5 and extend towards the forebrain during the subsequent days. We consider the development of forebrain projections as a good indication for the normal development of dopaminergic neurons in culture. In the horizontal slices midbrain dopaminergic neurons extend projections towards their proper forebrain target area. After 3 DIV (days in vitro) or when the forebrain target areas are damaged, aberrant projections extend towards the dorsal midbrain. Examples of coronal slices of E12.5 midbrain are shown in Figure 3. Dopaminergic neurons visualized with immunostaining for TH extend aberrant projections to the dorsal midbrain. Figure 4 shows an analysis of proliferating, necrotic and apoptotic cells in the organotypic slice cultures. BrdU immunostaining to visualize proliferating cells demonstrates that cells proliferate under culture conditions after 1 DIV. Proliferation is reduced after 4 DIV. After 3 DIV, many cells in the ventral midbrain undergo necrosis (propidium iodide staining) and apotosis (immunostaining for cleaved caspase-3). Figure 5 shows migratory paths of YFP-labeled neurons monitored in a time-lapse imaging experiment in an acute slice. 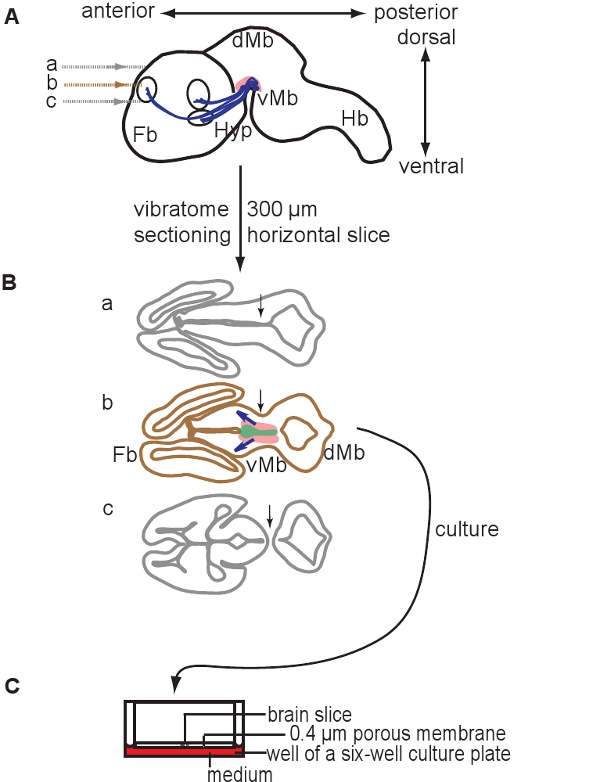 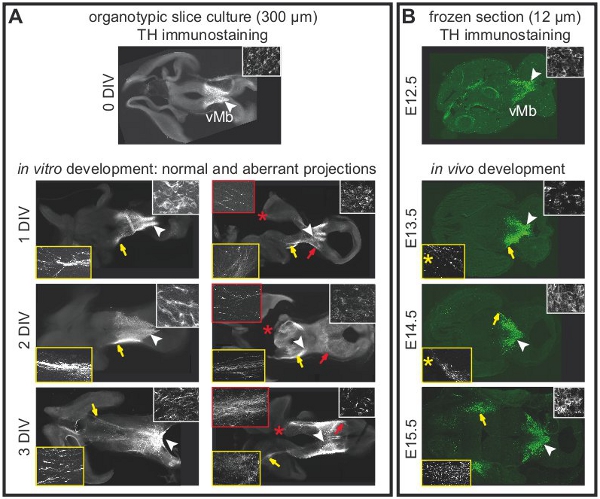 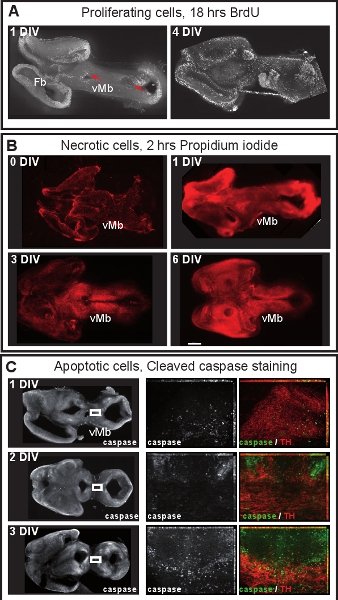 Figure 4. Cell proliferation and cell viability in midbrain organotypic slice cultures. (A) Proliferating cells were labeled by the addition of BrdU (50 ng/mL, Sigma) to the culture medium for 18 h. Slices were subsequently immunostained for BrdU. After 1 DIV, BrdU labeled cells are located in the ventricular zones (red arrows). After 4 DIV, proliferating cells are more scattered and a distinct ventricular zone is no longer maintained. (B) Necrotic cells were labeled by addition of propidium iodide (1μg/μL, Sigma) to the culture medium for 2 hrs and visualized by fluorescence microscopy. After 1 DIV, the ventral midbrain (vMb) is not necrotic, but many propidium iodide labeled cells can be seen in the dorsal midbrain and forebrain. After 3 DIV the cell viability decreases in the ventral midbrain. Scale bar: 500 μm (C) Immunostaing for cleaved caspase-3 to visualize apoptotic cells. At 1 or 2 DIV, only few dopaminergic neurons (TH) are apoptotic. After 3 DIV, dopaminergic neurons start to undergo apoptosis. Panels in the middle and on the right are higher magnifications of the boxed area in the left panels. The higher magnifications images are maximum intensity projections of z-stacks of 14-16 frames. Images were taken every 0.5 μm with an Zeiss Apotome set-up. 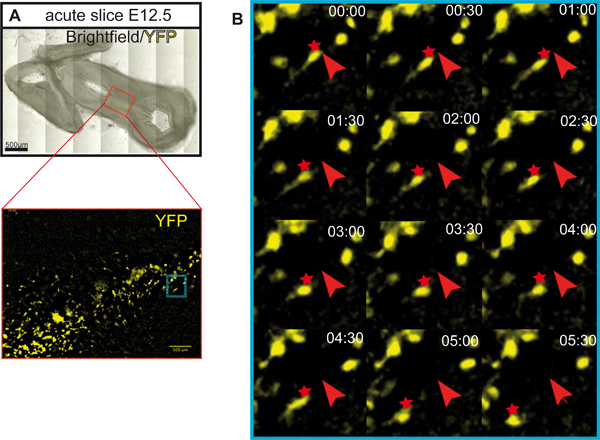 Figure 5. Migratory route of YFP-labeled neurons in an acute slice. (A) Horizontal slice used for time lapse imaging of YFP-labeled neurons. The slice was incubated for 5 hrs prior to imaging. Cells were labeled using an inducible Cre/loxP system6. ShhCreER mice 8 and ROSAloxP-STOP-loxP-EYFP reporter mice 9 were used. Recombination of the ROSA reporter allele (and EYFP expression) is induced in cells that express CreER (Shh-expressing cells), but only upon administration of Tamoxifen (Sigma). In this example, Tamoxifen (3 mg/40 g body weight) was administered to pregnant mice at E8.5. This experimental set-up results primarily in the labeling of precursors of dopaminergic neurons and their descendants in the ventral midbrain10,11 . Scale bar: 500 μm. (B) Tracing the migratory route of YFP-labeled neurons in an acute slice. Time-lapse images of YFP-labeled fate mapped neurons were acquired every 30 min for a total time of 5 hrs 30 min on a Zeiss Axio-Observer microscope (objective EC PlnN 10x /0.3). Slices were incubated in an environmental chamber (incubator XLS1 Pecon) at 37 °C and supplied with 5 % CO2 during the imaging. The initial position of the cells is marked with red arrows; migration positions are marked with red asterisks.

The organotypic slice culture method presented here provides a system for the short-term in vitro analysis of developing dopaminergic neurons and their migratory and projection routes in the embryonic ventral midbrain. We found that there are a number of critical steps in the protocol that should be carefully attended to in order to obtain slices that allow the normal development of ventral midbrain dopaminergic neurons. The most critical step is the dissection of the embryonic brain, which has to be both fast and precise. In contrast to the generation of adult brain slices, it is crucial to section the brains on a vibratome equipped with a cooling system and to use a low frequency combined with a high speed to obtain intact slices of E12.5 brains. Finally, we observed that slices have to be sectioned in the horizontal plane so that in addition to the ventral midbrain the forebrain target areas of the dopaminergic projections are included in the slice. We also noticed that the forebrain has to be intact in these slices in order for normal dopaminergic projections to develop. In coronal slices, the forebrain target areas of the dopaminergic neurons are absent and the neurons form aberrant projections to the dorsal midbrain.

We demonstrate that slices obtained following our protocol can be maintained in vitro for up to 3 days and that dopaminergic neurons maintain their normal position and forebrain projections. Furthermore, the proliferative capacity of the ventricular zone precursors is maintained throughout the slice. However, after more than 3 days in culture, the viability of the slices decreases dramatically. Consequently, the slice cultures obtained from E12.5 brains can be used for assessing early steps in dopaminergic neuronal migration and differentiation, but they cannot be used for long-term experiments. To assess later stages of midbrain development, the generation of slices from slightly older embryos could be an alternative.

We further show that organotypic slice cultures can be used for time-lapse imaging of ventral midbrain precursors and their descendants, which were labeled in vivo using a genetic fate mapping approach. Since the labeling method presented here only marks cell bodies, we have used the slices to track neuronal migration. However, different reporter lines that also label axonal projections could be useful to monitor axonal outgrowth of ventral midbrain neurons in vitro 12.

We thank Martine Emond and Isabel Brachmann for their help in establishing the organotypic slice culture system and Wolfgang Hübner and Liviu Gabriel Bodea for critical reading of the manuscript. We would like to thank Frank Costantini for the R26 reporter mice and Cliff Tabin for the ShhCreER mice. This study was funded by a Research Award from the Ministry of Science and Research of North-Rhine Westphalia (Programm zur Förderung der Rückkehr des wissenschaftlichen Spitzennachwuchses aus dem Ausland). 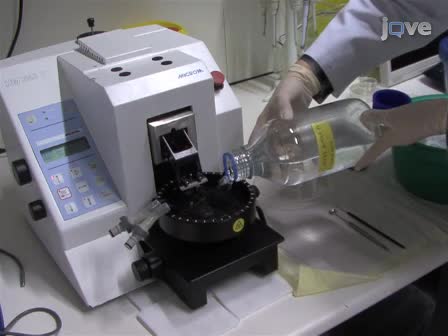