Conditioned fear can be diminished through an inhibitory process called extinction, but can resurface under conditions such as the passage of time or exposure to stress. Our protocol presents a novel way of preventing fear recovery by introducing extinction during the reconsolidation window (the re-storage phase of a reactivated memory).

Fear is maladaptive when it persists long after circumstances have become safe. It is therefore crucial to develop an approach that persistently prevents the return of fear. Pavlovian fear-conditioning paradigms are commonly employed to create a controlled, novel fear association in the laboratory. After pairing an innocuous stimulus (conditioned stimulus, CS) with an aversive outcome (unconditioned stimulus, US) we can elicit a fear response (conditioned response, or CR) by presenting just the stimulus alone1,2 . Once fear is acquired, it can be diminished using extinction training, whereby the conditioned stimulus is repeatedly presented without the aversive outcome until fear is no longer expressed3. This inhibitory learning creates a new, safe representation for the CS, which competes for expression with the original fear memory4. Although extinction is effective at inhibiting fear, it is not permanent. Fear can spontaneously recover with the passage of time. Exposure to stress or returning to the context of initial learning can also cause fear to resurface3,4.

Our protocol addresses the transient nature of extinction by targeting the reconsolidation window to modify emotional memory in a more permanent manner. Ample evidence suggests that reactivating a consolidated memory returns it to a labile state, during which the memory is again susceptible to interference5-9. This window of opportunity appears to open shortly after reactivation and close approximately 6hrs later5,11,16, although this may vary depending on the strength and age of the memory15. By allowing new information to incorporate into the original memory trace, this memory may be updated as it reconsolidates10,11. Studies involving non-human animals have successfully blocked the expression of fear memory by introducing pharmacological manipulations within the reconsolidation window, however, most agents used are either toxic to humans or show equivocal effects when used in human studies12-14. Our protocol addresses these challenges by offering an effective, yet non-invasive, behavioral manipulation that is safe for humans.

By prompting fear memory retrieval prior to extinction, we essentially trigger the reconsolidation process, allowing new safety information (i.e., extinction) to be incorporated while the fear memory is still susceptible to interference. A recent study employing this behavioral manipulation in rats has successfully blocked fear memory using these temporal parameters11. Additional studies in humans have demonstrated that introducing new information after the retrieval of previously consolidated motor16, episodic17, or declarative18 memories leads to interference with the original memory trace14. We outline below a novel protocol used to block fear recovery in humans.

The study we describe in this protocol is conducted over three consecutive days, with a between-subject design of three experimental groups. On day 1, all subjects undergo fear conditioning, where they learn to discriminate between two cues, one that predicts a shock and another that doesn't. On day 2, all subjects undergo extinction training, but differ regarding to what happens beforehand: Two groups receive a reminder cue to reactivate the fear memory before extinction training whereas a third group receives no such cue. One group receives the reminder cue 10 min before extinction, thus they undergo extinction while the fear memory is reconsolidating. The other group receives the reminder cue 6 hr before extinction, thus they undergo extinction after this window has presumably closed. The third group receives no reminder cue before undergoing extinction, thus they undergo standard extinction training. On Day 3, all subjects return for another extinction session. Their level of fear when they first see the conditioned cue on Day 3 indicates whether the fear memory remains. All three days are conducted in the same experimental setting, which is a sound-attenuated, temperature-controlled room. The conditioned stimuli are colored squares presented on a computer screen. We induce and measure fear with a mild electric shock and skin conductance, respectively, using a Biopac system module (see Table 1). A desktop computer is used to run the AcqKnowledge software program that allows for the recording and monitoring of SCR while a separate computer is used to run and present the experimental script to the subject. The subjects undergo all three stages around the same time of the day.

Randomly divide all subjects that have demonstrated adequate acquisition of fear from day 1 (see Exclusion Criteria below) into three groups:

7. Representative Results for Each Group

Figure 1. Example of SCR during electrode set up. Black, vertical arrows indicate the point at which subject was instructed to take a deep breath which resulted in a marked increase in SCR. Click here to view larger figure. 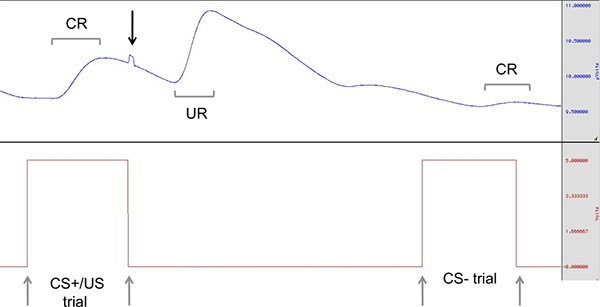 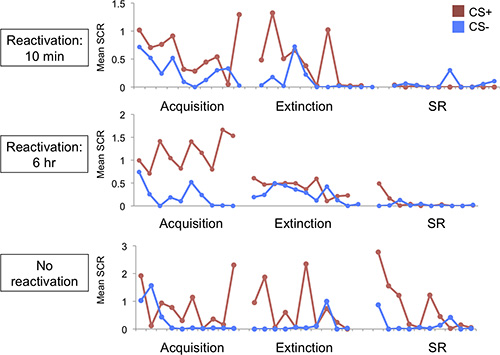 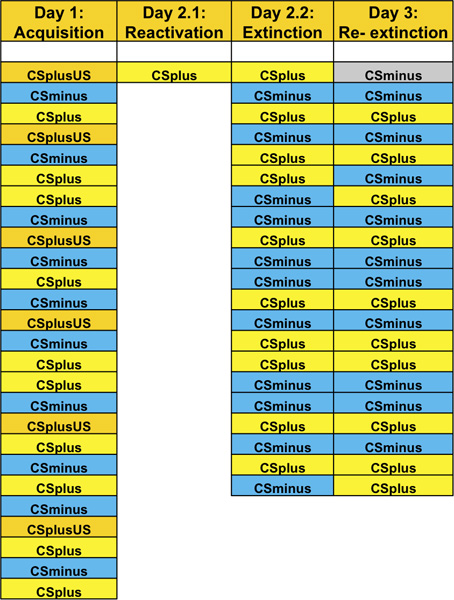 Table 3. An example of trial order for each phase of the experiment. Note one extra CS- should be added to Day 2.2 (extinction) in both reminder groups in order to account for the reactivation of the CS+. The first CS- trial on Day 3 (denoted with grey background) is disregarded due to the orienting response at the beginning of the session.

Subjects should be excluded before completing all experimental sessions or from data analysis if they demonstrate any of the following:

The protocol we presented here enables creating a simple conditioned fear response to a neutral stimulus paired with an aversive outcome. A day later we reactivated the fear memory in order to trigger its reconsolidation. During this stage we induced interference in the form of extinction training. To verify that extinction affects reconsolidation we used two control groups. One group underwent extinction without the reminder trial triggering reconsolidation, and another group experienced the reminder trial but then underwent extinction outside the reconsolidation window. We then measured, during the next day, whether the memory spontaneously recovered or whether the fear response to the conditioned stimuli failed to recover.

Pavlovian conditioning is a classic paradigm that has been widely used in the last few decades across many species. Animal research has described the neural mechanisms underlying the formation of the fear association and its extinction in great detail19,20. Studies in humans have successfully adapted this protocol to elucidate the neural correlates in the human brain21-24. The current protocol is a subtle variation of this well-established paradigm and therefore ideal to reveal, characterize and manipulate reconsolidation in humans. 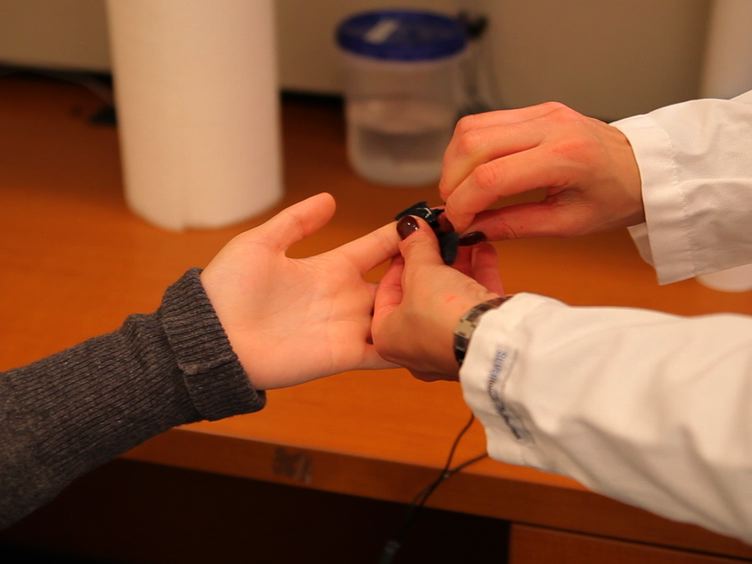