We demonstrate how to use the RNAi feeding technique to knock down target genes and score body size phenotype in C. elegans. This method could be used for a large scale screen to identify potential genetic components of interest, such as those involved in body size regulation by DBL-1/TGF-β signaling.

Double-strand RNA-mediated interference (RNAi) is an effective strategy to knock down target gene expression1-3. It has been applied to many model systems including plants, invertebrates and vertebrates. There are various methods to achieve RNAi in vivo4,5. For example, the target gene may be transformed into an RNAi vector, and then either permanently or transiently transformed into cell lines or primary cells to achieve gene knockdown effects; alternatively synthesized double-strand oligonucleotides from specific target genes (RNAi oligos) may be transiently transformed into cell lines or primary cells to silence target genes; or synthesized double-strand RNA molecules may be microinjected into an organism. Since the nematode C. elegans uses bacteria as a food source, feeding the animals with bacteria expressing double-strand RNA against target genes provides a viable strategy6. Here we present an RNAi feeding method to score body size phenotype. Body size in C. elegans is regulated primarily by the TGF- β - like ligand DBL-1, so this assay is appropriate for identification of TGF-β signaling components7. We used different strains including two RNAi hypersensitive strains to repeat the RNAi feeding experiments. Our results showed that rrf-3 strain gave us the best expected RNAi phenotype. The method is easy to perform, reproducible, and easily quantified. Furthermore, our protocol minimizes the use of specialized equipment, so it is suitable for smaller laboratories or those at predominantly undergraduate institutions.

In our research, we focus on body size regulation by the DBL-1/TGF-β pathway. The loss of function of the DBL-1 pathway results in small body size, including a shorter body length compared with wild-type animals7,10,11. Thus, screens for C. elegans body size mutants are capable of identifying TGF-β signaling components and modifiers. DBL-1 signaling is mediated by a conserved TGF-β signal transduction pathway that includes cell surface receptors and intracellular Smad signal transducers12. To test the effectiveness of RNAi by feeding for the identification of body size mutants, we used this technique to knock down DBL-1 pathway components: dbl-1/ligand; sma-2, sma-3, sma-4/Smads; and sma-6/receptor. For our study, we used two different RNAi hypersensitive C. elegans strains to perform the experiment: eri-1;lin-15b and rrf-313,14. Meanwhile, we also used N2 (standard wild-type) strain and lin-36, a component in the lin-15 pathway whose RNAi sensitivity is nevertheless similar to N213. Our results (Figure 2) show that all of these strains displayed the short body size phenotype as expected (p<0.001), except sma-6 RNAi in lin-36 background. In rrf-3 background, body lengths of young adults after RNAi treatment were 84~95% of vector alone. In eri-1;lin-15b background, body lengths of young adults after RNAi were 68~86% of control animals. Compared with lin-36 and N2 strains, both of the RNAi hypersensitive strains rrf-3 and eri-1;lin-15b were more sensitive.

Figure 2. Body length of animals in which DBL-1 pathway components have been inactivated by RNAi feeding method. RNAi animals in all of these background strains displayed the short body length phenotype as expected (p<0.001), except sma-6 RNAi in lin-36 background. RNAi of rrf-3 and eri-1;lin-15b strains demonstrated a stronger phenotype than that of lin-36 and N2 backgrounds. 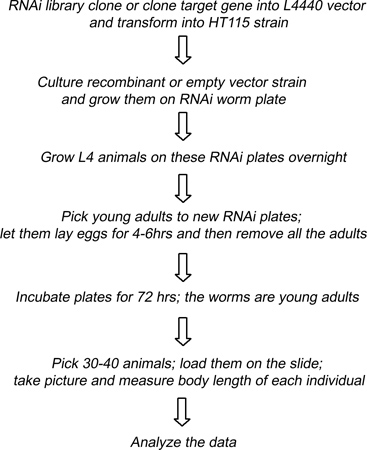 In this protocol, we describe our method for the identification of body size defective mutants of C. elegans by RNAi feeding. This method is applicable to the identification of TGF-β signaling components. Since such components are highly conserved through evolution15, such screens are relevant to elucidating the molecular mechanisms of TGF-β signaling in all metazoans. An important consideration in designing such a screen is the starting strain. We have demonstrated that both eri-1;lin-15b and rrf-3 are more sensitive to RNAi feeding than the control strains, which is consistent with previous studies12,13. However, even though eri-l;lin-15b demonstrated the strongest phenotype, the animals did not grow well and produced few progeny. Thus, in a large-scale screen, we would not have enough animals for scoring phenotypes from this strain. As a result, we favor the rrf-3 strain to apply the RNAi feeding technique to body size regulation. A second choice to consider in the starting strain is whether to initiate a screen with the DBL-1 pathway intact or to begin with a sensitized strain in which the DBL-1 pathway is either compromised or overactive. These alternative starting points are likely to lead to the identification of overlapping but distinct sets of signaling components. Our protocol can also be modified to the study of other postembryonic phenotypes. In this case, the stage of the animals to be scored for the phenotype of interest may need to be modified by altering the duration of growth in step 2.5. Prior to initiating a large scale screen for other phenotypes, we would recommend a pilot screen with genes known to produce the phenotype of interest such as we describe here for dbl-1, sma-2, sma-3 sma-4, and sma-6.

By using this protocol, knocking down DBL-1 pathway components showed expected body length phenotype. Those RNAi animals were about 68-95% in length compared with control animals. In previous studies, DBL-1 pathway loss of function genetic mutants in adulthood are about 50% shorter than wild-type animals7,10,11. Therefore, the RNAi feeding technique presented here did not fully eliminate gene activity. Thus, the method may be limited in its ability to identify pathway components that have a weak phenotype. Meanwhile, since there are many genes that regulate body length, genes identified from the screen also might not necessarily fall in DBL-1 pathway. Further experiments should be performed to place candidates in pathways, as is true for any other screen method.

In summary, RNAi feeding screens in C. elegans have proven useful in identifying genes involved in a process of interest. In this protocol, we have optimized existing protocols to be highly effective in the identification of body size defects. The optimized protocol can be further modified for the study of other postembryonic phenotypes.

We thank James Clark for providing figures of animals at various developmental time points. C. elegans strains in this study were obtained from the Caenorhabditis Genetics Center, which is supported by the NIH National Center for Research Resources (NCRR). This work was supported by CIRG 1817 from CUNY to J.L. and C.S.D.; and by NIH 1R15GM073678-01 and 1R15GM097692-01 to C.S.D. We thank Dr. William J Rice, Dr. Nathalia Holtzman, and Melissa Silvestrini for comments on the manuscript. This work was carried out in partial fulfillment of the requirements for a PhD degree from the Graduate Center of the City University of New York (S. Xiong). 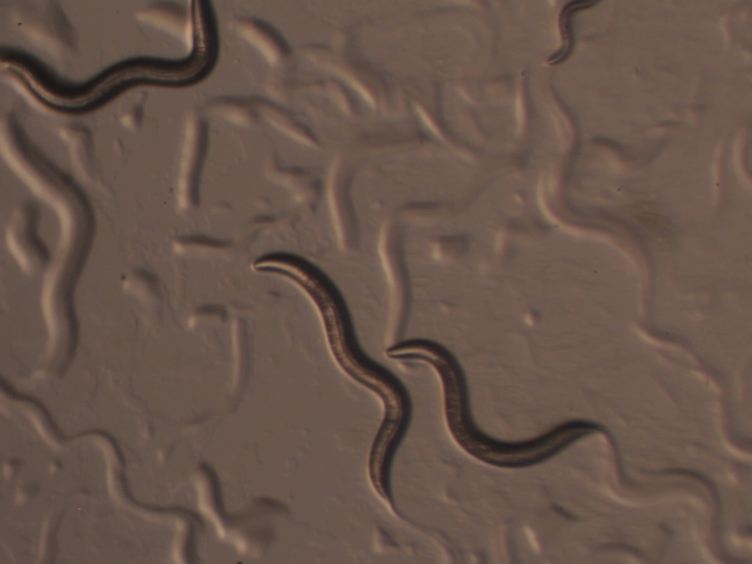