Oral and intra haemocolic infection of larvae of the greater wax moth Galleria mellonella is described. This insect can be used to study virulence factors of entomopathogenic as well as mammalian opportunistic bacteria. Rearing of the insects, methods of infection and examples of in vivo analysis are described.

The study of bacterial virulence often requires a suitable animal model. Mammalian models of infection are costly and may raise ethical issues. The use of insects as infection models provides a valuable alternative. Compared to other non-vertebrate model hosts such as nematodes, insects have a relatively advanced system of antimicrobial defenses and are thus more likely to produce information relevant to the mammalian infection process. Like mammals, insects possess a complex innate immune system1. Cells in the hemolymph are capable of phagocytosing or encapsulating microbial invaders, and humoral responses include the inducible production of lysozyme and small antibacterial peptides2,3. In addition, analogies are found between the epithelial cells of insect larval midguts and intestinal cells of mammalian digestive systems. Finally, several basic components essential for the bacterial infection process such as cell adhesion, resistance to antimicrobial peptides, tissue degradation and adaptation to oxidative stress are likely to be important in both insects and mammals1. Thus, insects are polyvalent tools for the identification and characterization of microbial virulence factors involved in mammalian infections.

Larvae of the greater wax moth Galleria mellonella have been shown to provide a useful insight into the pathogenesis of a wide range of microbial infections including mammalian fungal (Fusarium oxysporum, Aspergillus fumigatus, Candida albicans) and bacterial pathogens, such as Staphylococcus aureus, Proteus vulgaris, Serratia marcescens Pseudomonas aeruginosa, Listeria monocytogenes or Enterococcus faecalis4-7. Regardless of the bacterial species, results obtained with Galleria larvae infected by direct injection through the cuticle consistently correlate with those of similar mammalian studies: bacterial strains that are attenuated in mammalian models demonstrate lower virulence in Galleria, and strains causing severe human infections are also highly virulent in the Galleria model8-11. Oral infection of Galleria is much less used and additional compounds, like specific toxins, are needed to reach mortality.

G. mellonella larvae present several technical advantages: they are relatively large (last instar larvae before pupation are about 2 cm long and weight 250 mg), thus enabling the injection of defined doses of bacteria; they can be reared at various temperatures (20 °C to 30 °C) and infection studies can be conducted between 15 °C to above 37 °C12,13, allowing experiments that mimic a mammalian environment. In addition, insect rearing is easy and relatively cheap. Infection of the larvae allows monitoring bacterial virulence by several means, including calculation of LD5014, measurement of bacterial survival15,16 and examination of the infection process17. Here, we describe the rearing of the insects, covering all life stages of G. mellonella. We provide a detailed protocol of infection by two routes of inoculation: oral and intra haemocoelic. The bacterial model used in this protocol is Bacillus cereus, a Gram positive pathogen implicated in gastrointestinal as well as in other severe local or systemic opportunistic infections18,19.

The whole cycle from egg to last instar larvae lasts about 5 weeks at 25 °C. One or 2 additional weeks are needed to obtain adult butterflies.

Intra haemocoelic injection of bacteria into G. mellonella has been proven very useful for the identification of many virulence factors dealing with tissue damage and resistance to innate immune factors of several human pathogens. As an example, figure 2A represents insect mortality after injection of various doses of B. cereus bacteria (wild type and mutant strains)22. Figure 2B represents bacterial survival after infection of G. mellonella by Pseudomonas aeruginosa4.

The use of Galleria as an oral infection model for B. cereus and B. thuringiensis relies on the evaluation of the synergistic effect of the vegetative bacteria or spores on the insecticidal activity of the Cry1C toxin10. The larvae are susceptible to the ingestion of spore/toxin mixture but are only weakly susceptible to the ingestion of Cry1C toxin alone. The larval death results from septicemia after bacteria have reached the haemocoel following the breakdown of the intestinal barriers. Figure 3 represents larval mortality after ingestion of crystals and either wild type or mutant strains of Bacillus bacteria10.

Few bacteria have been tested for oral infection in Galleria. Amongst the human pathogens tested, B. cereus strains with Cry1C toxin were the most virulent for G. mellonella after oral infection24. This method can be used to monitor infection/colonization of the gastro intestinal tract. Indeed, as shown in Figure 4, the larva digestive tract can be extracted after infection, and host cell modifications as well as bacterial colonization can be visualized on histological paraffin sections. In addition, ingestion of fluorescent bacteria can be used to follow the trajectory and the colonization process along the different compartments of the larvae. Finally, the specific expression of a gene in the different insect compartments can be monitored by fluorescent microscopy25. 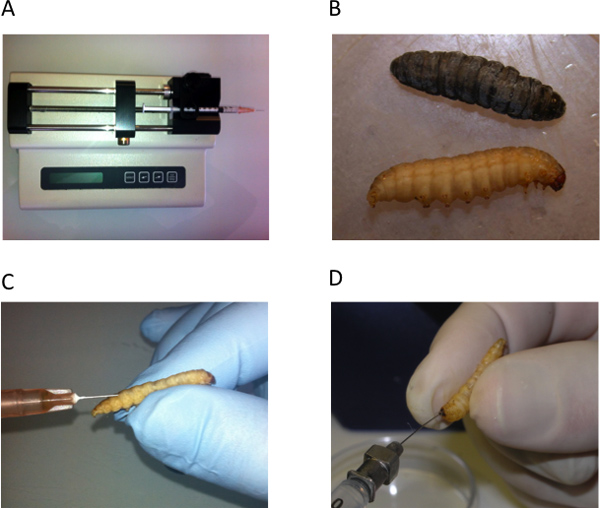 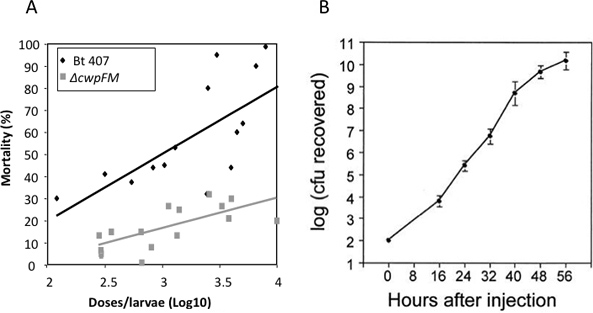 Figure 2. Results after intra haemocoelic injection. (A) CwpFM virulence against G. mellonella larvae22. Various concentrations of B. cereus wild-type (Bt 407) and ΔcwpFM mutant strains were inoculated into the haemocoel of 20 G. mellonella larvae. Mortality was recorded after 24 hr at 37 °C. (B) Time course of Pseudomonas aeruginosa PA14 infection in G. mellonella4. Twenty-five bacteria per larva were injected at time zero. Larvae were crushed at the indicated time points post-infection and bacterial counts were determined by plating. Each data point represents the mean and standard deviation of bacterial counts from 10 groups of 10 larvae. Larvae died approximately 48 hr after injection, when bacterial concentrations reached 109/g. 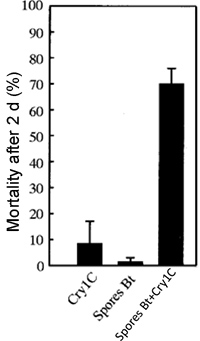 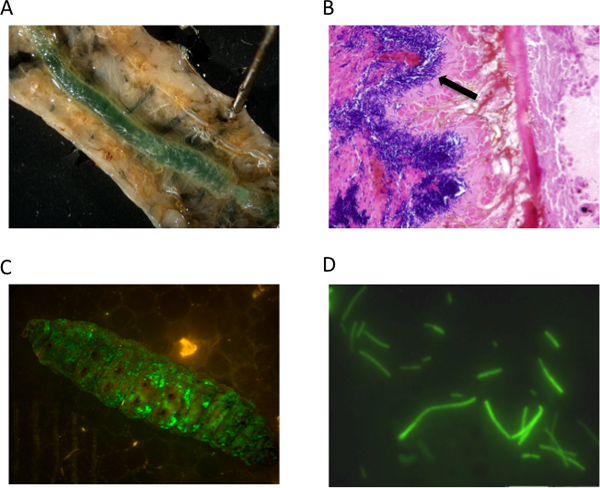 Movie 1. Spreading of solution in the insect gut following oral ingestion. 10 μl of blue dye solution was introduced by force-feeding into the mouth of the European corn borer Ostrinia nubilalis larva. The dye quickly fills in the intestinal lumen of the insect larvae. Click here to view movie.

The use of insects and especially the larval stage, as infection models for several pathogens, is becoming frequent. A model of choice for some aspects is Drosophila (the fly model) used as both adults and larval stage1,2. The lepidopteran insect G. mellonella has also been mainly used for assaying bacterial virulence by injection. The advantage of tolerating higher temperatures (above 37 °C) than Drosophila (maximum 25 °C) is important when mammal pathogens are to be studied. Also the size of Galleria is more convenient for studying infection kinetics and tissue damage. Finally, our protocol describes the possibility to use Galleria for oral infection, which is an advantage for studies related to the digestive tract. Similarly, the larval stage of another large caterpillar, Manduca sexta, is used to study infections by injection into the haemocoel and more recently for oral infection26. B. mori and Spodoptera species, which genomes are sequenced27 also offer interesting alternatives, and host genes can be shut down by RNAi methods or other gene manipulations28. Here, we describe in a simple way, how to rear Galleria larvae, how to infect them and some examples on how to follow the infection process and score mortality in order to show the potential of such models.

We would like to thank Elisabeth Guillemet, Christophe Buisson and Ludovic Bridoux for excellent technical assistance. We are greatly indebted to Sylvie Salamitou and Sinda Fedhila for the initial system setup. 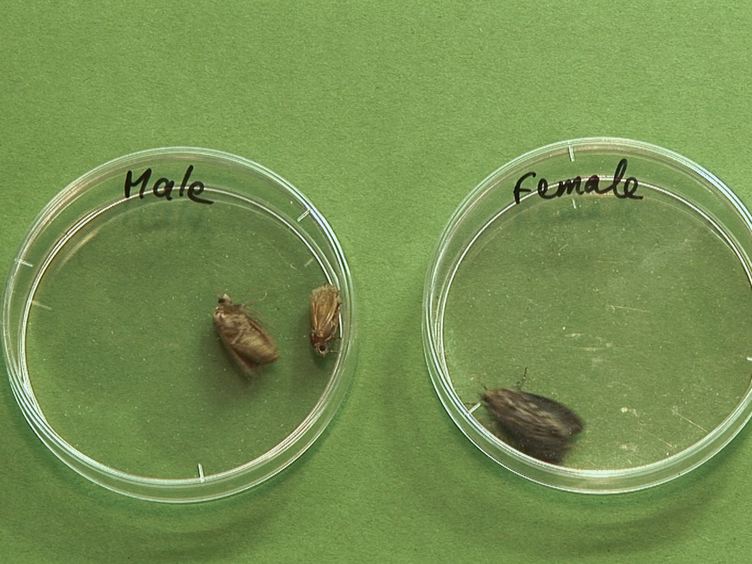