Probe-based confocal laser endomicroscopy (CLE) is an emerging optical imaging technology that enables real-time in vivo microscopy of mucosal surfaces during standard endoscopy. With applications currently in the respiratory1 and gastrointestinal tracts,2-6 CLE has also been explored in the urinary tract for bladder cancer diagnosis.7-10 Cellular morphology and tissue microarchitecture can be resolved with micron scale resolution in real time, in addition to dynamic imaging of the normal and pathological vasculature.7

The probe-based CLE system (Cellvizio, Mauna Kea Technologies, France) consists of a reusable fiberoptic imaging probe coupled to a 488 nm laser scanning unit. The imaging probe is inserted in the working channels of standard flexible and rigid endoscopes. An endoscope-based CLE system (Optiscan, Australia), in which the confocal endomicroscopy functionality is integrated onto the endoscope, is also used in the gastrointestinal tract. Given the larger scope diameter, however, application in the urinary tract is currently limited to ex vivo use.11 Confocal image acquisition is done through direct contact of the imaging probe with the target tissue and recorded as video sequences. As in the gastrointestinal tract, endomicroscopy of the urinary tract requires an exogenenous contrast agent—most commonly fluorescein, which can be administered intravenously or intravesically. Intravesical administration is a well-established method to introduce pharmacological agents locally with minimal systemic toxicity that is unique to the urinary tract. Fluorescein rapidly stains the extracellular matrix and has an established safety profile.12 Imaging probes of various diameters enable compatibility with different caliber endoscopes. To date, 1.4 and 2.6 mm probes have been evaluated with flexible and rigid cystoscopy.10 Recent availability of a < 1 mm imaging probe13 opens up the possibility of CLE in the upper urinary tract during ureteroscopy. Fluorescence cystoscopy (i.e. photodynamic diagnosis) and narrow band imaging are additional endoscope-based optical imaging modalities14 that can be combined with CLE to achieve multimodal imaging of the urinary tract. In the future, CLE may be coupled with molecular contrast agents such as fluorescently labeled peptides15 and antibodies for endoscopic imaging of disease processes with molecular specificity.

CLE images are saved as grayscale video sequence files at 12 frames per second. Image interpretation is done in real time and may be used to impact clinical decision making under an investigational protocol. Offline analysis, which includes reviewing of the video sequence, additional image processing such as mosaicing,7 and comparison with standard pathology, are important during the learning curve phase associated with the technology. Figures 1B and 1C are representative CLE images obtained from two different bladder tumors using intravesical and intravenous fluorescein, respectively. For bladder tumors, cellular features (e.g. morphology, cohesiveness and borders) and microarchitectural features (e.g. flat versus papillary tumors, tissue organization and vascular features) are noted to differentiate between benign and malignant lesions and low and high grade cancer. Given the imaging probes may be interchanged between different types of cystoscopes, CLE can be combined with other emerging imaging modalities including fluorescence cystoscopy (Figure 2A) and narrow band imaging (Figure 2B), which may improve the diagnostic accuracy of either technology by itself. 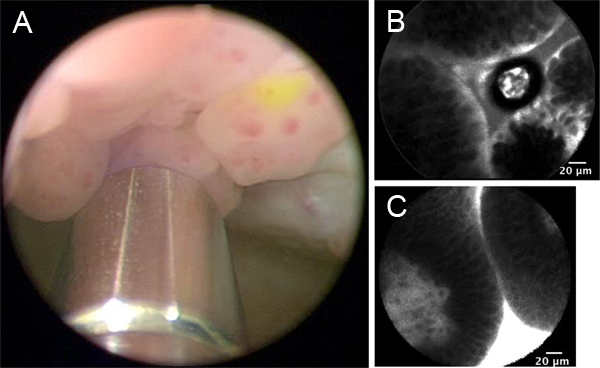 Attaining and maintaining solid en face contact between the imaging probe and the bladder mucosa is the most critical step in acquiring optimal image quality. There is approximately a 3-5 patient learning curve to develop the dexterity to manipulate the imaging probe and to hold the probe steady during image acquisition. Additionally, as this procedure is conducted in vivo, patient movements (i.e. respiratory) and vascular pulsations may affect the imaging probe contact with the bladder. The interobserver variance and the learning curve of image interpretation, which requires experience with wide spectrum of bladder pathology, are currently under investigation. Variation in image quality may be attributed to tissue variability and underlying pathology. Imaging of the normal areas, in addition to the suspicious appearing areas, is useful to assess image quality and fluorescein staining.

Cautery marking of each region of interest is helpful in facilitating re-localization of the imaged and excised tissues, as the bladder is emptied and refilled repeatedly between image acquisition and resection. This step, called co-registration, is important for comparative analysis to correlate images obtained by CLE with histology. Both procedures for intravesical and intravenous administration of fluorescein are described above, with some differences in regards to timing and requirement for intravenous access.8

A 2.6 mm imaging probe was used in this demonstration. However, the principle of accessing the bladder with probe-based technology could be utilized in future generations of imaging probes that enhance image quality in smaller and more maneuverable probes. Imaging probes 1 mm in diameter have recently been described.13 These smaller imaging probes may allow CLE imaging in outpatient cystoscopy as well as in vivo confocal imaging of the upper urinary tract during ureteroscopy.

The authors would like to thank Mauna Kea Technologies for technical support. The authors also thank Shelly Hsiao for technical assistance and Kathleen E. Mach for critical review. This work was supported in part by NIH R01CA160986 to J.C.L. 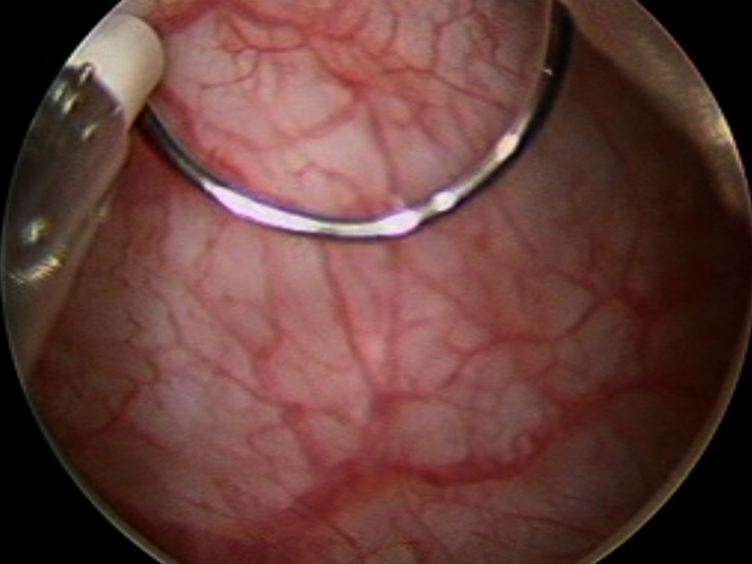