This study describes the procedures of setting up a novel neuronal axon and (astro)glia co-culture platform. In this co-culture system, manipulation of direct interaction between a single axon (and single glial cell) becomes feasible, allowing mechanistic analysis of the mutual neuron to glial signaling.

Proper neuron to glia interaction is critical to physiological function of the central nervous system (CNS). This bidirectional communication is sophisticatedly mediated by specific signaling pathways between neuron and glia1,2 . Identification and characterization of these signaling pathways is essential to the understanding of how neuron to glia interaction shapes CNS physiology. Previously, neuron and glia mixed cultures have been widely utilized for testing and characterizing signaling pathways between neuron and glia. What we have learned from these preparations and other in vivo tools, however, has suggested that mutual signaling between neuron and glia often occurred in specific compartments within neurons (i.e., axon, dendrite, or soma)3. This makes it important to develop a new culture system that allows separation of neuronal compartments and specifically examines the interaction between glia and neuronal axons/dendrites. In addition, the conventional mixed culture system is not capable of differentiating the soluble factors and direct membrane contact signals between neuron and glia. Furthermore, the large quantity of neurons and glial cells in the conventional co-culture system lacks the resolution necessary to observe the interaction between a single axon and a glial cell.

In this study, we describe a novel axon and glia co-culture system with the use of a microfluidic culture platform (MCP). In this co-culture system, neurons and glial cells are cultured in two separate chambers that are connected through multiple central channels. In this microfluidic culture platform, only neuronal processes (especially axons) can enter the glial side through the central channels. In combination with powerful fluorescent protein labeling, this system allows direct examination of signaling pathways between axonal/dendritic and glial interactions, such as axon-mediated transcriptional regulation in glia, glia-mediated receptor trafficking in neuronal terminals, and glia-mediated axon growth. The narrow diameter of the chamber also significantly prohibits the flow of the neuron-enriched medium into the glial chamber, facilitating probing of the direct membrane-protein interaction between axons/dendrites and glial surfaces.

3. Addition of Cultured Astrocytes to MCP to Establish a Compartmentalized Co-culture System

Primary astrocyte cultures were prepared from the P1-3 mouse pup brain. The brain dissociation procedure is similar to the neuronal cell isolation procedure described above. Astrocytes were first plated into 10 cm dish that were pre-coated with Polyornithine (Sigma-Aldrich, 1 mg/ml). The astrocyte culture medium (DMEM, 10% fetal bovine serum, 1% Penicillin-streptomysin) was changed every day for the next two days to remove the debris. After that, the medium was changed every three days.

The compartmented neuron and astrocyte co-culture system allows only the neuronal processes, especially the axons, to selectively interact with astrocytes. Following the successful establishment of axon and astrocyte (or other glial cells) co-culture in the assembled MCP, different types of axon-glia interactions can be studied such as; axon-induced activation of astroglial gene promoter activation, astrocyte-induced axon guidance, axon-induced astroglial Ca2+ response, and axon-induced myelin synthesis in oligodendrocytes. All of these applications take advantage of the availability of powerful fluorescent reporters available for glial cells or dyes loaded to these cells.

Here we describe axon-induced transcriptional activation of astroglial glutamate transporter 1 (GLT1) promoter by using bacterial artificial chromosome (BAC) GLT1 eGFP transgenic mice and this compartmentalized co-culture system. In the BAC GLT1 eGFP transgenic mice, an eGFP fluorescence reporter was overexpressed under the control of the GLT1 genomic promoter7. The expression of the eGFP reporter correlates with endogenous GLT1 promoter activation protein expression and functional activity7 thus permitting an assessment of the GLT1 promoter activity in single astrocytes in situ. Astroglial GLT1 expression is highly dependent upon neuronal stimulation6,8 . Primary astrocytes express minimum levels of GLT1; however, GLT1 expression levels (both mRNA and protein) are strongly induced in astrocytes that are co-cultured with neurons9. The evidence is shown here by significantly increased GLT1 immunoreactivity in compartmentalized co-culture system (Figure 3). In conventional neuron and astrocyte co-cultures, high density of neurons make it less ideal to observe the effect of neuronal axons on the transcriptional activation of GLT1 promoter. 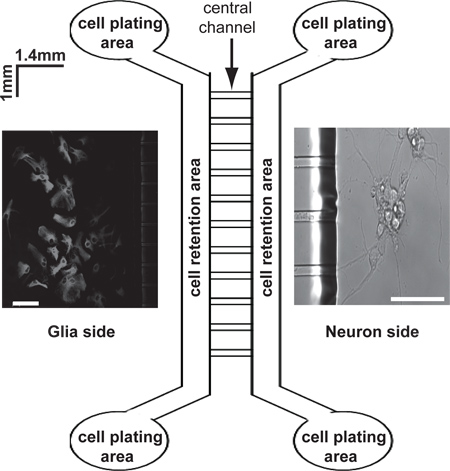 Figure 1. Schematic diagram of microfluidic neuron and astrocyte co-culture platform. Microfluidic culture platform (MCP) has two compartments that are connected through the central channels. Cells can be plated from the cell plating area on each side and neuronal axons are induced from the cell retention area and pass through the central channels to enter the other side (insert scale bar 50 μm). 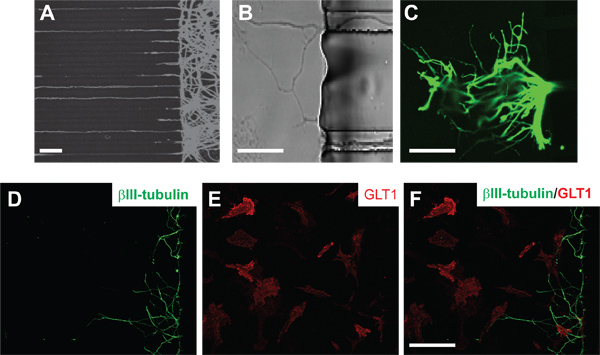 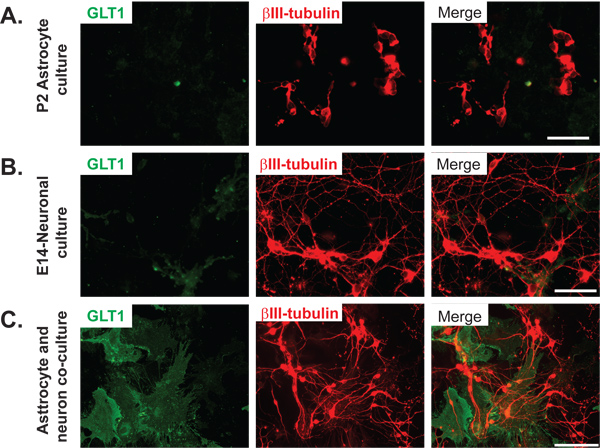 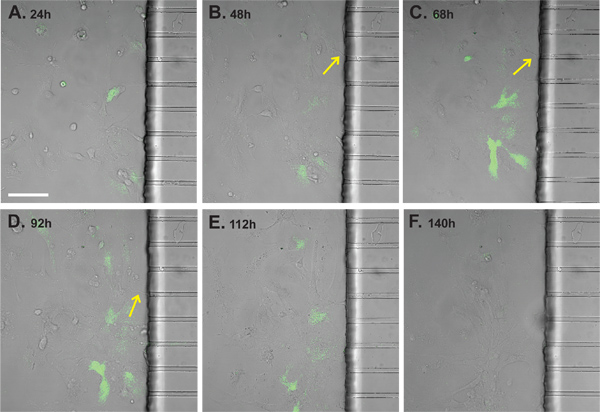 Figure 4. Time-lapse images of axon-induced GLT1 promoter activation in MCP with BAC GLT1 eGFP astrocytes and wild type neurons. Dynamic changes of eGFP intensity and the growth of axons were collected through a 6d time-lapse recording following astrocyte plating. (A) 24h (B) 48h (C) 68h (D) 92h (E) 112h (F) 140h. Entry of axons (highlighted by the yellow arrows) into the astrocyte side was observed from 48h to 92h which correlate with increased eGFP fluorescence intensity. Decrease of eGFP fluorescence intensity occurred from 112h to 140h after kainite (200 μM) was applied on the neuronal side at 92h to induce neuronal cell death and axon degeneration. Scale bar: 50 μm.

This MCP based neuron and astroglia co-culture system offers several advantages compared to conventional co-culture methods: 1) ability to visualize and identify the explicit morphological interaction between single axons and astrocytes in real-time under high-resolution microscopy 2) a well-controlled independent microenvironment to apply pharmacological manipulation for cell-specific effect 3) analysis of promoter activation and protein expression exclusively induced/up-regulated in astrocytes that are modulated by axons contact. As the culture procedures for primary microglia10 and oligodendrocytes11 have been well established, this MCP co-culture system can be also applied to neuron to microglia and neuron to oligodendrocyte co-cultures. Meanwhile, we also recognize that this co-culture system is intended for the sensitive image analysis at the single cell level, which is complementary to the conventional approaches of analyzing large quantity of cells, such as RNA or protein analysis. In addition, our system simplifies the enormous interaction between neurons and glial cells in vivo by exemplifying interaction between single cell and axon. All of these should be considered when interpreting the results from this co-culture system. In the CNS, interactions between axons and different glial cells are widely present and are critically important for both neuron and glial functions12,13 . Development of this co-culture system will allow imaging-based dissection of these interactions. 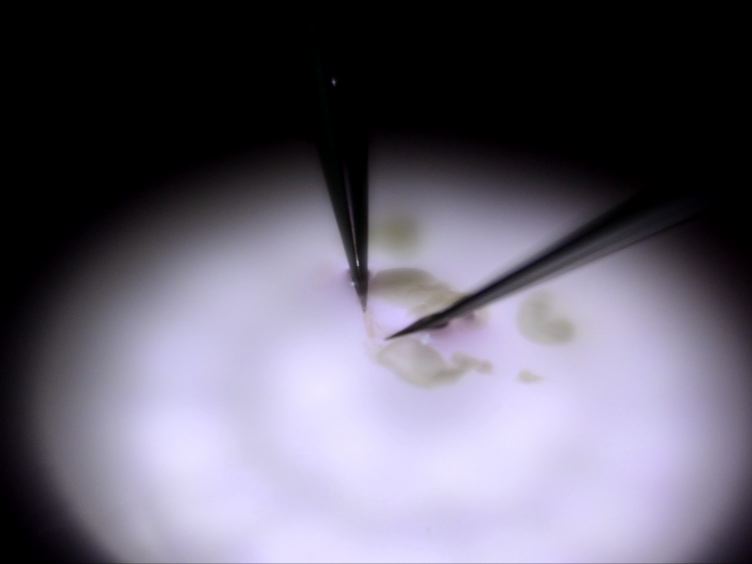