Vitamin A is essential for vision and the growth/differentiation of almost all human organs. Plasma retinol binding protein (RBP) is the principle and specific carrier of vitamin A in the blood. Here we describe an optimized technique to produce and purify holo-RBP and two real-time monitoring techniques to study the transport of vitamin A by the high-affinity RBP receptor STRA6. The first technique makes it possible to produce a large quantity of high quality holo-RBP (100%-loaded with retinol) for vitamin A transport assays. High quality RBP is essential for functional assays because misfolded RBP releases vitamin A readily and bacterial contamination in RBP preparation can cause artifacts. Real-time monitoring techniques like electrophysiology have made critical contributions to the studies of membrane transport. The RBP receptor-mediated retinol transport has not been analyzed in real time until recently. The second technique described here is the real-time analysis of STRA6-catalyzed retinol release or loading. The third technique is real-time analysis of STRA6-catalyzed retinol transport from holo-RBP to cellular retinol binding protein I (CRBP-I). These techniques provide high sensitivity and resolution in revealing RBP receptor's vitamin A uptake mechanism.

The recent identification of RBP receptor as a multitransmembrane domain protein called STRA636 and its function in vitamin A uptake from holo-RBP 36-43 strongly argues against the hypothesis that RBP does not need a receptor to deliver vitamin A. Detailed analyses revealed that STRA6 has 9 transmembrane domains with the N-terminus located extracellularly and C-terminus located intracellularly 40. Located between transmembrane 6 and 7 is an essential RBP binding domain 39. STRA6 is coupled to both LRAT and CRBP-I in vitamin A uptake from holo-RBP, but neither LRAT nor CRBP-I is absolutely required for enhanced STRA6 activity 41. STRA6's ability to catalyze retinol release from holo-RBP is the key to its vitamin A uptake activity 41. By relying on STRA6 to release its retinol, vitamin A delivery by RBP can transport vitamin A to target cells in peripheral tissues with high specificity and efficiency.

The critical importance of holo-RBP definition and preparation is illustrated not only by the historical debate on the existence of the RBP receptor, but also by three related recent papers based on holo-RBP definitions different from the original and correct definition 44-46. The first paper used the holo-RBP definition that was used to disapprove the existence of the RBP receptor to study the RBP receptor 44. The second and third papers came up with a third definition of holo-RBP that made it even less likely for retinol to be studied to form a proper complex with RBP 45,46. These studies prepared 3H-retinol/RBP by mixing holo-RBP (not even apo-RBP) with 3H-retinol. Since this assay did not have 3H-retinol/RBP formed and did not remove excessive free 3H-retinol 45,46, it is not an assay for 3H-retinol uptake from 3H-retinol/RBP, but is a free 3H-retinol diffusion assay. It has been shown previously that STRA6 does not enhance cellular uptake of free retinol by LRAT 38 or CRBP-I 41. Virtually all retinol is bound to RBP in the blood and there is no detectable free retinol. A main function of the RBP receptor is to catalyze retinol release from holo-RBP during retinol uptake from holo-RBP 41. If the retinol is artificially released or is in the free form to begin with 45,46, the RBP receptor is not needed. The dramatically different results obtained from the free retinol diffusion assay as compared to assays based on correctly prepared holo-RBP illustrate that correct preparation of RBP is crucial for its functional assays.

RBP can be purified from human serum 41, but the procedure is complex and the yield is low. An alternative approach is to produce RBP in E. coli. Because E. coli does not have the ability to correctly fold mammalian secreted proteins with more than one pair of disulfide bonds like RBP, it is essential to refold RBP and purify the correctly folded protein. Misfolded proteins not only behave differently from corrected folded RBP in various assays, but also cause protein aggregation during storage. For the same reason, apo-RBP is only produced from high-quality holo-RBP. We describe here an optimized protocol to produce high quality RBP 100% loaded with retinol through bacterial expression, refolding, and HPLC purification. HPLC purification not only removes incorrectly folded RBP but also significant bacterial contamination that can cause serious artifacts if RBP is used in signal transduction assays. We also describe two sensitive real-time monitoring techniques to study retinol transport by STRA6. Both techniques depend on high quality RBP. Due to space limitations, the classic techniques of radioactive retinoid-based and HPLC-based vitamin A uptake assays are not described here.

Without refolding, RBP produced in bacteria is almost completely misfolded due to the presence of many incorrect disulfide bonds. Therefore, refolding in the presence of the ligand retinol is critically important in obtaining well-folded RBP. We found that if the refolding reaction is not done correctly, misfolded RBP species (e.g. misfolded RBP-I in Figure 1) can predominate the whole preparation and the yield of high quality holo-RBP can be very low after HPLC purification. Therefore, HPLC cannot correct the problem of poor refolding. As shown in Figure 1, even with the correct refolding reaction, RBP contains many species of proteins including apo-RBP, partially misfolded RBP, and correctly folded holo-RBP. Only HPLC purification can separate the perfectly folded RBP that is 100% loaded with retinol from misfolded RBP species. The most reliable criterion for correctly folded and 100% loaded holo-RBP is that the retinol peak of the purified protein is slightly higher than the protein peak. Partially misfolded RBP, even after HPLC purification, has a retinol peak that is significantly lower than the protein peak (Figure 1). Although partially misfolded RBP still binds retinol, the retinol/RBP complex is much less stable, and RBP more readily releases bound retinol. Misfolded RBP can lead to incorrect conclusions from RBP or vitamin A-related experiments. Another difference between correctly folded RBP and misfolded RBP is that correctly folded holo-RBP is stable for years at 4 °C in PBS. If the holo-RBP preparation has misfolded RBP contamination, insoluble materials will emerge after a period of storage. Insoluble materials can be observed after spinning down the solution at high speed at 4 °C. Apo-RBP is only produced from high-quality holo-RBP. 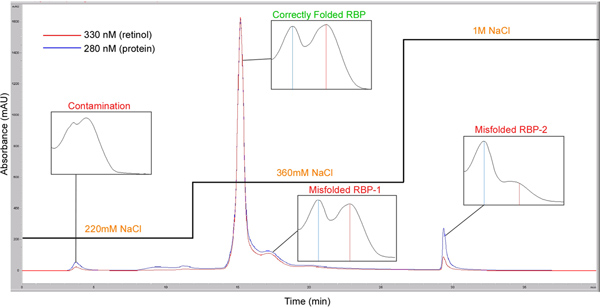 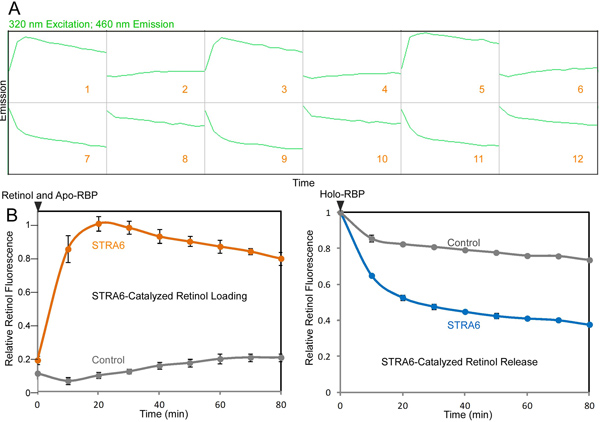 Figure 3. Real-time monitoring of STRA6-catalyzed retinol transport from holo-RBP to CRBP-I. A. An example of the raw data file that monitors the FRET between retinol and EGFP as shown on the Omega Data Analysis software. At 0 min, holo-RBP is added to the reactions containing STRA6 membrane (reactions 1, 3, and 5) or control membrane with EGFP-CRBP-I to initiate the reactions (reactions 2, 4, and 6). Simultaneous duel emission measurements for excitation at 320 nm revealed the green trace as the 460-10 emission time course and the blue trace as the 510-10 emission time course. B. The final calculated FRET signals for reactions shown in A. The FRET signals were calculated according to the methods in step 3.6. Click here to view larger figure.

We share here an optimized RBP production protocol because RBP production and purification procedures are critical to generating correctly folded RBP. Given the possibility of misfolded RBP species and the presence of trace amounts of bacterial proteins even in HPLC purified bacteria-produced RBP, it is helpful to use native RBP from serum to confirm a conclusion related to RBP. Urine RBP, which is commercially available, is a complex mixture of many species of RBP including apo-RBP and holo-RBP 48,49.

The real-time monitoring techniques described here are based on the intrinsic fluorescence of retinol. The original impetus to develop these assays was that we were limited by the information that can be revealed by the classic radioactive assays and HPLC-based assays. For example, we found that STRA6 has little vitamin A uptake activity by itself in vitamin A uptake assays, but we cannot easily explain the low activity of STRA6 in vitamin A uptake without LRAT or CRBP-I41. In retinyl ester-based assays, it is easy to understand that STRA6 by itself does not make retinyl ester because STRA6 is not an enzyme that has LRAT activity. However, even in retinol-based assays, STRA6 still has little activity by itself. Does STRA6 have any vitamin A uptake activity at all? If it does not, how can CRBP-I or LRAT accelerate its activity? If it does, why does it need CRBP-I or LRAT? Although radioactive assays and HPLC-based assays did not answer these questions, we reasoned that STRA6 should have the ability to release retinol from RBP. We also reasoned that a retinol fluorescence assay might reveal this activity. Retinol fluorescence measurement has made it possible to study the movement of free retinol in vertebrate photoreceptor cells after light bleaching of visual pigments in real time 50,51. How can RBP receptor activity be monitored by measuring retinol fluorescence? It was discovered in early 1970s by two research groups that retinol has dramatically enhanced fluorescence when bound to RBP 52,53. We found that STRA6-catalyzed retinol release from holo-RBP causes a decrease in retinol fluorescence, while STRA6-catalyzed retinol loading into apo-RBP causes an increase in retinol fluorescence. Although radioactive assays and HPLC-based assays have been used extensively to study vitamin A uptake, fluorescence assays had not been used to study the RBP receptor activity until recently, likely because the endogenous membranes used as the source of the receptor have very high background fluorescence and have a complex mixture of retinoid binding proteins/enzymes that makes it difficult to interpret the contribution of each protein. The currently available sensitive instruments are also what make these techniques more feasible. In addition to direct fluorescence measurement, the new retinol-EGFP FRET pair41 coupled with simultaneous duel emission optics makes it possible to study retinol transport to retinol binding proteins in real time and in multiple reactions simultaneously. 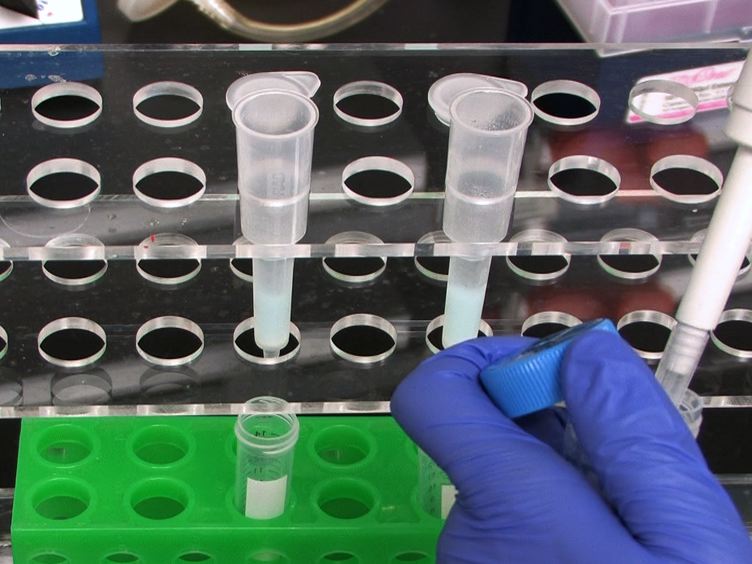