Chronic ocular hypertension is induced using laser photocoagulation of the trabecular meshwork in mouse eyes. The intraocular pressure (IOP) is elevated for several months after laser treatment. The decrease of visual acuity and contrast sensitivity of experimental animals are monitored using the optomotor test.

Glaucoma, frequently associated with elevated intraocular pressure (IOP), is one of the leading causes of blindness. We sought to establish a mouse model of ocular hypertension to mimic human high-tension glaucoma. Here laser illumination is applied to the corneal limbus to photocoagulate the aqueous outflow, inducing angle closure. The changes of IOP are monitored using a rebound tonometer before and after the laser treatment. An optomotor behavioral test is used to measure corresponding changes in visual capacity. The representative result from one mouse which developed sustained IOP elevation after laser illumination is shown. A decreased visual acuity and contrast sensitivity is observed in this ocular hypertensive mouse. Together, our study introduces a valuable model system to investigate neuronal degeneration and the underlying molecular mechanisms in glaucomatous mice.

The procedure of laser photocoagulation is modified from previously published protocols 5-7.

As described in the Procedures, laser illumination is aimed at the trabecular meshwork in the limbal region to photocoagulate the aqueous outflow, inducing angle closure (Figure 1). Most lasered eyes exhibited no significant physical damage, pigment detachment or infection, consistent with previous findings 6. When a small group of mice (less than 5% of all lasered animals) exhibited physical signs of severe damage such as deflated eye balls, severe cataract, significant pigment detachment, or bleeding, we euthanized them immediately. Around 30% of lasered eyes developed minor corneal scars, and most of them recovered within 1-2 weeks after laser treatment.

We found elevated IOP in nearly every laser-treated eyes from more than one hundred mice. The IOP of experimental animals is monitored using a rebound tonometer (Figure 2). Figure 2B shows one example of the changes of IOP before and after the laser treatment. Before laser treatment, the IOP baselines of the two eyes of the mouse showed no difference: 15.7 mmHg (right) vs. 14.7 mmHg (left, Day 0, Figure 2B). Seven days after laser-treatment, the IOP of the treated (right) eye increased almost 2-fold to 30.7 mmHg, compared to the untreated eye (15.7 mmHg). The IOP of laser-treated eye remained elevated at 26-28 mmHg for about 4 months: at 4 months after treatment, the mean IOP of treated eye was 26 mmHg, significantly higher than that of untreated left eye (16.3 mmHg). Subsequently, the IOP of the treated eye slowly decreased and reached 18.7 mmHg at 6 months (24 weeks) after treatment (untreated eye: 15.3 mmHg). Our data demonstrate that sustained IOP elevation is achieved for more than 4 months. 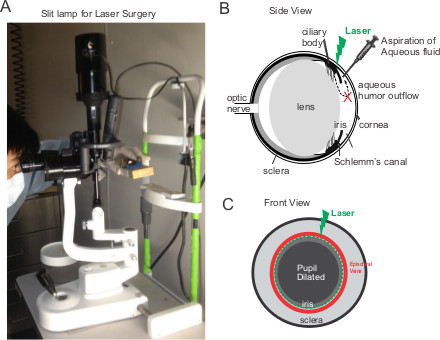 Figure 1. Laser photocoagulation of the aqueous humor outflow in mouse eyes. (A) A photo of the slit lamp for laser treatment. The operator holds the mouse with restrainer and then aligns the right eye of the mouse to the light source of the slit lamp. (B-C) Schematic side-view and front-view of the eye. The operator holds the mouse restrainers with both hands while 80-100 laser spots are applied to the area between the episcleral veins and the dilated pupil. 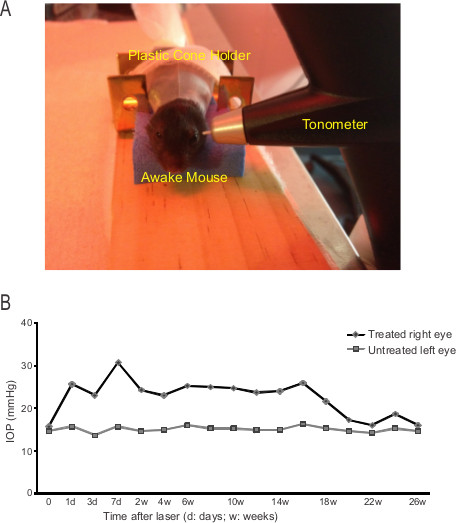 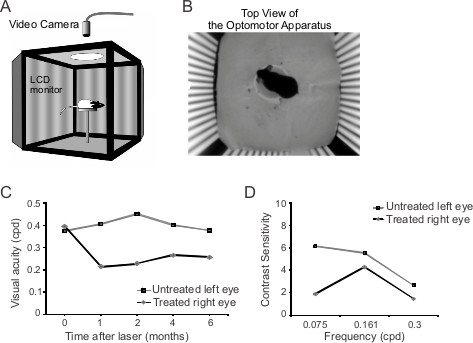 We report above that sustained ocular hypertension can be induced by laser illumination in mouse eyes. Compared to the saline injection model 18 and the vein cautery model 11 both of which require extensive microsurgical skills, the laser illumination is relatively simple and easy to perform. Usually we can perform the laser illumination for 4-6 mice in 2-3 hr. The critical steps to achieve sustained IOP elevation are the anterior chamber flattening before laser and the parameters for laser illumination. Draining out the fluid in the anterior chamber facilitated to target the laser to the trabecular meshwork area and minimize injury to nearby ciliary body and blood vessels 6. Different types of laser have also been reported; for example, some studies used a diode laser with wavelength of 532 nm 5,6 and others used 810 nm energy pulses 7 to target the trabecular meshwork and episcleral veins in the limbal region. In order to maximize the angle damage, we have increased the number of laser spots compared to the previously reported laser models 5-7. With our experimental setup, almost every laser-treated mouse had more than 50% increase of IOP by the first week after laser treatment, among which about 60% had elevated IOP for more than 2 months. By contrast, one intraocular injection of microbeads into mouse eyes can elicit an ~30% elevation in IOP for a couple weeks 8 (another study suggested a longer effect of IOP elevation 9,10), and the occlusion of limbal and episcleral veins in albino CD-1 mice only induced an acute IOP elevation for a few days 13.

The accurate measurement of IOP is important in determining the laser effects on mouse eyes. Anesthesia significantly altered the IOP measurement and behavioral training of mice reduced IOP variation in awake animals 9,19. Here, the experimental animals were given a few minutes to rest and adapt to the restrained position before measurement in order to get consistent readings of IOP. To confirm the IOP measurement is reliable and not dependent on the person who performed the test, the same animals were examined by two or three different testers and their differences of IOP readings are generally within 5-15%.

Because of the variability of the duration and degree of IOP elevation, different RGC loss has been reported in different animal models. For example, a 20% loss of axons has been observed in mouse eyes with microbeads injection 8. Around 20% of RGCs died in rat eyes at six weeks after laser illumination at the trabecular meshwork, while around 60% of RGCs died with laser illumination at both the trabecular meshwork and the episcleral veins 5. Our data showed a 20-30% of RGC loss at 2 months after laser treatment in mouse eyes. Nevertheless, all these different animal models of chronic ocular hypertension without significant inflammation or damage to other parts of the eyes provide us the potential to measure the long-term effects of ocular hypertension on retinal structure and visual function over time.

Taking advantage of the non-invasive nature of the visual behavioral assay that allows serial tests as a function of changing conditions, the changes of visual acuity and contrast sensitivity can be monitored for months after the induction of ocular hypertension. The optomotor test provides a rapid assessment of visual function; moreover, the two eyes can be tested separately, which greatly facilitates our experiments because one eye of the target mouse is laser-treated and the other is left intact as the control. At the same time, it is noted that the optomotor reflex sometimes is difficult to use due to the high activity and wandering attention of some mice 12.

Combined with the power of mouse genetics, our model provides a superb readout with which to investigate the pathological mechanisms in high-tension glaucoma. For example, using Thy-1-YFP transgenic mice, which has a small number of RGCs labeled 10,20-22, the dendritic structural changes of individual RGCs can be imaged in eyes with sustained ocular hypertension. We have demonstrated that the dendritic degeneration of RGCs depends on location and subtypes in ocular hypertensive eyes 23. Cell apoptosis or neuroprotective signaling pathways can be further manipulated in vivo to identify the underlying molecular mechanisms of RGC degeneration and survival in glaucoma.

The authors are full-time employees of Northwestern University.

The authors received NO funding that was provided by companies which produce reagents and instruments used in this article.

The work contained in this paper has been supported by the Dr. Douglas H. Johnson Award for Glaucoma Research from the American Health Assistance Foundation (XL), the William & Mary Greve Special Scholar Award from the Research to Prevent Blindness (XL), the Illinois Society for the Prevention of Blindness (HC) and NIH grant R01EY019034 (XL). 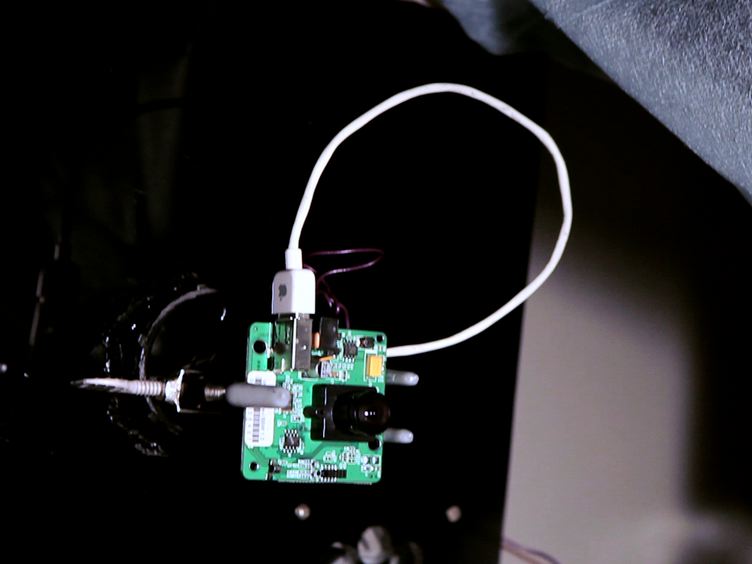