During the development of oral pharmaceutical dosage forms such as tablets and capsules there is a strong emphasis on dissolution testing. Oral dosage forms are required to dissolve before they can be absorbed for therapeutic efficacy. Poorly soluble drugs generally have issues reaching an adequate concentration which makes dissolution testing particularly important1. Pharmacopoeial dissolution methods are most commonly used for dissolution analysis. In most cases this requires preparing the drug as a tablet or capsule which is then placed into a beaker of flowing dissolution medium. The dissolved drug concentration is then determined by analyzing samples of the dissolution medium using a standard spectroscopic technique such as UV absorption spectroscopy2. These traditional pharmaceutical dissolution methods do not provide any direct analysis of the sample or any changes that might be occurring on the dissolving surface of the dosage form. Direct analysis of the sample during dissolution can provide more information about the dissolving dosage form and potentially identify problems causing dissolution test failure.

Direct analysis of dissolving dosage forms requires the use of in situ analytical techniques which are capable of monitoring the dissolution process. To record in situ during dissolution the analytical technique must not be influenced by the presence of the dissolution medium and the technique needs a high temporal resolution to reliably measure changes to the dissolving dosage form in the order of seconds. Attenuated total reflectance UV spectroscopy has been shown to be suitable for measuring changes during dissolution but lacks spatial resolution provided by imaging techniques3. Traditional pharmaceutical imaging techniques such as scanning electron microscopy (SEM), and spontaneous Raman mapping both have limiting factors preventing their use in situ for dissolution.

SEM imaging is a high-resolution rapid imaging technique capable of imaging the surface of pharmaceutical dosage forms. However, SEM imaging is generally performed under vacuum conditions and requires sample coating making it unsuitable for in situ dissolution imaging. Fiber-coupled spontaneous Raman spectroscopy combined with a flow through cell and UV flow-through absorption spectroscopy, has been performed to monitor various drug systems in situ during dissolution, including theophylline4, carbamazepine, and indomethacin5. Raman spectroscopy was capable of identifying surface changes occurring during dissolution but it gave no spatial information about where the surface changes were occurring. Spontaneous Raman mapping uses Raman spectra and provides spatial information about the surface of the sample but imaging takes on the order of minutes to hours depending on image area, making it unsuitable for in situ dissolution imaging.

Coherent anti-Stokes Raman scattering (CARS) microscopy is a rapid imaging technique and combined with inline UV absorption spectroscopy, it has allowed us to develop a technique capable of in situ dissolution analysis. CARS microscopy provides rapid chemically selective imaging which is not influenced by the presence of dissolution medium making it a suitable technique for in situ dissolution analysis. CARS techniques are divided roughly into two groups based on the pulse duration of the lasers; one being narrowband CARS (picosecond pulsed lasers), and the other being broadband CARS (femtosecond pulsed lasers). A typical CARS microscope system consists of two pulsed laser sources and an inverted microscope. To produce a CARS signal, one of the pulsed lasers needs to be tunable so there is a frequency difference between the two lasers which matches a Raman vibration. Additionally, the two lasers are required to overlap in space (spatial) and time (temporal), with pulses from both lasers arriving at the same area of the sample at the same time. As Raman vibrations are chemically specific and CARS signal is only generated within the focal volume of the microscope, CARS microscopy is capable of chemically selective imaging with a resolution down to the diffraction limit.

Narrowband CARS microscopy has been used to image drug release from some pharmaceutical systems. In the area of pharmaceutical formulations, Kang et al.8-10 imaged drug loaded polymer films. Initially they imaged the distribution of the loaded drug, which was followed by imaging of the drug release from a static dissolution medium. Jurna et al.11 and Windbergs et al.12 went a step further and imaged firstly the theophylline distribution in lipid dosage forms followed by imaging the drug dissolution using a dynamic dissolution medium. 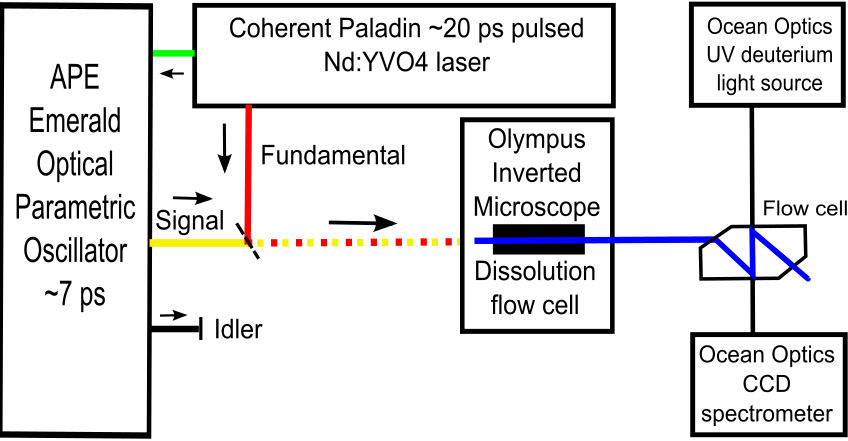 Figure 1. Schematic illustrating the CARS microscope setup with the intrinsic flow through dissolution setup. This figure has been modified from Fussell et al13. 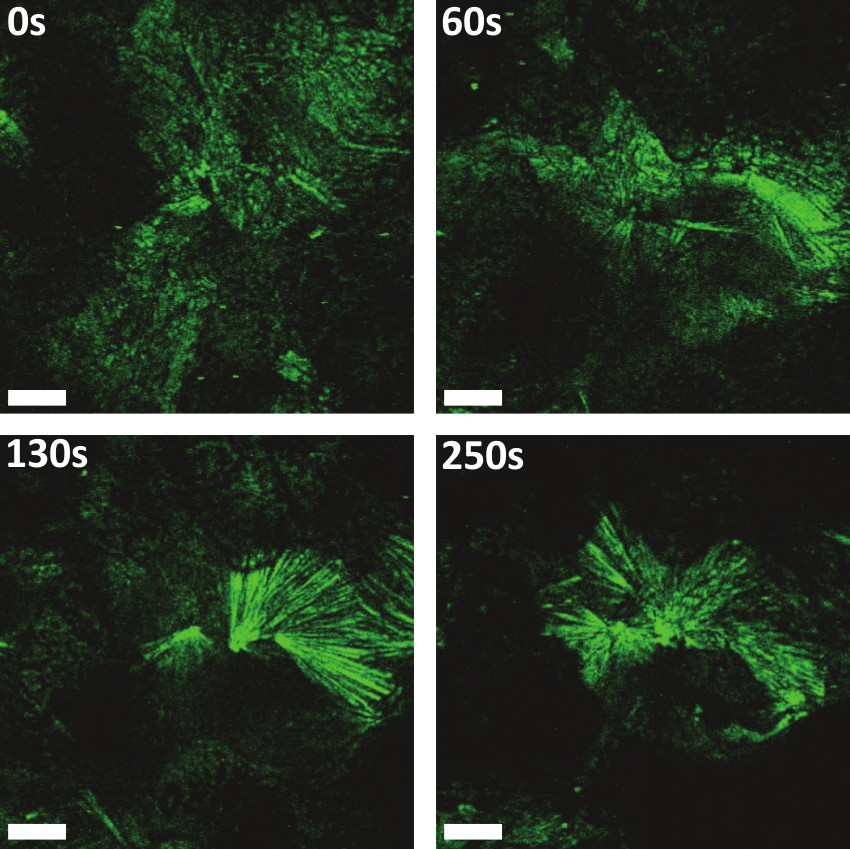 Figure 2. Frames from CARS dissolution video. Selected CARS images (2,960 cm-1) from a dissolution video for a theophylline anhydrate with ethyl cellulose tablet. The 0 sec image is recorded at one area of the sample while the 60, 130, and 250 sec images are recorded at another area of the sample. The CARS video is available as supplementary information. Scale bar is 50 µm. 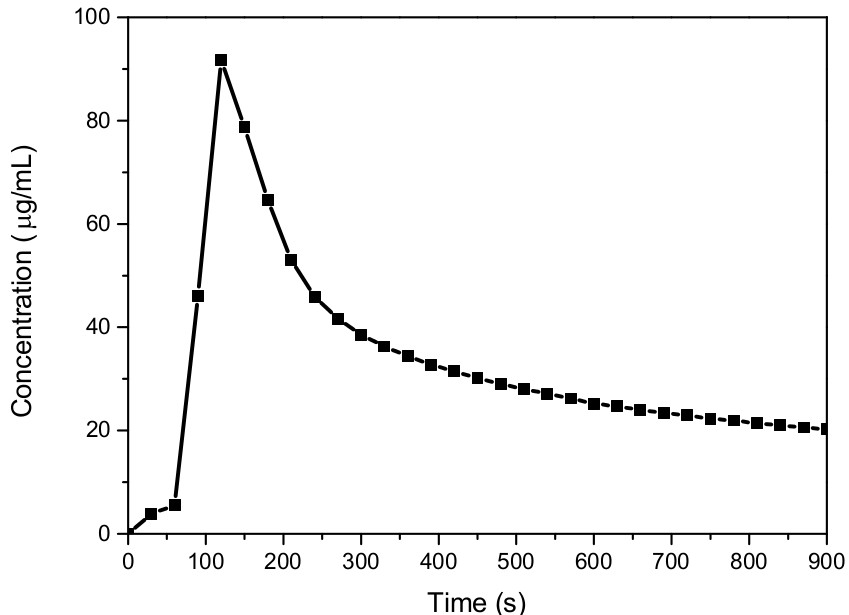 When performing CARS microscopic dissolution experiments there are a few critical aspects that need to be monitored during the experiment. Firstly, introducing the dissolution medium to the CARS flow cell causes the focus to move. This means that the image is immediately lost and it takes a few microns of objective adjustment to find the surface again. Secondly, there is risk of liquid leakage from the CARS flow cell if the glass cover breaks during the experiment. This can potentially cause liquid damage to the optics, so it is important to listen for any cracking sound that could mean the glass has broken. Finally, there is also a small chance that the piping can become blocked due to particulate matter in the system during the experiment, this can be seen as a sudden unusual change in the UV spectra and also through periodically checking the flow during the experiment.

Particulate blockage of the piping is mainly an issue with tablets that have been designed to disintegrate during dissolution. This is one of the limitations for this technique as this system requires the surface of the tablet to remain intact throughout the dissolution to allow imaging. In addition to disintegrating tablets, it is currently not possible to image tablets that are designed to swell during dissolution as this can lead to breakage of the CARS flow cell.

Imaging tablets during dissolution provides a greater understanding of what is occurring on the surface of a dissolving tablet. Conventional pharmaceutical dissolution methods focus only on the drug content dissolved in the dissolution medium which can identify whether the tablet passes or fails the required standard. However, in the case of a failed test it is difficult to determine what caused the failure. The case of a failed dissolution test is potentially where in situ dissolution analysis using CARS microscopy can provide answers.

In conclusion, this work shows that CARS microscopy is capable of rapid chemically specific imaging based on Raman vibrational frequencies allowing selective imaging of the drug in a tablet containing both drug and excipient. Additionally, CARS microscopy combined with inline UV absorption spectroscopy is a powerful tool capable of monitoring the surface of tablets undergoing dissolution and correlating surface changes seen using CARS with changes in dissolution rate.

AF is supported by the Dutch Technology Foundation STW, which is the applied science division of NWO, and the Technology Programme of the Ministry of Economic Affairs. (STW OTP 11114). 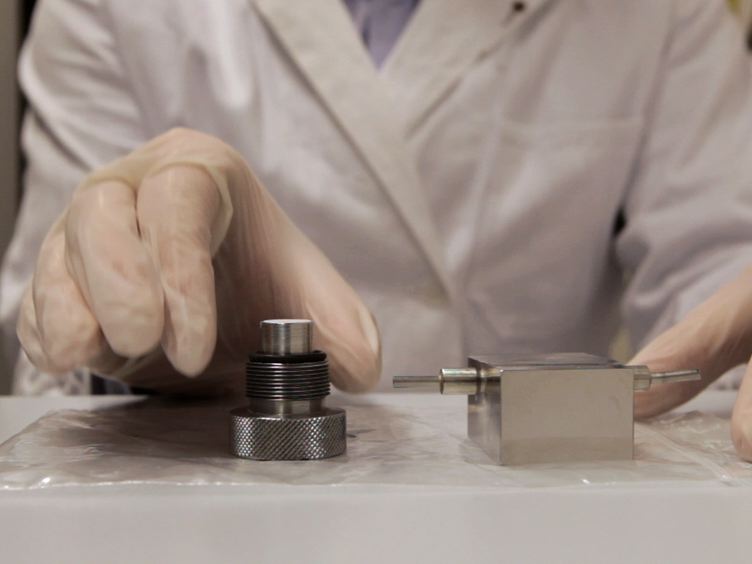