In the following protocol, we describe a very simple way to isolate Neutrophil Extracellular traps (NETs) from human whole blood using readily available reagents. We then demonstrate how the isolated NETs can be used in an in vitro adhesion assay with cancer cells.

Neutrophil Extracellular Traps (NETs) have been recently identified as part of the neutrophil’s antimicrobial armamentarium. Apart from their role in fighting infections, recent research has demonstrated that they may be involved in many other disease processes, including cancer progression. Isolating purified NETs is a crucial element to allow the study of these functions.

In this video, we demonstrate a simplified method of cell free NET isolation from human whole blood using readily available reagents. Isolated NETs can then be used for immunofluorescence staining, blotting or various functional assays. This enables an assessment of their biologic properties in the absence of the potential confounding effects of neutrophils themselves.

We then demonstrate how isolated NETs can be used in an adhesion assay with A549 human lung cancer cells. The NET stock is used to coat the wells of a 96 well cell culture plate O/N, and after ensuring an adequate NET monolayer formation on the bottom of the wells, CFSE labeled A549 cells are added. Adherent cells are quantified using a Nikon TE300 fluorescent microscope. In some wells, 1000U DNAse1 is added 10 min before counting to degrade NETs

Neutrophil extracellular traps (NETs) are newly discovered neutrophil-derived elements composed of strands of extracellular DNA decorated by hundreds of proteins and histones. They are secreted by neutrophils in the context of infection and inflammation following specific stimuli and they were initially recognized to be part of the neutrophil’s defense mechanisms against infections. They were first shown to promote trapping of various microbial invaders including bacteria, viruses and fungi 1-3. Trapping of the microbe would then lead to its destruction both directly by NET-associated proteins 3,4 and indirectly through local recruitment of phagocytic cells 5,6. The role of NETs however does not seem to be limited to host defense. More recently, they have been shown to play an important role in autoimmune diseases 7,8, thrombosis 9, pregnancy-related disorders 10 and even cancer progression 11,12. Accordingly, it appears that NETs play an important role in a large number of diverse physiologic processes. However, given the novel nature of such research, much remains to be elucidated with respect to the mechanisms by which NETs exert their effects. Herein, we present a simplified method for the isolation of NETs in the absence of neutrophils.

In the following video, we demonstrate a simplified and easy technique to isolate NETs from human whole blood. Cell-free NETs can then be used in a number of in vitro experiments including staining, imuunofluorescence, blotting as well as a number of assays such as adhesion, proliferation and migration. Other protocols exist 13, 19, however they are usually lengthy, complex, expensive, and often, low yield 13. This simplified protocol uses basic reagents and decreases the number of steps required to isolate neutrophils, therefore minimizing the length of the procedure while maximizing yield.

The following method combines different techniques for neutrophil isolation previously described in the literature to obtain a simple protocol yielding a very pure sample of live neutrophils. As suggested in the literature, venous blood is collected in EDTA tubes and used within 10 min to avoid neutrophil activation 14. We use Lymphocyte Separation Media (LSM) density gradient centrifugation to isolate granulocytes and red blood cells from heparinized whole blood, a method adapted from the Ficoll density centrifugation technique initially described by Boyum et al 15. LSM is a modification of the Boyum formulation that substitutes sodium diatrizoate for the sodium metrizoate and has been used successfully in many studies to isolate neutrophils 16-18.

Following differential density centrifugation, monocytes and lymphocytes are discarded; red blood cells are then sedimented using a 6% Dextran solution 14 and the remaining RBCs are lysed to obtain a population of pure neutrophils, which is verified with Trypan blue and Methylene blue staining.

Numerous agents have been used to induce NETosis both in vitro and in vivo, including lipopolysaccharide (LPS), and phorbol myristate acetate (PMA) and interleukins (IL-8) 3,5,6. In the following protocol, isolated neutrophils are stimulated with 500 nM PMA for 4 hr, which has been shown to be an adequate concentration to allow consistent and reliable NET formation without promoting apoptosis 19,20.

After isolation, we demonstrate how cell-free NETs obtained from this protocol can be used in an adhesion assay. DNAse1 is used to digest and degrade NETs as previously described and thus serves as a control 2,3,11. Other options include the use of Neutrophil elastase inhibitor (NEi) to inhibit NET formation, which is an acceptable alternative when the goal is to inhibit the NET formation rather than effect their degradation 11. Although NEi has a number of varied functions, it has been previously shown that NET deposition can be inhibited by NEi through blockage of chromatin decondensation, nuclear degranulation and neutrophil death 12

NOTE: All experiments were conducted in accordance with local institutional ethical guidelines.

Successful achievement of a static adhesion assay with NETs requires adequate coating of the wells with a monolayer of NETs before the addition of cancer cells (Figure 1). All subsequent steps must be done with care not to disrupt that layer. When an adequate layer of NETs is formed, it is expected to see significant cancer cells adhesion to NETs as seen in Figure 2A and 2C. This effect is abrogated by the addition of DNAse1, which degrades NETs as seen in Figures 2B and 2D. Conversely, there should be no significant decrease in A549 adhesion to NETs in the presence of the vehicle control (Figure 3). To obtain a good estimation of mean cancer cell adhesion per high power field (hpf), it is recommended to count at least 4 random hpfs per well. Fields that are not well coated in NETs due to technical issues should not be taken into consideration for counting as these might falsify results.

Figure 1. NET Monolayer. Light microscopy images of the 96 wells plate wells coated with NETs showing (A) uniform monolayer of NETs throughout well as opposed to (B) inadequate coating of the well with an interrupted layer of NETs. Scale bars represent 40 μm. Please click here to view a larger version of this figure. 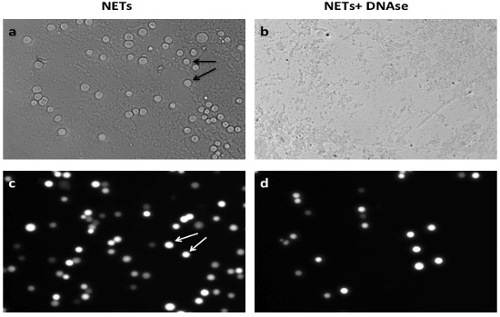 Figure 2. A549 Cancer Cell Adhesion to NETs In Vitro. (A) A549 cancer cells (arrows) adhere to monolayer of NETs in vitro. (B) Addition of DNAse1 decreases significantly the level of cancer cell adhesion; (C) shows a representative image of cancer cell adhesion on NETs under fluorescent light under fluorescent microscopy (Nikon TE300) before (C) and after (D) addition of DNAse1. Scale bars represent 40 μm. Please click here to view a larger version of this figure. 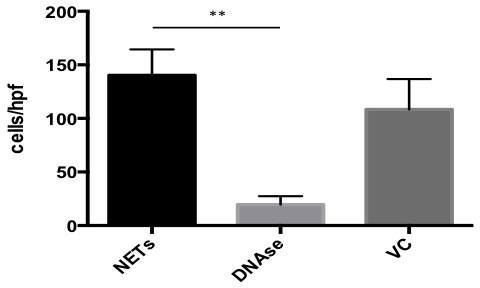 Figure 3. Results for In Vitro Adhesion Assay. GraphPad software was used to plot and analyze results from the A549 cancer cell adhesion assay to NETs. In the presence of DNAse, adhesion was 13.90% compared to untreated NETs. In the presence of vehicle control (VC), adhesion was 77.26% compared to untreated NETs. Data is presented as mean +/- SEM. Significance was determined using Kruskall Wallis test with **p<0.001.

The Neutrophil Extracellular Trap isolation protocol demonstrated in this video combines different techniques used in the literature for neutrophil isolation and NET formation. It simplifies a fairly complex and variable process and offers a very reliable and replicable way to isolate purified cell-free NETs with fewer steps than other protocols. Furthermore, readily available reagents are employed adding to the protocols simplicity and significantly reducing its cost. The application of NETs towards a static adhesion assay serves to demonstrate the flexibility afforded by this isolation technique, as NET concentration can easily be manipulated to suit a particular goal (17). Accordingly, NETs isolated by the demonstrated technique can be used for various types of assays including dynamic adhesion assays, migration assays, proliferation assays immunofluorescence and confocal imaging, electron microscopy, flow cytometry as well as traditional Western blotting.

There are a number of steps in this protocol that are critical for its success. First, neutrophils may be accidentally activated during the process of isolation leading to apoptosis. It is therefore important to perform all isolation steps under sterile conditions under the fume hood, avoid aggressive mixing of tubes, keep all samples on ice after the RBC lysis step, and avoid long wait times between steps. Second, if the goal of the assay is to coat wells for the purpose of assessing adhesion, it is important to respect the suggested NET concentration per well as well as the proposed final DNA concentration in the “NET stock” as this will ensure an even and consistent monolayer of NETs. Lower concentration may produce only patchy coating of the well and therefore less reliable results. Finally, it is also important to handle the NET monolayer very carefully while performing the assay to prevent its disruption. This can be facilitated by adjusting the intensity of the suction and pipetting on the sides of the wells.

The authors would like to acknowledge Dr. Paul Kubes for his guidance and mentoring that were central in the construction of this work. 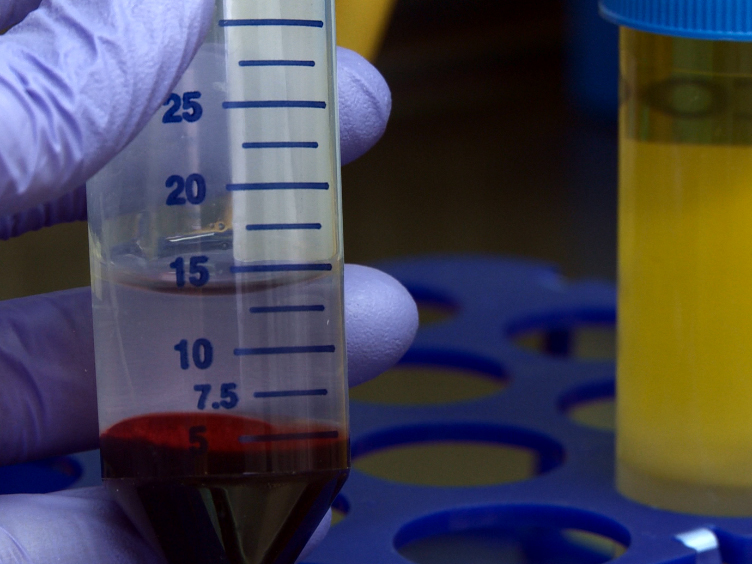