Tools used for visualizing vascular regeneration require methods for contrasting the vascular trees. This film demonstrated a delicate injection technique used to achieve optimal contrasting of the vascular trees and illustrate the potential benefits resulting from a detailed analysis of the resulting specimen using µCT and histological serial sections.

To visualize the hepatic vascular system, which requires contrasting the vascular trees, mice were injected with a radiopaque silicone rubber contrast agent directly into the portal or hepatic venous vascular tree. After polymerization of the silicone and explantation of the organ, the liver samples were subjected to µCT scanning using a CT scanner. The scans resulted in voxel image representations of the silicone-injection specimens9.

For quality control, the vascular system was first visualized in 3D using preclinical software. Segmentation was performed by setting a threshold between the soft tissue intensity and the vessel intensity. The resulting vessel mask was visualized using surface rendering. The software also allowed for manual determination of two parameters of vascular growth: maximal vessel length and radius.

A preclinical software was then used for 3D reconstruction of vascular trees and subsequent calculation of the supplying or draining vascular territories13. In addition, this software automatically determined certain parameters of vascular growth, such as the total length of all visible vascular structures also known as the total edge length or total vessel volume.

The silicone perfusion procedure was performed in naive mice and in mice that underwent 70% partial hepatectomy (PH). Livers were collected at different observation time points after resection for analyzing vascular and parenchymal liver regeneration using the aforementioned visualization and quantification technique.

The main goals of this film are to: (1) demonstrate the delicate injection-technique required to achieve optimal contrasting and (2) show the potential benefit resulting from a detailed analysis of the resulting specimen using µCT and histological serial sections. After watching this film, the reader should have a better understanding of how to inject silicone compound into a specific vascular system and of the usefulness and applicability of the technique.

To scan the explanted liver sample using µCT, the following steps are needed.

The quality of silicone injection can be judged with the naked eye during the procedure. The small vessels on liver surface fill gradually with the blue compound. If the normal vascular structure was observed on the liver surface, the silicone rubber injection quality was good. If the perfusion volume was insufficient, the small vessels on the liver surface were not fully filled. In contrast, over filling caused vascular rupture as indicated by irregular blue spots on the surface of the organ. Both are causing difficulties upon 3D-reconstruction ultimately rendering a procedure a failure.

For better evaluation of the injection quality, µCT scanning followed by 3D vascular reconstruction using preclinical software was performed. Injection was determined to be successful when segmentation resulted in the visualization of an intact complete vascular tree without ruptured structures indicated by visible extravasation. If the vascular tree appeared incomplete (Fig. 1A), perfusion volume was insufficient. If more than one vascular tree appeared or extravasation was seen (Fig. 1B), perfusion volume or pressure was inadequate. This was the most likely reason for a failure. Perfusion pressure can theoretically vary slightly depending on the viscosity of the solution. Viscosity is dependent on the polymerization time elapsed between mixing the compound and injection into the vascular system. Since some manipulation is required for mixing and injection, time interval can slightly vary between 3 min to 5 min.

Since inadequate perfusion or hyperperfusion would cause failure of injection, standardizing the perfusion volume was considered. As reported2, 6% of the hepatic volume is occupied by blood and 44% of the blood in the liver resides in the large vessels (e.g., hepatic artery, portal vein). Liver volume in mice is about 1.3 ml11. Therefore, total vascular volume in portal venous system in normal mice was estimated to range between 0.03 ml and 0.04 ml. Flow rate was set to 0.2 ml/min and total perfusion time was set to approximately 1 minute resulting in a total injected volume of around 0.2 ml.

This seemingly high volume is needed, since the catheter system must be prefilled, which takes about 0.1-0.15 ml. An extra volume of 0.05 ml is needed to fill the proximal portal vein between liver hilum and the ligation of the catheter. Flow rate for hepatic vein injection was also set to 0.2 ml/min but total perfusion time was prolonged to 2 min, resulting in a higher total volume of about 0.4 ml. Total intrahepatic vascular volume was assumed to be similar to the total portal vein vascular volume. However, the volume needed to fill the intrahepatic vena cava between the infrahepatic ligation and the suprahepatic clamp was estimated with 0.2 ml.

A total of 49 animals were subjected to silicone injection: 22 animals into the PV system and 27 animals into the HV system. Our success rate of injection was 55% (12/22) in the PV group and 89% (24/27) in the HV group. Taking into account that the PV group was used to establish the silicone injection technique in the beginning (n=4), the success rate of injection for the PV system should effectively be higher than 55%. However, µCT images obtained from these injections were suitable for 3D reconstruction and quantitative analysis. Additionally, the vascular trees from either PV or HV of 36 mice could be reconstructed with the Imalytics Preclinical software.

A time resolved µCT series of murine liver samples after hepatectomy was subjected to a qualitative analysis. Parenchymal regeneration consisted of 3D growth of the remnant liver. Vascular regeneration was defined as tissue that displayed an increase in the length and diameter of the vascular stem, with its main branches and outgrowth of additional terminal branches, in both the portal venous and hepatic venous tree.

After CT-scanning the selected specimens were subjected to serial sectioning, yielding to up to 2000 slides, which were fully digitalized and used to reconstruct the portal as well as the hepatic venous tree12. This is the prerequisite for the future 3D visualization of molecular events during regeneration in respect to the growing vascular tree. 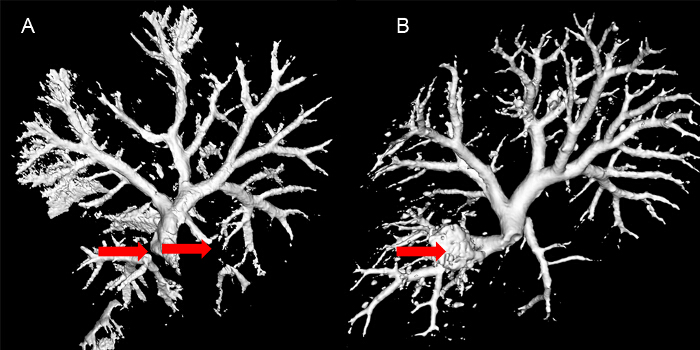 Figure 1. Monitoring the quality of silicone injection. A. Incomplete filling of right inferior portal vein (arrow in the left) and caudate portal vein (arrow in the right) were visualized in Imalytics Preclinical software as discontinuities of the vascular tree. This indicated an inadequate perfusion pressure or perfusion volume or the existence of air bubbles. B. Extravasation of right inferior portal vein was visualized which indicated disruption of a vessel due to inadequate pressure or hyperperfusion. Please click here to view a larger version of this figure. 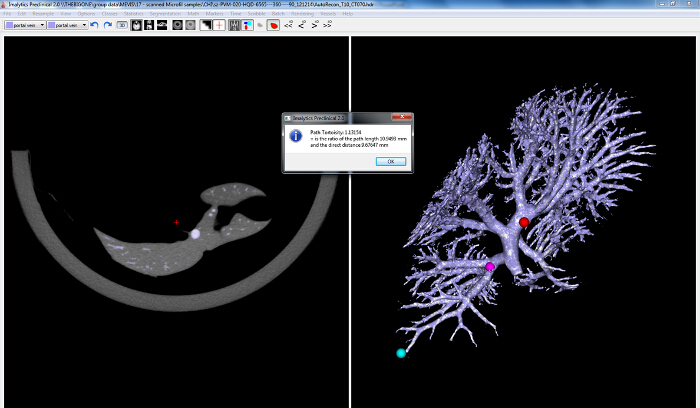 Figure 2. Measurement of maximal vessel length of right inferior portal vein. To determine the maximal vessel length, one start point and one end point were placed at the root and distal end of the right inferior portal vein (RIPV) of the vascular mask (blue and magenta ball markers) in preclinical software. The vascular path length of the RIPV (10.95 mm) was obtained as part of evaluating the "Path Tortuosity". Please click here to view a larger version of this figure.

Contrasting the vascular tree by silicone injection and µCT scanning has been introduced in tumor models and neurological disease models frequently to study the angiogenic progression5,7,8,10. Improvements in methodology of silicone injection were made in the present study for visualizing and quantifying vascular growth after partial hepatectomy in mice.

There are a number of critical steps needing attention to achieve good perfusion quality. First of all, systemic heparinization is highly recommended before flushing the liver with heparin or saline to avoid blood clotting inside the liver. Elimination of air bubbles from the tubing is also important to achieve good quality of silicone perfusion. The determination of perfusion rate and pressure should first be based on physiological hemodynamic parameters17. Perfusion time reflects the total injected volume and is estimated taking the expected intravascular volume and the prefilling volume of the catheter system into account.

Silicone is a highly viscous compound which differs from blood or saline. Therefore, several trials are needed for adjusting perfusion rate and pressure. Maintaining constant injection flow rate and pressure is necessary to prevent severe dilation or even rupture of small vessels. Perfusion time is set according to the estimated needed injection volume. However, perfusion should be stopped immediately when the blue compound becomes visible in vessels on the surface of the liver. Otherwise, the silicone can drain into sinusoids and into another vascular system which will interfere with later reconstruction and analysis.

Typically, silicone is perfused systematically via the left ventricle in most published reports 1,3,15. The left ventricle is easy to expose to enable free access to the injection site. However, the disadvantage is that this route is rather indirect because the contrast agent has to undergo circulation before reaching the site of interest. Therefore, the surgical procedure of silicone injection technique has been modified in this study. In contrast to the frequently selected indirect route of application performed by others, silicone compound was directly injected into the vascular system of interest, instead of contrasting the whole body. In this way, the velocity and volume of perfusion can be better controlled. The portal venous system and hepatic venous systems can be perfused and reconstructed separately for later individual analysis, as shown in the video.

The limitation of this modified procedure is the technical difficulty. It is challenging to successfully perform an intraportal injection using highly viscous compound in mice, because the vascular structure is so delicate. It is rather easy to destroy the vessels during the procedure. Thus, portal vein dissection and catheter insertion should be performed gently.

Contrasting of the vascular trees and subsequent µCT imaging of the explanted livers is a useful tool for visualizing and quantifying vascular regeneration after partial hepatectomy. Quantitative vascular parameters can be utilized for better understanding of the kinetic of vascular growth in the progression of liver regeneration. Furthermore,3D reconstruction of both hepatic vascular systems based on serial sections is technically feasible, albeit representing an enormous work load.

This technique can be applied in multiple models where visualization and quantification of vascular growth is important. Moreover, 3D visualization of molecular events in respect to the underlying vascular tree is at reach. Examples of molecular events of interest could be the detection of proliferation marker such as Ki-67 or markers of ischemic damage such as HMGB1. Assessing the spatially resolved molecular events in the vicinity of the regenerating vascular tree within the regenerating hepatic parenchyma is the prerequisite for advanced multi-scale systems biology modeling. This silicone injection technique is one experimental step towards reaching this goal. 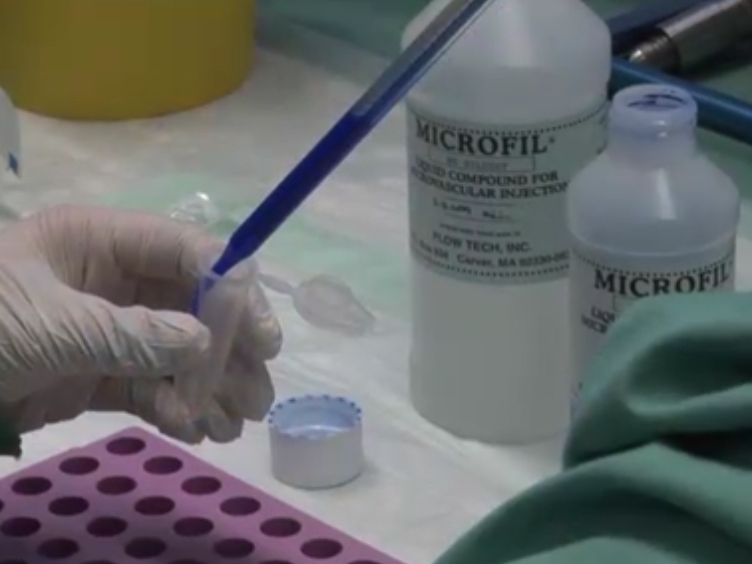