Invasive instrumentation of the fetal lamb provides accurate physiologic measurements of the transitioning circulation in a model that closely mimics the newly born infant.

Birth asphyxia accounts for nearly one million deaths worldwide each year, and is one of the primary causes of early neonatal morbidity and mortality. Many aspects of the current neonatal resuscitation guidelines remain controversial given the difficulties in conducting randomized clinical trials owing to the infrequent and often unpredictable need for extensive resuscitation. Most studies on neonatal resuscitation stem from manikin models that fail to truly reflect physiologic changes or piglet models that have cleared their lung fluid and that have completed the transition from fetal to neonatal circulation. The present protocol provides a detailed step-by-step description on how to create a perinatal asphyxiated fetal lamb model. The proposed model has a transitioning circulation and fluid-filled lungs, which mimics human newborns following delivery, and is, therefore, an excellent animal model to study newborn physiology. An important limitation to lamb experiments is the higher associated cost.

Perinatal asphyxia occurs in roughly 4 per 1,000 term births in the United States and is responsible for approximately 25% of the 4 million neonatal deaths worldwide1,2. Throughout the fetus's natural development, several adaptations must take place during labor and at birth to allow for a seamless transition from the intra- to the extrauterine environment when the lungs take on the role of the placenta as the organ of gas exchange. Any failure of the newborn to adequately transition at birth further compromises resuscitative efforts. Instances when fetal lung clearance is incomplete or delayed3,4, and circumstances that result in a persistent high pulmonary vascular resistance (PVR)5 impact the efficacy of ventilation, which remains the most important intervention in the resuscitation of the asphyxiated newborn6. In addition, immediate clamping of the umbilical cord and removal of the low-resistance placenta can lead to abrupt changes in cardiac output that may cause myocardial dysfunction7,8.

Owing to the infrequent need for aggressive resuscitation (need for chest compressions and/or epinephrine administration)1,9, there is a lack of strong evidence from large randomized clinical trials to support the current neonatal resuscitation program (NRP) guidelines. Many translational research studies in neonatal resuscitation are conducted using postnatal animal models (particularly piglets) that fail to adequately depict the transitioning fetal circulation and fluid-filled lungs inherent to the newborn in the delivery room. Given the unique challenges related to transition from fetal circulation to neonatal circulation, the perinatal asphyxiated cardiac arrest fetal lamb model is ideal to study newborn resuscitative physiology.

The studies by Joseph Barcroft on fetal lambs, as early as the 1930's, laid the foundation for fetal and neonatal physiology10. In the second half of the 20th century, Geoffrey Dawes' innovative and meticulous experiments on fetal lamb models, and later those by Abraham Rudolph have tremendously contributed to the knowledge of cardiovascular and pulmonary physiology in the fetus11,12. In recent years, studies on fetal/neonatal lamb models have provided a better understanding of the impact of ventilation on hemodynamics13,14, the effects of oxygenation on PVR15,16, as well as the circulatory changes that occur during cord clamping7,17. Finally, in the past year, the newborn lamb has served as a novel model to study the hemodynamic effects during resuscitation18,19,20. A step-by-step narrative of what is involved in conducting a lamb experiment, as well as a detailed description of the surgical instrumentations and the experimental methodology will be presented.

All protocols have been approved by the Institutional Animal Care and Use Committee (IACUC) by the State University of New York Buffalo. An illustration of the methodology depicting invasive and non-invasive monitoring is shown in Figure 1.

NOTE: Prior to the caesarean section, the ewe is sedated with diazepam and ketamine and intubated followed by continuous inhalation of isoflurane (1–4%). Adequacy of anesthesia is monitored by evaluation of muscle tone and eye reflexes along with continuous monitoring of blood oxygen level with a pulse oximeter and the heart rate. During the instrumentation, lambs will be under the influence of maternal anesthesia and will also receive local anesthetic to sites of instrumentation.

NOTE: The cesarean section and fetal procedures are considered acute surgeries in which the animals are euthanized by administering sodium pentobarbital 100 mg/kg IV. Ewes are euthanized following the delivery of the lambs and the lambs are euthanized after the completion of the experiments. Euthanasia is confirmed by asystole. A secondary method of bilateral thoracotomy or exsanguination is also employed. In this case, the aseptic technique is not practiced during the surgery. Personnel still need to wear protective attire during animal contact.

Following instrumentation of the fetal lambs, hemodynamic variables can be recorded (Figure 3 and Figure 4), then analyzed and interpreted (Figure 5). Frequent blood samples can be collected, and Figure 6 shows the pH and PaCO2 data from one of the experiments. Occasionally, catheters or flow probes may malfunction or get dislodged and data can, therefore, not be collected and used for analysis, as is shown in Figure 7. 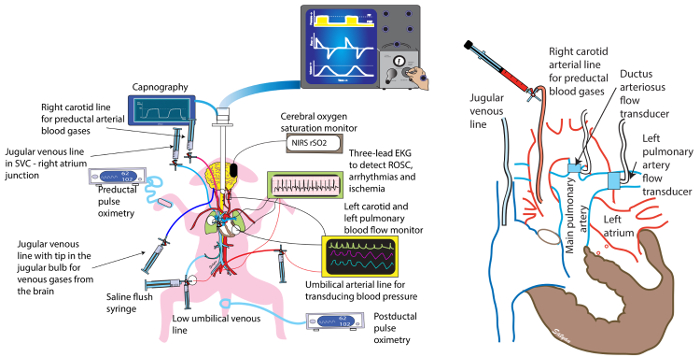 Figure 2: Great vessel isolation. Gentle separation of connective tissue creates a space for wet umbilical tape to be placed around vessels (A) with subsequent placement of flow probes for ultrasound measurements of blood flow inside each vessel (B). Please click here to view a larger version of this figure. 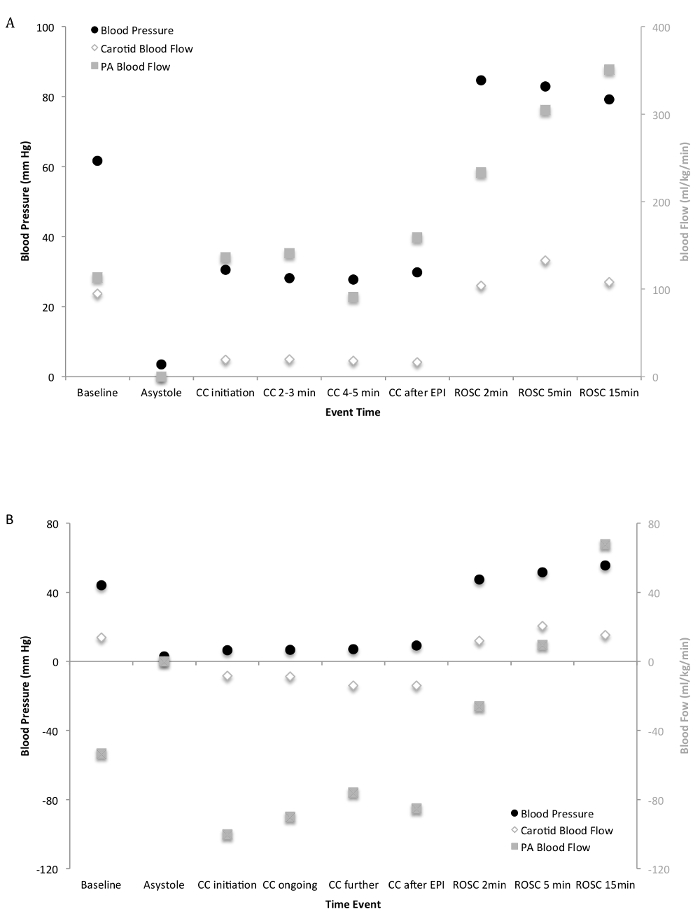 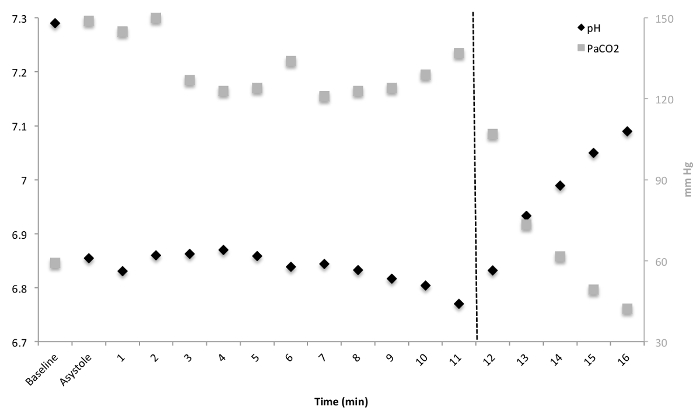 Figure 6: Blood gas analysis during an experimental study. Dashed line represents time of return of spontaneous circulation. PaCO2 is plotted on the secondary axis. Please click here to view a larger version of this figure.

The lamb model is comparable in size to human newborns and allows easy instrumentation to measure invasive hemodynamic variables. The fetal/newborn lamb model has been an invaluable research tool that has richly contributed to understanding the transitioning circulation, as well as the newborn's pulmonary and cardiovascular physiology. Several experimental lamb models have been established over the years to study optimal ventilation strategies in preterm lambs13,14,21, pulmonary hemodynamics in a persistent pulmonary hypertension ductal ligation model22,23,24, pulmonary vascular reactivity in a meconium aspiration model25,26,27, as well as surgical models of fetal myelomeningocele28,29, congenital diaphragmatic hernia30,31, and congenital heart defect32,33, which all have had a considerable impact on clinical management.

During fetal instrumentation, care needs to be taken to avoid any pressure on the umbilical cord, as this could cause undue stress on the lamb and could affect delivery of anesthesia to the lamb. Flow probes and catheters need to be carefully sutured to the skin of the lamb to protect the vessels from injury if inadvertent traction is placed on the catheters. Surgical instrumentation of the fetal heart poses an increased risk for devastating complications (death from exsanguination) unless meticulously performed. The thoracotomy needs to be completely sutured in layers because an incomplete seal may influence chest compression efficiency. Following intubation of the lambs, the lung liquid should be drained passively by tilting the fetal head to the side. On average, 15 - 20 mL/kg of lung liquid can be passively drained. The remaining lung liquid in the fetal lamb, then, approximates the estimated lung liquid in human newborns. The ETT needs to be occluded prior to asphyxiation by cord clamping to prevent gas exchange during gasps. A 5-min period of cardiac arrest is observed following pulselessness, as return of spontaneous circulation, otherwise, occurs rapidly following positive pressure ventilation. Owing that fetal baseline arterial gases do not demonstrate significant acidosis, fetal instrumentation just prior to experiments does not appear to cause considerable stress on the lamb. Gestation is usually determined prior to experiments by ultrasound confirmation, but can also be assessed by careful examination of the ewe in experienced hands. In the event of multiple fetuses, each lamb is instrumented sequentially. An important consideration in conducting lamb experiments is the significantly higher cost.

Until recently, the lamb model has not been used to study newborn resuscitation. Since the current NRP recommendations are primarily extrapolated from the adult literature or from manikin34,35 and post-natal animal models36 that do not adequately depict the newborn physiology in the delivery room, the protocol described in this article demonstrates the promising contributions that the perinatal asphyxiated lamb model can provide to improve resuscitative efforts of newborns that fail to adequately transition to the extrauterine environment. Figure 5 shows blood pressure and flows in a newborn lamb that has been successfully resuscitated. Comparing blood pressure and flows (with the advantage to measure ductus arteriosus flow in this model) in experiments assessing different compression-to-ventilation ratios and/or vasoactive medications in a model with transitioning circulation will provide a better understanding of neonatal hemodynamics during resuscitation. Experiments on this model will improve the understanding of optimal chest compression ratio, timing and dosing of administered medications, impact of inspired oxygen during neonatal resuscitation, as well as address many other hypotheses.

The authors have no conflicts of interest to declare 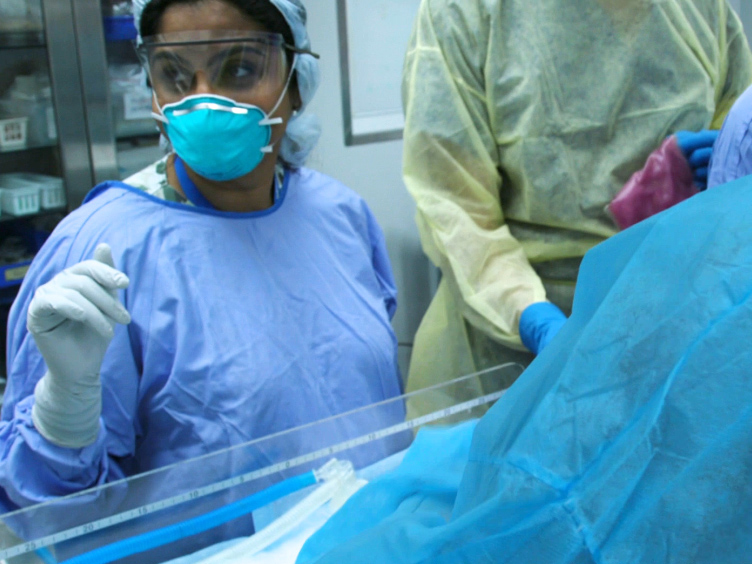