Here we describe the detailed methodology required to conduct stress-enhanced fear learning (SEFL) experiments, a preclinical model of post-traumatic stress disorder, in both rats and mice. The model utilizes aspects of Pavlovian fear conditioning and freezing as an index of enhanced fear in rodents.

Fear behaviors are important for survival, but disproportionately high levels of fear can increase the vulnerability for developing psychiatric disorders such as post-traumatic stress disorder (PTSD). To understand the biological mechanisms of fear dysregulation in PTSD, it is important to start with a valid animal model of the disorder. This protocol describes the methodology required to conduct stress-enhanced fear learning (SEFL) experiments, a preclinical model of PTSD, in both rats and mice. SEFL was developed to recapitulate critical aspects of PTSD, including long-term sensitization of fear learning caused by an acute stressor. SEFL uses aspects of Pavlovian fear conditioning but produces a distinct and robust sensitized fear response far greater than normal conditional fear responses. The trauma procedure involves placing a rodent in a conditioning chamber and administering 15 unsignaled shocks randomly distributed over 90 minutes (for rat experiments; for mouse experiments, 10 unsignaled shocks randomly distributed over 60 minutes are used). On day 2, rodents are placed in a novel conditioning context where they receive a single shock; then, on day 3 they are placed back in the same context as on day 2 and tested for changes in freezing levels. Rodents that previously received the trauma display enhanced levels of freezing on the test day compared to those that received no shocks on the first day. Thus, with this model, a single highly stressful experience (the trauma) produces extreme fear of the stimuli associated with the traumatic event.

Fear is a critical behavior for survival, enabling individuals to recognize and respond to threats. However, exaggerated fear responses can contribute to the development of psychiatric disorders such as post-traumatic stress disorder (PTSD). One characteristic of PTSD is an exaggerated response to mild stressors, particularly those reminiscent of the original trauma, and a tendency to develop new fears1,2. In the laboratory, fear is often measured through freezing behavior, which is a reliable and ethologically valid index of fear in humans and rodents3,4. While it is known that PTSD involves dysregulation of fear and enhanced fear expression, there is a lack of robust animal models of PTSD that reliably capture this augmented fear response to a relatively innocuous stimulus.

This protocol provides the detailed methodology required to conduct stress-enhanced fear learning (SEFL) experiments, a reliable and robust preclinical model of PTSD, in both rats and mice. SEFL utilizes aspects of Pavlovian fear conditioning, yet it produces distinct responses from normal fear conditioning and recapitulates the enhanced fear following traumatic stress observed in PTSD patients5,6. In this model, a single highly stressful experience (referred to here as trauma) leads to lasting behavioral changes, including extreme fear of stimuli associated with the traumatic event, increased anxiety, increased startle reactivity, and altered glucocorticoid signaling7,8. The major feature of SEFL is that following exposure to a traumatic stressor (a series of unsignaled shocks) in a distinct context, animals show an exaggerated fear response to a mild stressor (e.g., a single shock) in a different context. Importantly, the SEFL effect is not due to the generalization from the trauma context to the novel context or increased shock sensitivity5. In our model, we purposefully utilize procedures that reduce any generalization to a novel context such as distinct transport, odor and grid floor pattern. Therefore, unlike normal fear conditioning, SEFL is a non-associative process that leads to a new fear learning that is disproportionately related to environmental cues not directly associated with the traumatic experience. Extensive work shows that a single 90-minute session containing 15 unpredictable shocks in rats (or a single 60-minute session containing 10 unpredictable shocks in mice) induces a long-lasting sensitization of fear conditioning along with increased anxiety and dysregulation in the circadian rhythm of basal corticosterone. In contrast, pre-exposure to a single footshock does not produce SEFL9. Furthermore, SEFL can be utilized reliably in both rats and mice.

Hence, the SEFL model of PTSD is a powerful tool for probing the biological mechanisms involved in PTSD pathophysiology. Using SEFL, researchers can examine how exposure to a trauma can affect future fear learning. In addition, this model can be useful for investigating specific cellular and molecular mechanisms that may be involved in regulating enhanced fear expression as observed in PTSD.

3. SEFL Procedure for Rats and Mice

Prior experiments have also shown that SEFL produces an enhanced anxiety-like phenotype, as indicated by decreased exploration during the open field test8. The effects of the SEFL procedure have been shown to be long-lasting, persisting for at least 90 days after trauma, further establishing the robustness of the model5. Hence, SEFL is a valuable tool for probing biological mechanisms of PTSD.

It is important to note that SEFL is not merely due to fear generalization or increased fear expression, since the traumatic experience must come before the mild stressor to increase fear of the context paired with the mild stressor5. This precludes the interpretation that SEFL derives from enhanced fear expression. In addition, SEFL cannot be interpreted as generalization of fear from the trauma context to a novel context because previous results show that extinction of fear of the traumatic memory does not mitigate SEFL5,14. As a hallmark of PTSD is resistance to extinction (in the form of exposure therapy), this further strengthens the link between SEFL and PTSD15. Also, manipulations that produce amnesia of the fear conditioning to the trauma context leave SEFL unaffected, further indicating that SEFL is not due to fear generalization5,10. Finally, while we typically examine enhanced learning of contextual fear, the unsignaled shock stress also enhances auditory fear conditioning. These findings indicate that SEFL is a form of stable sensitization in the fear learning circuitry.

While SEFL model is simple in design, aspects of the protocol need to be carefully adhered to for consistent results. For instance, researchers should take caution to use very different methods of transport for Context A and Context B to reduce baseline generalization. Failure to make Contexts A and B sufficiently different can also result in high levels of generalization from Context A to Context B prior to shock, complicating interpretation of the results. Another factor that should also be taken into consideration is the time that animals remain in Context B following the single shock. Failure to remove animals from the context shortly after the single shock can produce extinction of fear to Context B, resulting in decreased freezing during the subsequent context test.

SEFL procedure can be adapted to multiple species, as demonstrated by its ability to produce the sensitized fear phenotype in both mice and rats. It is important to note the slight differences in the protocol between mice and rats; for example, mice require a slightly more intense mild stressor (a 2-s shock compared to a 1-s shock in rats). This is necessary to account for the fact that mice in general show lower freezing levels than rats (see Figure 5). Furthermore, it is important to note that these protocols were developed primarily for Long-Evans rats and C57Bl/6 mice. While the robustness of this procedure suggests that it can be adapted for different strains of mice and rats, it is important to consider behavioral differences between strains. For example, DBA/2 mice show decreased fear conditioning compared to C57Bl/6 mice and may therefore require a stronger training protocol16. In contrast, Sprague-Dawley rats tend to show higher freezing levels than Long-Evans rats and may require a weaker training protocol to prevent ceiling effects17. We recommend the manipulating of current between 0.5 and 1.5 mA, as it is a very effective way to titrate the strength of conditioning.

In conclusion, the SEFL procedure produces reliable and long-lasting behavioral enhancements in fear learning that captures the increased fear responses observed in PTSD patients. SEFL also alters other measures of anxiety including decreased exploratory behavior in the open field test, potentiated startle reactivity, and increased glucocorticoid receptor expression in the BLA8. Hence, SEFL can be powerful tool for understanding certain aspects of this PTSD phenotype.

Dr. Fanselow is a founding board member of Neurovation Labs. 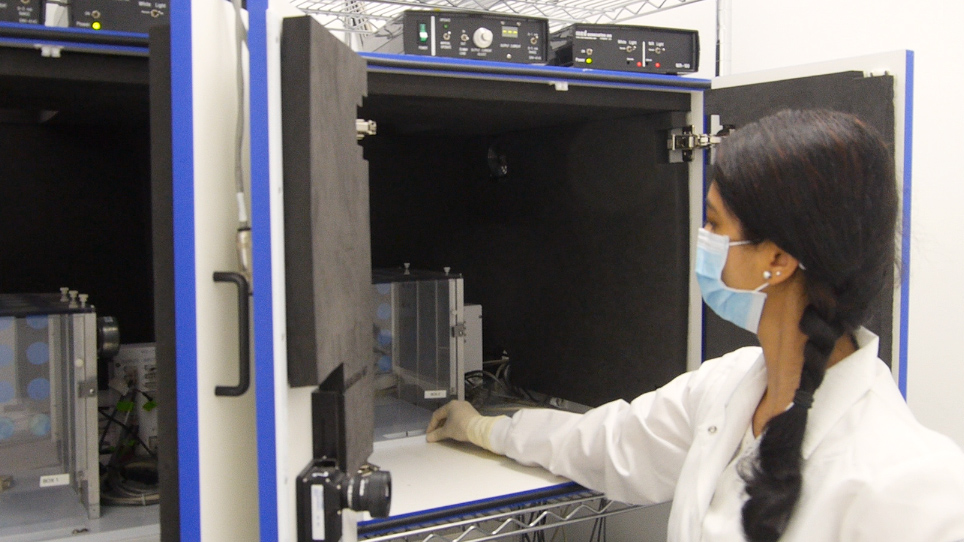