Multiscale surface structures have attracted increasing interest owing to several potential applications in surface devices. However, an existing challenge in the field is the fabrication of hybrid micro-nano structures using a facile, cost-effective, and high-throughput method. To overcome these challenges, this paper proposes a protocol to fabricate multiscale structures using only an imprint process with an anodic aluminum oxide (AAO) filter and an evaporative self-aggregation process of nanofibers. Unlike previous attempts that have aimed to straighten nanofibers, we demonstrate a unique fabrication method for multiscale aggregated nanofibers with high aspect ratios. Furthermore, the surface morphology and wettability of these structures on various liquids were investigated to facilitate their use in multifunctional surfaces.

Nanoscale textured structures such as nanoparticles, nanotubes, and nanofibers have attracted attention in the scientific community, as they demonstrate unique characteristics in various applications including electrical, biomedical, optical, and surface engineering1,2,3,4,5,6,7,8. In particular, nanofibers are widely used in stretchable and transparent electrodes9, wearable sensors10,11, interconnections12,13, and nano-optics applications14. Among the various methods of fabricating nanoscale structures, such as sol-gel methods, self-assembly, lithography, and replication15,16,17,18,19,20, direct replication using a template is currently considered a promising method because it is simple, cost-effective, and applicable to various curable materials21,22,23,24,25,26.

To this end, we report a unique method for fabricating multiscale structures of tangled nanofiber by exploiting the aggregation phenomenon in a positive manner. Here, the nanofiber structure is imprinted using an AAO filter and polyurethane-acrylate (PUA)-type resins with a viscosity of 257.4 cP. After UV nano imprint lithography (UV-NIL) is performed, the mold is etched with a NaOH solution. To characterize the proposed multiscale structures, we investigate the pattern behaviors of the sample with aggregated nanofibers and the surface wettability after proper surface treatments such as coating with a self-assembled monolayer and UV ozone treatment. Furthermore, we propose that the multiscale porous surface can be converted simply to a slippery surface using a lubricant-infused process.

We demonstrated a fast and simple method for the fabrication of multiscale nano-micro hybrid structures using an AAO filter as an imprinting mold. The entire process took 30 min (Figure 4). It was noted that after undergoing the etching process using NaOH, the resultant surface exhibited an opaque color similar to the original AAO filter, owing to the aggregated nanofiber assembly caused by surface tension. Further, the results of the EDX analysis confirmed that the AAO filter was completely removed by wet chemical etching (Figure 3).

The surface characteristics were determined by measuring the contact angle by dropping onto the surface of specimen 5 μL of water droplets. Because the materials used in the AAO-filter-mediated imprint process exhibit superhydrophilicity, and the fabricated multiscale structures have highly porous networks due to self-aggregated nanofibers, the water droplets tend to be instantaneously absorbed into the substrates. However, the hydrophilicity can be modified to hydrophobicity using proper surface treatments. We demonstrated, as shown in Figure 5, that the surface of the imprinted multiscale structures was modified to a hydrophobic surface with a contact angle of approximately 117° after OTS coating. In addition, UV ozone treatment can further increase the contact angle of the surface by approximately 10° (Figure 6). After sequentially performing OTS coating and UV ozone treatment onto the imprinted surface, it was confirmed that the resulting contact angle increased to 134° (Figure 7).

Figure 1: Procedure for fabricating a structure with soluble aluminum oxide. Please click here to view a larger version of this figure.

Figure 2: SEM images of a nano-micro multiscale structure after the etching process, showing the surface and cross-section. Please click here to view a larger version of this figure.

Figure 3: Result of EDX analysis after the etching of nano-micro multiscale structures fabricated using an AAO filter. Please click here to view a larger version of this figure.

Figure 4: Schematic for the fabrication of a nano-micro multiscale structure by aggregation of nanofibers after complete etching. Please click here to view a larger version of this figure.

Figure 5: Contact angle after OTS coating on the surface and nano-micro structure. Please click here to view a larger version of this figure.

Figure 6: Contact angle after UV ozone treatment on the surface and nano-micro structure. Please click here to view a larger version of this figure.

Figure 7: Contact angle after sequentially performing OTS coating and UV ozone treatment on the surface and nano-micro structure. Please click here to view a larger version of this figure.

The self-aggregated nanofiber assembly allows us to provide various functional surfaces through the proper surface treatment. After imprinting, the primary surface is hydrophilic, but it can be modified and become hydrophobic by being subjected to UV ozone treatment and surface energy change after OTS coating. In addition, the proposed multiscale porous structures can be converted to a slippery surface via the liquid lubricant-infusion process.

The surface with nano-micro multiscale structures is opaque, possibly owing to the irregularity of the aggregated nanofibers, and this characteristic can be employed in optical applications. Thus, in subsequent studies, we will investigate the optical characteristics of the substrate using a UV-Vis-IR spectrometer. We expect that the optical properties of such surfaces can be applied to industries that require diffused reflection of light.

The authors have no competing financial interests to disclose.

This material is based on work supported by the Basic Science Research Program through the National Research Foundation of Korea (NRF) funded by the Ministry of Science, ICT and Future Planning (NRF-2017R1A2B4008053) and the Ministry of Trade, Industry and Energy (MOTIE, Korea) under Industrial Technology Innovation Program No. 10052802 and the Korea Institute for the Advancement of Technology (KIAT) through the Encouragement Program for The Industries of Economic Cooperation Region (N0002310). 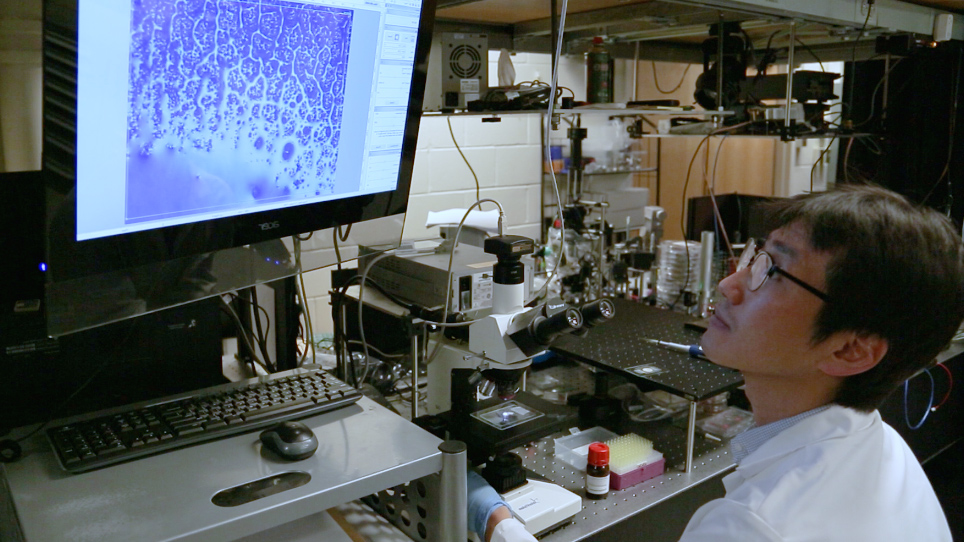