Ischemia followed by reperfusion of cerebral blood flow after a stroke leads to the death of nerve cells and loss of brain tissue. The most commonly used animal model for studying stroke is the middle cerebral artery occlusion (MCAO) model. Previous research studies have reported different infarct sizes even when the same experimental animal species was used under similar MCAO conditions. Therefore, we developed an improved experimental method to address this discrepancy. Mice were subjected to MCAO using a filament as the occlusion material to mimic human stroke conditions and filament thickness was optimized to establish more reproducible infarction volume. Mice treated with a methanol extract of Glycyrrhizae Radix et Rhizome (GRex) following stroke induction showed a significantly decreased total infarction volume and increased number of surviving cells relative to the untreated control group. This modified experimental protocol successfully and reproducibly demonstrated the beneficial effect of GRex on ischemic stroke.

Brain damage caused by ischemia and reperfusion of cerebral blood flow leads to the death of nerve cells and loss of brain tissue. This type of brain damage continues to increase with the increasing prevalence of cerebrovascular diseases due to the spread of metabolic diseases such as obesity, hypertension, and diabetes mellitus1,2. The absolute number of elderly patients with stroke has dramatically increased worldwide, and the cost of medical care for these patients, who are often left with long-term disabilities, is a major societal burden. Therefore, secondary disabilities should be mitigated as much as possible to reduce the economic burden1,2.

The most commonly used rodent model of cerebral infarction is the middle cerebral artery (MCA) occlusion (MCAO) model, in which the MCA is occluded with a silicon-coated surgical suturing filament to block blood flow, causing ischemic stroke3,4. Using a filament as the occlusion material allows the control of occlusion time and permanence by manipulating the duration of the intra-luminal filament insertion.

Previous studies have shown that even when the same rodent MCAO model is used, the total volume of cerebral infarction varies between experiments, causing low reproducibility of the studies. To improve reproducibility, we optimized the thickness of the filament mint used in the experiment. The results of a preliminary study of the cerebral ischemic period and induced infarction showed that an ischemic period longer than 60 min allowed the volumetric region of damaged brain tissue to be observed and quantified.

Glycyrrhizae Radix et Rhizoma (GR), also known as licorice, consists of the dried roots and rhizomes of Glycyrrhiza uralensis and G. glabra. It has been used in Chinese and Korean traditional medicine for various purposes including as a food additive and medicinally5,6,7.

In a previous study8, pre-treatment with GR methanol extract (GRex) showed an anti-apoptotic effect in MCAO mice, including significant prevention of the decrease in the protein expression of B-cell lymphoma 2 (Bcl-2) and Bcl extra-large (Bcl-xL). This study was conducted to improve the reproducibility of the conventional MCAO mouse model by evaluating its efficiency in determining if post-infarct treatment with GRex effectively reduced the infarct volume in MCAO-induced cerebral damage.

All procedures involving animals were approved by the ethics committee of Pusan National University (approval number, PNU-2016-1087). A graphical overview of this study is shown in Figure 1.

1. Preparation and Administration of GRex

NOTE: The GR used in this study was purchased from a commercial pharmaceutical company.

In the sham-operated normal group, no cerebral infarct is observed whereas in the control group, a relatively wide range of damaged areas is observed. In the mice administered 300 mg/kg GRex in the MCAO model group, a statistically significant reduction in damaged area is observed (Figure 2). 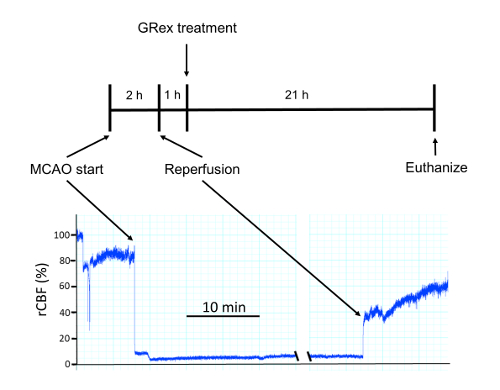 Figure 1. Scheme of the middle cerebral artery occlusion (MCAO) model and treatment with the methanol extract of Glycyrrhizae Radix et Rhizome (GRex). Mice were treated with 300 mg/kg of GRex 1 h after MCAO reperfusion, which was maintained for 2 h. Mice were euthanized 24 h after the MCAO commenced, and then the harvested brain slices were stored in a deep freeze for protein assay or stained with TTC solution for infarct measurement. Please click here to view a larger version of this figure. 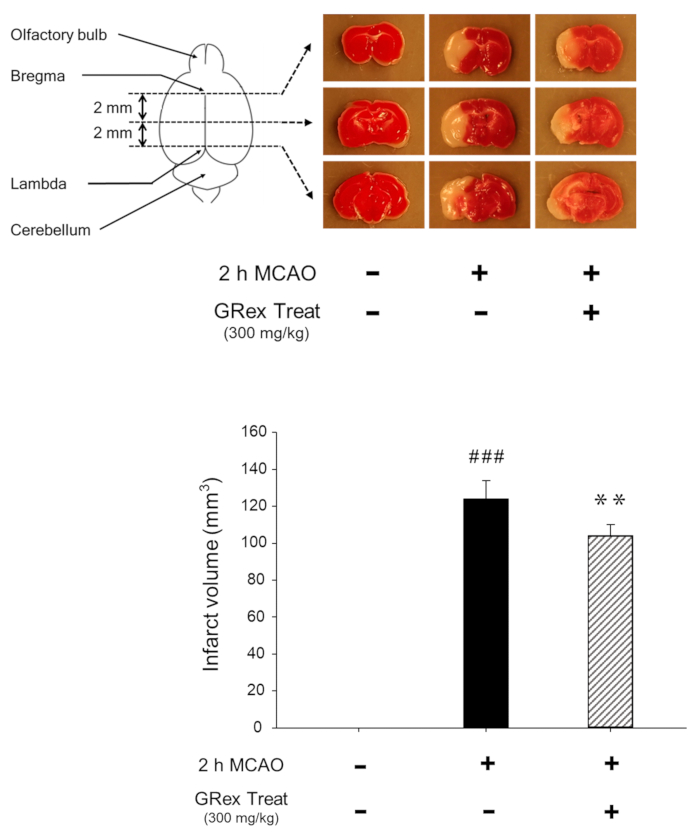 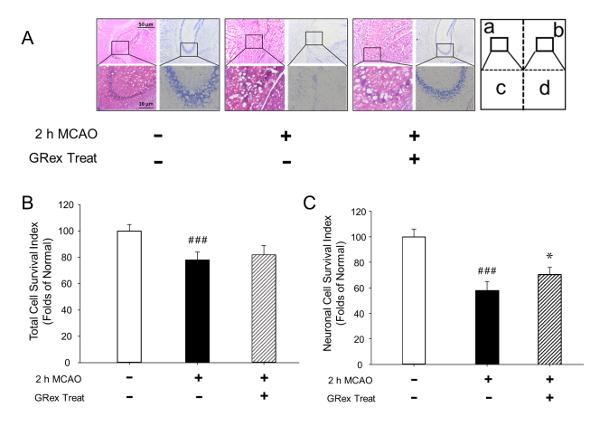 Figure 3. Representative images of (A) hematoxylin and eosin (H&E)- and cresyl violet-stained brain sections and (B, C) color intensities, which were used to evaluate the effects of the methanol extract of Glycyrrhizae Radix et Rhizome (GRex) on the brains of middle cerebral artery occlusion (MCAO)-injured mice. Histological integrity and tissue damage in mouse brains were assessed using (B) H&E or (C) cresyl violet staining 1 h post-MCAO reperfusion. Red staining in H&E-stained sections indicates nuclear damage. Neurons dyed with cresyl violet were stained purple. The GRex-treated group showed better histological integrity than the control group did, indicating less neuronal cell death. a, H&E-stained; b, cresyl violet-stained; c and d, enlargements of a and b, respectively. Results are means ± SDs. ###p < 0.001, and *p<0.05 vs normal and control groups; n = 6 per group. Please click here to view a larger version of this figure.

With the increasing prevalence of metabolic diseases such as chronic hypertension, diabetes, and hyperlipidemia, which are major risk factors for stroke, stroke prevention and treatment have become an important area of medical research12,13. Deficits in language and movement after a stroke are strongly correlated with the degree of damage to brain tissue14 and result in a poor quality of life for patients and their families15. It is important to use an appropriate animal model of stroke that involves the same pathological changes as those that occur in human disease to study the efficacy of drug treatments. The MCAO model mimics thrombotic strokes by obstructing cerebral arterial vessels. It is commonly used because it is relatively reproducible and minimally invasive16,17,18,19.

However, a comparison of the area of cerebral infarction induced for the same resting time reported by several researchers, reveals that the total infarction volume varies between studies. We concluded that this was due to differences in the occlusion materials used and the surgical procedure. Therefore, although the MCAO rodent model is considered highly reproducible, it is not always possible to obtain such reproducibility. Therefore, we optimized the thickness of filaments used in mouse MCAO model through our preliminary study and previous report8.

The most distinctive result of our preliminary study compared to that of other studies is that TTC staining did not reveal any cerebral infarction when the ischemia was induced for 60 min (data not shown). Even following 90 and 120 min of MCAO in the mice, our result showed a lower infarction volume than that of other research studies. One limitation of this study is that we have not yet determined the exact cause of these results; however, we are planning to explore this phenomenon in further studies.

Numerous studies have recently reported that GR or its components have pharmacological activities including antitumor, antimicrobial, and anti-inflammatory effects20,21,22. A previous study reported that GRex pre-treatment effectively inhibited the activation of caspase-9 by upregulating the protein expression of Bcl-2 and Bcl-xL8. However, preventative treatments for stroke are less clinically relevant than post-stroke treatment.

In this study, which was based on a previous study8 evaluated the effectiveness of GRex post-treatment in an MCAO mouse model. As depicted in the representative results section, GRex post-treatment showed beneficial effects in reducing total infarction volume and ameliorating damages to cellular structures in MCAO-induced brain injury in mice. The specific action mechanisms of GRex on post-ischemic brain injury lacks in this study, but the experimental protocols used in this study successfully demonstrated the effects of this herbal remedy by mimicking human effects of a stroke.

Although the experimental results are not observed in this study, the neuronal deficit score (NDS) was measured in our preliminary experiment and no significant difference was noted between the control and the GRex-treated groups, which is presumed to have been due to the short observation time compared to the severity of the stroke. We are planning to observe the effects of GRex treatment on the NDS over a long period after causing moderate damage.

In conclusion, the neuroprotective effect of GRex treatment in a mouse MCAO model was demonstrated in this study with good reproducibility. The proteins involved in the underlying mechanism should be examined in future studies. 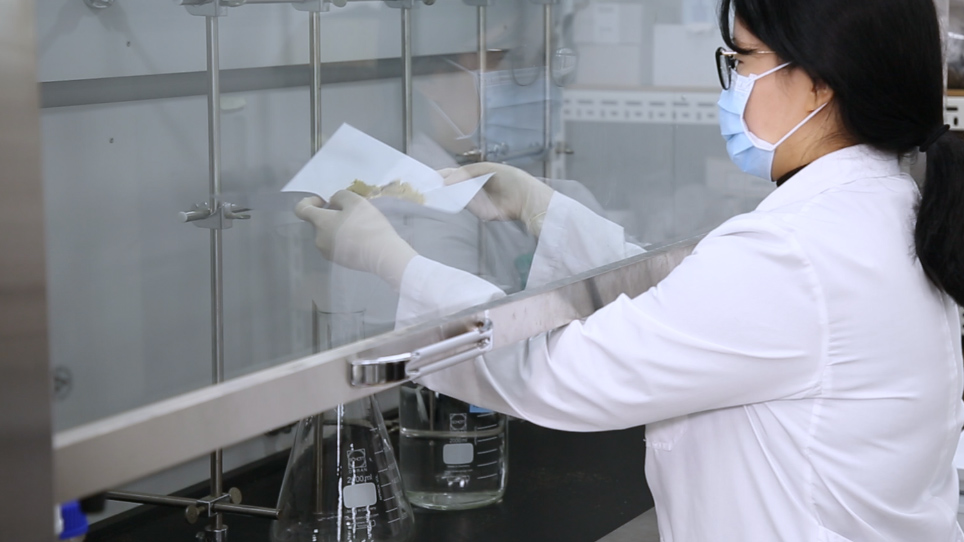