In the past decade, adipose tissue transplants have been widely used in plastic surgery and orthopaedics to enhance tissue repletion and/or regeneration. Accordingly, techniques for harvesting and processing human adipose tissue have evolved in order to quickly and efficiently obtain large amounts of tissue. Among these, the closed system technology represents an innovative and easy-to-use system to harvest, process, and re-inject refined fat tissue in a short time and in the same intervention (intra-operatively). Adipose tissue is collected by liposuction, washed, emulsified, rinsed and minced mechanically into cell clusters of 0.3 to 0.8 mm. Autologous transplantation of mechanically fragmented adipose tissue has shown remarkable efficacy in different therapeutic indications such as aesthetic medicine and surgery, orthopedic and general surgery. Characterization of micro-fragmented adipose tissue revealed the presence of intact small vessels within the adipocyte clusters; hence, the perivascular niche is left unperturbed. These clusters are enriched in perivascular cells (i.e., mesenchymal stem cell (MSC) ancestors) and in vitro analysis showed an increased release of growth factors and cytokines involved in tissue repair and regeneration, compared to enzymatically derived MSCs. This suggests that the superior therapeutic potential of microfragmented adipose tissue is explained by a higher frequency of presumptive MSCs and enhanced secretory activity. Whether these added pericytes directly contribute to higher growth factor and cytokine production is not known. This clinically approved procedure allows the transplantation of presumptive MSCs without the need for expansion and/or enzymatic treatment, thus bypassing the requirements of GMP guidelines, and reducing the costs for cell-based therapies.

Adipose tissue, long used as a filler in reconstructive and cosmetic surgery, has recently become more popular in regenerative medicine once recognized as a source for mesenchymal stem cells (MSCs)1. Lipoaspirates dissociated enzymatically into single-cell suspensions yield an adipocyte-free stromal vascular fraction (SVF) that is used unaltered in the patient or, more commonly, is cultured for several weeks into MSCs2.

However, enzyme dissociation ruptures the tissue microenvironments, secluding neighboring regulatory cells from presumptive regenerative cells that become considerably modified by in vitro culture. To avoid such experimental artifacts and consequent functional alterations, attempts have been made to process adipose tissue for therapeutic use while maintaining its native configuration as intact as possible3,4. Notably, mechanical tissue disruption has started to replace enzymatic dissociation. To this end, the full immersion closed system micro-fragments lipoaspirates into sub-millimeter, blood- and oil-free tissue clusters (e.g., Lipogems) via a sequence of sieve filtration and steel marble induced disruption3. Autologous transplantation of micro-fragmented adipose tissue, using this closed system technology, has been successful in multiple indications, spanning cosmetics, orthopedics, proctology and gynaecology4,5,6,7,8,9,10,11,12,13.

Comparison between human micro-fragmented adipose tissue (MAT) obtained with the closed system device and isogenic SVF revealed that with respect to vascular/stromal cell distribution and secretory activity in culture, MAT contains more pericytes, which are presumptive MSCs14, and secretes higher amounts of growth factors and cytokines15.

Ethical approval for the use of human tissues in this research was obtained from the South East Scotland Research Ethics Committee (reference: 16/SS/0103).

NOTE: All instruments used in the manual lipo-aspiration procedure are provided by the manufacturer of the micro-fragmentation device.

NOTE: This protocol is meant for the research use only. Micro-fragmentation is performed with the help of a commercially available device (Table of Materials).

4. Digestion of the micro-fragmented adipose tissue and cell isolation 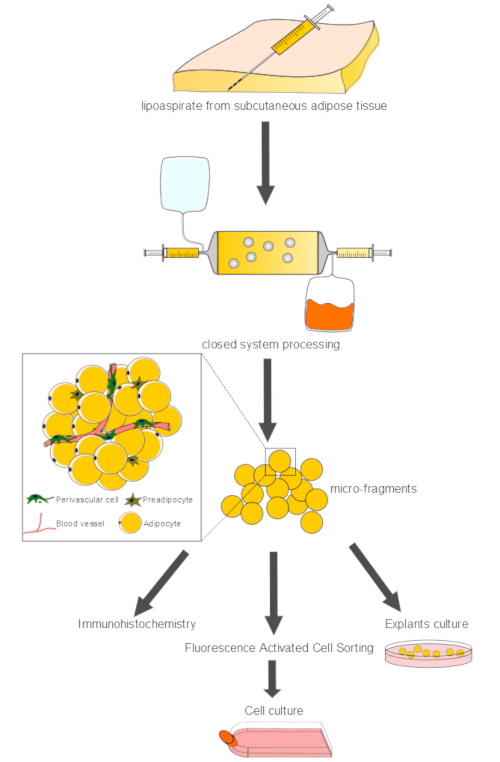 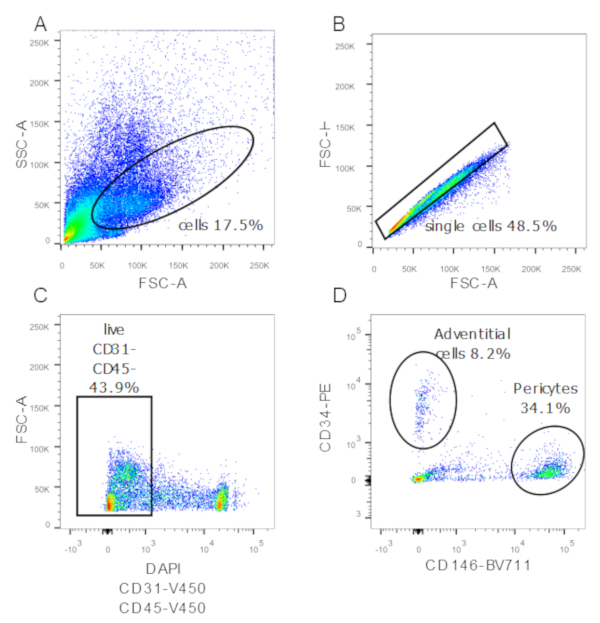 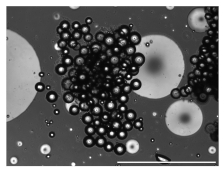 Figure 4: Vasculature network in MAT. Endothelial cells are stained with UEA-1. Boxed areas in A are showed enlarged in B and C. Arrowheads indicate pericytes, which have been stained using antibodies against PDGFRβ and NG2. Scale bar = 50 µm. Please click here to view a larger version of this figure.

Manually aspirated human subcutaneous adipose tissue and saline solution are loaded into a transparent plastic cylinder containing large pinball-style metallic spheres that, upon vigorous manual shaking of the device, rupture the fat into sub-millimeter fragments. Attached filters and outlet allow eliminating debris, blood and free lipids and MAT is collected in a syringe linked to the device. Here, MAT has been successfully further processed for immunohistochemistry, flow cytometry and culture, although this specific device was developed in a medical perspective, to replace in the theatre the enzymatically produced adipose tissue stromal vascular fraction or culture derived adipose stem cells, and indeed proved highly efficient in plastic surgery and diverse other cell-based therapies4,5,6,7,8,9,10,11,12,13.

Therefore, adipose tissue long used intact as a mere filler16 returns in its native 3-dimensional configuration, after years of enzymatic dissociation and in vitro culture. This follows a general trend to grow and study tissues in their innate multicellular arrangement rather than as dispersed cell populations, as illustrated by the growing popularity of organoids17.

Adipose tissue fragmentation using this mechanical device has proven reliable and reproducible and no modification of the original protocol was ever necessary. The ordinary supply of human subcutaneous fat for experimental studies is a lipoaspirate collected for cosmetic reasons, which is loaded directly onto the fragmentation device. A limitation for users in the research laboratory, though, is that the adipose tissue to be processed must be gently aspirated by hand, to maintain tissue microarchitecture as intact as possible, and not suck out with a vacuum pump as is routinely done in the operating room. Unless a surgeon willing to collect fat manually can be identified, a freshly resected abdominoplasty residue can be used. The fat attached to the inner aspect of the abdominal skin can then be carefully and sterilely aspirated with the syringe provided with the kit. This is the reason why we have described this step at the beginning of the protocol (step 1).

Beyond these recent results, much remains to be understood regarding the molecular basis of MAT therapeutic potential. To this end, the method here described represents a simple, fast technique that is low-impact to the adipose niche and generates MAT ideal for further experimental manipulation. From an ancillary point of view, research is also conducted to improve the usability of MAT in the clinic; in this respect, determining whether micro-fragmented adipose tissue can be frozen for delayed autologous or allogeneic administration appears as a priority. Finally, it will be important to determine whether other tissues and organs such as the bone marrow, pancreas or skeletal muscle, to cite but a few, can be micro-fragmented with the same device and provide intact microvasculature associated cellular niches amenable to experimental intervention.

CT is a founder of Lipogems.

The authors wish to thank Claire Cryer and Fiona Rossi at the University of Edinburgh for their expert assistance with flow cytometry. We also wish to thank the personnel of the Murrayfield hospital who contributed by providing tissue specimens. 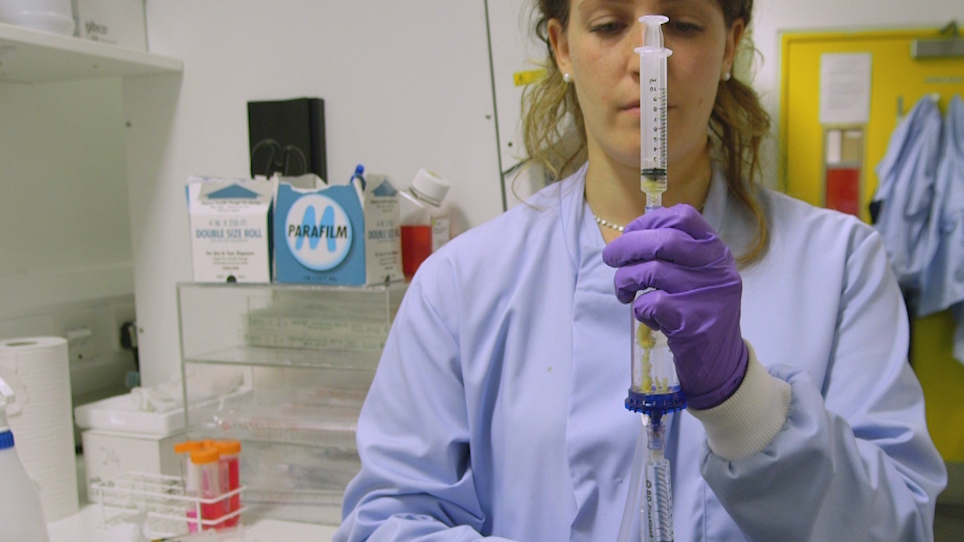