The field of fertility preservation has grown over the last two decades due to the increasing number of patients at risk of premature ovarian insufficiency (POI)1,2,3. The current available medical options to preserve fertility are ovarian tissue cryopreservation (OTC)4, oocyte/embryo freezing after ovarian stimulation5, administration of GnRH analogues6, or ovarian transposition7. OTC is a major advance for fertility preservation, particularly in prepubertal girls, where it is the only option currently available to preserve fertility and also in women who cannot delay the onset of their gonadotoxic treatment2,4.

OTC allows the preservation of a high number of primordial follicles, which are located in the outer 1 mm of the ovarian cortex2. Frozen/thawed ovarian tissue can be subsequently used by graft (orthotopic or heterotopic, autologous or donor) or cultured in vitro to obtain mature oocytes2. The graft of frozen-thawed prepubertal ovarian tissue samples has been shown to induce puberty8,9. In women, the reproductive outcomes after orthotopic autografting of frozen-thawed ovarian cortex are reassuring, with live birth rates reaching 57.5% after natural conceptions10 and between 30% to 70% after Assisted Reproductive Techniques (ART) conceptions11. Since the first live birth from orthotopic transplantation of frozen/thawed human ovarian tissue in 200412, this technique allowed the birth of at least 130 children worldwide2. The hormonal and reproductive functions of the graft tissue generally last for several years11,13,14, confirming its long-term functionality.

However, auto-transplantation of ovarian tissue samples carries a theoretical risk of reintroducing viable malignant cells in some patients15,16,17,18, particularly in leukemia survivors19. To date, no case of transmission of cancer via the graft of frozen/thawed ovarian cortex has been reported in healthy cancer survivors11, suggesting that the fibrous avascular nature of the ovarian cortex could represent an inhospitable microenvironment for the dissemination of malignant cells. Nevertheless, the graft of ovarian tissue still represents an experimental and challenging technique, indicating that the use of oocytes should be currently considered as an easier and safer approach than ovarian tissue graft to restore fertility. Interestingly, immature oocytes could be easily retrieved from ovarian tissue during OTC in both prepubertal girls and women16, suggesting that it could represent a reliable source to maximize the fertility-restoring potential in addition to ovarian cortical tissue freezing. These oocytes could be aspirated manually ex vivo in the ART laboratory from visible antral follicles or be isolated from spent media after ovarian tissue dissection. Retrieved oocytes could then be directly vitrified at an immature stage or be matured before the vitrification step using in vitro maturation (IVM)20,21.

All women (over 18 years of age) as well as all minor girls and their parents signed an informed consent form to preserve the fertility of the patient at risk of POI. This protocol is considered as a routine ART procedure in our center for fertility preservation. It follows the guidelines of our institutions human research ethics committee.

2. The day before the preservation 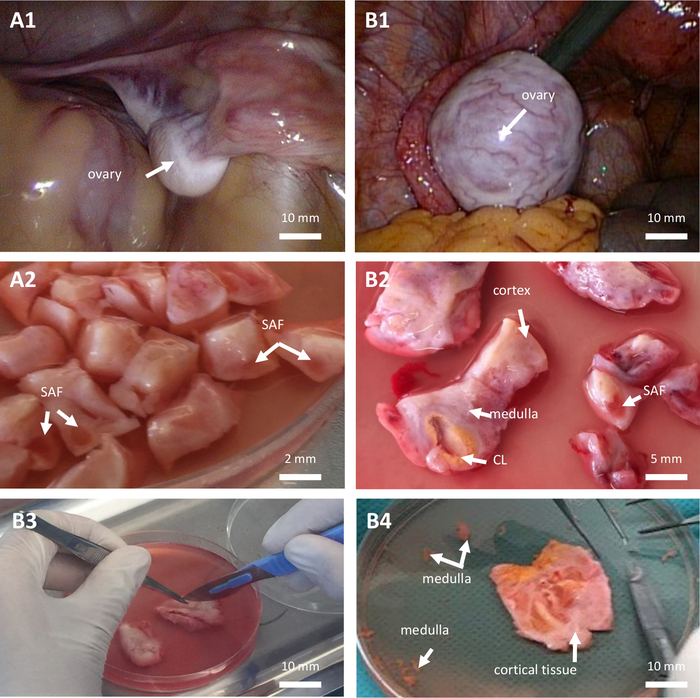 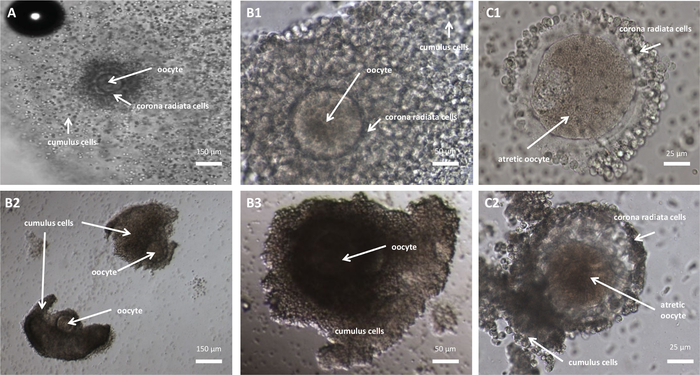 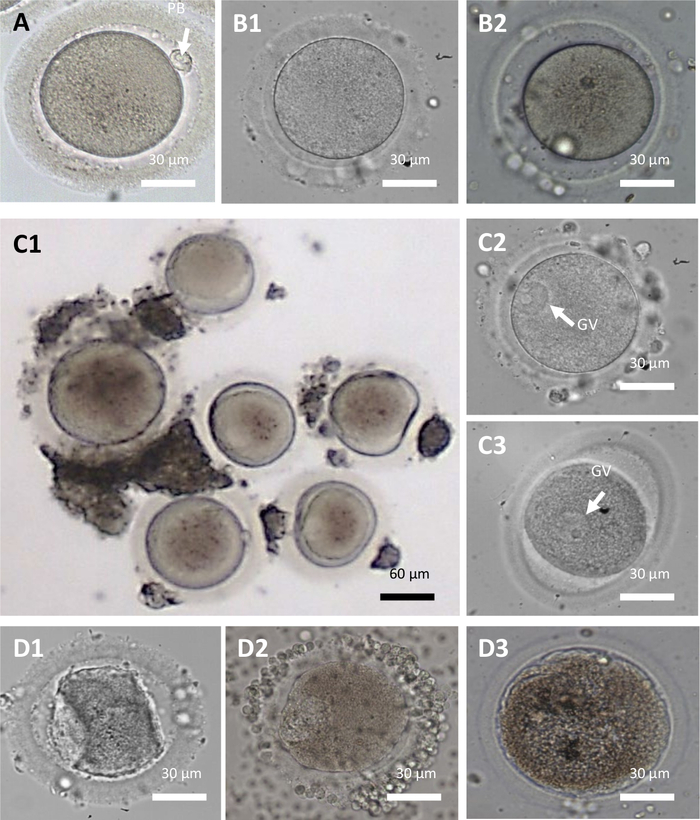 After fertility preservation, the majority of patients chose to continue the storage of ovarian tissue and oocyte samples (Supplementary Table 1). The main reason for fertility preservation destruction was patient death (9.30% (4/43) in prepubertal girls and 15.79% (6/38) in women). No request for use has so far been requested. The loss of follow up was 4.65% (2/43) in prepubertal girls and 10.53% (4/38) in women. 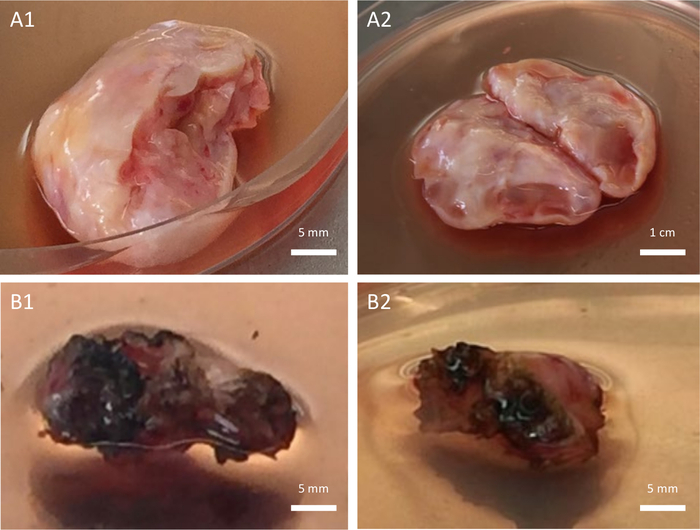 Figure 4: Ovarian tissue quality. Collected ovarian tissue of high quality (A1–A2) versus low quality (B1–B2). The low quality is due to the use of an inappropriate dissection device that had induced collateral injury to the ovarian tissue during oophorectomy. Please click here to view a larger version of this figure.

Figure 5: Low quality ovarian tissue. Collected ovarian tissue of low quality due to the negative impacts of (A) ovarian puncture after hormonal stimulation performed 2 days before OTC and (B) recent chemotherapy treatment administrated the week before OTC. Please click here to view a larger version of this figure.

Table 2: Proportion of patients who beneficiated from oocytes cryopreservation retrieved from ovarian tissue and biological parameters of cryopreserved oocytes.

The current manuscript provides a protocol combining ovarian tissue freezing and cryopreservation of oocytes retrieved from ovarian tissue, increasing the potential of fertility in prepubertal girls and women at risk of POI. We strongly recommend performing this protocol before the start of any gonadotoxic therapy in order to optimize the quantity (i.e., number of viable oocytes) as well as the quality (i.e., DNA integrity and cytoplasm competence) of the preserved oocytes, optimizing their safety for clinical use24. If it is not possible to perform this protocol before any form of gonadotoxic treatment, this protocol can also be conducted after the start of gonadotoxic therapy but an extreme caution is then advised when using these oocytes in ART, warranting specific precautions such as pre-implantation genetic testing (PGT), careful fetal monitoring, and amniocentesis16.

In the absence of a clear consensus on the amount of ovarian tissue that should be retrieved for fertility preservation, we recommend to perform complete oophorectomy in prepubertal girls as well as in patients associated with a moderate/high risk of POI or with a low ovarian reserve. Indeed, the volume of ovarian tissue collected during oophorectomy will be directly correlated to the number of oocytes that can be retrieved and then cryopreserved for the same patient. In our results, we observed that the numbers of retrieved oocytes were similar in partial oophorectomy compared to complete oophorectomy in women, but this result reflects the differences in ovarian reserve between the patients to whom we proposed partial oophorectomy (i.e., young patients associated with a high ovarian reserve and a low risk of POI) and those to whom we proposed total oophorectomy (i.e., older patients associated with a low ovarian reserve and a moderate/high risk of POI)16. To date, no significant harm of unilateral oophorectomy on long-term female fertility has been reported and the onset of menopause seems similar (or at worst perhaps 1 year earlier in human), probably due to a compensatory mechanism that lead to slower recruitment rate of primordial follicles11,25. Hence, there seems to be no significant negative effect of complete oophorectomy while it could allow the cryopreservation of a high number of oocytes, increasing the chances of having a live birth. Moreover, the use of cryopreserved oocytes by in vitro fertilization is much easier and safer than the graft of cryopreserved/thawed ovarian cortical tissue because of the risk of reseeding the disease of the patient is then avoided. Hence, this approach is particularly appropriate in blood or metastatic diseases associated with a risk of possible malignancy reseeding from transplanted ovarian tissue15,16,17,18, specifically in patients with leukemia19.

To date, slow freezing seems to give better results than vitrification for the cryopreservation of ovarian tissue samples but vitrification is clearly better for oocyte freezing26. These results explain why we choose to preserve the ovarian tissue with the slow freezing technique whereas retrieved oocytes were vitrified. We also choose to vitrify immature oocytes before any in vitro maturation (IVM) step because we hope that the performance of IVM will be significantly improved in future. At present, data is scarce on the optimal timing for oocyte vitrification (i.e., before or after IVM), preventing any conclusion on the most efficient strategy. Only one meta-analysis on this topic has been published in 201827, but it mainly concerns immature oocytes recovered after hormonal stimulation (and not oocytes retrieved from ovarian tissue) as well as it only evaluates oocyte maturation rate and no other clinical outcomes (such as fertilization rates, embryo development, or pregnancy/live birth rates). Moreover, the same IVM protocol was performed before and after the vitrification/thawing steps, excluding the impact of future advances in IVM protocols. As frozen oocytes for fertility preservation will not be used for several years or even decades in the case of prepubertal girls, progress will most certainly be made in IVM protocols in the coming years, giving hope for better results in terms of oocyte maturation rate as well as developmental/implantation potential.

Limited data is available on the developmental potential of oocytes derived from ovarian tissue after oophorectomy, specifically from prepubertal girls. Some studies reporting higher rates of atresia and abnormal morphology combined with a lower maturation potential16,28,29 in oocytes retrieved from prepubertal girls compared to women, whereas other publications describing similar characteristics are reference16,24,30,31,32,33,34,35. To the best of our knowledge, there is no report of pregnancy after IVM of oocytes frozen during childhood or adolescence. In women, clinical pregnancy rates and neonatal morbidity seem similar after IVM compared to standard IVF/ICSI36. Further reports are warranted on the fertility-restoring potential of oocytes retrieved from ovarian tissue, specifically in prepubertal patients.

None of the authors have competing interests.