The turnover rate of viruses in marine and freshwater systems can be estimated by a reduction and reoccurrence technique. The data allow researchers to infer rates of virus-mediated microbial mortality in aquatic systems.

Viruses are pervasive components of marine and freshwater systems, and are known to be significant agents of microbial mortality. Developing quantitative estimates of this process is critical as we can then develop better models of microbial community structure and function as well as advance our understanding of how viruses work to alter aquatic biogeochemical cycles. The virus reduction technique allows researchers to estimate the rate at which virus particles are released from the endemic microbial community. In brief, the abundance of free (extracellular) viruses is reduced in a sample while the microbial community is maintained at near ambient concentration. The microbial community is then incubated in the absence of free viruses and the rate at which viruses reoccur in the sample (through the lysis of already infected members of the community) can be quantified by epifluorescence microscopy or, in the case of specific viruses, quantitative PCR. These rates can then be used to estimate the rate of microbial mortality due to virus-mediated cell lysis.

TFF represents an alternative approach to the viral reduction method.

The raw data collected by the researcher requires minimal mathematical processing to generate reoccurrence rates of virus abundance. The primary data set resulting from this study is the reoccurrence rates of virus abundance in the subsamples from the incubations. These results form independent regressions of virus abundance vs time for each of the samples. For each sample the individual incubations act as one treatment, so by completing three replicate-incubations the researcher can calculate rates as well as an estimate of variation (e.g., standard deviation) (see Figure 1.)

One caveat of this process is that the reduction in virus abundance invariable leads to a reduction in the host cells in the sample that are carrying the virus burden. To offset this loss, enumeration of bacterial abundance from both the source (unfiltered seawater or lake water) and the T = 0 incubation sample are necessary. This information can be used to account for the percentage of cells lost: assuming that the process of reducing virus abundance is not selective for or against any members of the microbial community, this factor can then be used to estimate the in situ production rate of viruses. 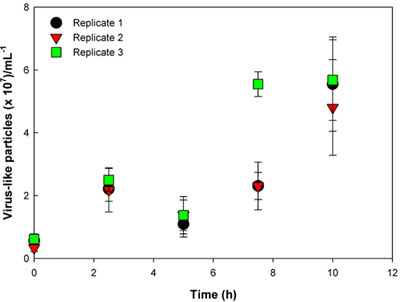 Figure 1. The production of virus-like particles over a 10 hour incubation at in situ conditions using epifluorescence microscopy. Samples were collected during a phytoplankton bloom off the coast of New Zealand in September of 2008. 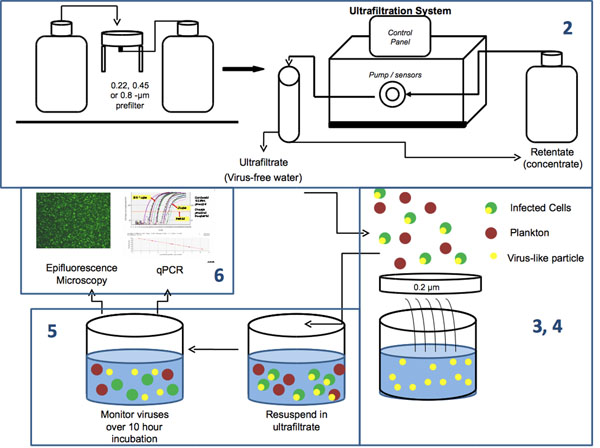 Figure 2. Schematic diagram of the work flow process for assaying virus production. The process starts with the ultrafiltration of sample water to generate virus-free water. This is completed using an ultrafiltration system. In parallel water samples are collected from the same site and the free viruses passed through a filter while the microbial community (containing a mixture of infected and non-infected cells) is retained. This community is then resuspended in the virus free water and incubated under in situ conditions. The reoccurrence rate of viruses is then monitored for the next 10 hours to determine rates of virus production.

A critical component in the understanding how viruses influence marine microbial communities is to determine the rate at which virus particle are produced. Given that abundances are (more or less) static in most systems (Wilhelm & Suttle 1999, Weinbauer 2004), and that viruses are removed or rendered non-infectious quickly in aquatic systems (Wilhelm et al. 1998), then production rates must be relative rapid to replace lost particles.

Estimating the mortality viruses cause to the microbial community requires a knowledge of how many viruses are produced every time a virus lyses a cell (the "burst size"). Virus burst sizes in natural samples can vary greatly. Burst sizes can be determined directly by transmission electron microscopy (e.g., Weinbauer & Peduzzi 1994), but this is often beyond the capabilities of a given laboratory or not always practical. In situations where they cannot be empirically determined, literature values of 24 viruses per lytic event may be used for marine systems and 34 for freshwater systems (Parada et al. 2006). If the rate of virus production is divided by this number, the result is the abundance of cells per volume destroyed by viruses on a daily basis. The microbes lysed value can then be divided by the standing stock of bacterial abundance resulting in the virus induced mortality for the system in question: existing estimates range from few percent to nearly the entire population and are often dependent on other factors in the system in question (Wilhelm & Matteson 2008). To determine the percentage of total mortality this number is often multiplied by two (working from the assumption that 50% of the cells go on to reproduce and 50% of the cells are lost, Weinbauer 2004).

Given that nutrient and trace element bioavailability (e.g., N, P, Fe) can limit the rate of primary productivity, and as such carbon flux, through aquatic systems, and understanding of the role of virus-driven microbial mortality in this process has become of interest to marine geochemists. Several estimates now exist that suggest viruses release a significant concentrations of nutrient elements back to the water column on a daily basis (Rowe et al. 2008, Higgins et al. 2009) and that these elements are rapidly assimilated by the microbial community (Poorvin et al. 2004, Mioni et al. 2005). The rate of nutrient flux to the environment can be determined by multiplying the number of cells destroyed by the amount of nutrient per cell (denoted "quotas"). This information can provide a critical component to our understanding of how microbial food webs function across aquatic systems.

Ongoing developments: Current efforts by a series of research groups involve adapting the above strategy to enumerate specific viruses within the community and, as such, to determine how specific organisms are influenced by virus activity. To do this researchers use the quantitative polymerase chain reaction (qPCR) to estimate the abundance of specific viruses groups or families in parallel to the estimates of the total virus community. The results are then directly applied to provide estimates of virus mortality, nutrient turnover, etc for specific plankton groups. This powerful new approach will allow researchers in the coming years to dig much more deeply into processes associated with the ecology of viruses and, for the first time, to quantify the interactions of specific virus-host communities beyond the constraints of laboratory systems.

The publication of this article was supported by a grant from the Office of Research at the University of Tennessee. The authors thank the previous generation of students and researchers that have worked to refine these procedures. Research was supported by grants from the National Science Foundation (NSF-0851113, NSF-0825405 and NSF-0550485).