A goal of behavioral neuroscience is to identify underlying neurobiological factors that regulate specific behaviors. Using animal models to accomplish this goal, many methodological strategies require invasive techniques to manipulate the intensity of the behavior of interest (e.g., lesion methods, pharmacological manipulations, microdialysis techniques, genetically-engineered animal models). The utilization of a comparative species approach allows researchers to take advantage of naturally occurring differences in response strategies existing in closely related species. In our lab, we use two species of the Peromyscus genus that differ in paternal responses. The male California deer mouse (Peromyscus californicus) exhibits the same parental responses as the female whereas its cousin, the common deer mouse (Peromyscus maniculatus) exhibits virtually no nurturing/parental responses in the presence of pups. Of specific interest in this article is an exploration of the neurobiological factors associated with the affiliative social responses exhibited by the paternal California deer mouse. Because the behavioral neuroscience approach is multifaceted, the following key components of the study will be briefly addressed: the identification of appropriate species for this type of research; data collection for behavioral analysis; preparation and sectioning of the brains; basic steps involved in immunocytochemistry for the quantification of vasopressin-immunoreactivity; the use of neuroimaging software to quantify the brain tissue; the use of a microsequencing video analysis to score behavior and, finally, the appropriate statistical analyses to provide the most informed interpretations of the research findings. 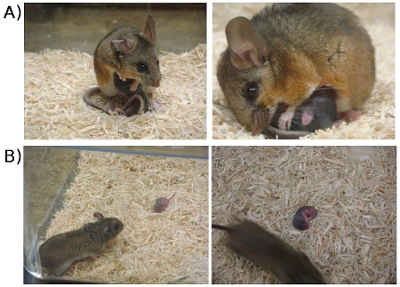 Figure 1: (A) Male California mice exhibiting paternal responses toward conspecific alien pup. (B) Male deer mouse exhibiting a cautious approach (stretch attend) and avoidance response in the presence of a conspecific alien pup. Note: In these social interaction assessments, if a male exhibits aggressive responses toward the pup, the experimenters immediately hit the top of the cage to distract the male. At this time the session is terminated and the pup is removed, inspected for any wounds and returned to the mother. In our laboratory, this rarely is observed with P. californicus males but is occasionally observed with P. maniculatus; close observation and immediate intervention, however, prevent harm from occurring to the animals. 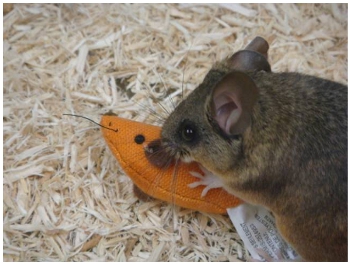 Figure 2: A California mouse interacting with a toy mouse; most tried to chew on these stimuli.

Figure 3: Experimental design of study; there were approximately 6 animals in each group for each species. 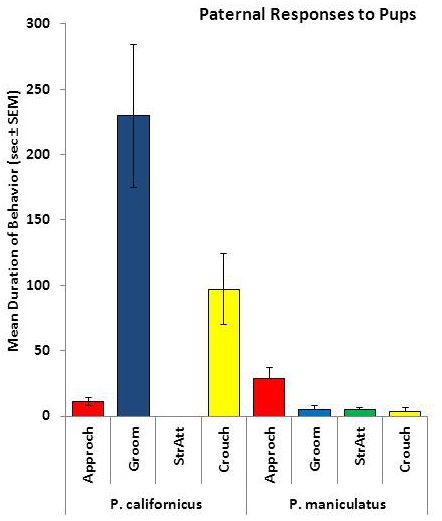 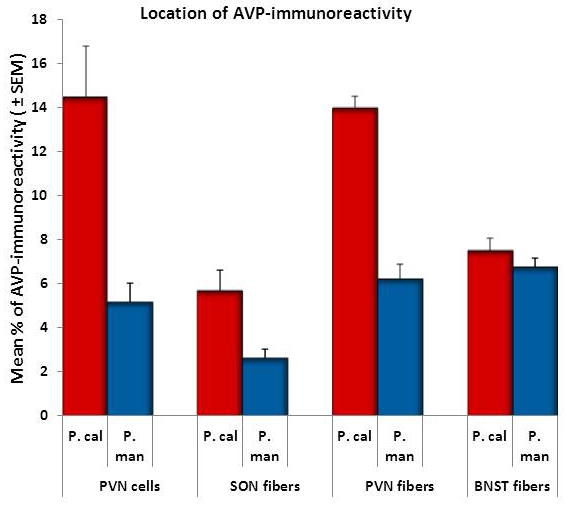 Figure 6. Vasopressin immunoreactivity in various brain areas of both species. The California mice had more staining in the PVN cells and fibers. 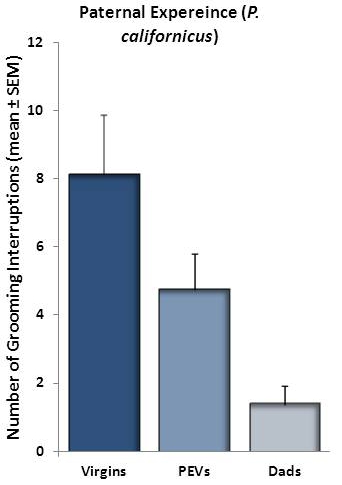 Figure 7: Paternal California mice exhibited fewer disruptions in their grooming sequences in the presence of a predator odor than the pup-exposed and virgin groups.

This article discusses three essential components thought to be critical for the successful execution of behavioral neuroscience investigations: (1) a representative and valid animal model; (2) an accurate and sensitive immunocytochemistry protocol; and (3) the most analysis (observational and statistical) of both the behavioral and brain data. Mistakes in a single category will most certainly compromise the results of the entire study. Hence, after carefully selecting the appropriate animal model, considerable effort should be directed toward pilot testing the behavioral and histological procedures to assure that the behavior will be reliably observed in the study, followed by the successful processing of the brains.

As mentioned earlier, the use of comparative species to identify neurobiological mechanisms of a particular response is a valuable methodological approach because this technique doesn't require genetic engineering or painful surgical manipulations. Thus, this methodological approach utilizes less threatened, intact animals. The use of natural variations of animals, however, is strengthened by the incorporation of natural-like environments even if the animals are housed in the laboratory. Further, if laboratory studies can be extended to the field to further validate the authenticity of species differences in the behavior of interest, this next step is recommended. Although the comparative approach offers many advantages, a limitation is the correlative nature of the data; consequently, additional techniques such as pharmacological manipulations should be used to further validate the role of targeted neurobiological systems in the behavior of interest.

Once the experimenters feel confident about the behavioral, histological and statistical procedures, care should be taken so that the living conditions of the animals remain constant for all groups except, of course, for the experimental manipulation. Changes in variables such as light schedules, noise levels, caretakers, humidity levels and odors in the laboratory could have significant effects on the animals' neurobiological responses.

In this article the primary antibody was used for the detection of vasopressin but other primary antibodies can be used for a plethora of different neurochemicals of interest. If the experimenter is working with a new antibody, it is important to conduct titration studies to determine the optimal dilution of the new antibody. Many times too much antibody is used (as suggested by the vendor), resulting in tissue that is too dark to differentiate the signal; further, excessive use of the antibody is very expensive.

Finally, if more than a single statistical analysis can be used to provide alternate views and interpretations of the data, they should be utilized. In this particular study, general linear models, correlational, and multidimensional scaling analyses were used to provide the most informative views of the data.

This research was funded by grant no. 0723341 (to KGL) from the National Science Foundation. We are also grateful for contributions provided by the Schapiro Undergraduate Research Fellowship program and the Psychology Department at Randolph–Macon College. Finally, we appreciate Craig Kinsley’s collaborative contributions in this research and Amanda Rzucidlo’s help in preparing the R-MC laboratory for this video article.