This video demonstrates the procedures used to grow primary cultures of embryonic Xenopus nerve and muscle cells and the usefulness of this preparation for making simultaneous pre- and post-synaptic patch clamp recordings.

Much information about the coupling of presynaptic ionic currents with the release of neurotransmitter has been obtained from invertebrate preparations, most notably the squid giant synapse1. However, except for the preparation described here, few vertebrate preparations exist in which it is possible to make simultaneous measurements of neurotransmitter release and presynaptic ionic currents. Embryonic Xenopus motoneurons and muscle cells can be grown together in simple culture medium at room temperature; they will form functional synapses within twelve to twenty-four hours, and can be used to study nerve and muscle cell development and synaptic interactions for several days (until overgrowth occurs). Some advantages of these co-cultures over other vertebrate preparations include the simplicity of preparation, the ability to maintain the cultures and work at room temperature, and the ready accessibility of the synapses formed2-4. The preparation has been used widely to study the biophysical properties of presynaptic ion channels and the regulation of transmitter release5-8. In addition, the preparation has lent itself to other uses including the study of neurite outgrowth and synaptogenesis9-12, molecular mechanisms of neurotransmitter release13-15, the role of diffusible messengers in neuromodulation16,17, and in vitro synaptic plasticity18-19.

Figure 4B shows the dorsal view of an isolated spinal cord/myotome immediately after its removal from a stage 22 Xenopus embryo. Figure 4C shows that, after skin removal and incubation in Ca2+-Mg2+-free solution (CMF, solution (c)), cells dissociate into a "sand pile" and are ready for plating. Immediately after plating into culture medium cells exhibit little morphological variability (Figure 5B) but take on distinct shapes after twenty-four hours in culture. Muscle cells become spindle-shaped while neurons remain spherical whilst extending neurites that elaborate varicosites at synapses with muscle cells (Figure 6). Simultaneous paired patch recording from the presynaptic varicosity and postsynaptic muscle cell (Figure 7) reveals the presynaptic inward and outward currents associated with the release of neurotransmitter and the resultant excitatory postsynaptic currents.

Figure 1. A: Breeding pair of frogs in mating bucket atop screen. B: Frogs in amplexus with fertilized eggs. 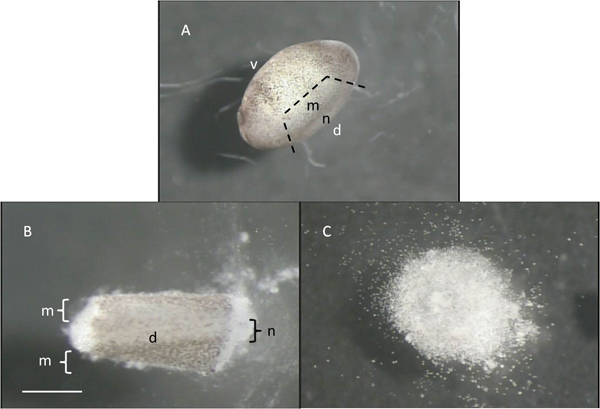 Figure 4. A: Stage 22 embryo with a dashed line indicating to-be dissected portion. B: Acutely isolated dorsal portion of embryo; "d" and "v" refer to the dorsal and ventral aspects of the embryos, while "m" and "n" indicate the approximate locations of the mytomes and neural tube. C: "Sand pile" of cells after 60 min in CMF. Scale bar represents 1 mm for A, and 0.5 mm for B and C.

Figure 5. A: 5x power view of cells in culture immediately after plating. B: Same culture at 40x. Scale bar represents 40 μm for A, and 5 μm for B. 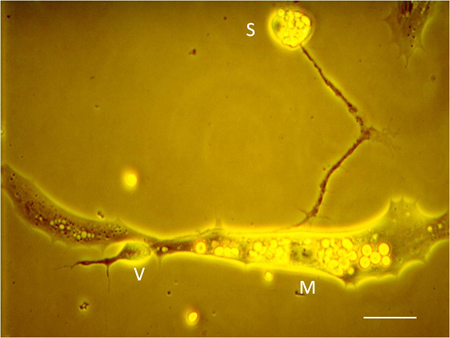 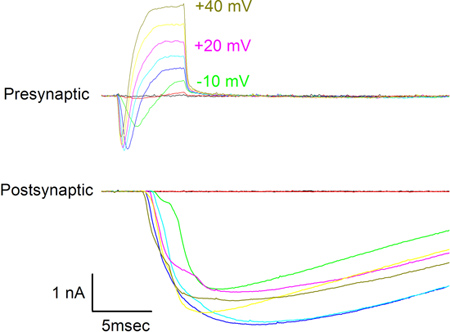 Figure 7. Presynaptic (top) and postsynaptic (bottom) currents seen in response to application of 10 mV incremental voltage steps presented to the presynaptic varicosity from -30 mV to +40 mV. Voltage steps are indicated next to some of the presynaptic traces. The holding potential for both cells was -70 mV.

Key steps in the successful co-culturing of motoneurons and muscle cells are the use of appropriately staged embryos produced from the induced breeding of Xenopus frogs, and the careful aseptic dissection of the undifferentiated spinal neurons and myoblasts. Fertilized eggs should be left undisturbed until they reach approximately stage 10 or so as moving them sooner often halts their development. Healthy embryos are identified by a smooth appearance and a brown and white mottled coloring. Stage 22-24 embryos are the most useful because this is the point during development just after the neural tube closes and before the myocytes have differentiated significantly. In addition, cells from older embryos fail to dissociate well in CMF. Care should be taken when removing the vitelline membrane as it adheres strongly to the embryo. The membrane should be torn apart using sharp forceps so that the embryo emerges intact. Another important precaution is to carefully place the cells onto the bottom of the culture dish (rather than letting them settle there). This method is preferred as this increases the likelihood that the cells will adhere to the culture dish.

Functional neurotransmission between nerve and muscle can be determined with just postsynaptic recording and often can be ascertained by the observation of spontaneous muscle contraction after innervation. Un-innervated muscle cells do not twitch in culture. Postsynaptic recording alone is useful for recording miniature endplate currents or potentials but measurements of evoked release requires presynaptic stimulation, and correlation of pre- and postsynaptic currents requires double patch-clamp.

Besides the paired-patch recording method described here, this preparation offers the opportunity to introduce a third pipette at the neuronal soma5 This allows the generation of an action potential that can propagate to the presynaptic varicosity and lead to the release of neurotransmitter. In addition, putative agents that are thought to mediate or modulate synaptic transmission can be introduced to either side of the synapse: via the muscle cell pipette or through diffusion from a third pipette placed at the soma.